Obama should be proud to be named Hussein

The attacks on Barack Obama's middle name have begun, but the likely Democratic nominee joins a long line of famous Americans with Semitic names, from Benjamin Franklin to Omar Bradley. 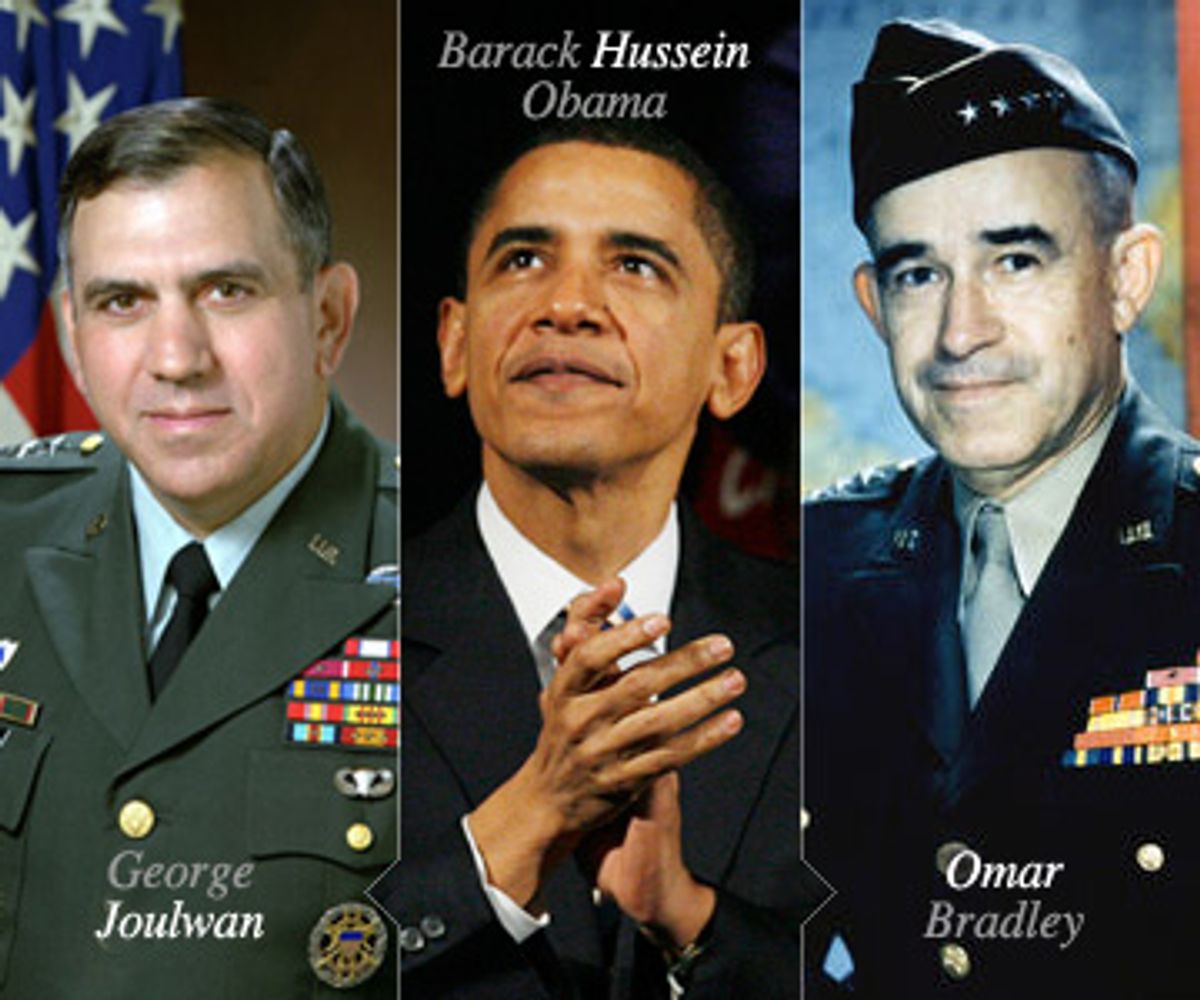 In Cincinnati, Bill Cunningham, according to the Los Angeles Times, introducing presidential candidate John McCain at a rally Tuesday, "ridiculed Democratic contender Barack Obama for his intention to meet with 'world leaders who want to kill us' and pointedly referred to the Illinois senator as 'Barack Hussein Obama.'" John McCain repudiated Cunningham's low tactics and said that using the middle name like that three times was "inappropriate" and would never happen again at one of his rallies.

I want to say something about Barack Hussein Obama's name. It is a name to be proud of. It is an American name. It is a blessed name. It is a heroic name, as heroic and American in its own way as the name of Gen. Omar Nelson Bradley or the name of Benjamin Franklin. And denigrating that name is a form of racial and religious bigotry of the most vile and debased sort. It is a prejudice against names deriving from Semitic languages!

Barack and Hussein are Semitic words. Americans have been named with Semitic names since the founding of the republic. Fourteen of our 43 presidents have had Semitic names (see below). And American English contains many Arabic-derived words that we use every day and without which we would be much impoverished. America is a world civilization with a world heritage, something Cunningham will never understand.

Barack is a Semitic word meaning "to bless" as a verb or "blessing" as a noun. In its Hebrew form, barak, it is found all through the Bible. It first occurs in Genesis 1:22 -- "And God blessed (ḇāreḵə) them, saying, Be fruitful, and multiply, and fill the waters in the seas, and let fowl multiply in the earth."

Here is a list of how many times barak appears in each book of the Bible.

Now let us take the name "Hussein." It is from the Semitic word hasan, meaning "good" or "handsome." Husayn is the diminutive, affectionate form.

Barack Obama's middle name is in honor of his grandfather, Hussein, a secular resident of Nairobi, Kenya. Americans may think of Saddam Hussein when they hear the name, but that is like thinking of Stalin when you hear the name Joseph. There have been lots of Husseins in history, from the grandson of the prophet Mohammed, a hero who touched the historian Gibbon, to King Hussein of Jordan, one of America's most steadfast allies in the 20th century. The author of the beloved American novel "The Kite Runner" is Khaled Hosseini.

But in Obama's case, it is just a reference to his grandfather.

It is worth pointing out that John McCain's adopted daughter, Bridget, is originally from Bangladesh. Since Hussein is a very common name in Bangladesh, it is entirely possible that her birth father or grandfather was named Hussein. McCain certainly has Muslim relatives via adoption in his family. If Muslim relatives are a disqualification from high office in the United States, then McCain himself is in trouble. In fact, since Bridget is upset that George W. Bush doesn't like her "because she is black," and used her to stop the McCain campaign in South Carolina in 2000, you understand why McCain would be especially sensitive to race baiting of Cunningham's sort. The question is how vigorously he will combat it; he hasn't been above Muslim taunting in the campaign so far. (And the McCains really should let Bridget know that she is Asian, not "black." The poor girl; Bush and Rove have done a number on her, and Cindy's confusion can't help.)

The other thing to say about grandfathers named Hussein is that very large numbers of African-Americans probably have an ancestor 10 or 11 generations ago with that name, in what is now Mali or Senegal or Nigeria. And since so many thousands of Arab Muslims were made to convert to Catholicism in Spain after 1501, many Latinos have distant ancestors named Hussein, too. In fact, since there was a lot of Arab-Spanish intermarriage, and since there was subsequent Spanish intermarriage with other European Catholics, more European Americans are descended from a Hussein than they realize. The British royal family is quite forthright about the Arab line in its ancestry going back to Andalusia.

Obama, being a cousin of Dick Cheney on one side and having relatives in Kenya on the other, is just more and more typical of the 21st century United States.

So, anyway, Obama's first two names mean "blessing, the good." If we are lucky enough to get him for president, we can only hope that his names are prophetic for us.

Which brings me to Omar Bradley. Omar is an alternative spelling of Umar, i.e., Umar ibn al-Khattab, the second caliph of Sunni Islam. Presumably Gen. Bradley was named for the poet Omar Khayyam, who bore the caliph's name. Omar Khayyam's "Rubaiyat," in the "translation" of Edward FitzGerald, became enormously popular in Victorian America.

Gen. Omar Bradley, who bore a Semitic, Muslim first name, and shared it with the second caliph of Sunni Islam, was the hero of D-day and Normandy, of the Battle of the Bulge and the Ruhr.

Would Cunningham see Omar Bradley as un-American, as an enemy because of his name?

What about other American heroes, such as Gen. George Joulwan, former NATO supreme allied commander of Europe? "Joulwan" is an Arabic name. Or there is Gen. John Abizaid, former CENTCOM commander. Abizaid is an Arabic name. Abi means Abu or "father of," and Zaid is a common Arab first name. Is Cunningham good enough to wipe their shoes? Is he going to call them traitors because they have Arabic names?

I won't go into all the great Americans with Arabic names in sports, entertainment and business, against whom Cunningham would apparently discriminate on that basis. Does he want to take citizenship away from Kareem Abdul Jabbar (meaning "noble the servant of the Mighty") and Ahmad Jamal (meaning "the most praised, beauty")? What about Rihanna ("sweet basil," "aromatic")? And Tony Shalhoub (i.e., Mr. Monk)?

Let us take Benjamin Franklin. His first name is from the Hebrew Bin Yamin, the son of the Right (hand), or the son of strength, or the son of the South (yamin or right has lots of connotations). The "Bin" means "son of," just as in modern colloquial Arabic. Bin Yamin Franklin is not a dishonorable name because of its Semitic root. By the way, there are lots of Muslims named Bin Yamin.

As for an American president bearing a name derived from a Semitic language, that is hardly unprecedented.

John Adams really only had Semitic names. His first name is from the Hebrew Yochanan, or gift of God, which became Johan and then John. (In German and in medieval English, "y" is represented by "j" but was originally pronounced "y.") Adams is from the biblical Adam, which also just means "human being." In Arabic, one way of saying "human being" is "Bani Adam," the children of men.

Thomas Jefferson's first name is from the Aramaic Tuma, meaning "twin." Aramaic is a Semitic language spoken by Jesus, which is related to Hebrew and Arabic. In Arabic, twin is tau'am, so you can see the similarity.

James Madison, James Monroe and James Polk all had a Semitic first name, derived from the Hebrew Ya'aqov or Jacob, which is Ya'qub in Arabic. It became Iacobus in Latin, then was corrupted to Iacomus, and from there became James in English.

Zachary Taylor's first name is from the Hebrew Zachariah, which means "the Lord has remembered."

Abraham Lincoln, of course, is named for the patriarch Abraham, from the Semitic word for father, Ab, and the word for "multitude," raham. Abu, "father of," is a common element in Arab names today.

So, Mr. Cunningham, Barack Hussein Obama fits right in this list of presidents with Semitic names. In fact, we haven't had one for a while. We are due for another one.

A blessed and good one.