In 2004, Nader asked McCain to help his campaign -- and the senator rushed to his side. Is the consumer advocate now returning the favor? 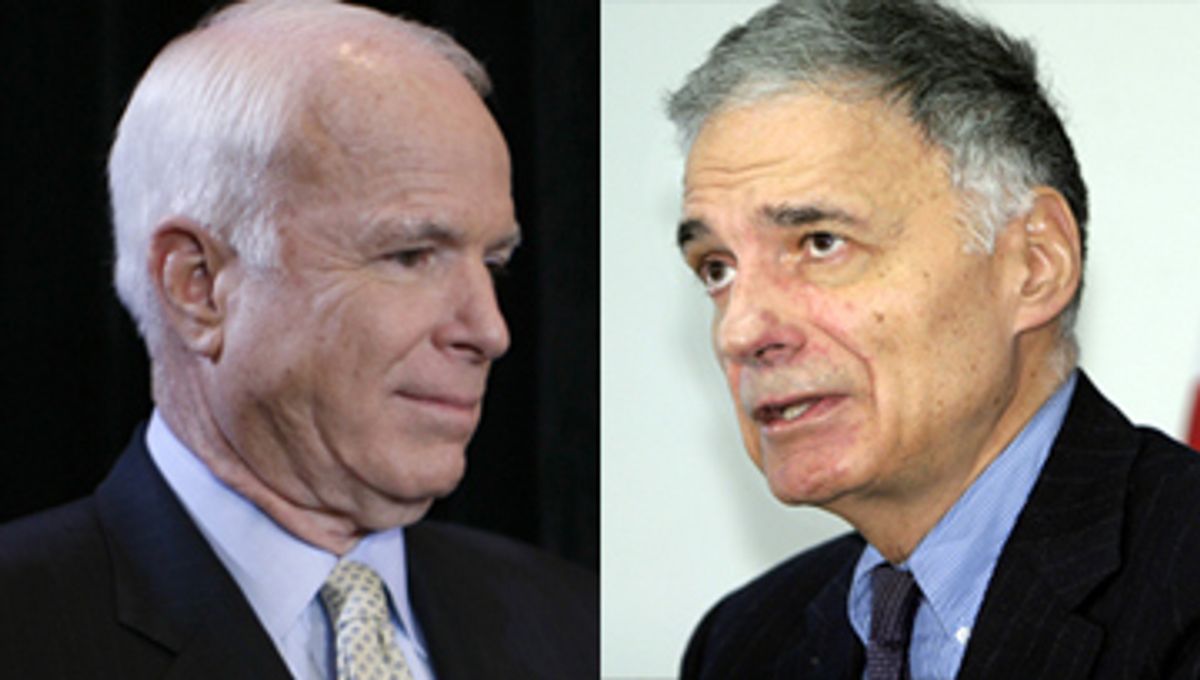 Irritated Democrats -- and everyone else who feels that we have heard more than enough from Ralph Nader -- cannot help wondering why he would be running for president yet again, at the risk of becoming a permanent national joke. Is he stroking his own ego, as some critics complain? Is he motivated by principle to offer voters a different choice, as he will insist? Both those explanations may still be plausible, although between 2000 and 2004 his support fell from 3 percent to 0.3 percent, which is not exactly an ego boost nor an endorsement of third-party politics. Even in 2000, when he made his strongest (and most disastrous) showing, he fell far short of his own 5 percent target.

But the evidence suggests another possible motive for Nader to run this year -- namely, that he hopes to help his longtime ally John McCain, to whom he owes at least one big favor. Nader is already focusing his fire on the Democrats, with his Web site featuring dozens of press releases attacking Hillary Clinton and Barack Obama, while none voice the slightest criticism of McCain. In his latest round of television appearances, Nader trained his fire directly on Obama.

Nader's proclivity to boost Republicans and blast Democrats has been a matter of historical record ever since the Florida debacle eight years ago, when his 97,000 votes probably deprived Al Gore of victory in that crucial state. Although the consumer advocate and his supporters continue to deny any such culpability, Republicans clearly feel that his presence on the ballot works to their advantage. As Mike Huckabee noted on hearing of Nader's impending announcement last week, a Nader candidacy tends to siphon votes away from the Democratic presidential nominee. "So naturally," said Huckabee bluntly, "Republicans would welcome his entry into the race."

Actually, Republicans have learned to do more than merely "welcome" Nader. Four years ago, Republican officials and activists in certain swing states helped gather signatures to gain ballot access for Nader, while several major Republican donors sent generous checks to his campaign. And no Republican spoke out more forthrightly on his behalf than McCain, who in 2004 urged the authorities in Florida to put Nader on the ballot there despite his failure to qualify -- and who sent his own lawyer down to the Sunshine State to fight for Nader in court.

McCain launched that intervention from his perch as chairman of the Reform Institute, a Washington think tank funded by corporate soft money and liberal foundations and staffed by McCain staffers and partisans. On the surface, at least, the Arizona senator was pursuing a principled defense of open ballot access, and he recalled how establishment Republicans had used legal technicalities to block him from the New York primary ballot in 2000. He sent Trevor Potter, a prominent attorney and former Federal Election Commission member who has long represented him, to assist the Nader forces in Tallahassee. It was an inspiring story of shared democratic values that crossed the ideological spectrum.

But as the New York Times reported on Sept. 17, 2004, there was a political back story behind McCain's assistance to Nader. According to the Times, "Mr. Potter said that the Nader campaign first sought Mr. McCain's backing in the case last week and that subsequently the Bush campaign also asked him to get involved." (Candidate Nader and his running mate, Peter Camejo, issued a statement thanking McCain and the Reform Institute that is for some reason no longer available on the Nader campaign Web site.)

That tantalizing sequence of events suggests McCain's motive in backing Nader may well have been partisan as well as principled, since the "maverick" senator had only weeks earlier sworn his fealty to George W. Bush on the dais at the Republican National Convention. Certainly the Bush campaign would have felt reassured knowing that Nader would be on the ballot again in Florida, like a lucky rabbit's foot.

The Naderite connections with McCain go back many years to the era when the Arizona senator displayed real maverick tendencies in jousting with corporate interests in the tobacco, telecommunications and automobile lobbies, as well as his strong support for campaign finance reform. Nostalgia for the old McCain may explain why Joan Claybrook, who directs the Nader-founded Public Citizen organization, stepped forward to defend him against the Times exposé of his relationship with lobbyist Vicki Iseman. Meanwhile Claybrook, Nader and other reformers have said little or nothing about McCain's gaming of the public campaign finance system while voicing sharp criticism of Obama for waffling recently on his commitment to accept public financing.

Nader may occasionally tweak McCain over the war in Iraq or the Canadian healthcare system, but they both know that that won't matter. Watch while Nader blisters Obama or Clinton and McCain smiles. Wait to see whether McCain tries to insist that Nader, whose support is minuscule and shrinking, deserves to appear on the debate dais with him and the Democrat. Look for Republicans to prop up Nader with ballot signatures and campaign cash. And remember that this time Nader's candidacy, having descended from tragedy to farce, may simply be an inside joke.