Welcome to the nuthouse

The first weeks of my daughter's life aren't going exactly as planned. Especially the part where I am losing my freaking mind. 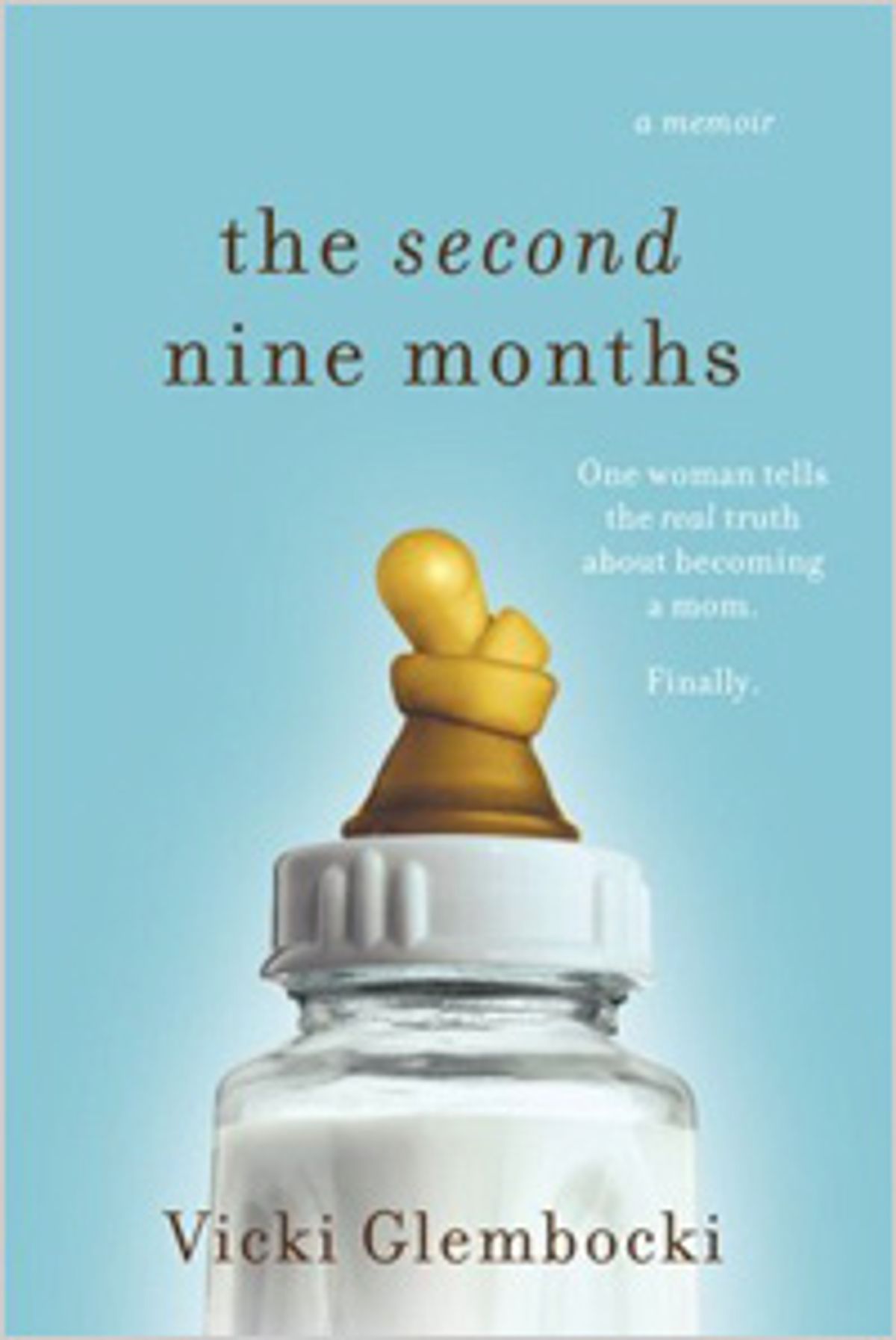 Two weeks after the baby is born, I push the stroller down a street I've never been on before. This is the first walk the baby and I are taking together. There is probably a line in the baby book my mother gave me, the one that's still in its plastic box in one of the many piles on our dining room table, where I'm supposed to document this moment -- First Walk in Stroller. Taking this walk is supposed to be relaxing. "The Girlfriend's Guide to Surviving the First Year of Motherhood" said so: "Get out and get fresh air ... it does wonders for your spirit." My spirit is supposed to be inhaling the warm, late March air, feeling invigorated while I maternally point out the many things the baby is seeing for the first time. The buds on the maple trees. The trail from an airplane. The tabby cat sunning itself on the back stoop of the white house we just passed. But I'm not. Because the baby is crying.

I shift the angle of the canopy, in case the sun's shining in her eyes.

I reach down the back of her neck, under the cotton blanket she's swaddled in, under her lavender one-piece bodysuit with the yellow butterfly on it so I can finger the tag, in case there's a plastic price-tag holder sticking out of it. Or an open safety pin. Or a pickax. There's nothing.

No matter what I do, she keeps crying.

What I should do is turn the stroller around. I should not be in public. I should go home. But I can't go home. Because, a block away, there is a Laundromat, and in that Laundromat are the quilt from our bed and the afghan from our couch, tumbling in an industrial dryer, a task that was on my "List of Things to Do Before the Baby Comes" because the quilt and afghan -- too large for our washer and dryer -- had fused with zillions of sharp, blond, burrowing dog hairs, discarded by Levi, our 80-pound Lab, that I was certain would break free, lodge in the baby's throat and choke her. I need to finish this job. I have two hours between each nursing, so there's time to finish this job. I pat along the sides of the baby's swaddle to make sure her fingers aren't bent the wrong way. I tuck the blanket under her feet, in case her feet are cold.

What am I doing wrong?

I pull out my cell phone and dial Thad's office line.

"What happened?" he asks. I hear the wheels on his office chair roll across the floor and his door close. I tell him about the afghan and the Laundromat and the crying. About how I can't stop the crying.

"Maybe you just tried to do too much, sweetie. Maybe you should just go home," he says in his new mellow tone, the one he's been using in the middle of the night for the past two weeks, every time I nudge him awake and declare that I'm certain the baby is dead.

"She's not dead," he always says, calm and patient, just like he was when I woke him up with the same worry 13 seconds before.

"How do you know that?" I always ask.

"How do you know?" And Thad flips the covers onto me, staggers over to the Pack 'n Play at the foot of our bed, and leans over so his cheek is next to Blair's tiny mouth, waiting until he feels a few bursts of warm air.

"She's not dead," he whispers, climbing back into bed. I always lie there for a few seconds. Then I get up and check myself, resting my hand lightly on Blair's chest, swaddled so tight I wonder if the receiving blanket is the only thing holding her fragile body together, until I feel it rise, up and down, up and down.

Now, though, in the light of day, his soothing "everything's okay" tenor makes me clamp my teeth together, as if he didn't just suggest I go home but instead told me to do the very opposite, to suck it up, to finish the damn bedspreads, and then make a meatloaf.

"I can't go home, Thad," I yell. "The bedspreads are in the fucking dryer and I am on the fucking street behind the fucking pizza shop and the baby won't stop fucking crying and I'm losing my fucking mind!"

I don't know what to do.

Wasn't that whole maternal-instinct thing supposed to stick around after that first night in the hospital? Wasn't some maternal gene supposed to switch on and keep me all stoned on bliss and beaming at this child like she is pure light? Like she is the sun? Like, by having her, my life has finally begun and I am finally complete? Isn't that what everyone says at the end of "A Baby Story"? Isn't that what my mother meant when she told me labor was "wonderful pain"? Because I'm not feeling wonderful. In these two weeks since we left the hospital, my emotional range seems to have collapsed in on itself, trapping me in a hole where I feel only overwhelmed. And frustrated. And afraid.

I'm terrified, really. Terrified that Thad and I have made a horrible, terrible mistake by having this baby. And I want to tell Thad, explain it to him. But that scares me, too. He won't understand. How could he? He's too busy wondering where his wife went. Where is the woman who was so tickled when the plus sign appeared on the pregnancy test that she immediately wrapped it in blue tissue paper with a red bow and express-mailed it to her parents? Where is the woman who lay beside him in bed every Saturday morning, propped up on pillows, reading aloud from the latest chapter in "Your Pregnancy Week by Week"? Where is the woman he took a photo of less than a month ago as she sat at a card table in the kitchen, carefully hot-gluing little plastic toys to a mirror frame to hang in the baby's room, her sweatshirt pulled up to reveal the expanse of her belly? Where was she?

"Am I supposed to take the wet bedspreads out of the dryer?" I shout before Thad has a chance to speak, knowing that I'm getting angry at him to keep myself from getting angry at the baby. "Seriously? Is that what you're telling me to do?"

"Do you want me to come home?" he says. Oh God, yes. Yes, I want him to come home. I want him to come home more than anything in the entire world. I want him to rescue me. Actually, I want him to come here, to the street, and pick up the baby, and take her home so I can go back to the Laundromat and finish my job. I know I'll feel better if I can accomplish something, and if it's not stopping the baby from crying, it's washing the bedspread and the afghan. It's getting rid of the dog hair. I need to complete this one task to assure myself that I can do at least one thing right.

Of course, Thad can't come home. He started a new job training pharmaceutical reps less than a month ago and his boss already gave him a week off when Blair was born. Plus, he has a 40 minute commute each way. Plus, by the time he'd get here, the laundry would be done anyway.

"Yes, I'm fine," I say, again, as if saying it again might make it true. "Just come home as soon as you can." I flip the phone closed.

Just then, the train whisks by above the bushes where the street dead-ends. It's the train I took every morning to get to work. Eighteen minutes from the Westmont station in New Jersey, over the Ben Franklin Bridge, to Center City, Philadelphia. I listen to it pass, the hum of the rails on the track rising in pitch as it picks up speed.

"I wish I was on that train," I say, out loud. A Ford Explorer drives by, the driver watching me talking to myself as I stand next to a vacant lot with a baby stroller and gaze longingly at the train track. He probably thinks I've escaped from an asylum with all this stringy brown hair clumped in a nest on the top of my head, my body hidden in extra-large yellow sweatpants, Thad's blue-and-gray checkered flannel that I've not taken off for four days, and a pair of light blue sandals that I bought at Target the day after I came home from the hospital because my feet had swelled two sizes from the fluids they pumped into me for the epidural that wore off 10 minutes before Blair came screaming out of my body.

And, now, she's still screaming. I grab the pacifier out of the stroller's cup holder, the same pacifier the baby has refused to even drool on for the past 14 days of her life and that I've been carrying around like a talisman, praying on it, please, for the love of God, just put this thing in your mouth for five minutes, just shut up for five minutes. She lets the pacifier rest on her tongue, opening her mouth wider to scream around it. I pick her up, and she cries even harder, shrieking almost, as if there could be nothing more upsetting to her than being held by me.

I feel tears running down my cheeks, though they don't feel like my tears and they don't feel like my cheeks. I look at the clock on my phone -- there are 17 minutes left on the dryer cycle, which means I have 17 more minutes to kill. I slide Blair back in the stroller and start pushing again. I make a right down another street, past a cute house on the corner with a sign in the front yard that reads "Welcome to the Nut House."

I wish I were on that train.

Vicki Glembocki is a columnist for Women's Health and a writer at large at Philadelphia Magazine. She, her husband Thad and her two daughters live in Southern New Jersey.