Should biotech piggy go to market?

Consumer advocates worry that the FDA is throwing open the barn door to genetically engineered animals too quickly. 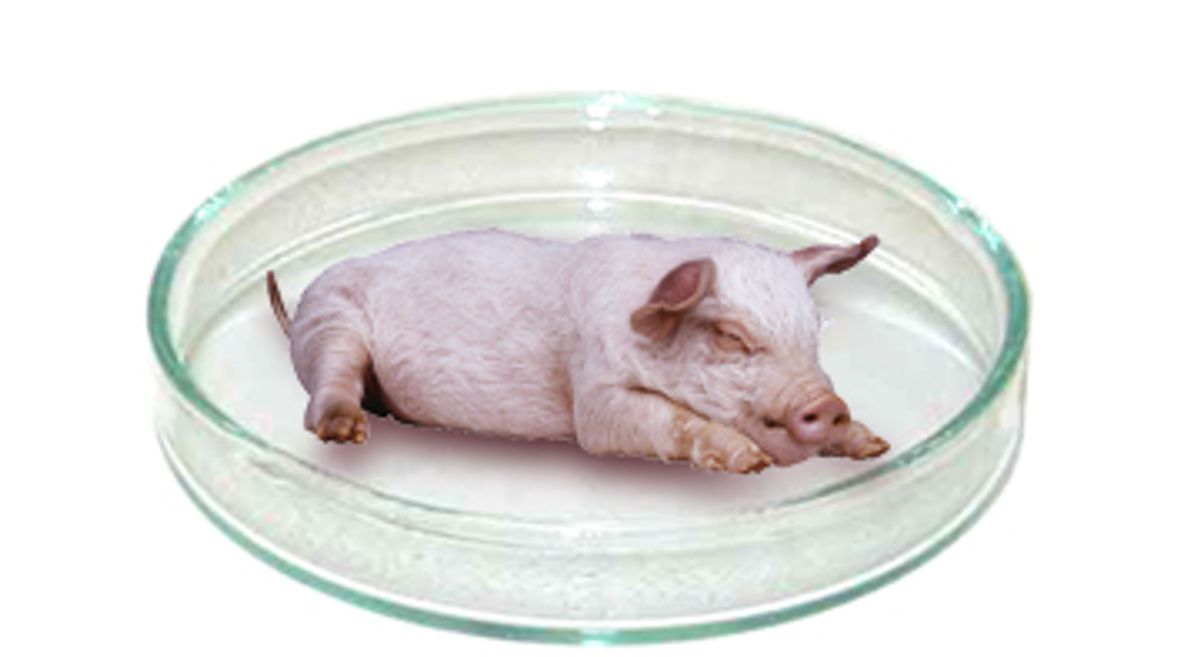 Behind locked doors, past a shower, where humans are required to rinse, more than 25 pink pigs crowd into hay-covered pens at the University of Guelph in Ontario, Canada. They look like regular Yorkshire pigs: Their eyes gleam like black marbles, they snort, and they scarf dinner from a trough. "These pigs behave like pigs; they do everything a pig would do," says John Kelley of Mars Landing, a Canadian agricultural development program. Except for one thing.

These pigs have been modified to carry a gene from an innocuous strain of E. coli that has been spliced with a protein from a mouse. This doesn't give the pigs a newfound affinity for cheese. Rather, the added gene enables the animals to produce the enzyme phytase in their saliva. This enzyme, say Guelph researchers, could solve one of the major environmental problems associated with industrial pig farms.

Normal pigs can't break down phytate, a phosphorus-rich compound in their gut. When manure lagoons on hog factories overflow or breach into nearby rivers or seep into groundwater, the high phosphorus content creates algae blooms, killing fish and other marine life. Trademarked the Enviropig, these genetically modified pigs produce 60 percent less phosphorus in their manure than their conventional cousins.

Although they've been raised at Guelph for seven years, the miracle pigs haven't made it out of the lab. They have been hogtied by American and Canadian regulatory agencies, which have not written regulations for genetically engineered animals' entrance into the marketplace. But thanks to a landmark law recently passed by the U.S. Food and Drug Administration, these little piggies may soon be headed to market.

In January, when the FDA declared that cloned animals and their progeny are safe to eat, it opened the door to genetic engineering, a prospect that hasn't been widely reported, but one that has plenty of consumer advocates concerned. "In my opinion, the FDA approved animal cloning only to open the door to genetic engineering of animals," says Jaydee Hanson of the Center for Food Safety, a Washington, D.C., group.

The U.S. agency reached the decision after reviewing hundreds of scientific studies that found no significant nutritional or toxicological differences in the composition of the meat or milk of cloned cows, pigs and goats from those of their more traditional brethren. In the short term, that means that breeders of cows, pigs and goats can now genetically copy their most prized animals as a way to take the guesswork out of breeding. Within an undisclosed period of time, food from clones and their descendants can be sold at grocery stores and restaurants without any special labels. In the long term, the decision is the first step to the regulation and commercialization of genetically engineered animals.

For livestock professionals like Kelley, the FDA's decision, and a meeting the U.S. Department of Agriculture held in late November to seek guidance on how to work with transgenic animals, signal that the U.S. is primed to consider the public's appetite for G.E. animals. They say it is a sign that the agency is beginning to take more seriously the job of creating regulations for G.E. animals. And that's a necessary assurance for potential investors, says Barb Glenn of Biotechnology Industry Organization, an international trade organization. "This is huge," says Glenn. "Without cloning, we wouldn't be able to advance genetic engineering research. It allows us to better study G.E. animals and really helps us get the benefits from G.E. research. This contributes to the long stewardship we have in the agricultural industry to improve the animal."

To clone an animal, a cell nucleus is taken from an "elite" animal, implanted into an egg whose nucleus has been removed, cultivated into an embryo in a lab, and then implanted in the womb of a surrogate "mother" of the same species. To genetically engineer an animal, scientists splice foreign genes, generally from some other type of animal, into a nucleus, and then implant the modified embryo into a host mother.

Creating a transgenic animal is incredibly difficult and expensive, prone to mistakes that can cause the premature death of animals. "Genetic engineering doesn't work all that well," says Hanson. He points out that once genetic farmers produce the perfect animal through trial and error, they will save a tremendous amount of money by cloning its genotype -- which is why they welcome the FDA ruling. "When they find it works in an animal, they want to copy it with cloning," Hanson says. "Cloning is how you Xerox your success."

Hanson and other watchdog groups, including the Union of Concerned Scientists and Consumers Union, have been critical of the FDA's research review that led to its approval of cloning, claiming that the agency dismissed studies that raised questions about safety. "It was a pathetic risk assessment," says Michael Hansen of Consumers Union. "There were small sample sizes and the studies weren't designed properly. For controls, they used cows in other fields, not raised under the same husbandry conditions."

Despite the criticism, labs throughout North America are betting that genetic engineering will be the norm in the future. They include Revivicor in Blacksburg, Va., working on animal tissue transplants for humans. Remember the 1993 movie "Untamed Heart"? As you recall, human biology prevents the acceptance of animal organs and tissue. (Quick reminder: Christian Slater dies because his body rejects his transplanted monkey heart.) Human blood circulates high levels of an antibody to a particular sugar that rests on the surface of all pig cells and tissues, spurring people to reject pig hearts or livers.

At Revivicor, researchers have deleted the gene in pigs that causes the placement of this sugar on pig tissues. In tests, they are transplanting these genetically engineered pig hearts, kidneys, livers and pancreas cells (to treat diabetes) into non-human primates, mostly baboons. Within three years, the company plans to begin human trials. Aside from bridging the gap between human demand for transplants and available organs, Revivicor chief executive officer Dave Ayares says such G.E. pig organs and cells would also be safer than human organ transplants, since they would be free of HIV or hepatitis.

Near the golden cornfields of Sioux Falls, S.D., another experiment in genetic modification is abloom. Hematech, a decade-old biotechnology company, has genetically manipulated cows that produce disease-fighting human antibodies in the plasma of their blood. The clones of these transgenic cows, born with human antibodies in their systems, are "hyper-vaccinated" against specific diseases, explains chief operating officer Eddie Sullivan, so that the plasma from their blood can become human drugs.

"It's exactly the same way you get vaccinated; we give them a little shot in the hind end," says Sullivan. "Their plasma has extremely high concentrations of the antibody, so the cows become plasma donors two or three times a month, using the same machines we humans use to donate plasma to people."

Such antibodies could be used to develop drugs that combat infectious and neurotoxin disease, and even bioterrorism; Hematech has received federal funding to develop antibodies to counteract the toxicity of anthrax. Hematech now has more than 300 head of modified cattle and hopes to begin clinical drug testing by 2010.

Enviropigs aren't the only transgenic animals being developed as a way to eliminate the problems associated with large-scale industrial farms. Scientists at Virginia Tech are trying to clone cattle that would be genetically incapable of developing mad cow disease, a deadly brain-wasting illness spread by feeding cows, normally herbivores, the meat and bone meal of infected cattle. Researchers in Virginia would protect cattle from the fatal disease by producing animals that lack prions, a naturally occurring protein that appears to be the main conductor of the pathogens.

The subtext of any discussion about the science of G.E. animals is whether this is something the public wants or is ready for. Regulation, if done well, would increase consumer confidence in the efficacy and safety of the animals. But the ways government has proposed regulating such new "products" raises concerns from consumer and environmental groups, and a 2002 National Academy of Sciences Commission.

A policy paper issued by the White House in 2001 implied the FDA would regulate transgenic animals the same way the agency considers new animal drugs. Such an approach would entail a rigorous review of each individual G.E. animal or product to assess food safety and animal welfare, and would require pre-market approval from the FDA before being available for commercial use.

However, under this law, the process by which the government would approve one of these transgenic animals as fit for the market would happen in secret to protect the proprietary interests of companies from their competitors. There would be no opportunity for the public to provide comments or be involved in a discussion until after the G.E. animal was given the stamp of approval.

Moreover, the FDA has almost no experience regulating environmental impacts that could be associated with transgenic animals. That includes the ecological impact of a transgenic animal getting loose in the environment and breeding with native or conventional populations.

"The FDA's in a tough spot on cloning and transgenic animals," says Michael Taylor, a former FDA and USDA official, who now teaches public health at George Washington University. "All the heat is on FDA but it's not empowered to deal with all the questions being raised. The FDA is put in a position of making a decision, but it's not empowered to address the broader societal issues."

The FDA issued a boilerplate response that it's "working closely with producers of genetically engineered animals to ensure that they do not enter the food supply unless they have been shown to be safe."

In reality, even the three locked doors of the Enviropig research facility haven't always succeeded in preventing the pigs from getting to market. In early 2002, the carcasses of 11 stillborn Enviropiglets were accidentally taken from a freezer where they were waiting to be incinerated, as is required by law, and shipped to a rendering plant. While there, they were turned into palletized food and fed to chickens and turkeys on Ontario farms. The government didn't destroy any of the eggs or birds because it believed there were no human health concerns.

The week after the FDA decision in January, the Guelph researchers who developed the Enviropig flew to meet with regulators in Washington. There's no timeline at this point for when their green pigs might arrive on our dinner plates as pork chops.