U.S. and Israeli hard-liners -- some with close ties to John McCain -- are once again hyping the Iranian nuclear threat. 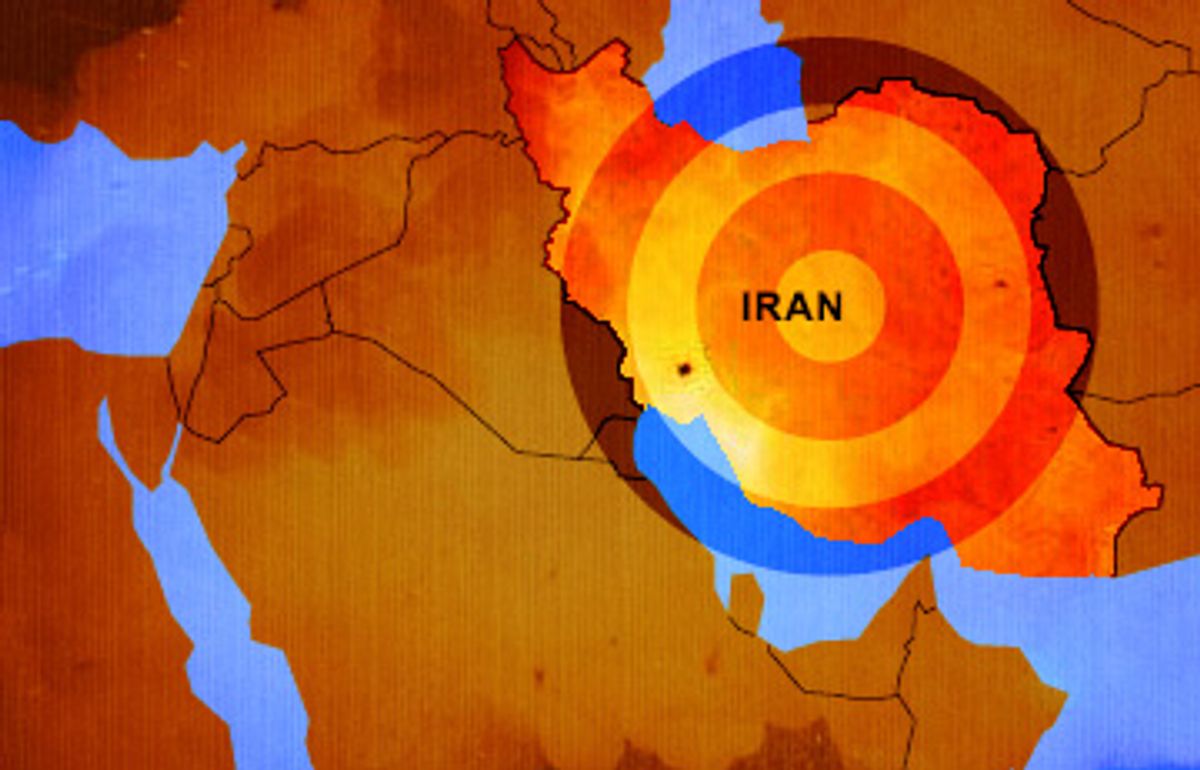 Recently, I asked former Mossad officer Michael Ross what he thought of the latest U.S. National Intelligence Estimate released in December, which downplayed the threat posed by Iran's nuclear program. "That farce?" he replied, adding that many in Israeli intelligence were "furious about it -- not just the conclusion of the estimate, but its timing as well." Some Iran hawks believe that the United Nations Security Council was poised at the time, with the United States leading the charge, to tighten the vice on the Iranian regime with tough new sanctions. But in the wake of the NIE's disclosure, there was a powerful shift in world opinion about Iran's alleged nuclear program, and the momentum was apparently lost.

Ross operated covertly inside Iran in the early 1990s, spying on the Iranian nuclear program for Israel, and worked closely with U.S. intelligence agencies, before retiring in 2001. His view of the NIE, which concluded that Iran had halted the weapons development aspect of its nuclear program in 2003, is similar to views held by hawkish intelligence officials and policy thinkers in the U.S. and Israel. On the Iranian issue in particular, there has long been a close relationship between the Israeli and U.S. governments, and the NIE's disclosure set off a flurry of activity in both countries. It had put hawks in an extraordinary position: If they wanted to keep up the pressure to go after Iran -- using diplomacy and sanctions, or perhaps military force if deemed necessary -- they would now have to discredit the highest-level intelligence report produced by the United States.

In Jerusalem, top Israeli leaders convened a meeting to decide how to deal with the problem. One result of the meeting was that when President Bush visited Israel in January, Israeli Defense Minister Ehud Barak was tasked with briefing him on Israeli intelligence on Iran, allegedly including some new information, in order to convince Bush to continue applying maximum pressure on Iran. "It's apparently true that in 2003 Iran stopped pursuing its military nuclear program for a time," Barak said then, "but in our opinion, since then it has apparently continued that program."

Meanwhile, in Washington, various interest groups with hard-line views on Iran and the Middle East have been working vigorously to refocus U.S. and world attention on Iran as an imminent threat. They include Evangelical Christians and conservative Jewish lobbyists -- some with close ties to John McCain. The founder of one influential Evangelical group, who has made aggressive calls for attacking Iran, just endorsed McCain's run for the White House.

With McCain the presumptive Republican nominee, national security and instability in the Middle East are certain to return to the spotlight in the general campaign, as many McCain supporters believe those issues play to his strengths. The director of foreign policy for McCain's campaign said in an interview Wednesday that McCain remains "skeptical" of the latest NIE's findings, and outlined McCain's views on Iran in terms similar to those of some hawkish lobbyists working behind the scenes in Washington.

On Monday, the U.N. Security Council voted to impose a new round of sanctions on Iran. The latest round will freeze the assets of some Iranian officials and companies connected to the nuclear program, as well as prohibit trade with Iran in certain supplies that have both civilian and military uses. Although hawks are somewhat heartened by this development, U.N. sanctions have effected little change in Tehran in the past, and for many of them the latest round is not enough.

David Brog, executive director of Christians United for Israel, has referred to the latest NIE as the "National Incompetence Estimate," and told me that CUFI is engaged in serious efforts to counter the reduced sense of urgency about Iran that it spawned. Although he hadn't yet had a chance to fully analyze the latest sanctions, he said his sense was that they were again relatively "soft," because that would've been "the only way to get consensus" at the U.N. Security Council. He said that his organization is pushing for all measures against Iran short of war -- but also repeatedly stressed, "No one should take the military option off the table. It would be ill-advised diplomacy to assure Iran or any foe that there will never be military consequences to their actions."

Brog's group was founded by John Hagee, who serves as its national chairman. A fiery Evangelical Zionist who has openly called for a preemptive strike on Iran, Hagee endorsed John McCain's presidential run on Feb. 27.

At its annual conference in Washington last year, CUFI armed its attendees with talking points on Iran and sent them off to see their Congress members and senators, a strategy similar to that of the American Israel Public Affairs Committee, the powerful lobbying group. It is likely that both organizations will do the same thing at their annual conferences this summer, which will come at a time analysts believe could be fraught with danger in the Middle East because of Israel's escalating conflict with Hamas in Gaza, and continuing tensions between Israel and the Iranian-allied Hezbollah. Brog told me that he hopes the presidential nominees of both political parties will attend this year's CUFI conference in Washington.

Speaking at last year's conference, McCain told the crowd that the only thing worse than a military confrontation with Iran was a "nuclear armed Iran," and that the "regime must understand that it cannot win a showdown with the world." Since the NIE's release, McCain has been in the ranks of those dismissive of it. His campaign's director of foreign policy, Randy Scheunemann, told me Wednesday that "a careful reading of the NIE indicates that it is misleading." Scheunemann also said that McCain has been critical of the intelligence community for trying to "make policy" with the NIE. "There can be no doubt that the NIE harmed our efforts to achieve a greater diplomatic consensus" to crack down on Iran, he said.

In addition to its efforts on Capitol Hill, CUFI has also held meetings with senior officials in the Bush administration, such as one in 2006 with Deputy National Security Advisor Elliott Abrams that focused in part on Iran, and one this past fall, around the Annapolis peace conference, with National Security Advisor Stephen Hadley. In February, Hadley devoted a major portion of a speech at Stanford University to highlighting the continuing danger of the Iranian nuclear program. "The threat of a nuclear attack on the American homeland remains very real," he said, listing Iran as one of the sources of the threat.

For its part, AIPAC is behind an effort to tighten the financial noose around Tehran. Rather than pushing for wide-ranging sanctions, as some have in the past, AIPAC is lobbying lawmakers to introduce more specifically targeted -- and potentially much more potent -- sanctions, which may have a higher chance of being adopted than broader measures. While commending the latest U.N. sanctions, AIPAC is pushing for the U.S. government to unilaterally sanction "foreign banks who continue to conduct transactions with the four state-owned Iranian banks," and "designate the Central Bank of Iran as a supporter of terrorism and weapons proliferator," according to one of its recent policy memos.

In addition, according to AIPAC spokesman Josh Block, the organization is throwing its lobbying muscle behind two new congressional bills that include a raft of sharp measures -- such as prohibiting foreign subsidiaries of U.S. companies from doing business with Iran. A key goal here is that the U.S. would no longer have to rely only on multilateral enforcement of U.N. sanctions to squeeze Iran. (AIPAC at this point is not advocating any military measures against Iran -- arguably an untenable approach for any presidential contender if not most American politicians right now.)

McCain is a favorite of many in the AIPAC fold. Scheunemann, McCain's foreign policy director, also told me that McCain believes the new U.N. sanctions aren't enough, and that tougher measures are necessary. He said that McCain would support "sanctions outside of the U.N. framework," and that although "the military option is fraught with danger" he would not take it off the table.

Propelled by Tehran's vitriolic words and increasing fears about its intentions, the Israeli government has been ratcheting up its own rhetoric in the wake of the NIE. A few weeks ago, Prime Minister Ehud Olmert was clear on his opinion of the situation. "The basic fact doesn't change. There is a plan to make non-conventional weapons and it must be stopped," he said. "Sometimes you don't need intelligence services. You just need to analyze what you know, what everyone knows, and it's very obvious and very simple."

When asked if this meant a military action was possible, Olmert used the line long heard from the Bush-Cheney White House. "No option is ruled out," he said.

It's possible that if Israel feels backed far enough into a corner, it may take matters into its own hands. "Planning for different scenarios -- or intervention operations -- has been under way for years," Ross, the former Mossad officer, told me. "And attempts have already been made. For example, attempts to shut off power grids to various installations."

There is an overwhelming consensus in the Israeli government, though, that any operation that went much beyond sabotage should be a last resort. From an Israeli point of view, it would be far preferable for the international community to do the dirty and dangerous work of defusing what is seen in Israel as a ticking Iranian bomb. This effort would presumably be led by the United States.

In "The Volunteer," a book about his experiences working for the Mossad, Ross recounts learning about Iran's intentions to gain nuclear weapons, long before it was such a big international issue. He told me he is certain that his successors in Israeli intelligence -- as well as their colleagues in the Israeli diplomatic corps -- are using regular liaison meetings with their U.S. counterparts to continually press for action against Iran. Because of this, he said, the release of the latest NIE, and the resulting weakening of the American stance, fueled a lot of anger among Israeli officials.

I asked him if he could foresee a time when Israel would lose faith that the international community or the United States would deal effectively with the Iranian situation, and decide to take action on its own. "It's in Israel's interest to squeeze as much as possible out of sanctions first," Ross said. "But I'm thinking that they're almost there anyway."