"Miss Pettigrew Lives for a Day"

Don't let this delightfully frothy drawing-room comedy get lost between the sofa cushions. 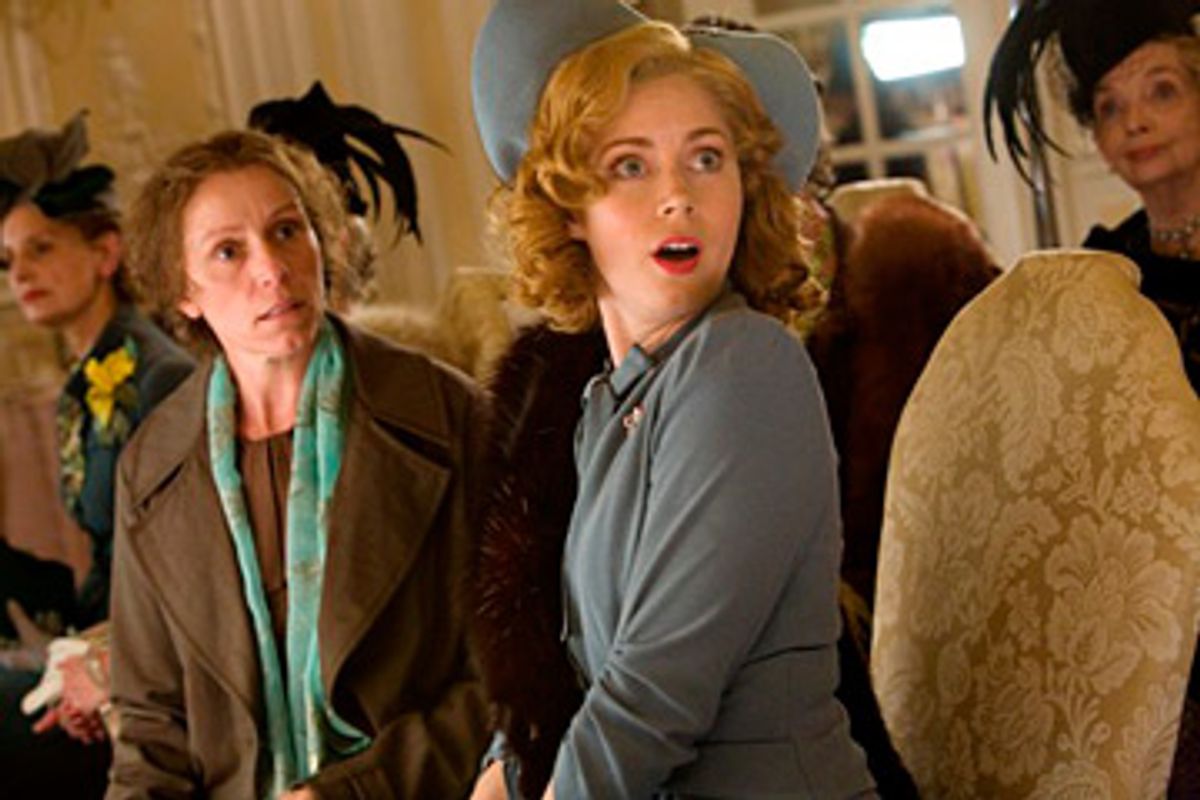 There are so many movies jockeying for our attention these days that a slender pleasure like Bharat Nalluri's drawing-room comedy "Miss Pettigrew Lives for a Day" could all too easily slip between the sofa cushions. The picture falls far short of perfection: It doesn't pop and sparkle as much as it needs to. Nalluri -- who has worked mostly in television -- doesn't have as much control over the material as he might: This story, set between the two world wars, of an unemployed governess who changes several lives (one of them her own) in the course of a single day is joyously exaggerated and exuberant, but sometimes it's a little too heavy on its feet. The jokes and gags hit too squarely; the movie conspicuously lacks a light touch.

But "Miss Pettigrew" is also one of those rare cases where a filmmaker's good intentions, and the enthusiasm of his actors, are enough to fill in the cracks. Based on a 1938 novel by the English author Winifred Watson (the book was republished in 2000 by Persephone Books), the movie, which was shot by John de Borman, with production design by Sarah Greenwood, has a pleasingly retro look and feel: A lingerie fashion show takes place in the kind of pink, cream and gilt ballroom that's all but disappeared in the era of hip boutique hotels; the movie's female characters are draped in satin robes and crepe dresses that move differently than modern fabrics do. The picture is authentically period without feeling stale or stuffy.

And the story is nothing more than a meringue, an appealing little idea that's been whipped into a froth by screenwriters David Magee and Simon Malfoy: The Miss Pettigrew of the title, played by Frances McDormand, is a governess who keeps losing her posts -- the prim head of her employment agency decrees that she's a "governess of last resort." Desperate for a job, especially after spending a night, hungry and anxious, wandering the streets, she insinuates herself into a position that's intended for someone else, becoming social secretary to a cutie-pie American cabaret singer named Delysia Lafosse (Amy Adams), who needs all the help she can get in order to keep her three suitors straight: There's Nick (Mark Strong), the slick nightclub owner who foots the bill for her apartment and smart clothes; Phil (Tom Payne), a boyish impresario-in-training who may be able to further her career; and Michael (Lee Pace), the charming young pianist who is clearly her one true love.

Mary Poppins-like, Miss Pettigrew drops into the scene and surveys it crisply, getting down to the business of setting wayward love affairs back on track. She herself becomes involved in the tormented relationship between Joe, a dashing lingerie designer (played, in a delightfully improbable bit of casting that works, by the Irish actor Ciarán Hinds), and Edythe Dubarry, an icy-chic boutique owner (the wonderful Shirley Henderson, who wields a Bakelite cigarette holder as if she were born to do so). In the course of a day, Miss Pettigrew is transformed from a nervous bird in a drab brown dress into an appealing, realistically attractive middle-aged woman, one whose common sense is so vibrant that it practically throws off an erotic charge.

"Miss Pettigrew" isn't quite a farce -- it's too gentle-spirited for that, and its wit doesn't cut very deep. But there are moments of seriousness flashing through its frivolity: At one point Miss Pettigrew and Joe, having taken time out from a party, pause as a group of bombers thunder through the skies above them, a reminder of the war they know is inevitable. "You don't remember the last one," she says to him, a comment that isn't phrased as a question but that nonetheless poses one. "No. I don't," he responds, and the moment is left hanging between them, a mystery that's resolved in a lovely sequence later in the movie.

McDormand and Hinds are marvelous together, not least because their unusual, strong-featured faces are so well-matched: There's nothing halfway or indecisive about either of these faces; they're expressive and alive every instant. Adams' Delysia, on the other hand, is dithery and parakeet-like, and in her early scenes she comes off as too cartoonish even for a movie as stylized as this one is. But even she eventually settles into the picture, as if she were snuggling into a lush fur wrap: Her character (and the performance) becomes less manic and more touching. "Miss Pettigrew Lives for a Day" is a picture about transformation and finding true love, which, depending on your viewpoint, are either staid, overcooked themes or classical ones. But either way, the movie's simplicity is its strong suit: It never pretends to be more than it is. Miss Pettigrew's life is changed in small ways when she dons a new dress in a flattering color and trades her flyaway mouse tresses for a cap of curls. But the real change she undergoes is hardly cosmetic. Watching McDormand navigate that transformation is the kind of thing that can keep your hope in movies, and in actors, alive.