Some free advice for Obama

The Clintons' personal and financial affairs have already been investigated ad nauseam. He should focus on answering any serious questions raised about his own. 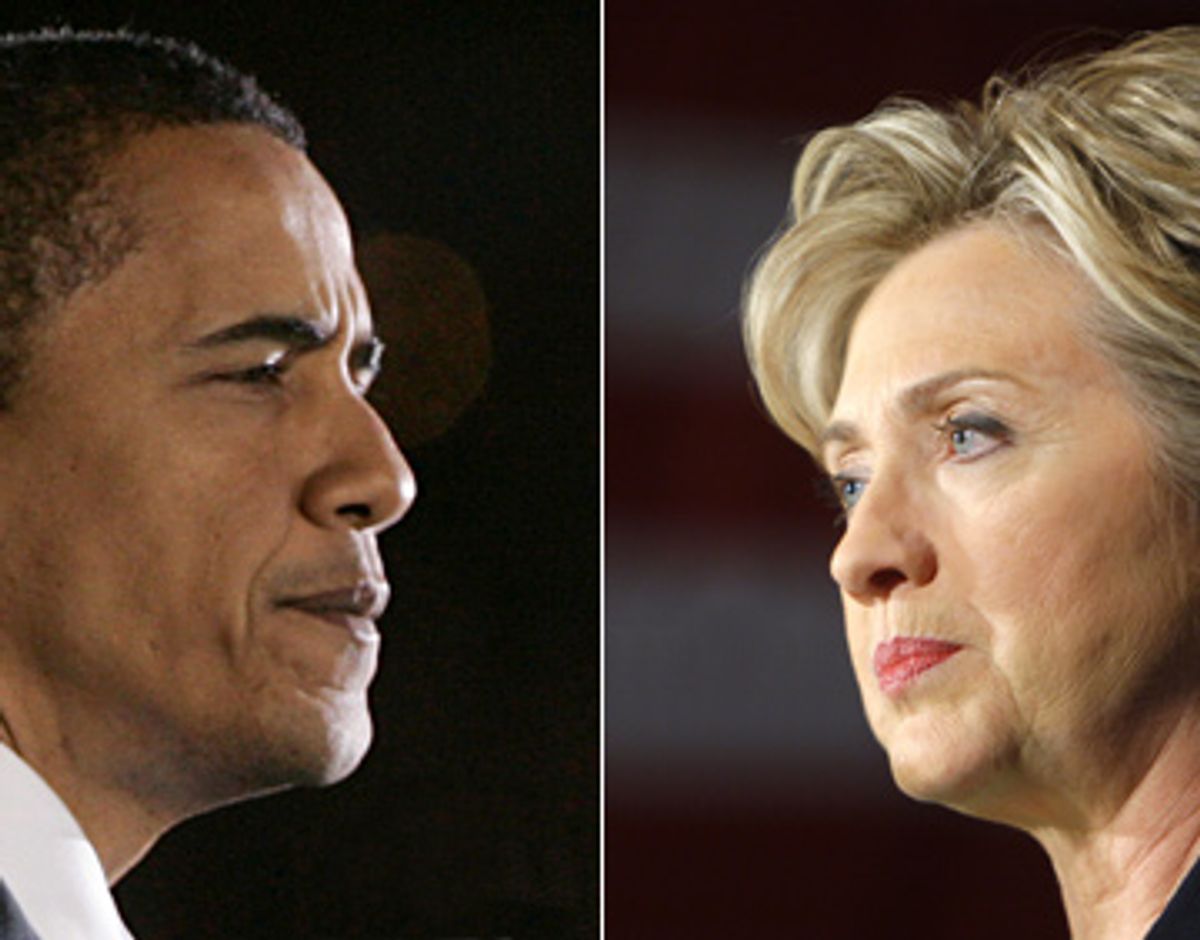 Whether the Democrats know enough about Barack Obama to nominate him for president -- and whether the nation will endorse that nomination in November -- remains to be seen. So far, as the trial of his former patron Antoin Rezko unfolds, nobody has even suggested that Obama did anything illegal or unethical to advance his relationship with the indicted Chicago developer. Yet many questions are still unanswered about that relationship, which included well over a hundred thousand dollars in political contributions and simultaneous real estate purchases that concluded three years ago with the Obama family owning a South Side mansion (and the Rezko family owning an adjacent lot that enlarged their celebrated neighbor's yard space).

Rather than address those concerns fully, however, the Illinois senator has dithered and dodged, according to reporters in Chicago. Now Obama and his aides persistently deflect attention by pointing an accusing finger at the Clintons, complaining that they haven't revealed their tax returns or named all the donors to the Clinton Foundation and the Clinton Presidential Library, while occasionally alluding to the ancient Whitewater "scandal."

While the Clintons have many faults -- including the arrogant and sometimes offensive way they have conducted this campaign -- the scandal tactic won't vanquish them. Hillary Clinton's advertising may inflate her national security experience, but when she claims to have been tested by partisan fire on her way from Arkansas to the Senate, she isn't just blowing smoke. There is no politician in America whose personal and financial affairs have been subjected to similar scrutiny except her husband, and he is retired.

So if Obama expects a devastating revelation to leap from the pages of the Clinton tax returns when they are released to the press next month, he is more than likely to be disappointed. Chances are that she hasn't yet released her 2007 return because the paperwork isn't ready -- and she probably doesn't know what it will say when it is complete. Like most wealthy senators (and alas, most senators are wealthy), she doesn't spend much time poring over her own finances. Other people are hired to do that, and besides, she's been fairly busy for the past year or so.

Observers with short memories should be reminded that the independent counsel probe led by Kenneth Starr did not merely examine all of the Clintons' bank statements, mortgage documents, legal records and tax returns over a period stretching back to the '80s, but dragged many of their friends, associates and employees before a grand jury to interrogate them under oath about the Clintons. Following six years of intense investigation, the partisan prosecutor had little to show beyond that stained blue dress -- and nothing that plausibly implicated Hillary Clinton in any significant wrongdoing. Starr and his staff wanted to send her to jail, and spent more than $50 million searching for the evidence to support an indictment. That doesn't include the Senate Whitewater Committee, led by Alfonse D'Amato, which wasted plenty of money and time to find ... nothing.

Of course, those episodes concluded almost a decade ago. But the same investigations continued in a different form, conducted by the reporters who were hired to write expensive Hillary Clinton biographies for big publishers. But again, despite the strong incentive to produce dirt, the recent books by Jeff Gerth and Don Van Natta and by Carl Bernstein revealed little that was even unflattering, let alone incriminating, aside from the usual recycled gossip. Those Pulitzer-winning professionals, eager to expose whatever scandal might exist, no matter how minor, likewise discovered nothing.

As for the Clinton Foundation, the heavy-breathing insinuations about "secret" donors seem overblown. The role of Frank Giustra, for example, the wealthy mining investor whose huge contributions to the foundation have created controversy because of his company's uranium deal in Kazakhstan, was never secret. Or at least the Clinton Foundation staff didn't think so when they told me and other reporters about him three years ago.

When I went to Africa with Bill Clinton in July 2005 to work on a cover profile of the former president for Esquire, we traveled from South Africa to Kenya, Tanzania and Rwanda on Giustra's plane, a fact known to all the journalists on the trip, including Jennifer Senior of New York magazine and CNN's Sanjay Gupta. While I was reporting the story, foundation officials told me that Giustra had also provided the plane that took him and Clinton to Kazakhstan, China and other destinations later that summer. Donations and sponsorships from a wide assortment of other sources -- including Bill Gates, numerous investment banks, industrial companies, foreign governments and wealthy individuals -- have been made public on the foundation Web site.

Moreover, the Obama campaign would do well to not draw excessive attention to the Clinton Foundation, since it would only succeed in speeding the rehabilitation of Bill Clinton. His efforts currently provide HIV/AIDS medication to as many as 1.5 million poor people in Africa, the Caribbean and Asia who would otherwise be abandoned to die. (If Obama doesn't believe me he can ask Nelson Mandela, who challenged Clinton to deal with the crisis.) That humanitarian achievement demanded both audacity and hope, but it also required money. Whatever the former president has done to raise funds from his billionaire friends -- and he appears to have done nothing unethical at all -- there is not a shred of evidence that he relied upon any influence wielded in the Senate by his wife. Indeed, her policy stance toward the foundation's friends in places like Dubai and Kazakhstan is critical and unyielding.

Obama, who has mounted an inspiring and effective campaign, remains the favorite to win the Democratic nomination. And as the contest continues, he should answer every attack by the Clinton camp on his experience, his policies and his rhetoric. But he should stop seeking to divert attention to her supposed ethical problems, and concentrate instead on responding to every serious question that is raised about his finances and his associations. He will have to address them all sooner or later. Sooner would be better for him, the party and the country.