"Survivor" in the rubbish

"Dumped," a new reality show, tosses vain Brits into a garbage dump to live among the maggots and tires. It's trash TV with a message. 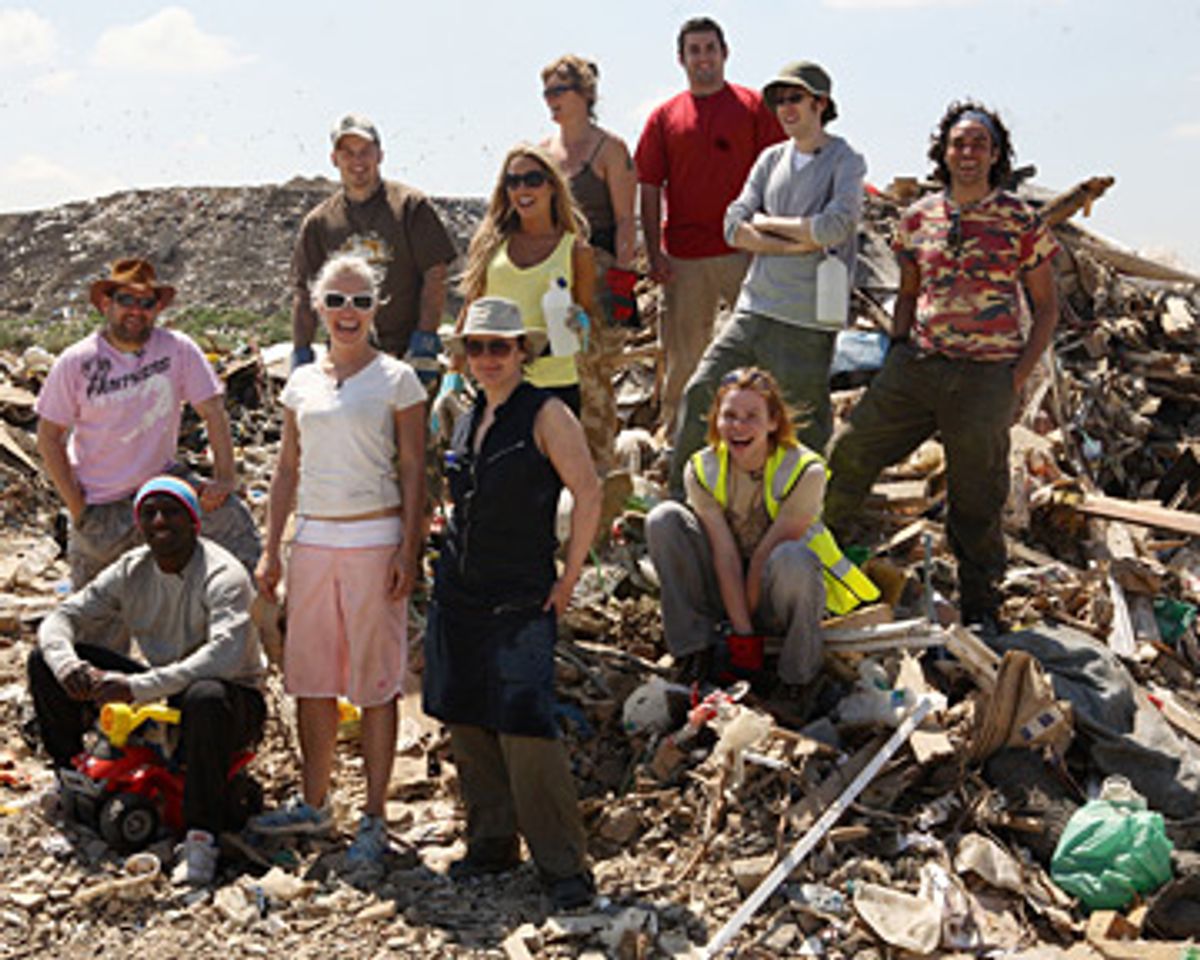 If you gussied up a green public service announcement as a reality TV show, would anybody who doesn't already recycle watch it? That's plainly the hope of the creators of "Dumped" (premieres Sunday at 10 p.m. EDT on BBC America), a four-part reality show that aspires to do more than invite viewers to gawk at the spectacle of double-crossing adults making fools of themselves in pursuit of cash, glory and fame. "Dumped" wants to unleash a tsunami of righteous disgust at the grotesque excesses of our throwaway culture. It's reality TV with a message about, well, reality.

Our eco-lesson disguised as entertainment begins with 11 contestants, including an Iraq war vet and a platinum jewelry salesman, ensconced in a luxury hotel near London's Gatwick airport, dining on fresh strawberries, melon and oranges at a linen-covered table, anticipating their upcoming three-week eco-adventure at an as yet unknown destination. On the environmental spectrum, the participants range from Selena, a personal trainer, who describes herself as an "eco-pain in the ass" to Darren, a woodworker, who owns four cars and wears his underwear only once before throwing it away because he "loves the crispness" of new tighty-whiteys. Then there's Sasha, a streaky-blond part-time model, who says she knows all about global warming. "I've noticed it's getting warmer, but I like that, because I like sun anyway," she says, dissolving into giggles.

Most of the eager contestants assume they'll be flying abroad, perhaps to a remote island or a tropical rain forest to do something good for the earth while experiencing the glories of its natural wonders. They wish. The group travels by bus to a dump outside Croydon in South London, where they'll spend the next three weeks living off the junk that their fellow Brits have thrown away. At the dump, hundreds of seagulls feeding on the rubbish squawk as the dismayed participants disembark from the bus, covering their mouths and noses with their hands in horror -- and to ward off the stench -- and surveying with revulsion the mountains of bent tricycles, used tires, discarded carpeting, rotting lettuce and other filth that they're expected to inhabit. "Someone's not been recycling!" quips one contestant. The British are lousy recyclers compared with the conscientious Dutch and Germans, but -- wouldn't you know it? -- Americans are the worst of the bunch when it comes to producing too much trash.

First lesson of the show: The "environment" isn't something out there in the wilderness that you take a vacation to appreciate; you're impacting it every day, right at home, every time you dump something in the trash. Lest this insight be lost on the contestants -- or viewers -- "Dumped" gives us Rob, who we're told is a big-shot environmental designer in the U.K. -- to remind them and us. Rob serves as the show's Jolly Green Giant, and cheerleading host, dropping by the dump periodically to give the group a challenge: Build a shelter using nothing but trash. Rob tries to buck up the trash campers with statements like, "We need to reduce the amount that we put into landfill, and we need to actually think of it not as a waste, but as a resource."

Before our grossed-out gang pulls together to put a roof over their heads, we're treated to lots of whining and exclamations about how disgusting it is to be surrounded by dusty, decomposing trash that's crawling with flies and teeming with maggots. There are shots of nail-biting and dour faces, along with lines like, "On a scale of 1 to 10, this is pretty bad." One melodramatic psychology student named Aaron exclaims: "I hate it here. I actually hate it here. I want to die." Or you could just go home, Aaron.

At any time, a junkyard adventurer can drop out. All he or she'd be forfeiting is a cut of about $40,000 in "reward" money. Whoever makes it through three weeks at the dump will get an equal share of the cash. In other words, the fewer contestants who go the distance, the bigger the payday for the filth survivors. Unfortunately, at least in the first episode, this incentive structure is not a fat enough carrot to inspire the contestants to plot against one another. In fact, for the most part, they're positively supportive of their fellow dump divers. At one difficult moment, Christine, an artist and designer who we're told meditates regularly, intones, "We're all here for each other." When one participant finally decides to give up and go home, the rest plead and wheedle for their comrade to stick it out, if not for another night, at least through tea.

As if the all-for-one, one-for-all spirit weren't dispiriting enough, the group works very well together, building a passable shelter out of old scaffold poles and a trashed tarp with several hours to spare before nightfall. There's a little mild bickering about who is in charge, but nary a word is spoken in anger. Everyone's too busy dutifully scavenging wooden pallets and hammering rusty nails. In fact, this gang is so effective that Rob, the host, is reduced to trying to gin up conflict by insulting their shelter design, which looks like a large A-frame tent. He dubs the concept "boring, predictable and unimaginative." Rob encourages our eco-warriors to not only survive but "thrive" at the dump to illustrate that a great life can be lived on all the junk that's being tossed. Cue image of a contestant sprawling across a discarded wooden coffin she has salvaged, laughing and declaring that it makes a great chaise lounge.

Despite the show's survivalist patina, there are health and safety considerations that make it less than a full-on purist freegan experience. A "health expert" makes an appearance to inform the contestants of the hazards of rat piss. Apparently, rats are "incontinent" and pee all over the place as they scurry about. About a quarter of these critters carry an infection that can be fatal to humans. The campers are admonished to wash their hands frequently, especially before and after they go to the bathroom. They're also given sleeping bags, water bottles, a roll of toilet paper each, hot water, gloves, face masks and plenty of fresh food. (You didn't really think that they'd eat the stuff that their fellow Brits failed to compost, did you?) The first batch of food provided is said to represent the amount of grub, about $800 worth, that the average British adult throws out in the course of a year. It arrives on a trailer, and looks like more than enough to feed this whole group for a week.

"Dumped" wants viewers to realize that we're all living on top of a vast pile of rotting filth of our own making; it's just usually hidden from view. And the implications are scary. On a field trip to a neighboring landfill, where giant yellow bulldozers move mountains of trash, Rob reflects on how landfills even contribute to global warming by spewing methane gas. We are the landfill, and the landfill is us. However, it's only so entertaining to watch other people endure putrid smells. The first episode would have been more amusing if the contestants, despite their differences, didn't seem to like one another so much. The contestants could stand to take a cue from their surroundings and be more trashy.

And what about the show's message? Will staring into a giant pile of trash through the lens of reality TV inspire any viewers to change their profligate consumer ways? Maybe. Just as watching video of horribly abused cows going to slaughter renders some squeamish viewers vegetarians, surely there is someone out there who will be grossed out enough by the staggering mountains of trash in "Dumped" to commit to using the recycling bin more often, or taking those old clothes to Goodwill instead of tossing them out.

But as the contestants on "Dumped" reveal, even being forced to camp in rotting garbage in the name of eco-education won't reach everyone. A few contestants seem genuinely galvanized by their gritty sojourn into the nasty world of waste management. But the quitter who gives up before the end of the first episode has big plans for life post-dump: a two-week vacation to Vegas "burning more fossil fuels."