Based on his policies and the company he keeps, this year's Republican presidential candidate sounds a lot like the guy who ran in 2000 and 2004. 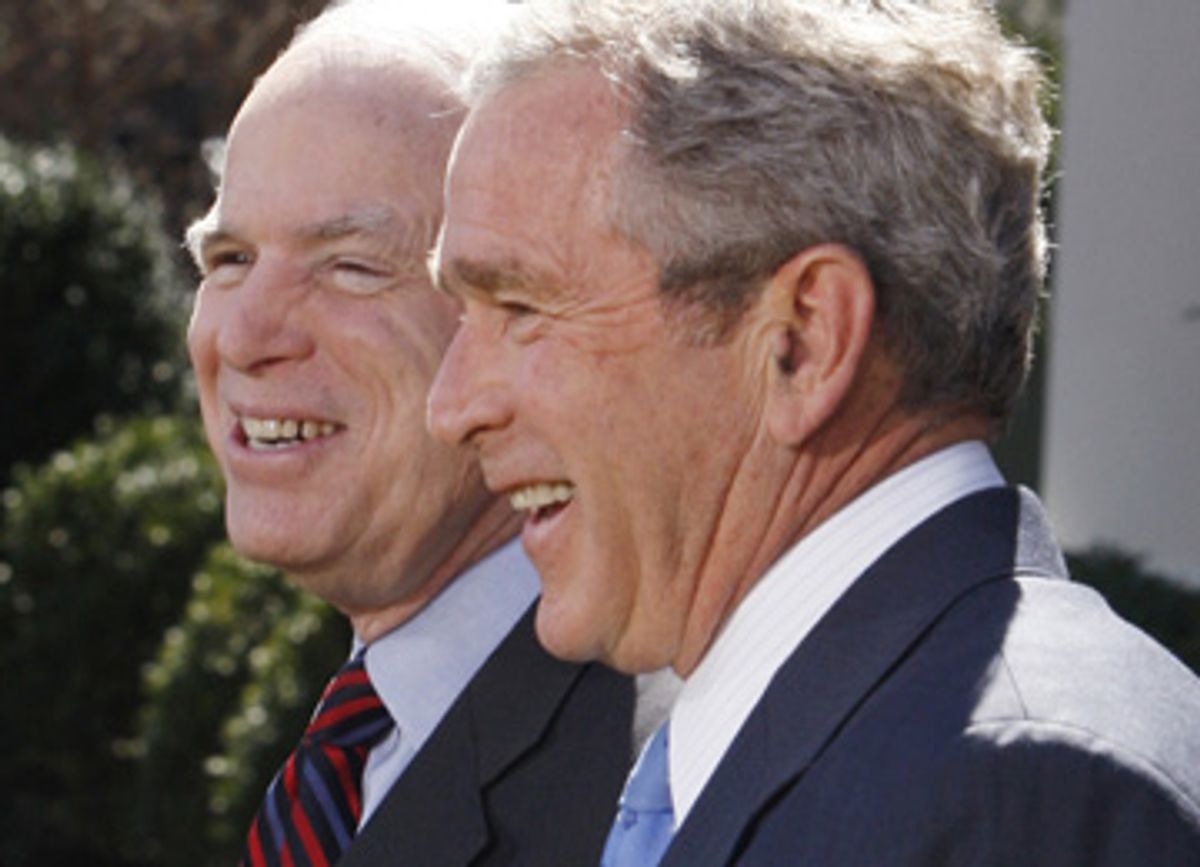 The most important thing about the endorsements proffered to John McCain by George W. Bush and evangelist John Hagee last week was McCain's reaction to them. The freshly minted Republican nominee for president, who has had harsh words in the past for both Bush's policies and evangelical "agents of intolerance," meekly accepted their support. He knows he cannot win in November if the evangelicals and pro-war conservatives stay home. How far will McCain go in presenting himself as Son of Bush in order to energize his party's base? To date, based on his willingness to embrace the Bush agenda and to associate with religious extremists, the answer seems to be pretty far indeed.

When John McCain went to the White House last week, President Bush seemed to be offering him an out. Bush "welcomed" McCain as "the Republican nominee" in his official statement, but didn't initially use the word "endorse." It was McCain who leapt for the e-word. "Well, I'm very honored and humbled," said McCain, "to have the opportunity to receive the endorsement of the President of the United States, a man who I have great admiration, respect and affection [for]."

McCain's strategists, meanwhile, are said to be privately plotting how best to deploy the deeply unpopular Bush, perhaps by quietly sending him to host fundraisers deep inside red states where he would not risk alienating the general population from McCain. But McCain is hewing so faithfully to Bush's legacy he may need no help from the man himself in alienating the population.

Whereas in his 2000 presidential bid, the Arizona senator sharply criticized Bush for appearing at the anti-Catholic Bob Jones University, which at that time also still banned interracial dating, he is less vocal about such matters now. He is himself behaving as Bush did then. McCain once dismissed evangelicals such as Jerry Falwell and Pat Robertson as "agents of intolerance." But last week the senator embraced Hagee's endorsement. Talk about an agent of intolerance! Hagee is like Pat Robertson on steroids.

The Democratic National Committee was quick to point out that Hagee said that Jews have faced persecution "right up to this very day" because they rejected Jesus and so demonstrated "disobedience and rebellion" toward Jehovah. He said that the difference between a woman with premenstrual syndrome and a terrorist is that you can negotiate with a terrorist. He said that Katrina was divine punishment on New Orleans for its sinfulness, and on gays for planning a parade there. He said that Roman Catholics were linked with Hitler "in a conspiracy to exterminate the Jews," and called the Catholic Church "the Great Whore." He suggested a faux "slave auction" as a church fundraiser. He told a startled Terry Gross on "Fresh Air" that the Quran directs Muslims to kill Christians and Jews. (In fact the Quran recognizes Christians and Jews as "people of scripture" and only urges the early Muslims to fight back against the militant "infidels" or polytheists who were trying to wipe them out.)

McCain reacted warmly to Hagee's endorsement, saying, "I am very proud of Pastor John Hagee's spiritual leadership to thousands of people and I am proud of his commitment to the independence and the freedom of the state of Israel." (Apparently for Hagee Israel is good, even if Jews are bad.) Pressed by Roman Catholics and others, McCain refused to distance himself from the pastor, saying only, "In no way did I intend for his endorsement to suggest that I in turn agree with all of Pastor Hagee's views, which I obviously do not." This non-disavowing disavowal has not satisfied most of the people offended by McCain's having associated himself with Hagee.

Hagee's endorsement is McCain's "Bob Jones moment," taken from the W. playbook of 2000. In other respects, McCain is trying to repeat Bush's big win of 2004, when he fended off a near-upset by a weak Democratic candidate by doubling down on fear. McCain has adopted foreign policy and domestic stances similar to those of Bush's successful reelection run.

In July of 2004, Bush abruptly announced that he was looking into whether Iran played a role in the Sept. 11 attacks on the U.S., and accused the Shiite ayatollahs of Tehran of harboring al-Qaida operatives, who are Sunnis. The whole fantastic set of allegations was immediately denied by Bush's own intelligence officials. Hawkishness toward Iran was one way for Bush to take the focus off his failures in Iraq. Bush by his belligerence appealed to a combination of evangelical holy warriors and so-called national-security conservatives, and McCain seems poised to move in the same direction.

Echoing Bush's fear-mongering about the Islamic world, which by August 2006, two years after his reelection, regularly included references to so-called Islamic fascism, McCain maintains that the "transcendent" challenge facing the United States in 2008 is "radical Islamic extremism." McCain alleges that "al-Qaida in Iraq" will "follow us home" if the U.S. withdraws from that country. McCain takes this line even though most Muslim countries are close allies of the United States and Osama bin Laden's al-Qaida has been revealed to be a small fringe, now in disarray.

Hagee's endorsement, meanwhile, brings more than white Protestant intolerance to the table. The organization he founded, Christians United for Israel, is lobbying for a war on Iran and dismisses last fall's National Intelligence Estimate finding that Iran has no active nuclear weapons program as "incompetent." McCain himself has joked about bombing Iran, to the tune of an old Beach Boys song.

George Bush has been closely wed to Pakistani dictator Pervez Musharraf, even in the face of the reverses of the last year, which have seen the general's fortunes plummet as he alienated the entire electorate by sacking the supreme court and ordering a ham-fisted invasion of a militant mosque. Even after Musharraf's party lost heavily in recent parliamentary elections, McCain insisted, "We appreciate the relationship we have with President Musharraf and hope to maintain that." Musharraf's high-handed tactics have turned the whole Pakistani population against him, and he seems set to be much weakened by a new alliance of the democratically elected opposition parties. McCain, like Bush, doesn't want to let go of the dictator.

Bush's signature project has been the war in Iraq, which he has managed like a veteran Las Vegas magician, with a misdirection and legerdemain that can make a whole elephant disappear. Despite nearly 4,000 U.S. soldiers killed, 30,000 wounded, hundreds of thousands of Iraqis killed, millions displaced internally and abroad, the creation of a new and serious terrorism problem, high fuel costs at home, and the entire lack of any obvious benefit from the whole endeavor to the American people, more than 40 percent of Americans now say the U.S. is making progress in establishing civil order in that country. McCain went to the same David Coppersmith School of Prestidigitation as Bush. He says he is dedicated to nothing less than complete military victory in Iraq and the maintenance of bases in that country for as much as a century, and his audiences do not appear to break out in derisive laughter. The bad news for McCain is that about 63 percent of Americans, a figure that has been fairly steady for the past year, continue to believe launching the war in the first place was a mistake.

Surely lack of health insurance for tens of millions, loss of good jobs, blighted cities like Detroit and New Orleans, and erosion of key civil liberties are a more "transcendent challenge" than the activities of small cultlike groups that are finding it harder and harder to operate on the soil of Middle Eastern and European allies of the U.S. But that's not to say that McCain isn't pushing a domestic agenda as well. McCain does have a domestic agenda. It's George Bush's.

On domestic policy, McCain's nostrums for the bad economy are job training and "tax cuts." As Paul Krugman once pointed out, "tax cuts" were Bush's response to each and every economic problem that arose, however unrealistic they were. Half of all the benefits of Bush's 2003 tax cut went to millionaires, and the sad impact on ordinary Americans of consequent lack of services and the diversion of wealth to the wealthy, has now become amply apparent. The more economically literate Republicans have caught on to Bush's "tax cut" shell game. Ironically, John McCain used to be one of them, declining to sign on to some of Bush's tax cuts. No more.

By "tax cuts," Republicans such as McCain mean lowering specific federal taxes on income and capital gains. This step would harm federal income, which will fall anyway if there is an extended recession, and would mainly benefit Americans in the top income brackets. A federal government with less income will be less able to pay for the services and job training ordinary workers and middle-class people need, especially in bad times. Moreover, in a recession, you want the government to spend more money, not less, which cannot be accomplished by reducing its income. McCain, like Bush, seems firmly stuck in 1929.

Bush championed the North American Free Trade Agreement, criticizing Sens. Clinton and Obama for saying they might pull out of it if Mexico and Canada declined to renegotiate some of its provisions. Bush is now pushing for a free trade agreement with Colombia, arguing it is necessary for "national security."

McCain is just as committed to NAFTA as Bush. Worried about the impact on U.S.-Canadian relations of Democratic attacks on the agreement, he said, "I want to tell our Canadian friends that I will negotiate and conclude free trade agreements and I will not, after entering into solemn agreements, go and say that I will abrogate those agreements." He denounced the Democratic candidates for risking "protectionism," and added, "One of the greatest assets we have in Afghanistan today, frankly, are our Canadian friends." He noted the unpopularity of the Canadian participation in the NATO mission there, which is part of a NATO contingent, given the 78 Canadian soldiers killed so far. He concluded, "We need their continued support in Afghanistan." Some 58 percent of Canadians reject the idea of extending their country's mission in Afghanistan past February 2009.

Both at home and abroad, McCain appears intent on abandoning some of his most deeply cherished personal values, including his commitment to secular values and distaste for religious bigotry, in favor of catering to the great W. coalition of white evangelicals and security-obsessed conservatives. Like Bush, his mantras are war and belligerence abroad, and at home, fear-mongering, "free trade," lower taxes on the wealthy, and "job training" for the increasingly miserable middle classes. If he is elected, it will be "Groundhog Day," the Bill Murray film about a character doomed to live through the same day over and over again. It will be the last eight years that we will suffer through again under a President McCain. Only worse, because we have already eaten so much of our seed corn.