Sure, there are lots of sweaty, speech-spouting men in powdered wigs, but HBO's "John Adams" presents a surprisingly gritty portrait of our nation's second president. 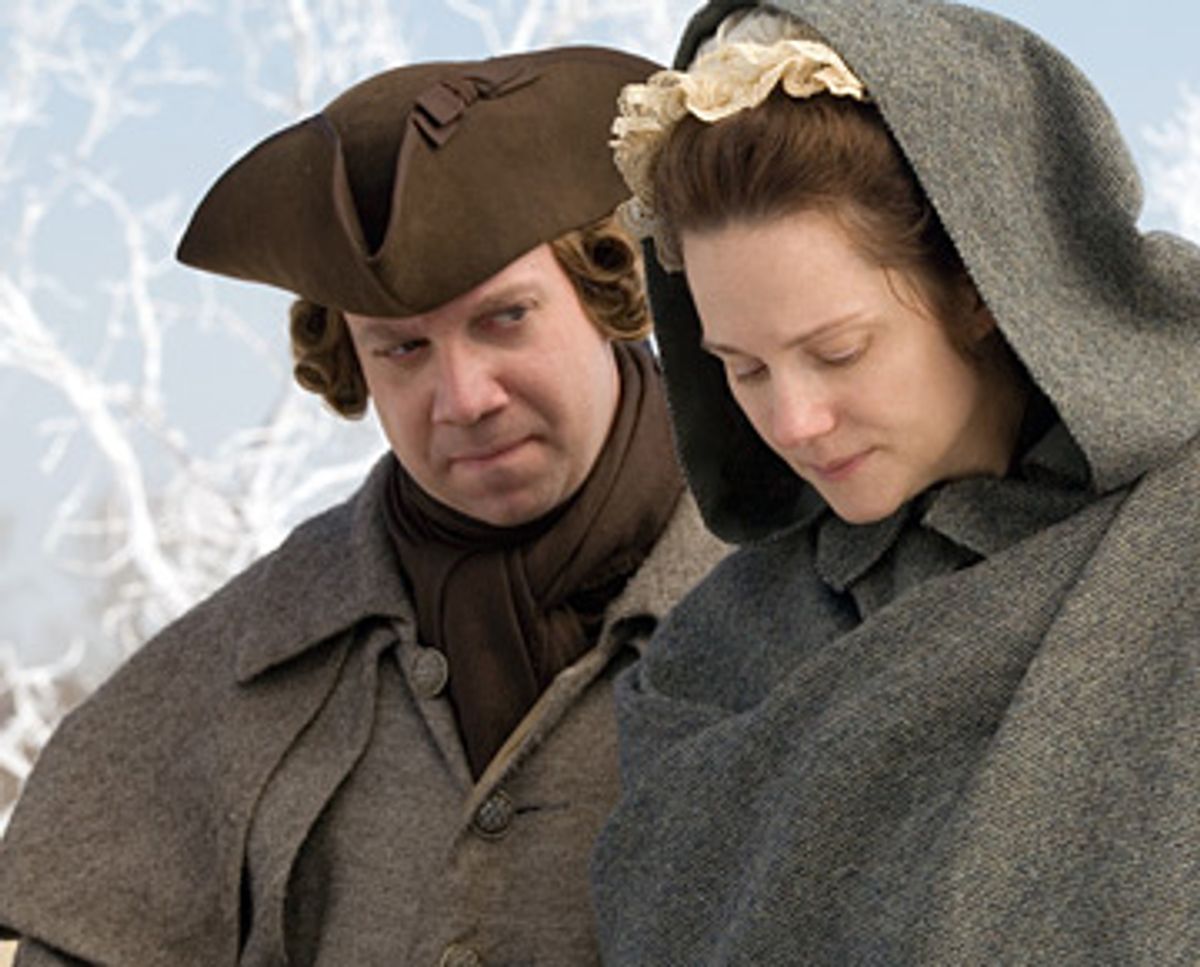 In the first scene of HBO's seven-part historical miniseries "John Adams" (premieres 8 p.m. Sunday, March 16), a blurry figure makes his way toward us, slowly, through a blizzard. He's riding a horse, huddling against the bitter cold. This is John Adams, one of the forefathers of this great land of ours, a lawyer in Boston arriving home after a trial. But that's not what concerns us.

"There's going to be a lot of gout in this miniseries," we say to ourselves. "There's going to be dysentery and dropsy and lockjaw and smallpox and ship fever, and lots of farm animals being slaughtered, blood spattering spectacularly all over the hay."

After scraping ice from his horse's hooves, Adams (Paul Giamatti) greets his wife, Abigail (Laura Linney), who has a scrubbed face and a look of maternal sympathy for her round little man. "You lost," Abigail says. "I could tell by the set of your shoulders." Adams grumbles about the trial, something about a neighbor's crops and a horse that's hard to make out.

Suddenly there's a commotion outside, and Adams runs out, thinking that it's a fire. Instead he finds a handful of men and boys, shot to death in the square by some bewildered-looking British soldiers. Adams is horrified, but ends up representing the soldiers in a trial because no one else will take on their case. He argues that the crowd threw stones at the redcoats and dared them to fire their guns. Despite the colonists' growing resentment of the British, Adams wins the trial with a combination of acuity and stirring oratory -- and more than a little coaching from his wise wife, who urges him to "mask your impatience with those less intelligent than yourself."

In a white, powdered courtroom wig, Giamatti looks just like a cartoon dog -- doleful in a comical way. Somehow this only makes us root for Adams all the more enthusiastically, even as we say to ourselves, "There will be lots of ridiculous wigs in this epic miniseries, and there will be many red-faced men, making long-winded, spitty appeals to echoing rooms filled with other men in wigs and absurd ruffled blouses."

Remember when the epic television miniseries featured earth-shattering romances and big, shiny stallions and riotous town meetings with heroes and villains clearly delineated? The founders of our great nation would fight valiantly and give speeches that moved crowds of attractive blonds to tears, and then they'd get on their horses and ride off to fight the bloodthirsty redcoats.

But these are the days of David Milch's "Deadwood" and Paul Thomas Anderson's "There Will Be Blood" and this is HBO, home of the story that's stubbornly grubby and full of stuttering and awkward moments and buzzing flies. The trend has swung past realism to realism through a dirty window, realism with a bad attitude and a hangover.

Based on the book by David McCullough and directed by Tom Hooper, "John Adams" counterbalances heroism -- this was a man who helped to liberate the colonies from British rule, after all -- with dreary details: Abigail Adams is left at home with her children in the dead of winter, while her husband is off fine-tuning the language of the Declaration of Independence with other noble men. Abigail writes John love letters, sure, but she's also forced to grab a rifle and run to the door of their farmhouse at any sign of trouble. She and the kids witness haunting sights of injured Americans return from battle with the redcoats. And in the hopes of dodging the smallpox epidemic, the family endures a gruesome inoculation. Yes, here are the perils that were foreshadowed in that first wintry scene!

But it's the casting of Giamatti as Adams that says it all. Giamatti is an almost defiantly ordinary-looking man, and that's a crucial detail as far as author David McCullough is concerned. In his book, the caption underneath the first paintings of a puffily wigged Adams and his wife reads, "Her decided nature is clearly evident, while he might be almost any untested, well-fed young man of the time." I believe what he means to express is that Adams looks like a fat frat boy with a squirrel glued to his head.

Giamatti has always had a particular handle on uneasy, preoccupied characters, like Miles in the Oscar-winning film "Sideways" or comic book writer Harvey Pekar in "American Splendor." He worriedly purses his lips. His sad eyes dart around the room. He wears his self-doubt like a cheap, ill-fitting suit. We can see how principled Adams is, that he's an effective lawyer and a fine citizen who's anxious to choose the right path for the colonies. But as Giamatti shows us, the role of the hero is not a natural one for Adams, particularly in light of the charismatic leaders who surround him at the First Congress: George Washington (David Morse) speaks in phrases so self-sacrificing and honorable, a speechwriter couldn't have crafted anything better. Thomas Jefferson (Stephen Dillane) is dashing and sharp and is enlisted by Adams to write the first draft of the Declaration of Independence. And then there's Ben Franklin (Tom Wilkinson), who brings a much-needed jocular air to the otherwise somber proceedings.

In fact, unless you're fascinated by the particular debates that took place at the First Congress or you relish the old-fashioned miseries that loomed ever present in this harsh new world, the first two episodes of "John Adams" will range from somewhat taxing to sleep-inducing. Sometimes it seems as if the dialogue was written by lawyers thrilled by the logic and fundamental principles hashed out in each historic argument. There are no grand battles. There are no sweeping epiphanies. There's just a roomful of men, sweating over the audacity of their claims of independence, sweating and wondering if it will be the death of them.

But don't let the hardships and the endless deliberating discourage you from staying the course. Episode 3 may open with more unpleasantness -- Seasickness! Sawed limbs! Abigail toiling in the fields with her young children! -- but things get much more lively when Adams and his eldest son join Benjamin Franklin in Paris, to help persuade the French to align themselves with the American troops. A universe apart from the righteousness and grueling work of revolution in America, the French seem to want only good wine, good music and good sex, damn them! In this environment, Adams, with his stodginess and his unrelenting sense of duty, is utterly at sea, much to the amusement of those giggling, white-faced French aristocrats. "France is the very region for happiness, if human nature could be made happy by anything that pleases the senses," he remarks dryly to the Comte de Vergennes.

Franklin's charm and wit make him a rock star in France, while Adams is seen as stuffy and joyless. Without his wife's wisdom to guide him (correspondence from her takes months to reach him, with many letters lost or stolen along the way), Adams grows resentful of Franklin's idleness and popularity and eventually he falls ill, which of course means night sweats and bloodletting and rooms spinning out of control.

Even so, a few hours into the miniseries these hardships feel less like the abuses of a narrow screenwriter bent on emphasizing ugliness at all costs and more like a colorful but needed counterweight to the valiant, heroic depictions of yore. These were ordinary men with ordinary limitations, and the particular challenges of the times, from long absences to illness, play a significant role in the story. Not only that, but there's a sense of humor in the storytelling that reveals itself very slowly. When Adams finally returns to America with Abigail, who had joined him abroad, there's a big crowd and much fanfare, but Adams hardly recognizes his children. While his wife embraces each child fondly, Adams stands by with an awkward grimace. This is a moment that would be clipped from the grand celebration scene you'd find in a more glorious portrait, but it provides a sad but slightly droll glimpse of Adams, in all of his clumsy, envious imperfection. Far from epic, "John Adams" is a biopic as intense and moody as the man himself.