A sickening truth at Guant

A gravely ill detainee I represent, never charged with a crime, has been neglected by military doctors. Will he be the next to die inside the notorious prison? 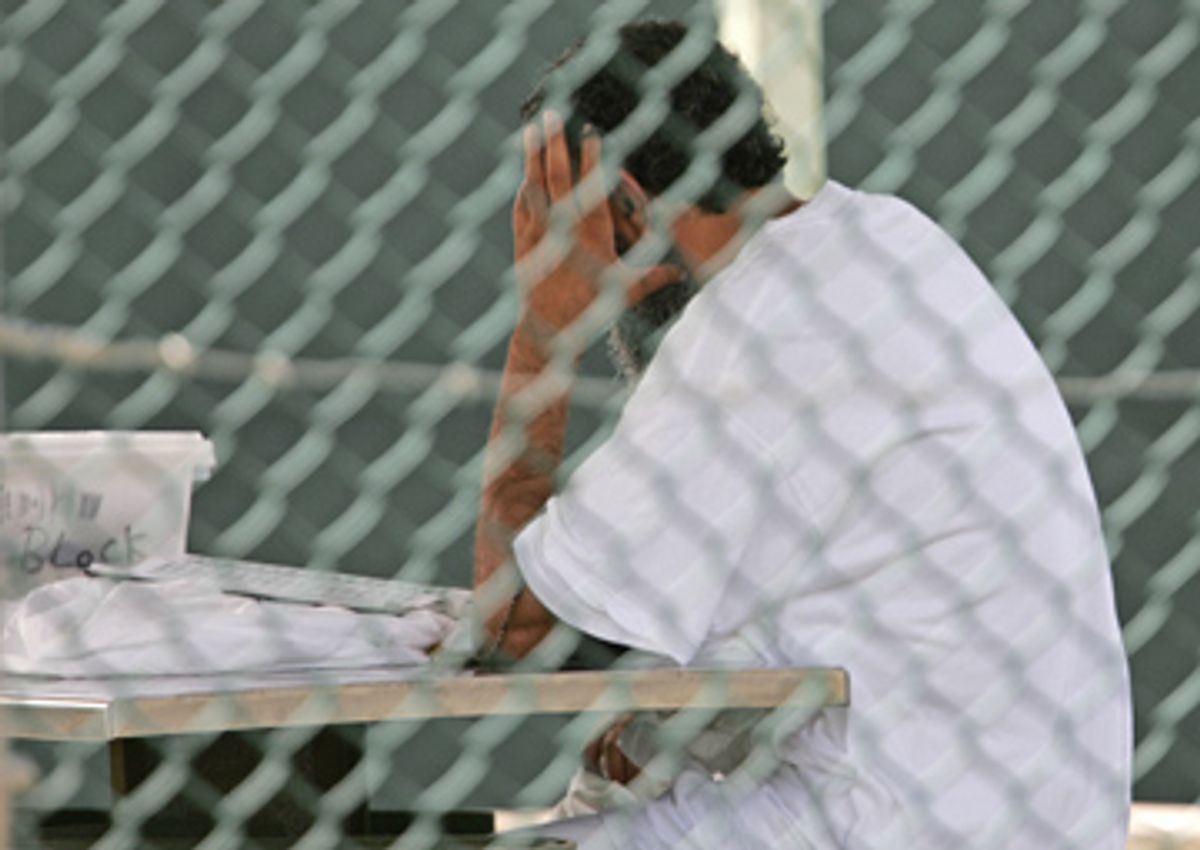 The U.S. government has long insisted that it provides quality medical treatment to all suspected terrorists imprisoned in Guantánamo Bay, Cuba. Even the dependably cynical Michael Moore, in his latest film "Sicko," fell for the hype. But it is time to set the record straight. Five prisoners are now known to have died inside the secretive prison -- at least one under dubious circumstances -- and others are gravely ill. And in the case of one very ill man, there is evidence of extraordinary medical neglect on the part of military physicians.

I am an attorney representing that man, Abdul Hamid Al-Ghizzawi, who has been held inside America's legal black hole since March 2002. The U.S. government has never charged him with any wrongdoing. Military officials claim he has been given proper healthcare. But Al-Ghizzawi appears to have acute liver disease, among other ailments, and the military is allowing his condition to deteriorate without proper diagnosis or treatment, according to a doctor with the International Committee of the Red Cross who has observed Al-Ghizzawi and his medical records at the prison. A leading medical expert who has reviewed Al-Ghizzawi's case agrees with that conclusion, as do I, based on my observations of my client during repeated visits to Guantánamo. Military and government officials have refused to grant me access to my client's medical records.

Al-Ghizzawi, now 45, is a Libyan-born man who had been living quietly in Afghanistan with his Afghan wife. They had a small shop selling honey and spices that they later expanded to a bakery. They have a young daughter, now 6 years old, whom Al-Ghizzawi last saw when she was just a few months old. When the American bombs started to fall in late 2001 on Jalalabad, the city where Al-Ghizzawi lived with his family, he did what most people would do: He fled. He took his wife and infant daughter to his wife's parents' home away from the city. Unfortunately, Al-Ghizzawi was not well known in his in-laws' village. Bounty hunters turned Al-Ghizzawi over to the Northern Alliance in December 2001, who then handed him over to the United States. (Our government offered millions of dollars for captured "murderers and terrorists," and few questions were asked when Arab men were turned over for those bounties.) By March 2002, Al-Ghizzawi was sent to Guantánamo, where he was never charged with a crime or given the opportunity to prove his innocence.

The military eventually used so-called Combatant Status Review Tribunals to justify holding prisoners at Guantánamo without the due process on which our legal system is based. But in Al-Ghizzawi's status review in November 2004, the tribunal unanimously found him not to be an "enemy combatant" (as was determined to be the case with some 35 other prisoners). The U.S. government proceeded to convene a second tribunal using exactly the same "evidence" against Al-Ghizzawi found to be worthless the first time around. One of the officers who sat on the first tribunal, Lt. Col. Stephen Abraham of the Army Reserve, testified to Congress in July 2007 that the evidence against Al-Ghizzawi was "garbage." In the meantime, Al-Ghizzawi has not been allowed to see or talk to his wife and young daughter for more than six years.

The duration and isolation of his indefinite confinement are appalling enough, but now Al-Ghizzawi appears to be dying of liver disease. Eighteen months ago, in August 2006, I filed an emergency motion with the U.S. District Court in Washington, D.C., to try to get copies of Al-Ghizzawi's medical records, which the government refused to turn over. Bush administration lawyers submitted an affidavit in response from the then medical director at Guantánamo, Dr. Ronald Sollock, who acknowledged that Al-Ghizzawi had a "history of hepatitis B," and stated that the military had run "routine" tests on Al-Ghizzawi. The results, he said, came back "normal." Sollock also noted in his affidavit that Al-Ghizzawi became infected with tuberculosis while at Guantánamo. This was the first that Al-Ghizzawi had learned of his having a "history of hepatitis B" and of being infected with tuberculosis. But U.S. District Judge Bates denied my motion to gain access to the medical records.

Shortly thereafter, in December 2006, Al-Ghizzawi was moved to Camp 6 at Guantánamo, a maximum security facility where prisoners are kept in total isolation. When I protested to military officials about this seriously ill man being put in such harsh conditions, I was told that Camp 6, which had just opened that month, was the new prison facility for the "general population." I was given no other explanation as to why Al-Ghizzawi was moved there.

I brought Al-Ghizzawi's ill health to the attention of the International Committee for the Red Cross. Representatives of the ICRC who are granted access to Guantánamo and its population have watched the medical deterioration of some prisoners there, but they are apparently helpless to do anything to stop it. One ICRC doctor, expressing anger and frustration, told me that he had sought healthcare for Al-Ghizzawi after looking at his test results from the military, but said that military officials had ignored him. He also told me he believed that Sollock's affidavit appeared to have been written to conceal or downplay Al-Ghizzawi's test results, rather than adequately explain them to the court.

When I visited Al-Ghizzawi last October, he told me that a military doctor had finally conceded that he had a severe liver infection. According to Al-Ghizzawi, the doctor asked to do a liver biopsy, but also told Al-Ghizzawi that the procedure was dangerous and could damage his organs. (The military has denied that anyone spoke to Al-Ghizzawi of such a risk.) Al-Ghizzawi declined the biopsy, and the medical staff has apparently failed to treat his liver infection. But according to Dr. Juerg Reichen, a leading expert on liver disease who has reviewed Al-Ghizzawi's case, a biopsy would not have been necessary to diagnose and treat him properly.

I filed another emergency motion on my client's behalf in February. Judge Bates then ordered the government to update him on Al-Ghizzawi's health, and in mid-February the government submitted an affidavit from the new medical director at Guantánamo, Dr. Bruce Meneley, a dermatologist by specialty. In that Feb. 15 affidavit, Meneley admitted that tests were performed on Al-Ghizzawi as far back as November 2006 -- shortly after the judge had denied my initial request for medical records -- showing that Al-Ghizzawi's liver was not "normal" as Sollock had testified in October 2006.

So why did military doctors, after learning of Al-Ghizzawi's liver problems in fall 2006, fail to start treating him properly, and instead move this ill man to the isolation of Camp 6? The answers to these questions remain unknown. But Reichen, the expert on liver disease, said in an affidavit submitted to the court on Feb. 19, "It is evident that [military doctors at Guantánamo] withhold information without any military value, misinterpret it and try to withhold treatment from Mr. Al-Ghizzawi."

I continue to visit with Al-Ghizzawi every other month for two days at a time, and monitor his dying. In our meetings we talk about his legal case and his family, but mostly we discuss his deteriorating health. Al-Ghizzawi has become weaker and weaker and at times he is barely able to talk. Each of the last few times that I saw Al-Ghizzawi I thought I would not see him alive again. Our most recent meeting was on Feb. 26 and 27, after which I filed a memorandum updating the judge about his ill health.

To date, five men are known to have died at Guantánamo. One died recently from cancer. The military claims that the four other deaths were suicides, including the death of Abdel Rahman Al Amri, a Saudi man, whose death in May 2007 the military referred to as an "apparent suicide." But the military refuses to release the results of their investigations into those deaths.

With his own death looming, Al-Ghizzawi has given me his last will and testament and instructions for the disposition of his remains. I don't have the heart to tell him that one simple request will almost certainly never be granted by our military: to have his remains tested to see exactly what killed him, so that if such testing does confirm a history of hepatitis B, his wife and daughter can be tested to ensure their health is not compromised by this same disease.

I am a solo practitioner with more than 25 years' experience as an attorney. I knew how expensive and difficult taking on Al-Ghizzawi's case could be when I started it, but I chose to represent this man because his case is as important as it gets. With Guantánamo, our government has turned its back on the rule of law and thumbed its nose at the rest of the world. It is up to the rest of us to try to set things right.

In the emergency motion filed in February, I asked Judge Bates to tell the government "enough is enough" and to move Al-Ghizzawi to a competent civilian medical facility before he dies. The government is expected to file its response to the motion on Friday, and Bates will likely rule shortly thereafter. For Al-Ghizzawi, it may already be too late.

H. Candace Gorman is a civil rights attorney based in Chicago. She maintains a blog about Al-Ghizzawi's case.Gorman is grateful for the assistance Seth Farber in producing this article.