Dennis Hopper scrapes the bottom of the perversion barrel in this miserable tale of hardship. 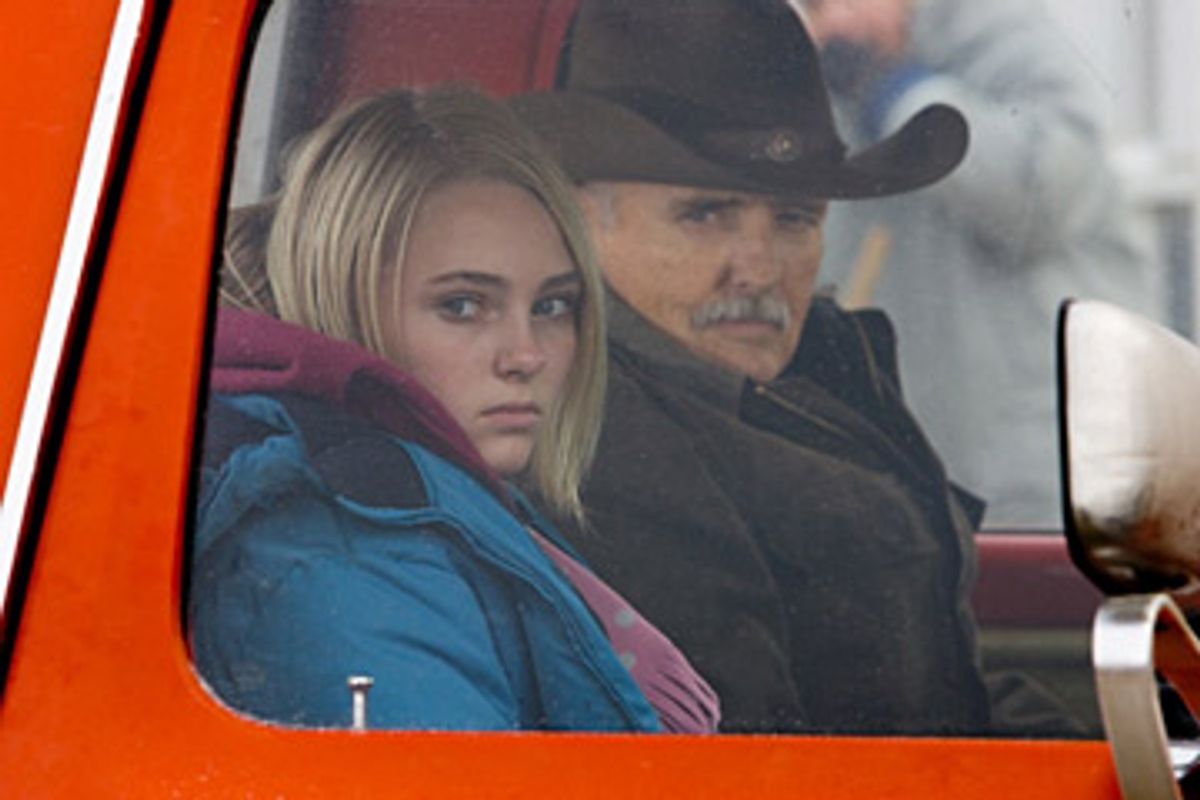 If you've been longing to see Dennis Hopper as an unhinged rancher barking at a young girl to get on her hands and knees and clean up that horse manure, now, then "Sleepwalking" is the movie you've been waiting for. Apparently, at some point even Hopper has to scrape the bottom of the barrel when it comes to perversions: Snorfeling amyl nitrite and stuffing scraps of velvet into his mouth? Been there, done that.

"Sleepwalking" is the directorial debut of William Maher; the writer is Zac Stanford (who wrote the Sundance-y suburban drama "The Chumscrubber"). Charlize Theron, who also has a small role in the movie, is one of the producers. This is one of those pictures that get made because people believe in it: The filmmakers' and the actors' commitment is like a signal that blinks at us from the screen with a nearly radioactive glow. But instead of earning our respect, the movie runs the risk of exhausting us with its drab earnestness. Early in the picture, I winced at a lingering shot of blue-white snow on a barbed-wire fence: A shot like that alerts us that we're about to see a movie about the hardships of life -- one in which the actual characters take a backseat to the idea of hardship. Because face it: Human beings can never measure up to the grandeur of suffering as an abstract quality.

And there's loads of suffering in "Sleepwalking," piled on until the picture almost becomes an unintentional comedy. Theron plays Joleen, a feisty single mom who has clearly become frustrated with her sullen, smart-alecky preteen daughter, Tara (AnnaSophia Robb, who appeared in "Bridge to Terabithia" and "Charlie and the Chocolate Factory"). Joleen's life isn't easy: Her boyfriend has just been arrested, and she and Tara have been kicked out of the home they shared with him. She turns to her younger brother, the sweet-natured and generous James (Nick Stahl), for help. She and Tara move into his bare-bones apartment and then, seemingly on a whim, Joleen takes off, leaving James to care for Tara -- a task that's nearly impossible, since he seems barely able to take care of himself.

The rest of "Sleepwalking" is about the bond that's forged between these two characters -- and, of course, about how hard life can be for two characters at the mercy of filmmakers who think a nonstop pileup of bad luck is the same thing as dramatic development. Crummy foster homes, sad motels, damp basements outfitted with grim, stained mattresses, the aforementioned farm where Hopper (as James' and Joleen's long-estranged dad) reigns as a nutcase king: These are the increasingly depressive settings in which James and Tara's voyage of discovery takes place. Because, of course, "Sleepwalking" is ultimately a story of triumph and transformation, but the characters (not to mention the audience) need to be punished first.

"Sleepwalking" is a frustrating case because Stahl, Robb and Theron all give performances that are subtle, delicate and smart -- it's just that they're steamrollered by the movie's relentlessness. When Woody Harrelson shows up, in a small role as one of James' co-workers, a construction worker and cutup named Randall, the movie temporarily opens up and breathes a little: Harrelson's idiotic wisecracks are a welcome sign of life in the movie's forcedly bleak emotional landscape. Come to think of it, the movie's physical landscape is pretty forcedly bleak too: James and Tara embark on a road trip that takes them from Northern California to Utah; from one minute to the next, with no rhyme nor reason, they might drive past thriving greenery, brown shrubs or snow -- we can never tell exactly where they are because the scenery around them fails to make any geographic sense.

The picture does feature a nicely staged motel swimming pool scene, in which Tara stretches out poolside wearing a pair of oversize pink sunglasses that conjure up images of Stanley Kubrick's Lolita. It's hard to tell if this is a dream sequence, and maybe we're not supposed to care. But that's a strange lapse in a movie that works so hard to rub our noses in reality. "Sleepwalking" strives to be heartfelt, instead of simply allowing us to feel.