It's not just the Bush-Cheney oilmen who don't want to list the polar bear as threatened. It's also the trophy hunters and Inuit tribes. 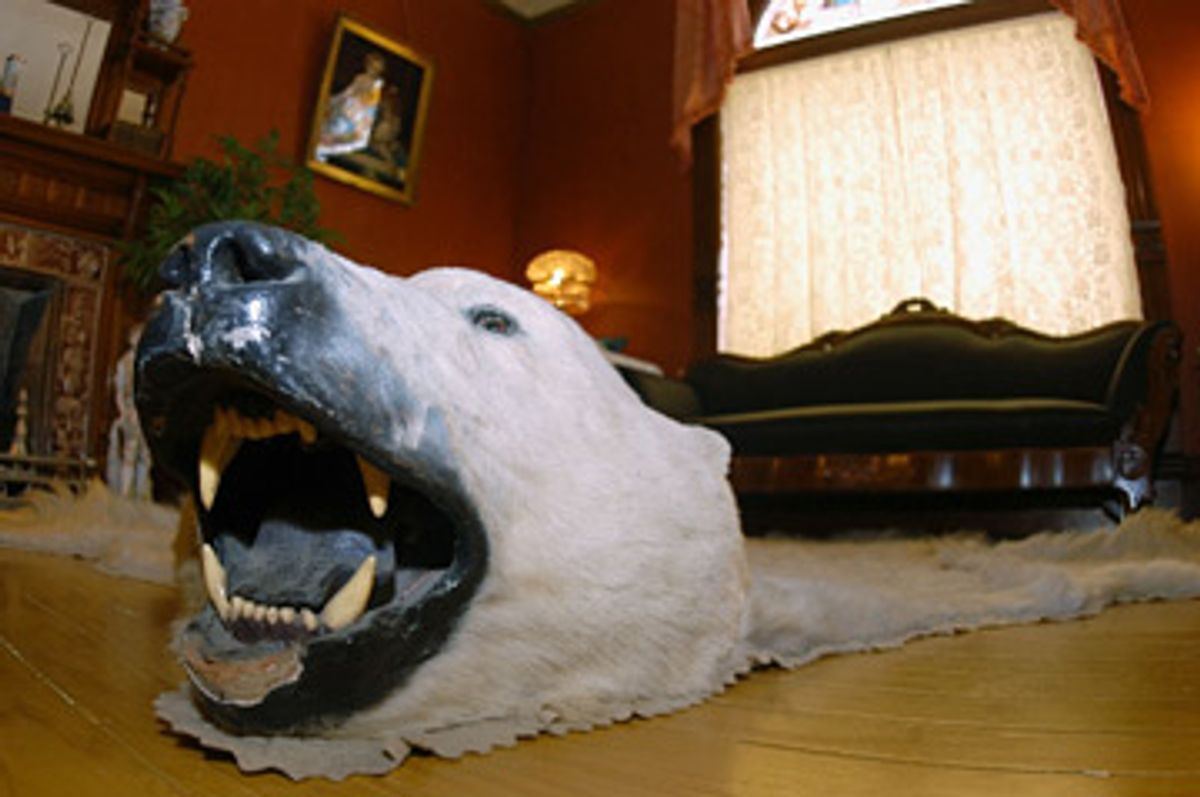 If your idea of a good time is paying $25,000 to journey to the frozen north in Canada to shoot a polar bear -- making you one of the more than 50 American "sportsmen" who do so every year -- you're not happy about the lawsuits and recriminations over whether the Bush administration should grant new protections to polar bears. After all, those darn regulations could interfere with your bringing home a furry white rug for your living room floor.

In the reams of press about the increasing deaths of polar bears, the role of trophy hunters and the Inuit who help them is often missing. In the Canadian territories where the polar bear lives, the government sets quotas for the number of bears that can be hunted each year. The Canadian Inuit, who are paid by hunters to help them stalk the bears, and American hunting associations have become vocal adversaries to environmentalists and Congress members who in recent months have battled the Department of Interior, with its Bush-Cheney oil connections, to safeguard the polar bear.

Today, there are between 20,000 and 25,000 polar bears worldwide, according to the World Conservation Union Species Survival Commission's Polar Bear Specialist Group, which lists the species as "vulnerable." Between 700 and 900 polar bears are shot every year, the majority of those taken in Canada, according to Andrew Derocher, a biologist at the University of Alberta, who chairs the Polar Bear Specialist Group. Of the approximately 600 polar bears shot in Canada, about 15 percent of those are killed by sports hunters, many of them American, who pay between $20,000 to $35,000 for the chance to do so.

Should the species be listed as threatened under the Endangered Species Act, American hunters could still go to Canada to try to kill them. But the hunters would be less likely to make the journey because they'd face more problems importing the head or hide. And, really, who wants to shoot a polar bear if you can't mount its ferocious, teeth-baring head on your den wall to show off to your buddies? "They would have no incentive to kill the creature if they could not keep the trophy," says Michael Markarian, executive vice president of the Humane Society of the United States. "It's all about putting the bear skin on your living room floor, or the polar bear head on the den wall. They want the spoils of the hunt, and the bragging rights."

In fact, hunters earned the right to import polar bear heads and pelts through their own lobbying. These days, you can't go to Japan and buy endangered-whale meat, or to Canada and purchase a seal skin, and bring those animal parts back to the United States. Until 1994, under the Marine Mammal Protection Act, polar bear heads and hides were treated the same way. Then, sports hunters persuaded Congress to let them bring their bear trophies home, and a loophole was written into the Marine Mammal Protection Act to accommodate them.

"The trophy hunters made the argument that they had all these polar bear trophies in storage in Canada," Markarian says. "They had shot these bears legally in Canada, but they were forbidden from bringing home the head and hide." Congress took pity on the trophy hunters and allowed them to bring their souvenirs home. "Unfortunately it has now served as an incentive for more Americans to kill more polar bears in Canada," Markarian says. In the last decade, more than 800 permits have been granted by the U.S. Fish and Wildlife Service to import polar bear heads and hides to the United States. The agency does forbid the importing of some trophies from animals shot from polar bear populations it deems vulnerable, but it approves the overwhelming majority of requests.

With the polar bear listed in the United States as threatened, American hunters would face new hurdles in importing them. The prospect of losing revenues from hunters has the Canadian Inuit worried and has caused them to break ranks with their traditional environmental allies. Mary Simon, president of Inuit Tapiriit Kanatami, a Canadian organization representing some 40,000 Inuit, has accused environmental groups of "using the polar bear for political reasons against the Bush administration over greenhouse gas emissions, and as Inuit we fundamentally disagree with such tactics."

Pressure from the Canadian Inuit and trophy hunters has complicated a stormy battle over winning the polar bear official protection. With some bears already drowning and starving, environmentalists and Congress members have blamed the listing delay on the Bush-Cheney administration's close ties to oil and gas industries.

This February, with the polar bear protections stalled, the Minerals Management Service, a part of the Department of the Interior, leased prime polar bear habitat, 29 million acres in the Chukchi Sea, for oil and gas drilling to the tune of $2.6 billion. Protection under the Endangered Species Act could prevent the federal government from taking actions, such as authorizing mineral extraction, that would harm the habitat of protected species.

The Interior Department's inspector general has begun an investigation into why the polar bear listing has been delayed while oil and gas leases were handed out. The Center for Biological Diversity, the Natural Resources Defense Council and Greenpeace, filed suit on March 10 over the Bush administration's months-long foot-dragging over announcing whether the polar bear will be listed as "threatened" because of global warming.

"Our lawsuit has forced the Bush administration's hand on the issue of global warming like no other," says Kert Davies, research director at Greenpeace USA. "If the federal government is really serious about protecting the polar bear, then its next steps will be to cancel lease sales in the Chukchi Sea and immediately implement a plan for deep cuts in U.S. global warming pollution."

Indeed, scientists say time is running out for the polar bear, due to warmer Arctic temperatures melting the sea ice where the bears hunt for seals. By 2050, scientists at the U.S. Geological Survey predict, two-thirds of the world's polar bears will have vanished as a result of global warming melting their icy habitat, and there will likely be no more polar bears living in the United States at all.

The Polar Bear Specialist Group listed polar bears as vulnerable in 2006, due largely to the impacts of global warming, the effects of which are already being documented in the West Hudson Bay population. In 2007, the Nunavut government cut the polar bear hunting quota by about one-third in West Hudson Bay.

For their part, Inuit groups in Canada argue that shooting polar bears is not all about cold hard cash but about culture too. When the bears are killed for sport by Americans, their meat is used locally in accordance with local customs. "Even with the sport hunts, we use dog teams, a portion of tags also go toward subsistence harvesting, and we ensure that all the meat and other parts of the polar bear are fully utilized," says Duane Smith, president of the Inuit Circumpolar Council. "Our hunters and guides benefit economically, and we are able to continue with our culture, enjoy the benefits of what we use, and ensure that this is done in a responsible and sustainable manner."

In the United States, it's illegal to shoot a polar bear for sport. But Inuit living in Alaska have the right to hunt a limited number of them for subsistence. They've taken a different position on the polar bear listing issue than their brethren in Canada: The Alaska Nanuuq Commission supports the listing of polar bears under the Endangered Species Act as long as it allows subsistence hunting by the Inuit.

If polar bears are listed as threatened, sports hunters want an exemption under the law to import their heads and hides, just as they now have under the Marine Mammal Protection Act. That would disappoint the Humane Society of the United States. "We believe that since American law prohibits the killing of these creatures within our own borders, the spirit of the law should prevent Americans from causing harm to these creatures in other countries," Markarian says.

Hunters contend that the U.S. Fish and Wildlife Service, which oversees the Endangered Species Act, can't use the impacts that global warming may have on the polar bears in the future to justify listing the bear now. "Predicting the nature and extent of any future climate change and its impact on the Arctic and polar bears is an incredibly complex and speculative endeavor," Ralph Cunningham, president of Safari Club International, a lobbying group for hunters, has said. "The science is full of uncertainties. The Service cannot make the affirmative finding of future endangerment necessary to list a species as threatened under the ESA."

Sports hunters have also argued that their fees grant the native groups an incentive to preserve the bears. "Sport hunting, especially by U.S. hunters, brings significant dollars to remote native communities in Canada," Doug Burdin, an attorney for Safari Club International, has said. "To go along with the intrinsic value these people place on the polar bear, this economic benefit makes the polar bear valuable to these people, encouraging them to better conserve and manage the bear."

That may be, says Kassie Siegel, director of the climate, air and energy program for the Center for Biological Diversity. But in long run, without major steps to curb global warming and preserve the polar bears' Arctic homes, "you're not going to have any sport hunting anyway."