Quit arguing about who would be more electable in November. You both have strengths -- and weaknesses -- on the electoral map against John McCain. 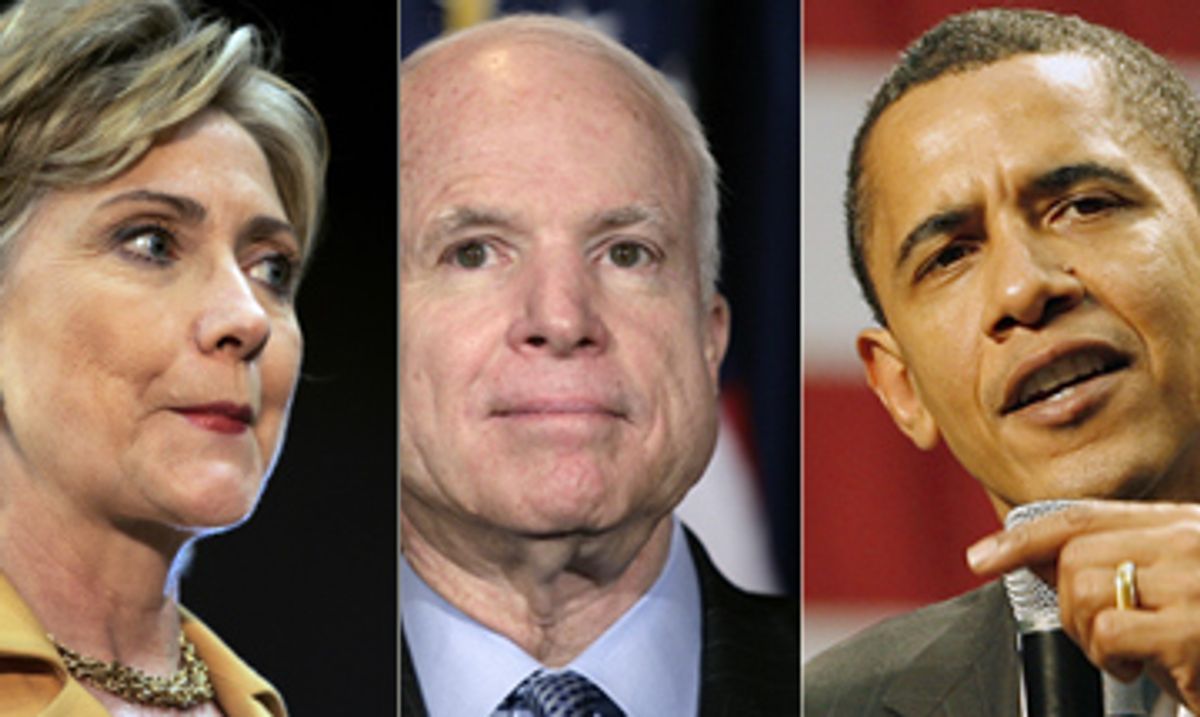 Memo: To the Hillary Clinton and Barack Obama campaigns, and everyone working for those campaigns who sends me endless e-mails

Re: Whether or not your candidate is more electable than the other candidate, and whether primary and caucus results predict how your candidate would fare in the general election

Date: Today and, for the sake of our collective sanity, every day from this point forward

To begin with, let me emphasize that I'm kidding, kind of, about the sanity part. I really do enjoy the daily barrage of "electability" e-mails I receive from each camp. The relentlessness of the spin is awe-inspiring. Consider me impressed that at 3:07 p.m. on March 12, I got an e-mail from Team Clinton titled "Keystone Test: Obama Loses Ground," about how Obama has lost all the big states except Illinois and will lose Pennsylvania too, and that two hours and 58 minutes later I received an answer e-mail from Team Obama titled "Spun Out." "More than half of the votes that Senator Clinton has won so far have come from just five states," it asserts. "And in four of these five states, polls show that Barack would be a stronger general election candidate against McCain than Clinton." Color me overjoyed that the next day the dueling e-mails began at 8:27 and hadn't stopped at 7:55 p.m. I love the conference calls too. The Obama campaign did three on Wednesday alone, one of which summoned three Democratic governors and one senator from swing states that Obama has won to make the case of his electability.

The squabbling of the past week is understandable. We've moved past the issues portion of the contest into the championship round, which is all about which of the two Democratic candidates could carry enough swing states to beat John McCain. But I know the back and forth is getting to you. Otherwise on a Wednesday conference call with the national press, Obama campaign manager David Plouffe wouldn't have snapped, sarcastically, "Only states that start with the letter 'N' count," belittling Clinton's good luck in every "N" state except Nebraska and North Dakota. And on a call the next day, Clinton pollster and strategist Mark Penn wouldn't have blurted, "Obama really can't win the general election."

So I'm offering my services as a mediator. In making your respective cases for electability, each of you has attempted to extrapolate evidence from the statewide primary and caucus results. And the evidence you've presented isn't very convincing. Both of you can't be wrong -- one of the two candidates, logically, has to be less electable, even if the difference is infinitesimal. And maybe both of you are right. Maybe each candidate is electable enough, meaning capable of assembling a specific coalition of voters and collection of electoral votes that will be enough to vanquish John McCain in November. Maybe each candidate is capable, in his or her own way, of winning -- or losing.

Herewith, point by point, is my take on the various arguments you have both been pelting me with for the past week or more, and why I don't find them persuasive.

1. Just because your guy or gal won a state's primary doesn't mean you're going to win it in the general. Obama has about as much chance of carrying Mississippi in November as Hillary does Oklahoma. John Kerry won 47 out of 50 state contests four years ago -- remind us again how that worked out for him in the general election?

2. Conversely, just because your opponent lost a state's primary or caucus doesn't mean McCain will win that state if your opponent is the Democratic candidate. If anyone thinks Hillary is going to lose Vermont or Obama is going to lose Massachusetts, they need to recheck George Bush's 2004 losing margins in those states. One Pennsylvania poll shows Clinton beating Obama comfortably in next month's primary, yet another shows Obama faring better than Clinton against McCain in the Keystone State in November. I'd say, "Go figure," but that would read like an invitation to draft a county-by-county analysis memo for every swing state. Please don't. Besides, it's winner-take-all in every one of these states, meaning a razor-thin victory is as good as a blow-out.

3. The general election should be close and competitive, but gladden your heart. There are multiple ways to build a coalition to defeat McCain. The recent SurveyUSA results from 50 statewide polls provide scenarios where either Clinton or Obama reach the magical 270 threshold. We could argue about whether Hillary would really lose blue-trending states like Oregon and Washington but somehow hold New Jersey and Pennsylvania, or whether Barack would lose the latter two, keep the former two, and mix in a couple of Southwestern states, but the point is the same: There are several ways to skin an Arizona senator.

4. The general election should be close and competitive, so be forewarned. There are also lots of Electoral College combinations where McCain could win. A reality to which both campaigns need to accommodate themselves is that November's winner, whether Democrat or Republican, absent remarkable circumstances, will get at most about 330 electoral votes. In 2000, an election that was a virtual popular vote tie nationally, 28 states were won by either Al Gore or George Bush by margins of 10 points or more. Fourteen of those states were won by 20 points or more. My point? Red states are very red, blue states very blue. That's why only about 20 states are considered true battlegrounds, and only three states (Iowa, New Hampshire and New Mexico) flipped custody between 2000 and 2004. Oh, and of these three, Hillary has won two, Barack one, but the net electors is about the same (IA = 7; NH + NM = 9).

5. Speaking of swing states, can we call a cease-fire on the whole "our candidate does better in swing states" meme? Please consult this handy chart put together by Craig Gilbert, the Washington bureau chief for the Milwaukee Journal-Sentinel. It shows that, in the 20 closest states from 2004, 15 of which have held Democratic National Committee-sanctioned primaries or caucuses thus far, Obama has won eight to Clinton's seven. If Florida and Michigan are counted, or even if Clinton holds them during a re-vote, it would be Clinton nine, Obama eight. And if Clinton wins do-overs in Florida and Michigan, and wins two of the remaining three (presumably Pennsylvania and West Virginia, with Oregon going to Obama), at best her "lead" would be 11-9 -- and even this "advantage" would have to be discounted because his margins in the states he won are generally larger than hers in her states.

6. But before we declare a cease-fire about the swing states, let me get in a few shots of my own. You keep tearing each other down, but you both have strong cases to make.

Limiting the discussion to the dozen states, containing 142 pivotal electors, decided in 2004 by 5 percent or less, the first thing one notices is that eight of the states are located in two regions: The Midwest (Iowa, Michigan, Minnesota, Ohio and Wisconsin) and the Southwest (Colorado, Nevada and New Mexico). The other four states are New Hampshire, Florida, Oregon and Pennsylvania.

Assuming for the sake of argument that Obama carries Oregon on May 20 as he did neighboring Washington, and that Clinton wins re-votes in Michigan and Florida and her current polling lead in Pennsylvania holds up on primary day, April 22, that might in theory give her an advantage in seven states to his five, and a whopping Electoral College vote difference of 99 electors to Obama's 43. Even if you give Obama Nevada and New Mexico, which she won but in which (according to SurveyUSA results) he seems more competitive against McCain, she still leads 89 to 53. On the other hand, if he wins a Michigan re-vote or, in lieu of a re-vote, pulls ahead of her in Michigan polls, the states split 6-to-6 and the electors are almost identical: Clinton 72, Obama 70.

Swing state competitiveness hinges to a certain degree on statewide demographics, and specifically whether one believes Obama's "wine track" coalition of African-Americans, men, high-earners, young voters and independents will be more likely to hold or flip the swing states than Clinton's "beer track" coalition of downscale whites, women, Hispanics, seniors and registered Democrats. The Clinton camp's ability to hold down traditional Democratic constituencies does bolster its claim that the party would have to worry less about keeping New Hampshire or Pennsylvania blue, but her lesser appeal to the "independents and some Republicans" Obama's campaign incessantly talks about means she might have trouble flipping some new states from red to blue. Obama's case is the inverse: More likely to open the map but, by virtue of doing so, adding a bit more risk of allowing some states to flip back from blue to red.

Both campaigns can point to a demographic -- she, Hispanics; he, young voters -- that should comprise a larger share of the national electorate this year compared to 2004. Each of your candidates also has a highly motivated block of identity voters (she, women; he, African-Americans), and while the even distribution of female voters across all states would seem to give Clinton a slight advantage, the four swing states with significant black populations -- Florida, Michigan, Ohio and Pennsylvania -- also happen to be the four biggest prizes among the 12 swing states.

You are, in other words, downplaying each other's considerable strengths. But you're also downplaying your own weaknesses.

7. Finally, paradoxes abound. Clinton consistently performs better with Latino voters, and yet the SurveyUSA results suggest Obama would be more competitive against McCain in Latino-infused Southwestern states. Conversely, despite being the darling of the upscale "wine track" voters, against McCain Obama seems vulnerable in New Jersey -- the state that battles Maryland annually for bragging rights to the highest median household income in America -- while Clinton is stronger.

In conclusion, both of your candidates are potentially electable against -- or beatable by -- John McCain. And if all of the above analysis makes your head hurt, well, now you know how the rest of us feel.