On hot-button issues -- the Israeli-Palestinian conflict or the Mac-PC divide -- we're quick to see bias in even the most objective news. 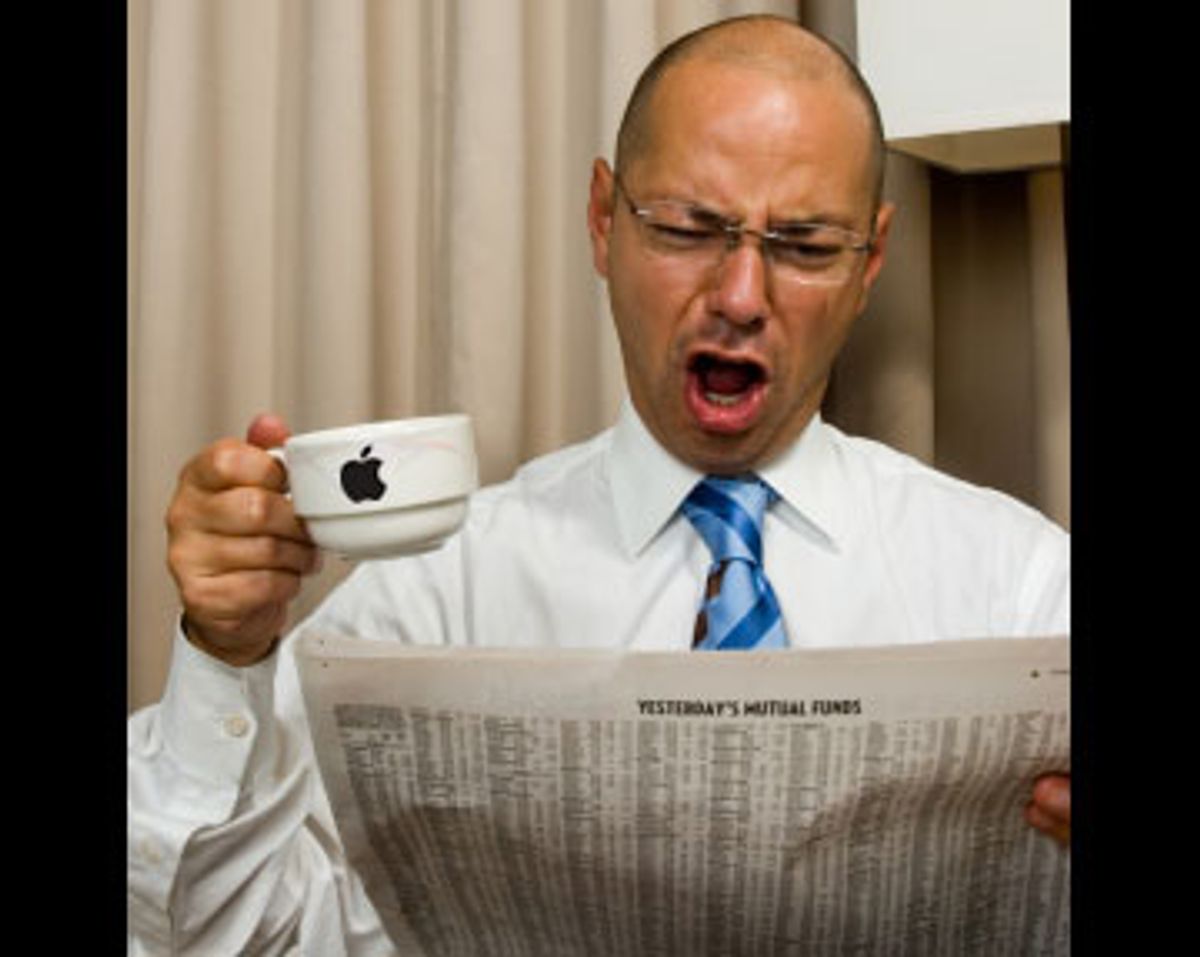 Note: Over the next few days in Machinist, I'll be running excerpts from my new book, "True Enough: Learning to Live in a Post-Fact Society." The book argues that new communications technologies are loosening the culture's grip on what people once called "objective reality." Here, I discuss one aspect of this trend, why people are quick to see bias in the news. In the fall of 2004, Walt Mossberg, the Wall Street Journal's influential tech columnist, reviewed Apple's latest desktop computer, the iMac G5. He absolutely loved the thing; you can tell from his first paragraph, which would not have been out of place at a beatification: "I am writing these words on the most elegant desktop computer I've ever used, a computer that is not only uncommonly beautiful but fast and powerful, virus-free and surprisingly affordable," he wrote.

Mossberg went on to say that the iMac "performed flawlessly and speedily," "was nearly silent," and that it "actually costs less than comparable Windows machines." He had only two tiny complaints. The computer lacked a built-in card reader to access pictures stored in digital cameras, and "Apple scrimped on memory," adding far fewer megabytes of the stuff than was common on Windows machines.

Mossberg's column ran for about 900 words; just 70 of them, or 8 percent, by my count, suggested anything even approaching negative criticism. Apple loved the review so much that it excerpted it in advertisements. Apple CEO Steve Jobs quoted it in his speeches. But Mossberg says that his mailbox told a different story. Several Apple fans felt slighted. What did he have against Apple? they wanted to know.

There are many tribes in the tech world: TiVo lovers, Blackberry addicts, Palm Treo fanatics, and people who exhibit unhealthy affection for their Roomba robotic vacuum cleaners. But there is no bigger tribe, and none more zealous, than fans of Apple, who are infamous for their sensitivity to slams, real or imagined, against the beloved company. "It's funny -- even if I write a generally positive piece about Apple, I still get more complaints from Apple partisans" than from opponents, Mossberg says. He has even coined a term for the effect. "I call it the Doctrine of Insufficient Adulation."

In my years as a tech reporter, I've dealt first-hand with Mossberg's doctrine -- as well as its opposite, the PC fans who see a pro-Apple press bias in my work (a few years ago, Salon's customer service department informed me that a reader called to cancel a subscription in response to my piece, "Hallelujah, the Mac Is Back.")

Last year, I praised the iPhone in something of the way Romeo once praised Juliet: The device, I said, is revolutionary -- "it marks a new way of life. One day we'll all have iPhones, or things that aim to do what this first one does, and your life will be better for it." But because I'd concluded that the phone was, at the time, too expensive to keep (this was before Apple cut the price), several readers alleged that I was an Apple hater. For instance: "Does Salon actually pay you or are you being paid under the table by rival companies?" David Pogue, the New York Times' tech critic, gets much the same response. In 2005, he wrote a quite positive review of Apple's iPod Nano. His only problem with the music player was that, per gigabyte of music-storage space, the Nano was more expensive than the iPod Mini it replaced. Also, at the time, it wasn't available in multiple colors. These small slights prompted Apple fans to ask Pogue, among other things, whether he was happy "licking Bill Gates' balls."

Why are Mac fans so quick to see bias everywhere? To understand the phenomenon, consider a study (PDF) that Robert Vallone, Lee Ross and Mark Lepper, psychologists at Stanford University, conducted in the aftermath of another issue that provokes many accusations of press bias, the Israeli-Palestinian conflict.

On the evening of Sept. 16, 1982, a militia associated with the Phalangists, a Lebanese Maronite Christian political party, entered the sprawling Palestinian refugee camps of Sabra and Shatila, in West Beirut, and set about killing hundreds of civilians. Proponents of the Palestinian cause quickly blamed Israel for what had happened; Israeli forces, which had been surrounding the camp, should have stopped the killings, they argued. Staunch supporters of Israel, meanwhile, absolved the country of any responsibility for what the Phalangists had done.

Shortly after the incident, Vallone, Ross and Lepper recruited 144 Stanford students from three different places on campus -- from the pro-Arab and pro-Israeli student associations, as well as from introductory psychology courses. The researchers showed the students six news segments covering the massacre; the clips were collected from national evening news programs, and were intended, in the way that network news is, to be mainstream, non-partisan depictions of the events in Lebanon. The participants were asked to rate the programs in several ways, all covering the same basic point: how fairly had the networks presented the case of Sabra and Shatila?

People who were neutral on the Israeli-Palestinian conflict -- presumably those from the psych classes -- came down somewhere in the middle. They didn't think the news clips supported either party in the conflict. But proponents of each side saw it differently.

Pro-Palestinian viewers said the news clips excused "Israel when they would have blamed some other country"; that the news accounts didn't focus enough on Israel's role in the massacre; that the segments would prompt neutral observers to take Israel's side; and that the journalists who'd put together the stories were probably advocates of Israel. Israel's supporters, meanwhile, said the exact opposite.

On issues we're passionate about, we all tend to think our own views are essentially reasonable, Ross explains. Thus when a reporter, editor, news network, or pundit mentions the other side's arguments, it stings.

"If I see the world as all black and you see the world as all white and some person comes along and says it's partially black and partially white, we both are going to be unhappy," Ross says. "You think there are more facts and better facts on your side than on the other side. The very act of giving them equal weight seems like bias. Like inappropriate evenhandedness."

Over the years, many experiments -- a few more on how people watch news about the Middle East, and others involving abortion, genetically modified food, and the wisdom of medical research on animals -- have confirmed Vallone, Ross and Lepper's findings. Psychologists call this the "hostile media phenomenon," and it goes far in explaining how both Apple and PC folks can see the opposite bias in the same news story.

Tech columnists Mossberg and Pogue don't claim to be objective. They're critics, and they trade in that slipperiest of all media productions: personal opinion. At the same time, each is unfailingly ethical and intellectually honest. Their articles brim with justification. Neither will tell you that he simply hates the newest Sony digital camera -- he'll tell you that its battery drains faster than Niagara Falls, or that its manual reads like a translation from Japanese to French to English, or that every picture comes out sepia.

If you're non-partisan, this is all you could want from a tech reviewer, and Mossberg and Pogue's style likely accounts for their enormous popularity. But many fans of Apple often seem to want more. They care little for honest opinion. They want to pick up the paper and see in it a reflection of their own nearly religious zeal for the thing they love. They don't want a review. They want a hagiography.

Many Americans aren't really very different. In polls (PDF), people claim not to be interested in getting "news from sources that share your point of view," and prefer instead "sources that don't have a particular point of view."

But for people who feel strongly about an issue -- for Apple fanatics, for abortion partisans, for folks who think they know the truth about global warming or what's going on in the Middle East -- personal views feel distinct and luminous. Journalistic "objectivity" inevitably produces a muddier picture.

When they come upon that difference -- the gulf between what's in their heads and what's on the page -- the audience tends to assume the worst: The reporter must be licking someone's balls.