"Today, I weep for my country"

The speech given by Sen. Robert Byrd on the Senate floor on March 19, 2003, just prior to the U.S. invasion of Iraq -- and John McCain's response. 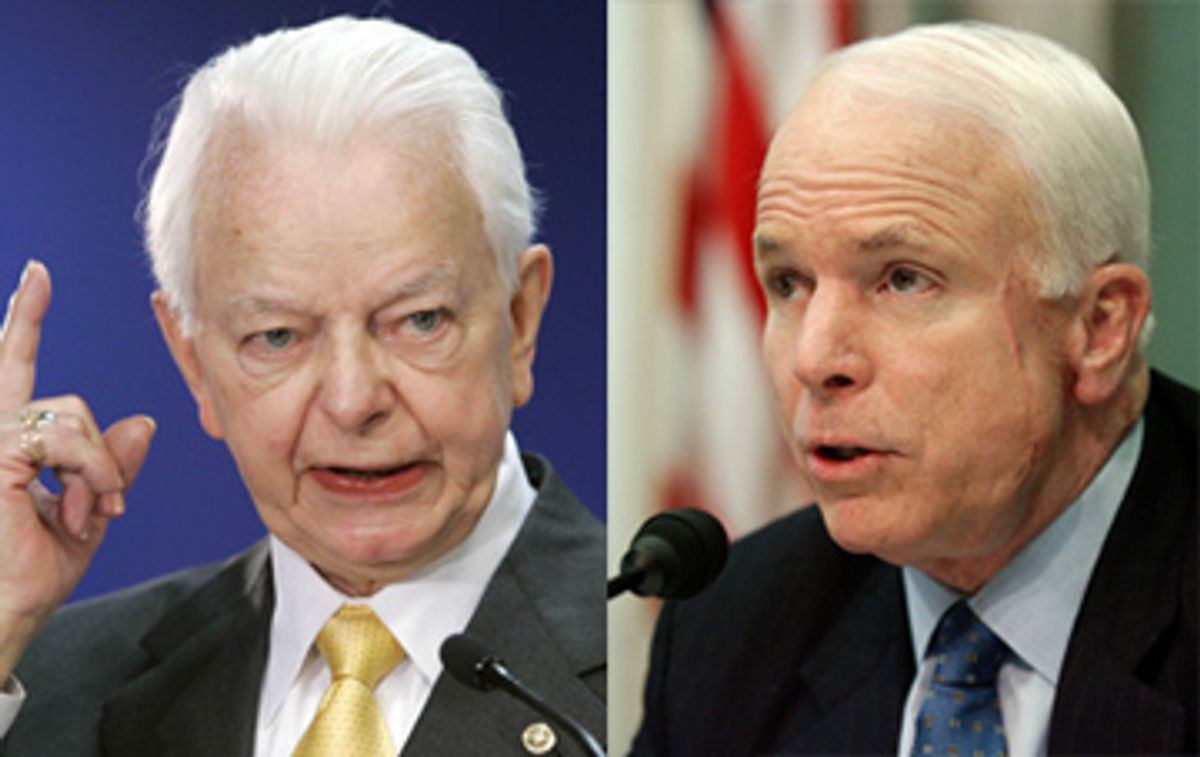 Byrd: I believe in this beautiful country. I have studied its roots and gloried in the wisdom of its magnificent Constitution. I have marveled at the wisdom of its founders and framers. Generation after generation of Americans has understood the lofty ideals that underlie our great Republic. I have been inspired by the story of their sacrifice and their strength.

But, today I weep for my country. I have watched the events of recent months with a heavy, heavy heart. No more is the image of America one of strong, yet benevolent peacekeeper. The image of America has changed. Around the globe, our friends mistrust us, our word is disputed, our intentions are questioned.

Instead of reasoning with those with whom we disagree, we demand obedience or threaten recrimination. Instead of isolating Saddam Hussein, we seem to have isolated ourselves. We proclaim a new doctrine of preemption which is understood by few and feared by many. We say that the United States has the right to turn its firepower on any corner of the globe which might be suspect in the war on terrorism. We assert that right without the sanction of any international body. As a result, the world has become a much more dangerous place.

We flaunt our superpower status with arrogance. We treat U.N. Security Council members like ingrates who offend our princely dignity by lifting their heads from the carpet. Valuable alliances are split. After war has ended, the United States will have to rebuild much more than the country of Iraq. We will have to rebuild America's image around the globe.

The case this Administration tries to make to justify its fixation with war is tainted by charges of falsified documents and circumstantial evidence. We cannot convince the world of the necessity of this war for one simple reason. This is a war of choice.

There is no credible information to connect Saddam Hussein to 9/11. The twin towers fell because a world-wide terrorist group, al-Qaida, with cells in over 60 nations, struck at our wealth and our influence by turning our own planes into missiles, one of which would likely have slammed into the dome of this beautiful Capitol except for the brave sacrifice of the passengers on board.

The brutality seen on September 11th and in other terrorist attacks we have witnessed around the globe are the violent and desperate efforts by extremists to stop the daily encroachment of western values upon their cultures. That is what we fight. It is a force not confined to borders. It is a shadowy entity with many faces, many names, and many addresses.

But, this Administration has directed all of the anger, fear, and grief which emerged from the ashes of the twin towers and the twisted metal of the Pentagon towards a tangible villain, one we can see and hate and attack. And villain he is. But, he is the wrong villain. And this is the wrong war. If we attack Saddam Hussein, we will probably drive him from power. But, the zeal of our friends to assist our global war on terrorism may have already taken flight.

The general unease surrounding this war is not just due to "orange alert." There is a pervasive sense of rush and risk and too many questions unanswered. How long will we be in Iraq? What will be the cost? What is the ultimate mission? How great is the danger at home? A pall has fallen over the Senate Chamber. We avoid our solemn duty to debate the one topic on the minds of all Americans, even while scores of thousands of our sons and daughters faithfully do their duty in Iraq.

What is happening to this country? When did we become a nation which ignores and berates our friends? When did we decide to risk undermining international order by adopting a radical and doctrinaire approach to using our awesome military might? How can we abandon diplomatic efforts when the turmoil in the world cries out for diplomacy?

Why can this President not seem to see that America's true power lies not in its will to intimidate, but in its ability to inspire?

War appears inevitable. But, I continue to hope that the cloud will lift. Perhaps Saddam will yet turn tail and run. Perhaps reason will somehow still prevail. I along with millions of Americans will pray for the safety of our troops, for the innocent civilians in Iraq, and for the security of our homeland. May God continue to bless the United States of America in the troubled days ahead, and may we somehow recapture the vision which for the present eludes us.

McCain: Madam President, I observed the comments of the distinguished Senator from West Virginia concerning the events which are about to transpire within the next hour or so, or days. I did not really look forward to coming to the floor and debating the issue. It has been debated. It has been discussed in the media. It has been discussed at every kitchen table in America. But I felt it would be important for me to respond to allegations concerning the United States of America, its status in the world, and, in particular, what happens after this conflict is over, which I do not think we have paid enough attention to, perhaps understandably, because our first and foremost consideration is the welfare of the young men and women we are sending in harm's way. But to allege that somehow the United States of America has demeaned itself or tarnished its reputation by being involved in liberating the people of Iraq, to me, simply is neither factual nor fair.

The United States of America has involved itself in the effort to disarm Saddam Hussein, and now freedom for the Iraqi people, with the same principles that motivated the United States of America in most of the conflicts we have been involved in, most recently Kosovo and Bosnia, and in which, in both of those cases, the United States national security was not at risk, but what was at risk was our advocacy and willingness to serve and sacrifice on behalf of people who are the victims of oppression and genocide.

We did not go into Bosnia because Mr. Milosevic had weapons of mass destruction. We did not go into Kosovo because ethnic Albanians or others were somehow a threat to the security of the United States. We entered into those conflicts because we could not stand by and watch innocent men, women, and children being slaughtered, raped, and "ethnically cleansed.'' We found a new phrase for our lexicon: "ethnic cleansing.'' Ethnic cleansing is a phrase which has incredible implications.

The mission our military is about to embark on is fraught with danger, and it means the loss of brave young American lives. But I also believe it offers the opportunity for a new day for the Iraqi people.

Madam President, there is one thing I am sure of, that we will find the Iraqi people have been the victims of an incredible level of brutalization, terror, murder, and every other kind of disgraceful and distasteful oppression on the part of Saddam Hussein's regime. And contrary to the assertion of the Senator from West Virginia, when the people of Iraq are liberated, we will again have written another chapter in the glorious history of the United States of America, that we will fight for the freedom of other citizens of the world, and we again assert the most glorious phrase, in my view, ever written in the English language; and that is: We hold these truths to be self-evident, that all men are created equal and endowed by their Creator with certain inalienable rights, and among these are life, liberty, and the pursuit of happiness.

It is not an easy decision to send America's young men and women into harm's way. As I said before, some of them will not be returning. But to somehow assert, as some do, that the people of Iraq and the Middle East are not entitled to those same God-given rights that Americans and people all over the country are, that they do not have those same hopes and dreams and aspirations our own citizens do, to me, is a degree of condescension. I might even use stronger language than that to describe it.

So I respectfully disagree with the remarks of the Senator from West Virginia. I believe the President of the United States has done everything necessary and has exercised every option short of war, which has led us to the point we are today.

I believe that, obviously, we will remove a threat to America's national security because we will find there are still massive amounts of weapons of mass destruction in Iraq .

Although Theodore Roosevelt is my hero and role model, I also, in many ways, am Wilsonian in the respect that America, this great nation of ours, will again contribute to the freedom and liberty of an oppressed people who otherwise never might enjoy those freedoms.

So perhaps the Senator from West Virginia is right. I do not think so. Events will prove one of us correct in the next few days. But I rely on history as my guide to the future, and history shows us, unequivocally, that this nation has stood for freedom and democracy, even at the risk and loss of American lives, so that all might enjoy the same privileges or have the opportunity to someday enjoy the same privileges as we do in this noble experiment called the United States of America.