Americans' first source in news is overrun by marketing videos. 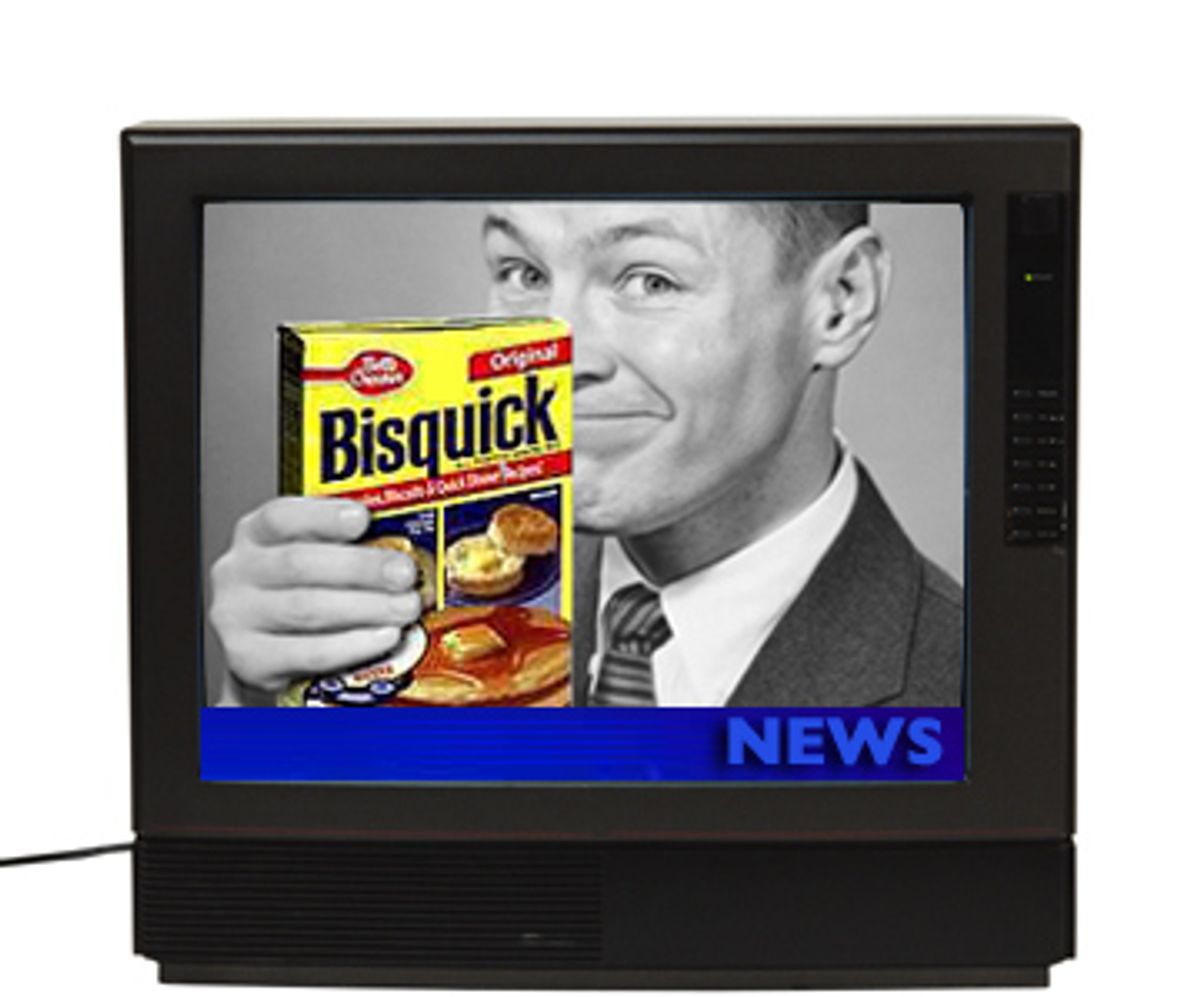 Note: Here is another excerpt from my new book, "True Enough: Learning to Live in a Post-Fact Society." (For previous excerpts, see here and here.) The book argues that new communications technologies are loosening the culture's grip on what people once called "objective reality." Here, I look at how fakery has overrun local TV news.

Late in the holiday shopping season of 2005, Robin Raskin began to worry about a hidden danger posed by the world's most popular gadget: Pornography was popping up on the iPod. Raskin, a pert middle-aged woman with short brown hair and a deep, authoritative voice, considered herself an expert on how kids use technology (she'd once written a magazine column called "Internet Mom"). She approached local TV news broadcasts across the country with her iPod worries. They bit. "There's scores of 'iPorn' everywhere," Raskin warned in an appearance on KGUN, an ABC affiliate in Tucson, Ariz. The iPod had become "a pedophile's playground," she said, and Apple was doing little to stem the smut. On Pittsburgh's Fox affiliate, WPGH Channel 53, Raskin called the iPod one of the "scariest" gifts of the season. The ABC station in Columbus, Ohio, featured Raskin's warnings as part of a report by Kent Justice, a correspondent who produces a regular segment called "On Your Side." Justice told viewers, "If you didn't know it, now prepare for it: Hundreds of Web sites are selling iPorn."

But something here was amiss. In addition to panning the iPod, Raskin used her time on TV to push "safer" holiday tech gifts, including products made by Panasonic, Namco and Techno Source. These weren't unbiased reviews. The local stations that featured Raskin were fully aware that the three companies had hired her to pimp their products during news appearances.

I learned of Raskin's ulterior motives from the Center for Media and Democracy, a group based in Madison, Wis., that monitors the public relations industry. Over several years, CMD has investigated an insidious public relations practice that's neither especially new nor uncommon, but is still relatively unknown beyond the cloistered world of television news production. In the trade, they're called VNRs, or video news releases.

A VNR is a short clip of marketing propaganda produced in the language and style of real news. P.R. firms send news stations thousands of such videos every year, the most sophisticated of which are virtually indistinguishable from honest news, featuring interviews with (paid) experts and voice-overs by (fake) reporters who subtly pitch products during their narratives. Surprisingly often, news channels broadcast these videos as real news; many times, CMD has found, the only edits that a station will make to a paid clip is to cut off the disclosure noting that the video was sponsored by a corporation.

VNRs first gained notoriety early in 2005, when the New York Times reported that many local stations aired prepackaged segments produced by federal agencies under the Bush administration. The VNRs cheered the war in Iraq, the Bush Medicare plan and various small-time programs. But Diane Farsetta, a researcher at CMD, says that private VNRs far outnumber federal videos -- and once you start looking for them, they seem to pop up everywhere.

On CMD's Web site, you can watch dozens of local news segments lifted directly from VNRs. The effect would be comical -- four stations ran a piece on how to incorporate Bisquick into your plans for National Pancake Week, to take one example -- if the lying weren't so determined. A segment may appear to be an in-depth look at the travails of travelers during cold and flu season, but all its experts refer to Zicam nasal spray as a preferred treatment. A consumer-safety piece warns viewers about scam artists who dress up flood-damaged cars and sell them as if they're perfect -- an announcement drenched in irony, considering that the news segment is actually a dressed-up ad for CarFax.com. A Halloween report delves into the origins of the jack-o'-lantern, but the reporter -- who's not actually a reporter but a P.R. man -- ends the story by suggesting holiday recipes from Betty Crocker. All of these pieces made it to news broadcasts near you.

Marketers began creating VNRs in the 1980s, but the practice had a slow start. Producing attractive video was expensive, and VNRs rarely looked slick enough to fit in with a broadcast program. Distribution was also a problem: P.R. firms sent out VNRs by mail on videotape, a system too clumsy for fast-paced newsrooms to work with.

The digital revolution, of course, has changed all that; marketers can now produce and distribute video that looks just as good as anything a TV station can make, and for almost no money.

At the same time, technology has upended how television stations produce news. In many American newsrooms, now, you'll now find computer terminals belonging to a system called Pathfire, which hooks stations into a cloud of video coming in from all over the world -- clips from syndicates such as the Associated Press, from other local stations and from the large broadcast networks.

For producers, Pathfire is a palette from which to create full stories at extremely low cost. Now images of overseas wars, out-of-state disasters, nearby sports victories, freakish weather events, adorable zoo animals and gripping celebrity goings-on are quickly pulled down and cut up into digestible bits of news, with the producer never having to leave the studio. Stations increasingly lean on this third-party footage to pad their broadcasts. According to one study, more than a quarter of the video you see on a typical local newscast isn't at all local, and was collected, instead, from video coming in on the cloud.

But when a producer logs into a system like Pathfire looking for footage for the 11 o'clock broadcast, she doesn't only see videos from legitimate outfits. Such systems also include a smorgasbord of VNRs, which marketers upload into the database daily. P.R. companies don't pay television channels to run the sponsored segments -- that would run afoul of the Federal Communications Commission's "payola" rules -- but the footage is free. For the stations, the offer is sometimes too attractive to refuse.

Although it's subject to tremendous (and, evidently, often justified) ridicule, local TV news has long been -- and remains -- America's first choice for information. Directors of local news stations are uneasy about disclosures that newscasts have routinely aired VNRs; many refused to comment when I asked them about their broadcasts.

The Radio and Television News Directors Association sharply criticized CMD's study, claiming that the findings did not represent typical practices at stations (the group did not respond to my inquiries). Farsetta points out that in surveys, more than 90 percent of news directors have admitted using VNRs -- or parts of VNRs -- in their broadcasts.

Late last year, the FCC began cracking down on the practice, levying fines against Comcast, which owns CN8, a Philadelphia station that has aired VNRs. But CMD, which continues to monitor stations, found that the practice continues.

Robin Raskin, the iPorn-wary tech journalist, told me that between 2002 and 2006, she appeared in almost three dozen TV marketing opportunities -- roughly eight a year, each of which was sponsored by three to five companies and was built around a holiday or news event. Raskin, who no longer does marketing work, says she regrets her decision to promote products on TV. She did it only to make some extra money during a low period in her life, and she says she didn't fully consider how the job would affect her journalistic credibility.

But Raskin adds another line, partly in defense of her actions: Public life is already so commercialized, so suffused with salesmanship, that it seemed nearly naive to recuse herself on mere ethical grounds. Fakery abounds. What's one more on the pile?

"I actually joked with my own colleagues that, 'Hey, I'm off to go do Whore TV," she says. "I was fully aware that that's what it was. And yet it's such a commonplace thing. I mean, there are people hawking drugs, guns, war. The worst that could happen to someone watching my segment is that you might buy a game you don't like."