The funny thing about black men in dresses

Why do black comedians like Tyler Perry, Eddie Murphy and Martin Lawrence don plus-size pantyhose and parade around as their feisty grandmas? 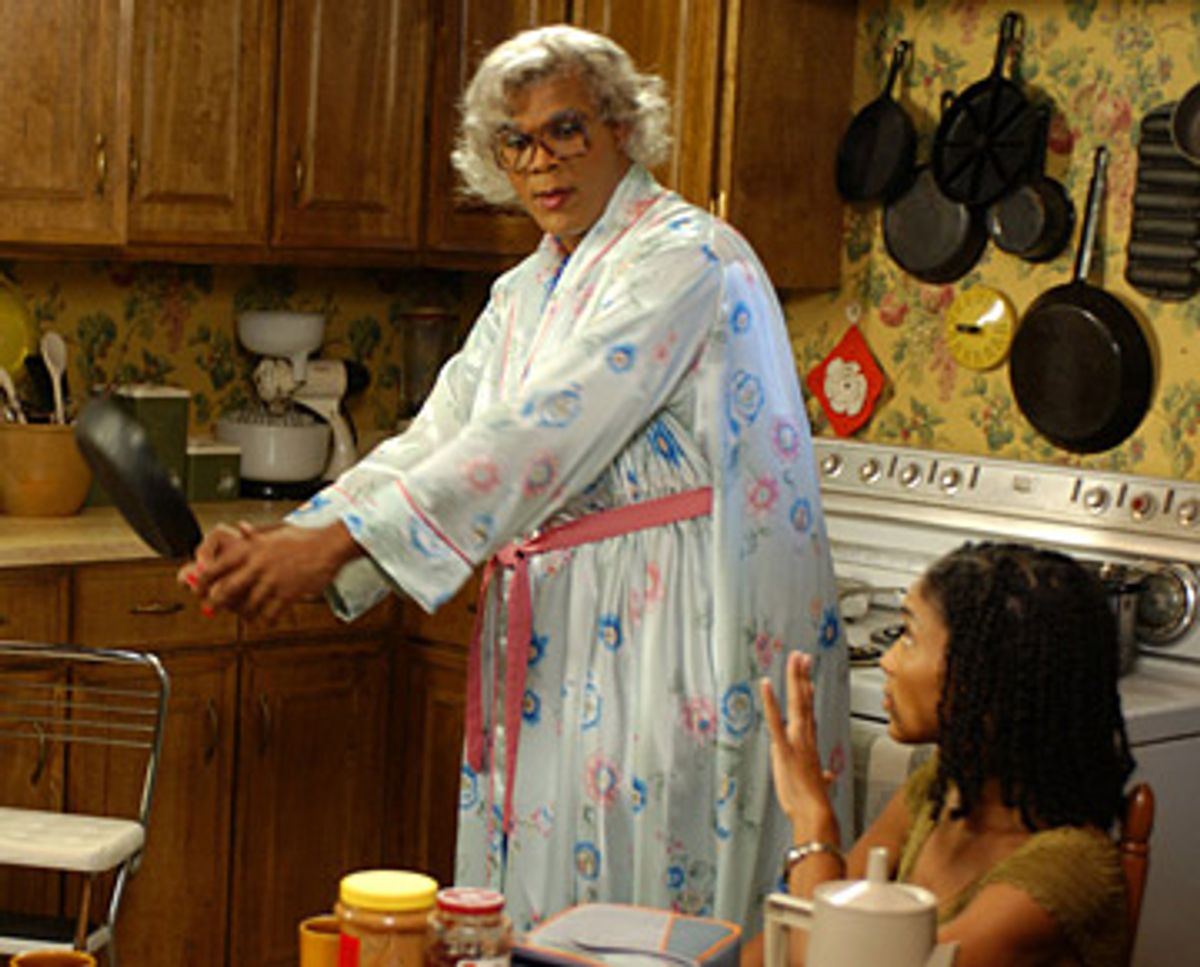 Some of the most memorable women in black entertainment have been played by men. This drag tradition with roots in minstrelsy harks back to '70s TV star Flip Wilson's sassy Geraldine character, and most recently has hoisted chitlin auteur Tyler Perry's Mabel Simmons, aka Madea, to superstardom. The sharp-tongued matriarch that Perry has portrayed in six hugely popular movies and a long-running TV show makes a cameo appearance in his new film, "Meet the Browns."

Madea, the seemingly inimitable Aretha Franklin of faux femmes, has yet to inspire knockoffs, but similar drag acts continue to pop up -- the corpulent Rasputia of Eddie Murphy's "Norbit," Keenan Thompson's Virginiaca on "Saturday Night Live," and Martin Lawrence's repeat performance as Big Momma in "Big Momma's House 2," among others. By now, Hollywood drugstores may be running low on plus-size pantyhose.

Perry's core audience began with middle-aged black women, introduced to Madea by the outrageous traveling theatrical shows that made her name. These faithful admirers, and the millions who have caught on since, still can't get enough of the character, but others don't like it hot. Some prominent black men in the entertainment business contend that there's nothing funny about a manly grandma: They say the surefire laugh-garnering power of slipping a macho Negro into chiffon doesn't represent anything but an effeminizing, racist spectacle.

Last year director John Singleton griped to Black Star News, "I'm tired of all these black men in dresses ... How come nobody's protesting that?" And comedian Dave Chappelle told Oprah Winfrey that during a shoot with Lawrence, the writers and producers had twisted his arm to do drag. "'Every minute you waste costs this much money,'" he recalls them telling him. "The pressure comes in ... I don't need no dress to be funny," he said. Chappelle also suggested that their insistence amounted to a "conspiracy," and he got applause for implying a connection between cross-dressing and "Brokeback Mountain," a film in which neither main character -- both of whom are arguably bisexual -- wears anything but hyper-masculine attire.

Chappelle's comment both presumes that impersonating a woman will emasculate him, and that emasculation is equivalent to homosexuality (or at least gay sex, judging by his poorly chosen example). Despite Chappelle's insinuation, it's debatable whether this phenomenon has much to do with a gay sensibility. Perry has denied the abundant rumors about his sexuality, telling Essence magazine that having to fend off the speculation has "given [him] a firm seating in [his] manhood." The newest breed of bruthas in drag has only the most tenuous connection to the decidedly queer cross-dressing entertainment craze of the '90s, exemplified by Wigstock, "Priscilla, Queen of the Desert," and "To Wong Foo" -- the main difference being the emphasis on frumpiness.

When straight black comedians do drag, they aren't trying to make women look fabulous. They reach for the floral housecoats and the chartreuse polyester pantsuits. It's anyone's guess why the no-nonsense old ladies hold more appeal for them -- perhaps grandmotherly aggression and take-no-prisoners masculine attitude have more in common than meets the eye. The clumsy fashion sense is certainly a match.

Like Chappelle, blogger Darryl James sees the phenomenon as part of an effort to neutralize black masculinity. For him and a lot of other straight black men, gender-bending comedians are "castrated clowns," whose emasculation makes them palatable to white people and man-hating black women alike. "The black man in drag is one of the new coons," he writes. Never mind that he's also one of the old coons -- according to Marjorie Garber's 1999 book, "Vested Interests," the men who played women in minstrel shows were "the best-paid performers in the minstrel company."

If the humor in minstrelsy arises in part from the reversal of class aspirations, then white men adopting the comic appearance of black women represents the ultimate topsy-turvy world. We consider upward mobility natural (even if we frown on strategies for advancement that include, say, passing for white), but downward mobility is crazy. And so a black man who plays the role of a black woman is also taking part in the ridicule of people who in some respects lie further down the social pecking order, in terms of gender if not economic power, mimicking discrimination by whites against people of color.

Minstrelsy has long been considered one of the most insulting forms of oppression, the classic addition of insult to injury. But it continues to occupy a strange position in American entertainment history: Though it originated with white performers, black performers eventually cornered the market on blackface after emancipation. By the beginning of the 20th century, the industry had morphed into a steady employer of unmasked black vaudevillians and set black performers on the road to mainstream acceptance. Like the blues, its history demonstrates the ability of black American artists to transform shame and pain into lucrative and significant new forms.

While many Americans still find minstrelsy appalling, it somehow never goes out of style. Nearly every year, a controversy erupts at an American college when white students decide to dress as blacks for Halloween. Sometimes a comedian creates an character like Thompson's gluttonous, obtuse and ignorant Virginiaca, who tries to squeeze her teenage stepdaughter (played by Ellen Page, in a scary attempt to act 'hood) into baby clothes, convinced that they're hoochie attire.

What's more, an act like Thompson's, whose insult to black women is sanctioned by his blackness, may embolden white performers like Charles Knipp, who tours gay clubs in the South in both drag and blackface as the outrageous, mush-mouthed Shirley Q. Liquor. Talk about old school.

The worst type of black drag pays insufficient attention to the humanity of black women. Wilson, by contrast, redeemed his garishly clad soul-sister Geraldine by making sure she always came out on top, especially in opposition to the church and in subverting machismo -- she even turned the king of braggadocio, Muhammad Ali, into a shrinking violet. The devil may have made Geraldine buy that dress, but she chastened her minister husband by reminding him that the Evil One also kept him employed.

For his part, Perry one-ups Geraldine by adding a bevy of down-home aphorisms to his portrayal of Madea. He also bolsters the character's complexity in his movies with a cast that counters her irreverence with melodrama. Ella, Madea's black female sidekick played by Cassie Davis, also helps to legitimize the character's status as a black woman. Not only is the joke never on Madea, but her tendency to whip out a pistol or two when things get out of hand establishes her dominance over her home life. What makes Geraldine and Madea rise above caricature is that Wilson and Perry keep the audience on their side despite their characters' ridiculous behavior, always increasing their credibility as characters -- though not so much as women. Clearly, no one else can play Madea, but it's tantalizing to wonder how differently her role would read if Perry cast an actual black woman in it.

What Chappelle and Singleton may miss out on by refusing to pimp those pumps is the dangerous fun of performing outside the constraints of race and gender. The desire to inhabit the lives and bodies of others doesn't necessarily make you a racist any more than sporting a double-D cup makes a man love men. Often it is inspired by a sense of play, and sometimes it is meant to increase understanding. Actors and writers, especially novelists, frequently do it (with words) to serve progressive political ends -- solo performers Danny Hoch and Anna Deavere Smith frequently channel characters regardless of ethnicity or sex.

But play with volatile social norms like race and gender, to paraphrase dramatist Suzan-Lori Parks, and they play right back. Sometimes they beat you at your own game. Knipp, for example, claims he created Shirley Q. Liquor "in celebration of ... black women"; however, his tacky parody, in which he's made up like a mandrill and drunk as a skunk, doesn't bear out this claim. It would be hypocritical to say that white men shouldn't dress as black women if they feel it's their calling -- when black drag queen RuPaul achieved his dream of being a white lady, no one cried foul. But the most successful would-be cross-dresser can create a character without perpetuating a stereotype.

We're never going to get rid of minstrelsy in all its bizarre forms -- it's part of America's cultural DNA, and we'd lose a shocking and vital performance style by attempting to wipe it out simply because it makes us uncomfortable or angry. But as Perry and Madea have proven, we can certainly reinvent it and perhaps give ourselves a makeover in the process.

Related video: The success of the Tyler Perry brand