Almost everything Owen Wilson does in this superbad Judd Apatow-produced clunker is funny. 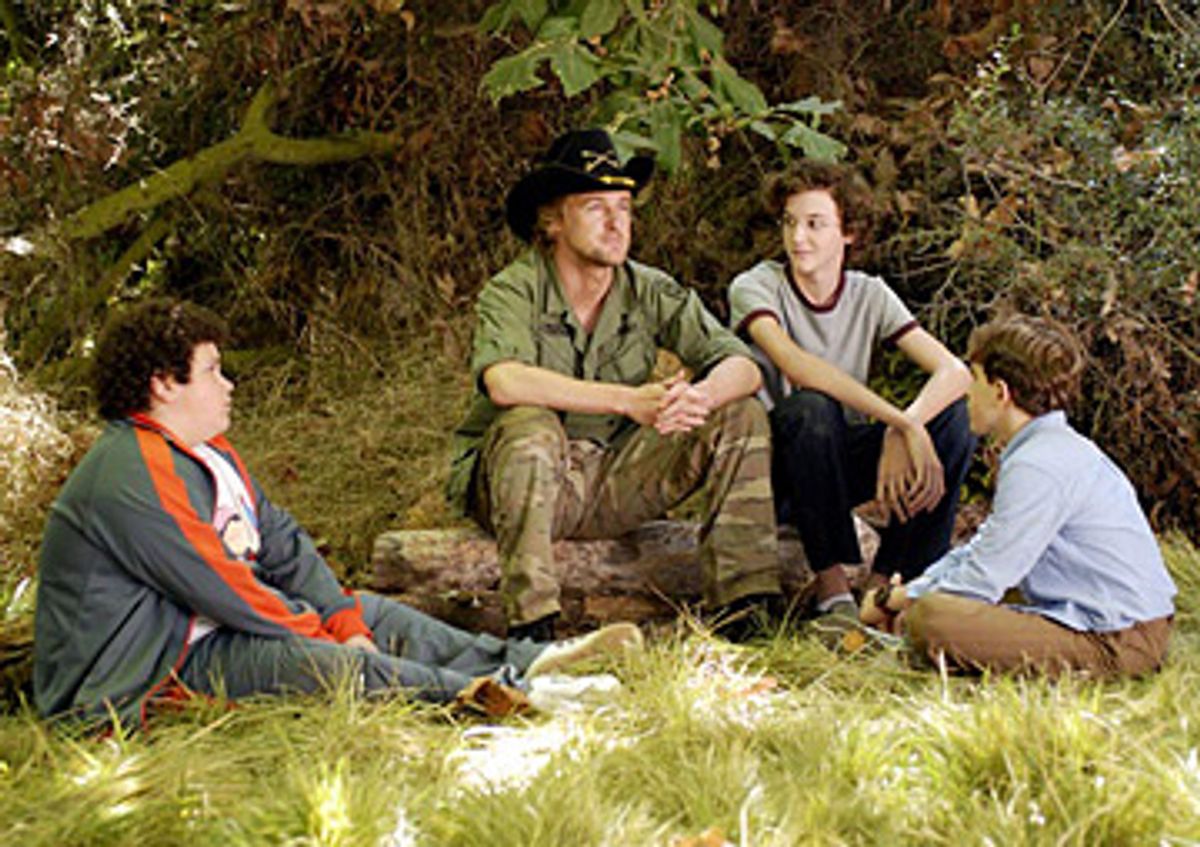 Owen Wilson doesn't have a single good line in the dismal "Drillbit Taylor." So how is it that almost everything he does is funny? As a homeless, hapless former Army Ranger (at least that's what he claims) who takes on the job of protecting three nerdy high school kids from a tireless bully, Wilson puts every pause in just the right place. He sends his lines -- even the stupidest ones -- floating out to us, instead of hurling them like a shot put. He tells the kids he was discharged for "unauthorized heroism" -- not funny at all, right? Yet I laughed. He describes a plot in which Rommel attached dynamite to puppies during World War I (yes, he has the wrong war): It was called, he explains with unshakeable authority, "Da hounden stormen."

Wilson gets by on his delivery and his demeanor. It doesn't matter what he says; it's how he says it -- which is a good thing when you're an actor stuck with writing like this. "Drillbit Taylor" was written by Kristofor Brown and Seth Rogen; Judd Apatow is one of the producers. But the success, and the pleasures, of "The 40-Year-Old Virgin," "Knocked Up" and "Superbad" notwithstanding, the names Apatow and Rogen shouldn't be treated as a seal of quality. Or even of tolerability: "Drillbit Taylor" is tired and misshapen; it feels not spontaneous but thrown together, a careless afterthought. (The director is Steven Brill, whose credits include the Adam Sandler comedies "Mr. Deeds" and "Little Nicky.") It's not the actors' fault the movie fails: The young performers playing the beleaguered high schoolers -- Nate Hartley, Troy Gentile and David Dorfman -- are, for the most part, appealing enough. They just seem lost in the picture, unsure of where to go or what to do. They're best in their scenes with Wilson, who frees them from their awkwardness. His unselfconsciousness rubs off on everyone around him -- except, unfortunately, the director.

Wilson is so gifted that perhaps no one thinks it's necessary to build a movie for him -- his job, apparently, is to carry everyone else. That's an unrealistic expectation for any comic actor. I may not be the biggest fan of Wes Anderson's "The Darjeeling Limited," but at least Anderson wrote a decent character for Wilson to play. And in pictures like "Wedding Crashers" and his twin movies with Jackie Chan, "Shanghai Noon" and "Shanghai Knights," Wilson's gifts were allowed to flower and flourish instead of merely being harnessed, as if he were a pack mule.

It's amazing that Wilson carries "Drillbit Taylor" even as ably as he does. Luckily, he has several scenes with another terrific comic actor, Leslie Mann. Drillbit has insinuated himself into the kids' high school, posing as a substitute teacher. In the teachers lounge, where he gives the appearance of fitting in just by carrying around a coffee cup, he meets and instantly falls for Lisa (Mann), an English teacher. The two hunker down on the faculty couch and make immediate plans for an assignation. Mann's eyes have a crazy sparkle (is she genuinely funny, or just possessed by the devil?), and her obsessive gleam is perfectly suited to Wilson's preternatural grooviness. Wilson delivers every line as if he were lazing around in a garden hammock. But there's nothing lazy about him at all. He's the hardest-working man in "Drillbit Taylor," maybe the only one who's doing any work at all. Whatever they're paying him, it isn't nearly enough.