The current spotlight on China's human rights record fails to illuminate its cruel and inhumane treatment of dogs and cats. 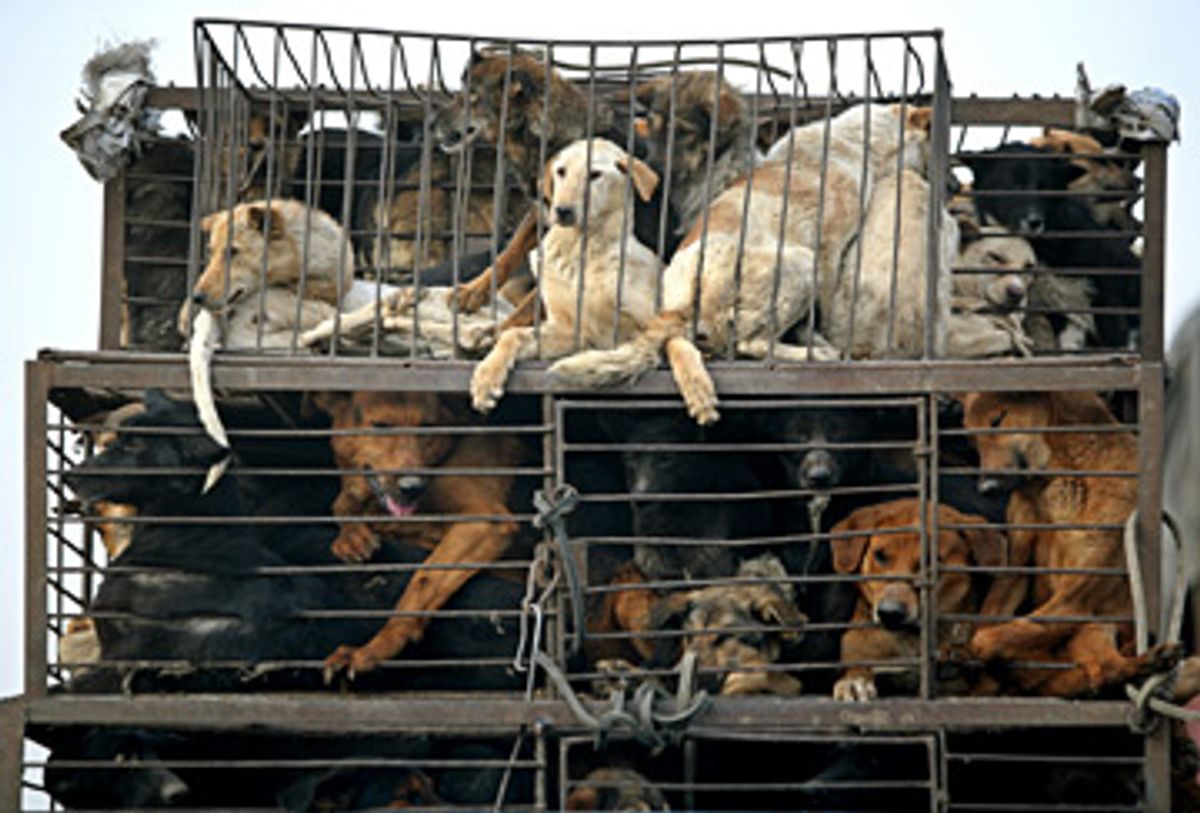 On my first trip to China I met a dog who was a dead ringer for Lassie. He lived with a dozen other dogs at a remote training camp for Olympic skiers in Manchuria, where a friend and I were spending a few days as we explored the area's backcountry skiing. In return for food and lodging we gave the Chinese athletes some clinics in American ski techniques.

The dog quickly became my friend. He would twirl happily in my arms before I headed up the slopes each morning and would be waiting for me when I returned. Dropping to my knees, I'd play tag with him, and he'd wag his tail so hard that his entire body would shimmy. The Chinese skiers paid no attention to the dogs.

On the day before we departed, at lunch, our translator stood and called the mess hall to silence. "To thank our American friends for showing us so much about skiing," he announced, "our chef will prepare a special dish tonight." He nodded to the head coach, who waved his hand toward the door. Two of the Chinese skiers, standing at the ready, opened it with a flourish, and the white-aproned chef stepped inside, holding aloft my friend, the collie, by his tail. He had been gutted from throat to groin.

Stunned, I couldn't say a word, but that evening when a large platter of dog meat was put in the center of our table, I regained my voice. My ski partner, a better cultural ambassador than I, gingerly took a few bits of the dish with her chopsticks. I declined. "Please thank the head coach," I told our translator, "but I can't. I have too many friends at home who are dogs."

I shall never forget the man's face. His mouth fell open and his eyes darted nervously from side to side. "Please translate what I said," I asked him, "just as I said it." When he did, the faces of the coaching staff took on the same astonished look. They stared at me in disbelief and something else -- pity.

It was my first encounter with some of the profound difficulties encountered in translation, not merely getting the words right, but also trying to bridge the gulfs that separate two cultures' long-held beliefs, everything from appropriate food, to the physical space between people when they talk, and -- often the most difficult to negotiate -- how we treat our fellow beings.

When it comes to dogs, the gulf between China's beliefs on how dogs should be treated and those of the liberal democracies remains wide. In fact, it's as wide as the ocean that separates China and the democracies on the issue of human rights. But whereas China has received ample feedback on its human rights record in the run-up to the Beijing Olympics -- abetting genocide in Sudan, imprisoning dissidents, and conducting an ongoing religious persecution of Tibetans, which has flared into violence once again -- very little has been aired about its treatment of dogs as well as cats: 2 million of them brutally killed each year for the international fur trade, according to undercover investigations done by the Humane Society of the United States.

Of course, one can say that some of these dogs and cats are being killed primarily for food, as was my friend the collie, their fur sold as a byproduct of Chinese culinary tastes, and so what's all the fuss? Asians eat dogs and cats; Americans and Europeans eat cows; and each of us can point a finger at someone else's gastronomic cruelty: the prisonlike conditions in American factory farms, the Japanese whaling, the French force-feeding of ducks and geese to produce foie gras.

What seems particularly dismaying, though, about China's treatment of domestic dogs and cats is that these mass killings are perpetrated against two species that share our hearth and home and with which humans have had a long, familial and affectionate relationship, albeit an ambivalent one. Around the world, people have loved dogs and cats but eaten them in hard times. China's record has been no different on this score. Pekingese and Shih Tzu were honored members of the royal court; Shar-Pei were bred for fighting; chow chow were routinely turned into food and clothing.

Today, this ambivalence remains entrenched in China, even though famine has been eradicated. Dog and cat can be found on restaurant menus throughout the nation. Yet, dietary mores are changing. The Chinese Companion Animals Protection Network, created in 2004, has launched a nationwide campaign to stop eating dogs and cats, making the point that many of these animals are pets, stolen from their families and shipped to slaughter.

Whatever the origins of these dogs and cats -- pets, strays, or animals bred specifically for food and fur -- their deaths seem astonishingly cruel when judged by the standards of modern abattoirs or North American animal shelters, which end the lives of 2 to 4 million dogs each year by gassing or lethal injection. It is this -- the mind-boggling and unnecessary suffering that these Chinese dogs and cats undergo -- that strikes me as deplorable, no matter what one's feelings about eating species that have been our longtime companions.

Undercover videos taken for Swiss Animal Protection, People for the Ethical Treatment of Animals, and the Humane Society show Chinese dogs and cats trucked to market without food and water, pulled from their cages, sometimes disemboweled, sometimes bashed on the ground to stun them, then hanged by wires, and skinned alive. These investigations led to a ban on the importation of dog and cat fur to the United States, Australia and a few countries in the Europe Union in the early 2000s. A full EU ban will take effect on Jan. 1, 2009.

These steps haven't ended the killing. A 2008 investigation by the Humane Society revealed that Chinese dog and cat fur continues to be exported to Russia, where it's turned into clothing and figurines. Since borders are porous, and only a DNA test can reveal the difference between the fur of domestic and wild species, the trade from China to Russia and on to other countries continues.

Set against the great human persecutions that China supports, the loss of these 2 million dogs and cats may seem insignificant. Nonetheless, each one of them is a life, full of consciousness and joy, as anyone who has lived with a dog or cat knows. Many of them are pets, mourned by Chinese families. It's one more shadow cast by the Olympic flame.

Ted Kerasote's recent book, Out There: In the Wild in a Wired Age, won the 2004 National Outdoor Book Award for literature.