Of condoms, Clinton, Obama and McCain

Sex education regressed into the Dark Ages under Bush. Which candidate will now stand up for young persons' health? 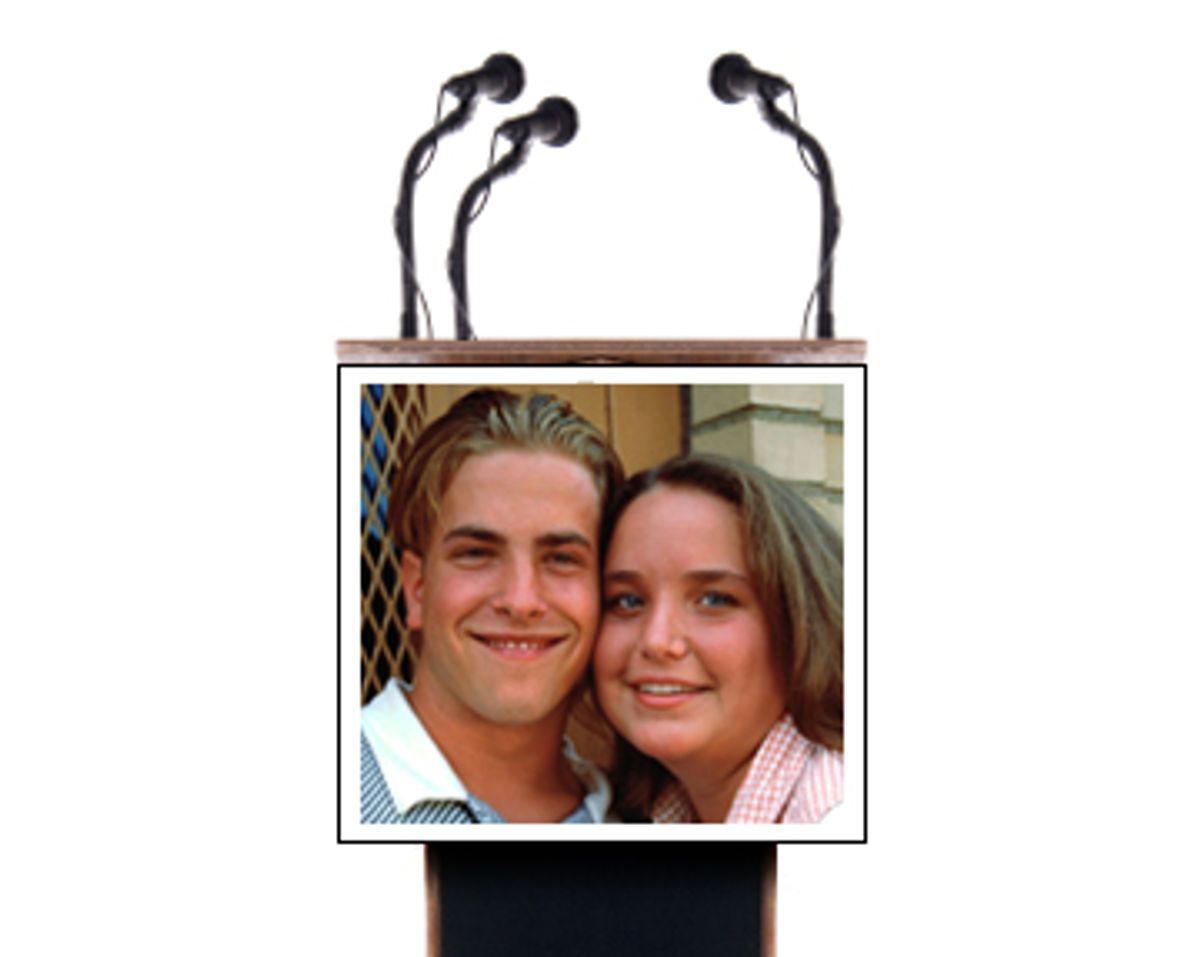 According to the Centers for Disease Control and Prevention, almost two-thirds of female adolescents have had sex by the time they reach their senior year of high school. As a pediatrician, doing my job well means I talk with teens about their sex lives. In many cases, an adolescent will reveal she's sexually active and probably has had one to three partners. That means I'm testing them for sexually transmitted diseases, performing pelvic exams to make sure they don't have signs that can lead to cervical cancer later, and discussing and prescribing contraception -- abstinence, condoms, Plan B and birth control pills.

This kind of comprehensive approach to teen sex has been successful. Teens have been waiting longer to have sex, and teen pregnancy rates dropped by almost 30 percent between 1990 and 2000. If they are sexually active, teenage girls have reported having fewer partners and are more likely to use some form of contraception than in the past.

So it's been perplexing and frustrating to see that over the past eight years, the tide has shifted so drastically against adolescents. Since 2000, teens have faced a rise in abstinence-only education, hurdles to obtaining Plan B emergency contraception and a hike in the price of birth control pills. In a campaign season notable for so much youth participation, it's worth exploring which of the presidential candidates is standing up for this important age group.

Shortly after President Bush took office, he began pushing abstinence-only sex education, where teens learn that the only way to prevent STDs and pregnancy is to wait to have sex until they're married. If or when abstinence proponents do mention contraceptives, they greatly exaggerate their failure rates to scare teens into believing they are useless. Funding for abstinence programs has grown to around $180 million annually.

While Bush has been signing checks, doctors have spent the better part of his terms reviewing the science behind his dogma. According to the Longitudinal Study of Adolescent Health, the nation's largest study of teen behavior, kids who took abstinence vows kept them for just a little over one year. Worse, pledgers who failed at abstinence were less likely to use contraception when they had sex. Further, the study shows that in the past six years, the prevalence of STDs has been similar between pledgers and nonpledgers.

It doesn't get any better as we look at access to emergency contraception. In 2002, Plan B's maker applied to the Food and Drug Administration for approval to sell it over the counter, something that just about every medical organization in the country supported, based on sound science. Several studies have demonstrated that girls who have access to Plan B use it properly and do not change their safe-sex practices; that is, they still use condoms or oral contraceptives.

So it was good news in 2003 when an FDA panel overwhelmingly approved the idea. But when the decision reached the agency's highest levels, the FDA balked, bowing to political pressure from congressional Republicans and religious groups. Thankfully, the Democratic minority in Congress fought back, and in the end got what it wanted -- sort of.

In late 2006, Plan B was approved to be sold over the counter, but with two caveats. First, Plan B was approved only for women over age 18. Minors still need a prescription. Second, "over the counter" meant over the pharmacists' counter. Today, reports persist of pharmacists refusing to provide the drugs to customers, usually on religious grounds. One instance, in Texas, occurred after a woman who had been raped came to a pharmacy with a prescription from her doctor.

Finally, as if politicos were going for a hat trick, there was last summer's revelation that the price of oral contraceptives was going up for college students. Traditionally, Big Pharma has given campuses a break on the price of birth control pills. But the 2005 Deficit Reduction Act put an end to that, as the government cut drug reimbursements to pharmacies. Suddenly, an $8 to $12 charge for a month's worth of birth control spiked to between $30 and $50. That priced out a whole lot of young women from protecting themselves.

While a dreamy religious conservative might argue that the spike will also price teenage girls out of having sex, think again. Most first-person reports tell us that women's sex lives haven't changed. Now, however, they're having riskier sex, relying only on condoms or depending on Plan B as birth control, taking it after each episode of intercourse, something it's not approved for.

There has been nearly a decade of disconnect between Washington and young women. If you have any doubts about the consequences, consider that the teen pregnancy rate recently rose for the first time in 15 years. That prompts the question: Who's going to stand up for teens over the next 10 years?

If your voting will be influenced by this issue, John McCain isn't your guy. His lack of interest and insight into the issue was best summed up during an interview last March, captured by the New York Times, on his Straight Talk Express bus:


Q: What about grants for sex education in the United States? Should they include instructions about using contraceptives? Or should it be Bush's policy, which is just abstinence?

McCain does support Bush's ideologically based policies. He has voted against legislation to ensure that sex education be scientifically accurate instead of just abstinence based, has voted to impose parental consent for teens seeking birth control, and has opposed legislation that birth control be covered by insurance. He has also voted against programs to increase awareness about emergency contraception.

Like many issues in this campaign, it's not easy to separate where Hillary Clinton and Barack Obama stand on sex education. Both have been solid supporters of reproductive rights, although Obama's time in the Senate doesn't give him as deep a congressional record as his rival. Perhaps his strongest stance was in cosponsoring legislation to reverse the birth control price hike last fall, but he hasn't pushed it forward. In 2007, he also introduced a bill to reduce teen pregnancy in minority communities. But it's a little odd, for someone who has attracted so much energy and support from young people, that Obama doesn't have any stance or position on his campaign Web site about any of these reproductive issues. The closest thing I could find was "Healthcare" under "Issues," where at the bottom he has a bullet point about women's health. But he makes no specific mention of reproductive issues.

On the other hand, his stances and statements in other places are quite clear. When members of his staff were interviewed about his positions on reproductive issues in 2007, they pointed out that he had a "100 percent rating from pro-choice groups," and that he was "an original co-sponsor of the Prevention First Act, which will ensure that all taxpayer-funded federal programs are medically accurate and include information about contraception." Finally, they noted that "in December 2006, Obama went to 'the political equivalent of the lion's den' when he told a conservative Christian audience in Southern California that abstinence-only education was not enough."

Clinton probably has the longest history of advocacy and action on behalf of young women. She led the fight against the FDA on Plan B by first by joining with other lawmakers to insist that the Government Accountability Office investigate the FDA's actions. Then, by blocking the confirmations of two consecutive FDA commissioners (first Lester Crawford and then Andrew Von Essenbach, who now heads the agency after he agreed to disregard right-wing ideologues and approved Plan B's going over the counter). Also, in 2005, she introduced legislation to require hospitals to dispense Plan B to rape victims. Unlike McCain, Clinton has favored and developed legislation to expand comprehensive sex education and to require insurers to cover birth control. In contrast to Obama, she has clearly posted her stances and record on reproductive healthcare on her campaign Web site. Finally it's worth noting that the National Organization for Women has endorsed her, in part because of her work on behalf of reproductive rights.

In the face of a war in Iraq and a staggering economy, sex education for teens may not loom large on voters' minds. But with so many young Americans deeply engaged in this election, they deserve to know the facts about where their candidates stand on an issue that affects them this personally. As a doctor and a parent, I want those issues upfront as well. The last thing I want to see is my time with teens restricted by views or laws that force me to bury my head in the sand. Restricting access to reproductive education and choices is not good for any young person's health.