Why I hope the president of Nigeria will make good on his plans to attend my show on oil politics. 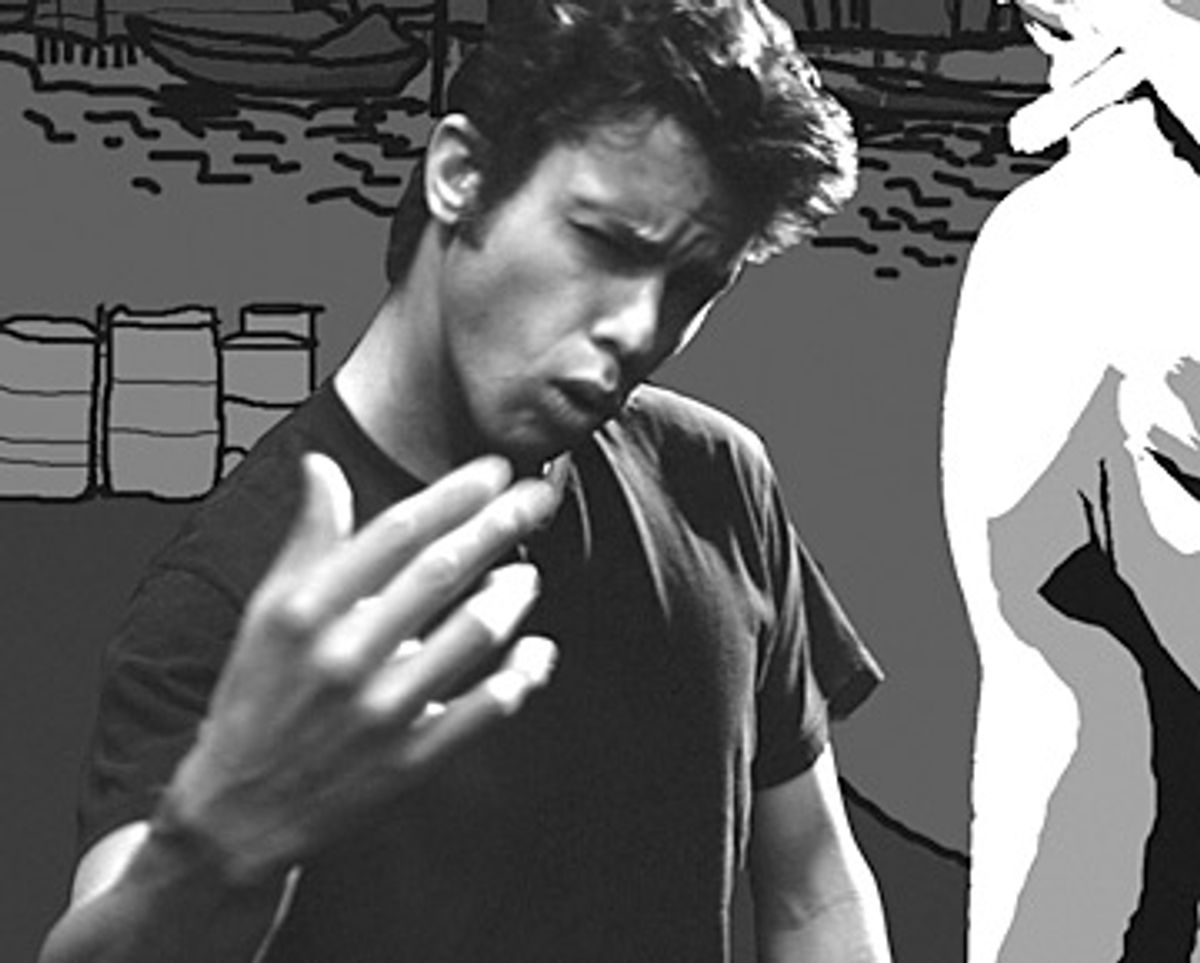 I performed my solo show "Tings Dey Happen," about oil politics in Nigeria, more than 200 times in 2007, more than 100 times each at the Marsh theater in San Francisco and at the off-Broadway Culture Project in New York. I found no cure for the insecurities that came with observing reactions to the show's politics -- were those "hmms" of deep thought from the audience after that last scene, or just jaded "hmpfs"? -- until one Saturday night last October in New York, when 60 Nigerians came to the show.

"Tings Dey Happen" is based on a year I spent in Nigeria as a Fulbright scholar in 2005 and 2006. I play more than a dozen Nigerian characters, including militants, ganja sellers and prostitutes, as well as a handful of Westerners, to tell the story of life on the volatile West African oil frontier. I knew when I set off for Nigeria in March 2005 that the show's subject matter would be relevant for the foreseeable future, but I couldn't have predicted how regularly it would become tied to front-page news. American oil consumption has become a political gusher, ever since President Bush acknowledged America's "addiction to oil." For the first time, we are in a presidential campaign in which no candidate can afford to ignore the dangers of global warming. The price of oil has hit record highs in March. And while the Iraq war and surrounding regional chaos remain daunting, Africa is increasingly at the heart of our oil problems, too. Nigeria alone now supplies 10 percent of America's imported oil, and sub-Saharan Africa provides as much of our imported oil (20 percent) as the Middle East.

While I built "Tings Dey Happen" for Western audiences, I strove to make the characters as authentic as possible, even letting a portion of one scene play out in pidgin English, Nigeria's lyrical lingua franca. In seeing a depiction of everyday people living in one perilous corner of the global oil economy, I hope audiences will abandon their political preconceptions and lose themselves in the drama of the Niger Delta.

For American theatergoers, the show is an immersion in a foreign reality. For Nigerians, it's a trip home. On that Saturday night in October with the big Nigerian contingent, the house rocked with the energy of a poetry slam. Many times I had to add long pauses as clapping and laughter throttled the theater. There was none of the more common quiet shifting, no cautious unwrapping of candies or questioning "hmms." I could launch into scenes with maximum gusto, confident my large Nigerian audience was tracking every cultural reference, phrase and mannerism. I wasn't even bothered when they took cellphone calls during the show.

All of which made the matinee the following Sunday completely baffling. A group of 10 Nigerians sat in the front row this time -- completely silent and serious. Stone-faced. That iced the rest of the crowd too. When Nigerians laugh and clap, it gives Americans in the audience permission to enjoy a white man's depiction of black Africa. But this group of Nigerians did the opposite. Why had my all-star audience betrayed me?

At curtain call, the Nigerian man who had kept the grimmest visage during the show clapped a few times and then called out, "You done try-o! Well done." To say someone "tried" is in fact a compliment in Nigeria -- to continue trying in a country of decimated infrastructure and massive corruption is viewed as a success. After what I'd experienced in Nigeria, I wanted to shout back: "But you, you never try at all!" Instead I smiled and said, "Thank you."

After the show, the group of Nigerians greeted me in the lobby. They all congratulated me heartily. Some of them had come for a second time. I shot back in pidgin, "Ah ah, wetin dey worry you? You no be Nigerian-o! To God, so serious!" (Translation: If you liked it, and you are Nigerian, you would have shown your appreciation. What happened?)

Well, they explained, the stone-faced man who was in the front row, he is the secretary to the president of Nigeria. And he very much liked the show. In fact, he would like to bring you to Nigeria to perform it there, they said, even do a "command performance." I repeated the phrase, "command performance," in an accent of Nigerian officialdom, giggling at the reminder of Nigeria's bureaucratic pageantry.

"Yes now," said a man in a black suit who had sat next to His Excellency, "but do you know what a 'command performance' is?"

I shook my head. My cultural knowledge had reached its limits.

"He'd like you to perform for the president of Nigeria, in his presidential villa."

A goal of mine in creating the show has always been to spark conversation and debate toward social and policy change. My audiences have included large groups of U.S. State Department officials, Chevron employees, anti-Chevron activists, United Nations members, Human Rights Watch directors and oil analysts from Deutsche Bank. But I had yet to perform for the group that has the most impact on the lives of Nigerians -- that nation's political class. Now I was being asked to perform my show for the biggest man of Nigeria, head of Africa's most populous country.

Over the next several months, a three-city Nigerian tour was planned, including a performance for the honorable president of the Federal Republic of Nigeria, Umaru Musa Yar'Adua. Deep into negotiations, a government staffer asked for a script or DVD of the performance that could be reviewed by senior government officials. My agent forwarded the script. We waited. In January, the news came: Because of heightened security in the oil-rich Niger Delta, and given the political sensitivity of the play's content, the tour would have to be suspended, indefinitely.

I won't lie; I felt some sense of relief about not returning to Nigeria after all. I'm still haunted by certain memories -- of my Nigerian friends' overwhelming expectations of marvelous presents, of malaria, of the incessant need to locate more bottled water. But I also dreamed of performing in the rugged villages where I had stayed, for the very people I play in the show. I dreamed of discussing Niger Delta politics with the president after performing at his villa, and asking him if there was anything he could do to rebuild the health clinics in the Ijaw village of Nembe Creek and the Itsekiri villages in the Escravos area.

Nembe Creek and Escravos are the two villages in the Niger Delta where I stayed several times, and their stories make up the bulk of "Tings Dey Happen." The people are bitter and underserved, as are most people of the Niger Delta. They are angry that the huge oil wealth that is taken daily from their area has not translated into a significant rise in living standards. And they have learned that appealing to their local, state and federal governments is futile. So they turn militant and threaten and attack oil company infrastructure and oil workers in hopes of getting hush money in the form of work contracts. In the past decade, the Niger Delta has become a violent swamp as well as a poor one.

Reversing the cycle of bitterness and violence in the Niger Delta is one of the great challenges facing Nigeria, and it will take at least a generation's rigor, intelligence and perseverance. I would be deeply honored if I could contribute to this effort by performing my play in Nigeria as a way of sparking a meaningful dialogue between the government and its citizens.

So, Your Excellency, what do you say? I brought the show to the movers and shakers of New York, and now back again to my home in San Francisco. But perhaps home for "Tings Dey Happen" is Nigeria. Perhaps you can send another envoy to San Francisco, and he can revive the negotiations? Your young presidency has signaled an openness to explore new solutions to the entrenched Niger Delta crisis, and perhaps my play could provide a fresh, albeit unusual, perspective. If you invite me back to perform for you and your fellow Nigerians, I promise I will give the performance of my life, even if you don't laugh once.