Not just cute girls with pom-poms 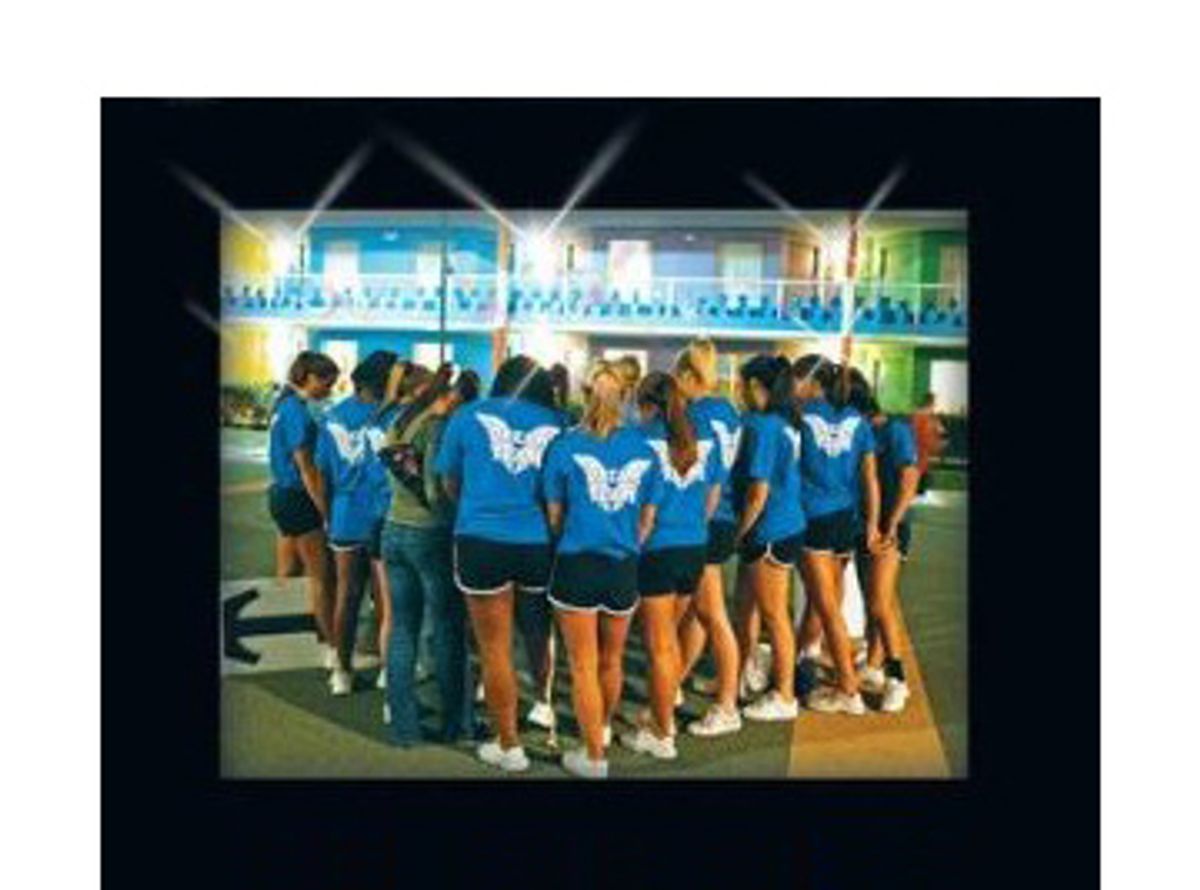 When you think "cheerleader," you probably think of cookies baked for the quarterback, lustrous hair flipped in the face of shivering nerds and sneering Goths, TV movies about that crazy mom in Texas: in short, everything but the actual leading of cheers. Surely you've heard that "cheerleading is a sport!" -- yeah, just like you've heard that "Miss America is a scholarship competition!"

In other words, you may not really believe cheerleading is a sport unless you watch a lot of ESPN2 -- or until you read "Cheer! Three Teams on a Quest for College Cheerleading's Ultimate Prize," by Kate Torgovnick, a former associate editor and writer at Jane magazine who cut pretty much all the mandatory pep rallies in high school. But while researching an article for Jane about cheerleader injuries, Torgovnick got sucked in. She discovered in competitive college cheerleading -- one of the only sports in which men and women compete together -- "a fervent subculture filled with people willing to take their bodies to the limit ... I was blown away by the gravity-defying women and Herculean men. The glimmer of passion in their eyes was so intense that it was sometimes startling," she writes. "These are not just pretty women shaking pom-poms."

Torgovnick spent a year tracking the travails of three teams in pursuit of national championship rings: the Southern University Jaguars (Baton Rouge, La.), described as "both teams in 'Bring It On' rolled into one"; the University of Memphis All-Girl Tigers, who surprisingly (or not?) struggle for the same respect as coed teams; and the Stephen F. Austin State University Lumberjacks (Nacogdoches, Texas), the team to beat ... until their longtime coach suddenly quits. A handful of salient characters carry the drama, my favorite perhaps being Casi Davis of the Tigers, who -- though all-female teams usually form a "base" in groups -- is strong enough to toss a teammate up onto her shoulders by herself.

The resulting narrative has, aptly, been described as the "Friday Night Lights" (the book, that is) of cheerleading. Unlike, say, "Pledged" (the "Friday Night Lights" of sororities?), it's more play-by-play than exposé. Eating disorders and 8-balls: Oh, they definitely come up. Steroids, too. But you'll learn just as much about basket tosses and double downs -- and about one or two arguable upsides to the designation of college-level cheerleading as "activity" rather than "sport."

Torgovnick bobbles a bit when she inserts herself into the proceedings ("I feel like an atom bomb has been dropped on me," she writes, implausibly, when she finds out the Lumberjacks coach has bailed). But get sucked into the book as she did the sport, and you might start to believe -- just a tiny bit -- that tag line from "Heroes": "Save the cheerleader, save the world." Salon talked to Torgovnick about America's love/hate relationship with cheerleaders in pop culture, the real people behind the varsity letters and the long road toward respect.

What surprised you the most about the world of competitive cheerleading?

I was most surprised by the people. As a non-cheerleader, I assumed that college cheerleaders would be cutesy, bubble-gum girls. But that's just not the case. On my first trip to Nationals, I interviewed a female cheerleader from Texas who actually played football in high school. She wanted to be one of the first women to play college football, but when she didn't get recruited, she decided to try cheerleading. Some other people who might surprise you: Matt, a little person [person with dwarfism] who is the star cheerleader on his team; Marly, who is a cheerleader and also a member of her school's ROTC program; and Casi, who dreams of opening up a tattoo parlor after graduation. This whole project has been a lesson in not stereotyping people.

Is cheerleading really as dangerous as all the headlines about injuries make it out to be?

Absolutely not. In any given year, six out of every thousand cheerleaders will end up in the emergency room for everything from injured fingers to more serious head, neck and back issues. It sounds high, but let me put that in context. In football, 42 out of every thousand football players will head to the emergency room each year. For hockey, it's eight out of a thousand. The difference is that in cheerleading, the people getting hurt are women. Young women. Usually fairly attractive young women. So I can't help but notice a hint of paternalism in the coverage of injuries in cheerleading.

That said, serious injuries in cheerleading do happen. A cheerleader went down three days ago during an NCAA Women's Tournament game and was just released from the hospital yesterday. In "Cheer!" one of the main characters is in the intensive care unit for an entire weekend after a fall during a basket toss. Most cheerleaders know, or know of, someone who has been seriously hurt doing some of the high-flying acrobatic moves that cheerleaders now perform. It's almost like a backdrop to the sport.

Why are we so obsessed with cheerleaders? Seriously, is it just because they're hot?

We're definitely a culture obsessed with youth and beauty -- so it makes sense that we're taken by cheerleaders. I do think there's more to it than that, though. For Americans, cheerleaders are one of the most recognizable high school stock characters, the ones who are synonymous with popularity. It's interesting to look at some of the cheerleaders you see in movies, on television, and in ads. They fall pretty distinctly into two camps -- the chaste, good girls who are worshipped from afar and then the slutty, snobby queen bees. As icons, cheerleaders really toe that virgin/whore dichotomy. They're a recognizable female symbol, so I think we as a culture project some very contradictory views about women onto them.

Tell us about male cheerleaders. What don't the cheerleader-clueless among us know? The outside perspective is that they're, you know, grinning chorus boys (or George W. Bush). But at schools where cheerleading is integral and respected, do the men get homophobic bullshit, or are they considered true athletes? (Perhaps even more so than the girls?)

First of all, most people don't know that in college cheerleading, 50 percent of cheerleaders are guys. The stereotype out there is that guy cheerleaders are either gay or very effeminate. But that's just not what I encountered for the most part. Here's what I did see about male cheerleaders. First of all, they are enormous -- the aesthetic is to have guys who weigh two to three times as much as their female stunt partners. These guys typically come from other sports -- football, wrestling, basketball, weight lifting -- and had some type of injury that took them out of their first sport or they didn't get the athletic scholarship they were hoping for. A huge percentage of the guys give the same explanation for how they first got interested in cheerleading: for a girl. Once they've gone to a few practices, they kind of get hooked. Overall, while there are definitely all kinds of guys who become cheerleaders, it's a surprisingly manly-man, beer-guzzling culture.

And yes, even at schools where cheerleading is huge, the guys definitely have to deal with the stereotype. One of the guys at Stephen F. Austin University told me that they often invite football players to parties or practices, so they can see firsthand what cheerleading is all about. And James, a captain at Southern University, says that every time he meets a girl and tells her that he's a cheerleader they always say, "Can I ask you a question?" He automatically knows what they are going to say.

When and how did cheerleading as a culture/pursuit shift from peppy pom-pom shaking to hardcore acrobatics?

It started to change in the early 1980s when the first cheerleading championship was held -- before then it wasn't necessarily a competitive activity. At the same time as cheerleading competitions were catching on, a lot of school gymnastics programs were being shut down because insurance costs were rising and it was getting harder to find well-trained coaches. So a lot of competitive gymnasts started funneling into cheerleading. With those things together, it's sort of snowballed into the high-flying, daredevil sports that Fox Sports and ESPN2 air now.

What's it going to take for cheerleading to really, finally be considered a true sport?

A lot of people make the argument that cheerleading isn't a sport because there's no ball and no way to objectively score it. But, and I'm going straight to the dictionary here, a sport is "an athletic activity requiring skill or physical prowess and often of a competitive nature." So I just don't get how cheerleading wouldn't count.

I think what it will take is more people becoming aware of the intense athleticism it takes to be a competitive cheerleader. And that's definitely starting to happen. A big issue here is that cheerleading has a split personality; while there is this intense, die-hard athletic side, there is still the cheering at games, the makeup, the big hair. I think at some point we may see a split off of these two types of cheerleading; the University of Maryland and the University of Oregon have already created separate teams -- one that focuses exclusively on competition and is a varsity sport, and a second spirit squad that cheers at games. There is also a small movement to get cheerleading into the Olympics. Hey, Ping-Pong is in, why not cheerleading?