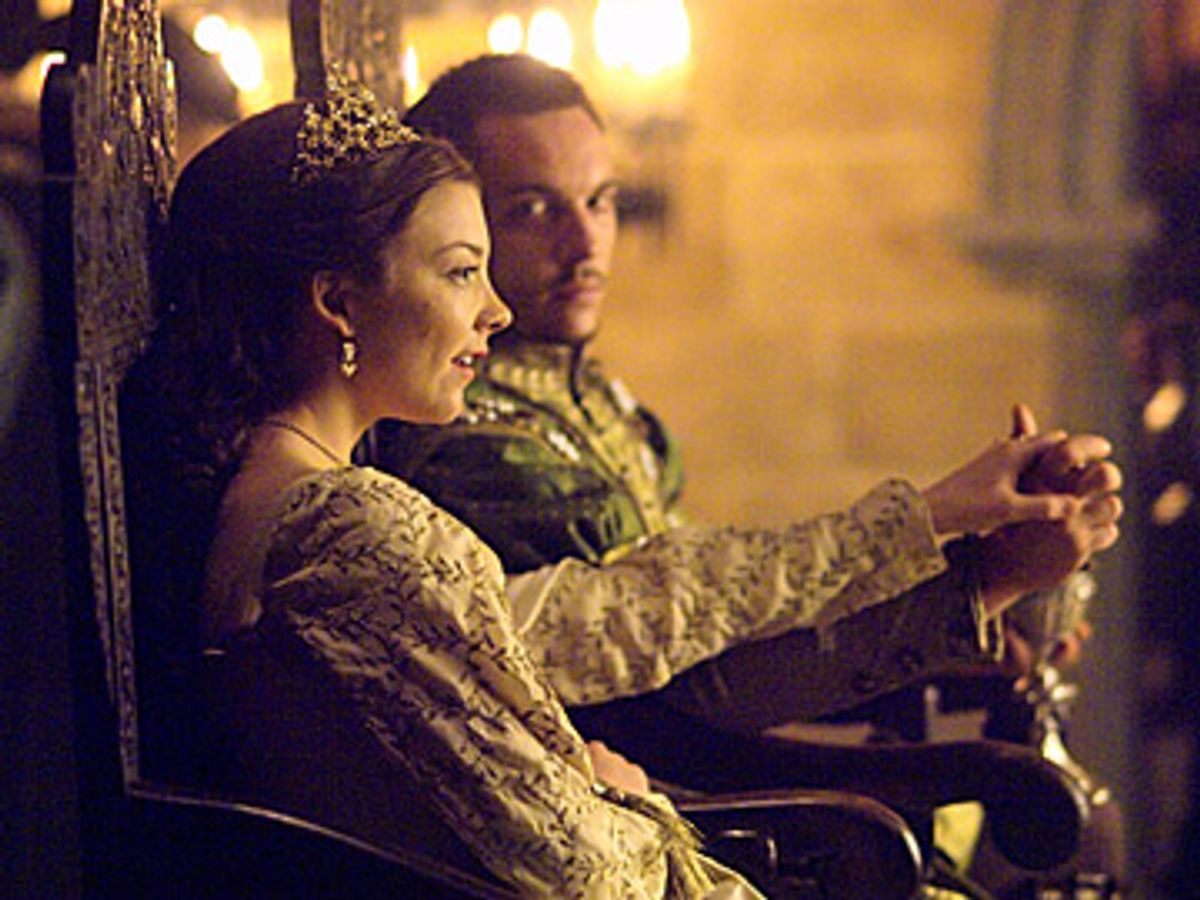 The first season of Showtime's "The Tudors" unfolded as one part historical drama, one part bodice-ripper. Like the best romance novels, the drama series milked history for its grand castles, glorious chapels and elaborate gardens, filling them with attractive young people in velvet gowns, enormous gold chains and jeweled tiaras. Dour-looking men in robes spoke in hushed tones about the power struggle between King Henry VIII (Jonathan Rhys Meyers) and the Catholic Church, but the heaving bosoms and heavy breathing were the main attraction. The historical twists in the road were merely foreplay; this was soft porn dressed up in exquisite period costume.

At the start of the second season, the seduction is complete, and King Henry VIII is ready to bed his mistress, Lady Anne Boleyn (Natalie Dormer), at last. Queen Katherine of Aragon (Maria Doyle Kennedy) has been dismissed from the residence, Cardinal Wolsey (Sam Neill) has committed suicide in the wake of being stripped of his office by the king, and Sir Thomas More (Jeremy Northam) has resigned from his post as chancellor in protest of the king's intention to marry his mistress. "The church is broken!" Lord Boleyn (Nick Dunning), Anne's father, gasps demonically as the king is declared the supreme ruler of the church as well as the country. Yes, lives have been crushed and the church has been subverted, all so the king can finally get down with his lady. Lady Anne knows just what will get him hot, too: "Now, my love, let me conceive, and you will have a son!" Her face takes on the slight sneer of porn stars, and the king makes his move.

Finally! No more heavy-lidded glances or making chase through garden mazes! No more clenched teeth and sultry whispering and royal hand jobs! Maybe now we can breathe a little life into those sullen men of "The Tudors" (second season premieres 9 p.m. Sunday, March 30), pacing and scowling over the threat to the church or lamenting the king's increasing power or planning new ways to make the split with the church more complete. We spent the first season hearing these men repeat the same threats from the sidelines. Now at least there's some action: a poisoning, an attempted murder, a deadly joust, a sniper crouched in a window. Loyalties are tested and half of the king's former confidants feel betrayed. Meanwhile, the pope himself (played brilliantly by Peter O'Toole, whose offhanded eeeevil calls to mind the emperor from "The Empire Strikes Back") refers to Anne Boleyn as "the king's whore" and muses, "Why doesn't someone just get rid of her?"

Things have certainly taken a dark turn since those halcyon days of jousting and flirting and tossing back gold chalices of wine. Still, what we mostly get is talk -- reports of the latest news from Rome, conversations concerning the queen's displeasure, plans to elevate Thomas Cranmer to Archbishop of Canterbury so the king can get his annulment. And even in the most intimate discussions, all parties express their true feelings in the clearest of terms, leaving little to the imagination, either in the scene itself or in the events that it might foreshadow. Take this bit of detailed advice offered to Charles Brandon (Henry Cavill), Duke of Suffolk, when he tells his wife, Catherine, that he's annoyed that he has to attend Anne Boleyn's coronation:

Catherine: Can you not plead some indisposition?

Suffolk: I could. Even though the king has made me high constable for the day. But if I did, His Majesty will remove my head and then I should be genuinely indisposed.

Catherine: So keep your head! It's a pretty head in any case, and I don't want to lose it either. But store up your knowledge and your anger. Don't act impulsively; it's always a mistake. But one day, with others so indisposed, use them both. If you can, bring her down and destroy her!

And while the show's portrayals of King Henry VIII and Cardinal Wolsey and Lady Anne Boleyn feel reasonably vivid, there's a flatness to them, as if it's enough to merely tell the story convincingly and make everyone look damn good in corsets and puffy sleeves along the way. Without any depth or detail to the heroes and villains here, each power shift feels at once belabored and rushed, as it did in the first season: Men are burned at the stake or carried off to rot in the Tower of London, the king declares that heads will roll, and they do, but there's no real bite to any of it, because it's all plot with very little character to flesh it out.

This is a drama that hinges on a few simple words: seduction, temptation, envy, and lust for power. Yes, these are driving forces in the world. Yes, Shakespeare employed them time and again with great flair. And yes, it's fascinating to think that a king could take down the entire Catholic Church simply because he was an arrogant prick who wanted a male heir and his mistress refused to sleep with him until they were married. But more shades of emotion are required to elevate "The Tudors" from the status of the beautifully shot, skillfully costumed, historically accurate soap opera.

So many cable dramas aspire to follow in the hallowed footsteps of "The Sopranos," but few will succeed until their writers learn to reveal the emotional groundwater of a character through vivid, memorable scenes. Think of Tony Soprano, feeding the ducks in his pool, or his sister Janice, fretting about drowned children, or poor doomed Bobby, playing with his train set or coming home from a hit in Canada and hugging his little girl by the lake. Or think of Don Draper in AMC's "Mad Men," grimacing through a beat poetry reading but recognizing that there's a freedom to that world that's missing from his. To paint these moments in detailed, vibrant strokes is to make us feel what these characters feel. We can't care until we're pulled into their lives and shown what they long for and what makes them feel weak. This was the singular triumph of "The Sopranos" -- letting us fall in love with a big, fat, snarly bad guy.

If that's possible for a mob boss, surely it's possible for a self-serving, hot-tempered king. But we rarely see King Henry VIII in unguarded moments. Instead, we see him striding through dark corridors, glowering and bellowing commands. We see him throwing himself onto Lady Anne and pulling up her skirt and, later, defending her honor. Like a merciless God, he intimidates, he bequeaths power and he takes it away. And eventually, we know that Lady Anne will marry him, and things will fall apart. We can imagine how it will look, what words will be exchanged, how she'll go from a proud, power-hungry queen to a fallen woman, facing down a disgraceful death. If this depiction never surprises us or makes us feel something unexpected, if it never transcends what we've read and what we can imagine, then why watch? Just to see what Lady Anne is wearing at her coronation?

Throughout the first season and the first four episodes of the second season, there's one scene that stands out: Lady Anne and King Henry VIII are dining by the fire when a messenger comes and reports that Queen Katherine has left the residence at last. "She regrets that you did not wish her goodbye, and she inquires after Your Majesty's health," the messenger says.

The king gets up from the table and beats the messenger in the face. "Tell the queen I don't want any of her goodbyes! I do not care if she asks after my health or not! Let her stop this and mind her own business! Do you understand me?"

Suddenly we recognize that the man can't help mourning the queen's absence. She has been a partner to him for 20 years, and now she's gone. "Everything is beautiful, don't you think?" Lady Anne asks, trying to get the king to snap out of his dark mood. "Yes, everything is beautiful," the king answers, but we don't quite buy it.

This is the first time we've seen the king with mixed emotions. If he and the other characters of "The Tudors" were to reveal their desires and their weaknesses through colorful actions or quiet moments, instead of through incessant talk and strategizing, then "The Tudors" might stand a chance of being more than a slightly dark romance novel come to life. Otherwise, this pretty bit of history will remain utterly forgettable.