This movie about card-counting MIT math geniuses in Vegas looks like a good bet, but don't double down. 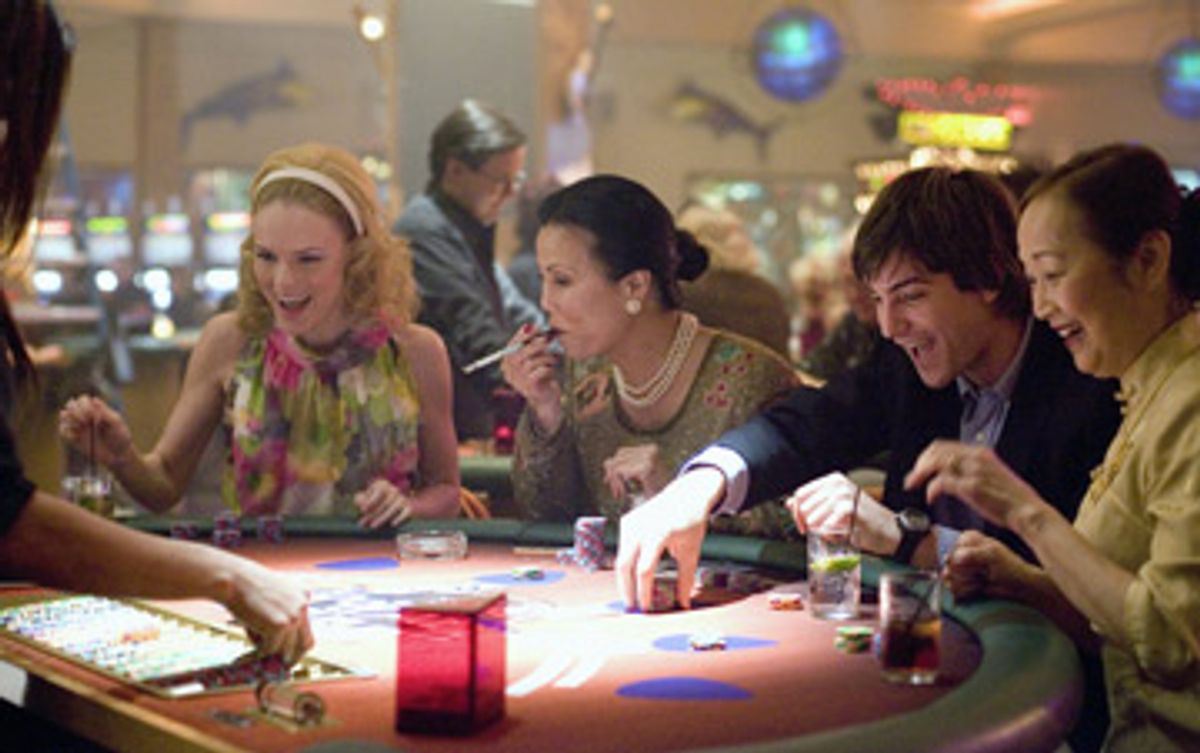 Some 30 minutes into Robert Luketic's "21," based on the true story of a bunch of MIT students who put their card-counting skills to work in Vegas, I almost had myself convinced that I was watching a reasonably entertaining mainstream picture -- until I realized that it made almost no sense at all. Jim Sturgess, last seen in a pair of tights in "The Other Boleyn Girl," plays Ben, an upright, superbright MIT senior who's getting ready to move on to Harvard Medical School. Now he just has to figure out how to pay for it. As if on cue, Kevin Spacey's mad math professor Micky Rosa pops onto the scene (shouldn't he materialize with a puff of smoke, bearing a pitchfork?) to show him how he can make millions of dollars, zillions even. How, you ask? Just by counting cards, a skill that's easily learned with just a few visual and verbal aids, as long as you happen to already be a math genius.

Rosa welcomes Ben into his coven of blackjack geeks, which include a classy-looking blonde named Jill (Kate Bosworth, who manages to look stunning even in a field hockey player's haircut), whom Ben already has the hots for. What Rosa doesn't tell Ben is that being too good at counting cards can get you beaten up by Laurence Fishburne, a small detail that you can bet will eventually add frisson to the proceedings. Fishburne plays a casino security consultant who has his own hard-luck story: He's about to be phased out in favor of facial-recognition software designed to collar smarties like Ben and his compatriots, even though what they're doing is perfectly legal -- it's simply that the casinos don't like it, for obvious reasons.

Luketic, working from a script by Peter Steinfeld and Allen Loeb (based on Ben Mezrich's "Bringing Down the House: The Inside Story of Six M.I.T. Students Who Took Vegas for Millions"), takes a degree of care in setting up the necessary details at the beginning of the picture and then promptly forgets all of them. Ben, in voice-over, explains that he dons various disguises in Vegas to avoid being recognized at the tables. In those early moments, we even see him fastening a fake mustache to his otherwise hairless upper lip. But through most of the movie, he's just plain old Ben, being greeted warmly by the dealers (under a fake name, but even so) when he shows up at the tables. So much for hiding his identity. His teammates, particularly the two women, Jill and Kianna (Liza Lapira), occasionally don wigs and tacky getups to deflect attention. They also stay in luxury suites provided by the casinos and spend thousands of dollars on flashy clothes and metallic designer handbags -- all this after we've been told that one of their strategies is to "fly under the radar."

But flying under the radar is so boring to film! And it means you can't put a shopping montage in your movie. Luketic gives us that montage, adding numerous inane plot twists and a convenient villain whose behavior defies logic or meaning. He even gives Ben a sweet, hardworking mom, played by Helen Carey, who, clueless about Ben's extracurricular activities, tries to press a check for several thousand dollars -- her life's savings -- into his hands for med school. At least Luketic doesn't put her in threadbare carpet slippers and a kerchief.

Luketic isn't a total moron. He has made some mindlessly entertaining pictures ("Legally Blonde"), as well as some plain old mindless ones ("Monster-in-Law"). His 2004 "Win a Date With Tad Hamilton" didn't wow me until I happened to catch it a second time, when its quiet charm won me over. But "21" isn't going to get another chance. A pleasant evening of whist would be a lot more exciting.