The Clinton campaign's circulation of right-wing materials to denigrate a top Obama advisor reeks of cynicism. 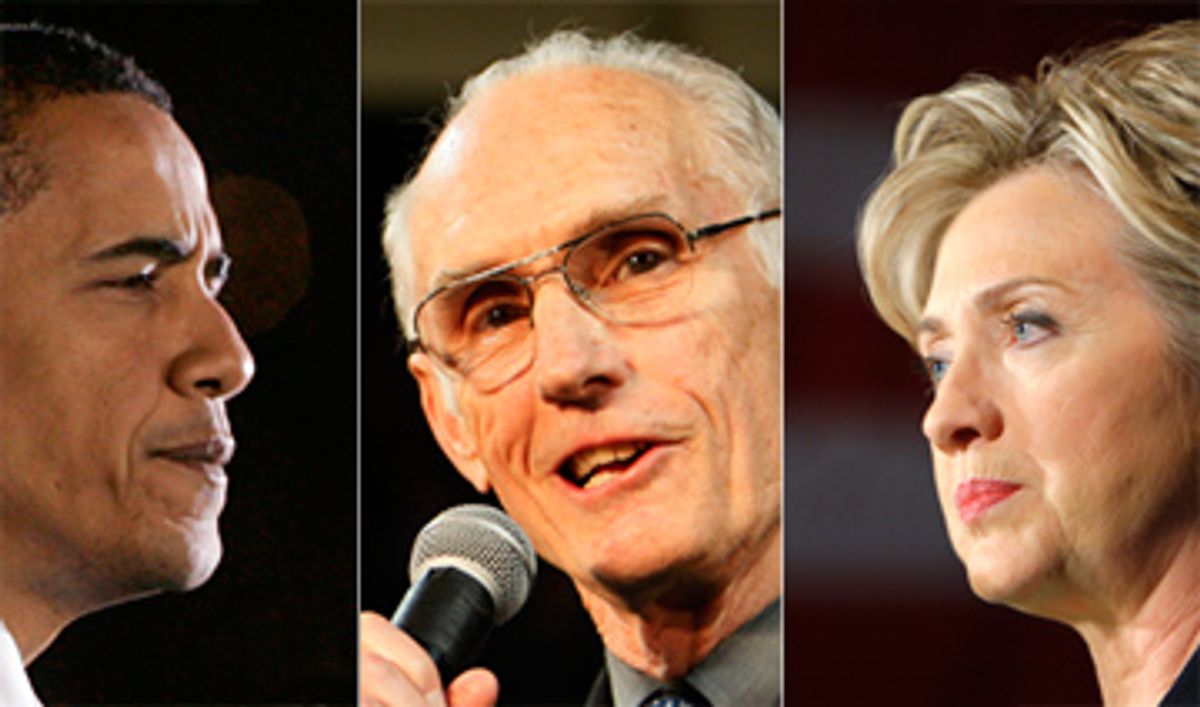 Over the past few months, the emotional trajectory of the Democratic presidential primary has dropped precipitously, from inspiring to enervating, turning into a chronicle of petty sniping and amplified nastiness that will harm the party, the nation and the eventual nominee. Neither side is innocent of driving the discourse downward -- and everyone observing the process knows that both sides have crossed lines of decency and decorum, whether by accident or design.

Having watched many nasty political campaigns, however, including some far worse than this one, I tend to discount the constant hysteria over "dirty tactics" that is now background noise in almost every election. But Hillary Clinton's campaign crossed a symbolic boundary this week when its operatives sent around clips from the notoriously Clinton-hating extreme-right press to denigrate Barack Obama and his advisors. It was slightly eerie to watch those items arrive in the mailbox along with photos of Sen. Clinton at an editorial meeting of the Pittsburgh Tribune-Review -- where she was seated next to that newspaper's owner, a certain Richard Mellon Scaife.

Although the reported encounter between Scaife and Clinton was mildly startling, it represented normal political behavior and nothing remarkable. Actually, they have even met before at least once, when the right-wing billionaire attended a White House dinner for donors to the Executive Mansion's beautification fund on Jan. 21, 1998 -- the same day that the Monica Lewinsky scandal broke on the front pages. (Clinton describes their encounter on the receiving line that night rather acidly in her autobiography, "Living History.")

Clinton did not look happy to be meeting him again in Pittsburgh, but his newspaper there boasts a circulation of about 150,000 on weekdays and nearly 200,000 on Sundays -- which means that any candidate is likely to respond to an invitation from its editorial board. One of Clinton's best qualities is her fearlessness, and it is hard to imagine her shrinking from the challenge of a meeting with Scaife and his staff. She may well have felt that in the presence of the man who had more or less accused her of conniving in the death of Vince Foster, she clearly held the moral high ground.

If so, however, her campaign plunged from that plateau by dispatching a pair of articles from the American Spectator and World Net Daily in an attack on Merrill "Tony" McPeak, the retired Air Force general and chief of staff who now serves as one of Obama's principal military advisors. Both stories sought to create the impression that McPeak is not only anti-Israel but anti-Semitic -- and thus taints Obama -- because of crude comments he made during a 2003 interview with the Portland Oregonian. The obstacle to a more balanced Mideast policy, he said, resides in "New York City and Miami." In those cities, he said, "we have a large vote -- vote, here in favor of Israel. And no politician wants to run against it." He went on to apportion a share of blame to the religious right as well.

What McPeak's remarks revealed is less an anti-Semitic mind-set than an ignorant reading of the Jewish community's attitudes toward Israel, the Palestinians and the peace process. In fact, most Jewish voters here, like most in Israel, have long supported a two-state solution. Actual anti-Semites have far more insulting and conspiratorial ways to describe Jewish support for Israel. And in any case, to dredge up a single comment made by an advisor five years ago to inflame doubts about Obama's bona fides is cheap. It was reminiscent of the character attacks endured by Clinton when she ran for the Senate in 2000 and her enemies tried to persuade New Yorkers that she secretly hates Jews. Perhaps the Clinton campaign felt justified in slamming McPeak because of his own recent assault on Bill Clinton, whom he accused of "McCarthyism" over an innocent comment praising the patriotism of Hillary Clinton and John McCain. Indeed, McPeak was required to apologize for an ugly sexist statement about Sen. Clinton, and he sometimes sounds like a loose cannon who should be locked up in the policy shop. Whatever McPeak's offenses, however, the Clinton campaign went too far in responding. When it starts circulating material from the same ultra-right rags that have routinely accused the Clintons of felonies and treason, its behavior reeks of cynicism. Shall we all start reading World Net Daily for news and guidance? If so, we could learn the "real story behind the Clinton body count," how Hillary plans to "snatch wages" from uninsured workers, the latest developments in "Hollywood mogul" Peter Paul's fraud lawsuit against Bill Clinton, and hot new charges by both former impeachment counsel David Schippers and former White House employee Kathleen Willey that the Clintons burglarized their homes. That latter story appeared in World Net Daily a few weeks ago under the permanent slug "All the Ex-President's Scandals."

As for the American Spectator, once the secret headquarters of the Arkansas Project and still edited by the imaginative R. Emmett Tyrrell Jr., there is no shortage of educational material in that publication either. Without even entering the archives, where stories can be found recounting Bill Clinton's collusion in the cocaine-importing industry with the CIA, it is possible to learn about the "vast record of Hillary's joint misdeeds with her spouse," beginning with their highly profitable Whitewater investment. That column, which appeared last October, said both Clintons are "so corrupt it is frightening"; said that Hillary is "unfit for elective office," let alone the presidency; and concluded passionately: "If Obama and Company are too frightened to say those things, and to make them stick, then they are cowards, pure and simple. "

Of course "Obama and company" have said much that is unkind and untrue about the Clintons before and since, but it is all too easy to imagine the outrage of the Clinton spokespersons if the Illinois senator had started mailing around old clips from the American Spectator. This incident offers Hillary Clinton an opportunity to consider how she wants this campaign to end. If she beats the odds and wins, this kind of behavior will taint her victory. And if she loses, as seems more likely now, is this how she wants her historic campaign to be remembered?