Why the dark and madly poetic Destroyer is my favorite rock band in ages. 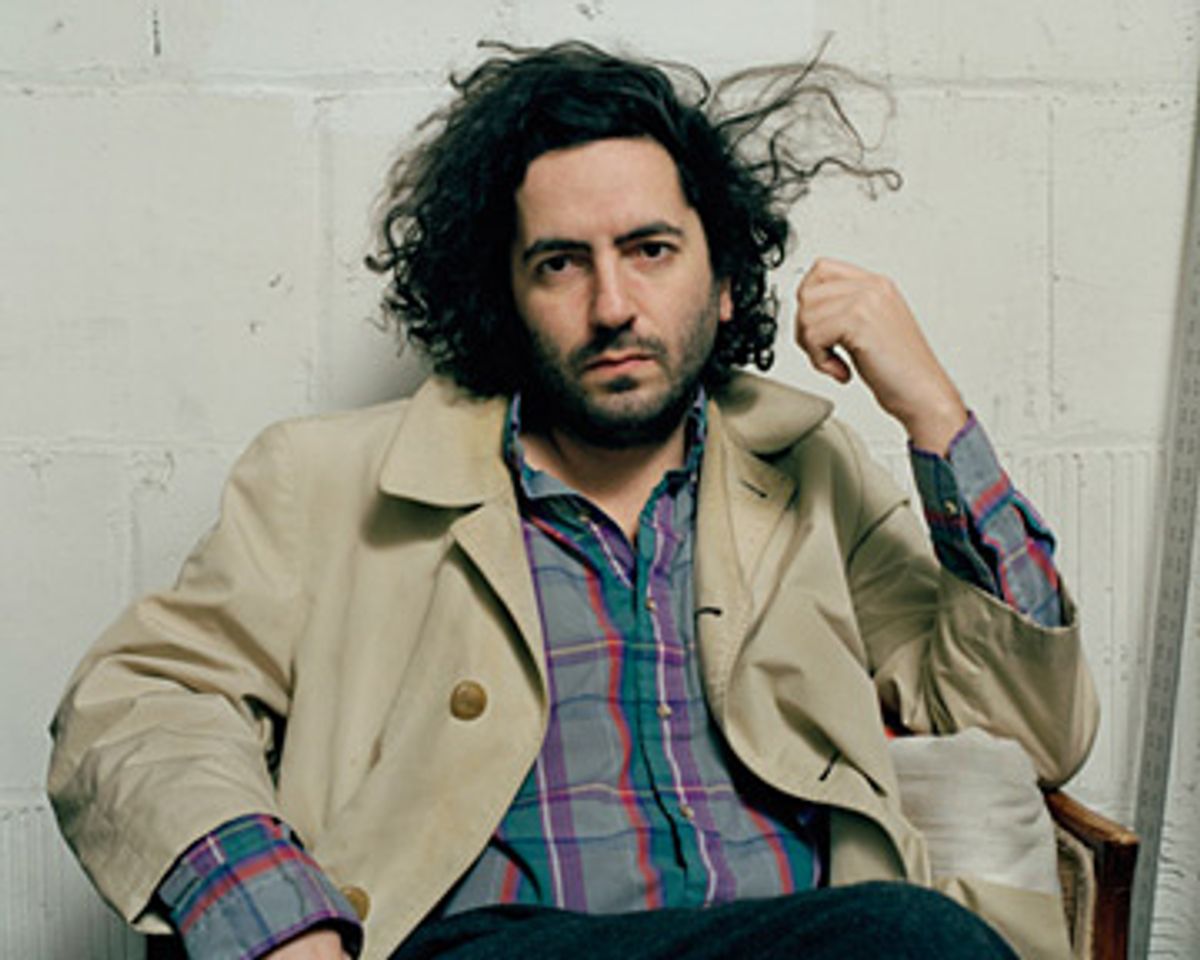 It's hard to choose a single musical moment to explain how and why Destroyer, an indie rock band from Vancouver, led by inscrutable singer and songwriter Daniel Bejar, 35, is to me an endless source of pleasure and bedazzlement, my favorite rock band of recent times. But I'm happy to pick one because it's moments, like sharp truths in equivocal conversations, that define Destroyer and make its musical vocabulary one of the most original in rock.

Destroyer has just released "Trouble in Dreams," its ninth album in 12 years. As with many indie bands, it is loved by a small group of fans who follow rock closely, but remains off the radar of most listeners. I discovered Destroyer six years ago by reading a brief review of its 2002 album, "This Night," in the New York Times. Since then I have been convinced the band could find a wider audience. I don't mean it should be more popular -- that's a critical cliché that never comes true for cult bands anyway -- but that casual rock fans who remain on the lookout for something new are likely to be wowed.

The moment I want to tell you about comes in the opening song of the previous album, "Destroyer's Rubies," released in 2006. That song, "Rubies," dawns with a slashing chord on electric guitar. The crisp fanfare gives way to silence. The song then ventures through a cityscape of tempos, heeding the familiar signposts of indie rock: warm acoustic guitars and snaking electric ones, unkempt keyboards, obliging but reckless percussion.

As usual, there's nothing predictable about what Bejar is trying to say in "Rubies." Nobody in rock has created a universe of language quite like his. Myriad images and stray thoughts mash together in a solipsistic purgatory, a Borges student schooled in the Velvet Underground. It's always dark and frightful in Bejar's world, and he always seems to be escaping from somewhere and someone.

In "Rubies," wandering through a park, he declares he's disgusted with "shadowy figures babbling on about typical rural shit." Typical me, he says, "I gave my cargo to the sea." He then pauses to lament: "All good things must come to an end." The band has been racing to keep up with the vexed singer when, six minutes into the song, the instruments disappear and are replaced by warmly picked acoustic guitar notes. Out of the din, Bejar sings, "Don't worry about her, she's been known to appreciate the elegance of an empty room."

I laugh to myself every time I hear the line because I always forget it's coming and because it appears to mean nothing and then everything about the woman in his life. But that's what's special about Bejar. Opaque on the surface, his songs open up gradually and surprisingly, rewarding countless listens. Bejar is postmodern rock's alchemist, transforming the timeworn elements of the rock that once seemed new -- R.E.M. and Nirvana and Radiohead -- into something fantastic again.

I'm not sure what's in Canada's air these days, but whatever northern musicians like Arcade Fire and Broken Social Scene are breathing, it's resulted in some of the freshest rock in ages. Like the wondrous and tormented country-punk siren Neko Case, Bejar is a part-time member of the Vancouver group New Pornographers, whose command of classic pop structures is uncanny and at times transcendent. In his own band, Bejar seeks to destroy every trope in rock, country and folk -- all strains of his sound -- that could possibly be called classic. The fey, the precious, the confessional -- the "Garden State" soundtrack -- it's all so done. "Kid, you better change your feathers 'cause you'll never fly with those things," Bejar sings on "Destroyer's Rubies," as if he was addressing all the young Werthers strumming their guitars in sad clubs.

Bejar seems to live in immortal fear of his lyrics and tunes becoming a cliché, and in every song aims to go his own way. Of course, with a mind sculpted by generations of pop music, he has to sing a snippet of "Go Your Own Way" by Fleetwood Mac to clear his musical palate with the scraping tool of irony. He does so in one of his most moving songs, "The Music Lovers," from his 2004 album, "Your Blues," a pastoral that seems to be about fleeing with his girlfriend (again) the expectations of the music business. "We stole a gondola to the sea, and ditched the chaperones on jewel-encrusted roans who called us 'unprofessional.'"

In truth, who knows if that's what the song is about. The moment you say for certain what Bejar's lyrics are about is the moment you lose touch with the beauties of his music. What he has created is a rock cubism whose disparate parts fit together in an organic and subconscious way that couldn't be assembled in any other order. You can't read his songs like a story or feel your way through them along familiar emotional paths. By upsetting expectations, he allows us to absorb his odd and fleeting truths about love and hate and beauty and regret and all the things that a society institutionalized on greed and power pours into us. Bejar is not a happy man, thank goodness.

Many of these things about reassembling rock into something new have been said about Pavement, and Bejar's debt to Pavement is clear. Personally I've admired Pavement but not always connected with Stephen Malkmus' jumbled verse, which at times remains only opaque and glib. In one light, Bejar's lyrics read like some seriously bad poetry. Try this on for size: "I gave you a flower because foxes travel light and a penny for your thoughts was never enough." But I don't hear it that way. I never sense Bejar is writing nonsense verse for its own sake. I'm not sure what he's trying to work out of his soul, but I always sense an emotional honesty in his voice and pungent phrases. This is, after all, rock and not poetry class.

There are plenty of moments to admire in the manic Destroyer albums before "Your Blues," Bejar's most musically somber album, all of its instrumentation, except for acoustic guitar, played on Roland synths. But it's with "Your Blues" that Bejar found a mature singing voice, settling into deeper and richer registers. Often, his actual timbre resembles that of David Bowie, during the thin white duke's salad days in the '70s. But his inflections are similar to Bowie's too. Bejar sings like he is speaking directly to you, with all the observations and accusations, irony and sincerity of a real conversation. You hear that style in Ray Davies and Lou Reed, and now I think Bejar has acquired a real sonority that draws out his emotional edges.

"Trouble in Dreams" is wonderful all the way through. It ventures all over the musical map, the multi-tempo ballads stealing from country and R&B, and perhaps relying on more chunky rock rhythms and messy guitars than "Destroyer's Rubies" and "Your Blues." The essence of Destroyer remains the language that Bejar unearths to express his internal chaos, and for him, as ever, wit is the redemption of despair.

"Common scars brought us together," Bejar sings in a slow lament, backed only by an acoustic guitar, on the new album. Just as I'm worrying he's gone literal and earnest on me, he follows the line with gently mocking voices going, "Ahhh-ahhhh." Then, beneath an "idiot's moon" in the night sky, the rest of the band enters on a lush chord, and, after a silent pause, Bejar sings, "introducing angels," slowly stretching each syllable along some ancient melody. It's stunning.

The real marvel on the new album is "Shooting Rockets (From the Desk of Night's Ape)." It's Destroyer in microcosm; it contains all the themes and artistic allusions and nods to Vancouver that punctuate his library of songs. (For fun, check out the Destroyer Wiki page, in which enterprising fans are annotating Bejar's lyrics, hyperlinking his references to, among others, Euripides, Willie Nelson, Camus, Morrissey and Victorian art critic John Ruskin.)

The song is a gorgeous little sick opera built on an ingratiating melody announced on piano. "Who let these animals into my kingdom?" Bejar sings, referring, in naked misanthropy no doubt, to human beings. Also, as in so many of his songs, there's a mondegreen factor at work. As a listener, you experience countless revelations in mishearing Bejar's lyrics. In "Shooting Rockets," he confesses to being ruled by lust: "And it'd be true what they say, were they to say, 'Why, yes, I dig the skirts." At least that's what I thought he was singing. A peek at the lyric sheet reveals he was saying "scourge" not "skirts."