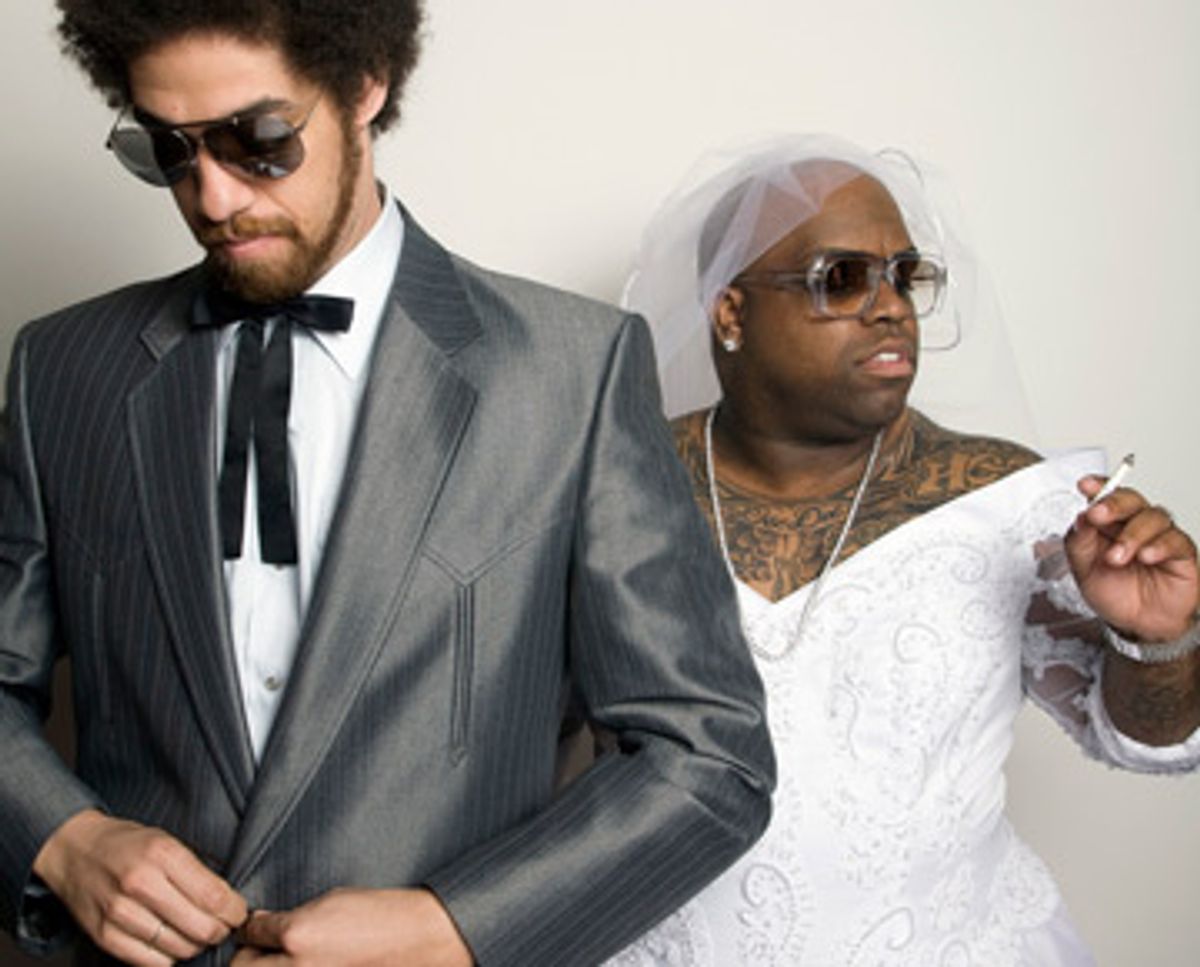 If 20 years ago I had predicted one of the most popular bands of the post-millennium would sound like a mélange of Beach Boys surf music and Public Enemy sonic collage with the angst-ridden lyrical content of Depeche Mode -- all created by a band that doesn't actually play instruments -- I'd have been accused of cribbing from Philip K. Dick.

In 2006, M.C./singer Cee-Lo Green and producer Danger Mouse launched a one-off side project under the name Gnarls Barkley. The duo spent seven weeks in the Billboard Hot 100 top five with their omnipresent hit "Crazy," and sold over 3 million copies of their brilliantly off-kilter "St. Elsewhere" album. With the equally eccentric "The Odd Couple" just out, one wonders if Gnarls Barkley will get laced into the sophomore straitjacket or will instead succeed at becoming the most preeminent rock duo this side of the White Stripes.

From the start, the duo set themselves apart as a mythic spectacle rather than just a rapper (Cee-Lo is late of the Atlanta-based hip-hop quartet Goodie Mob) and a producer (Danger Mouse is best known for merging Jay-Z and the Beatles on "The Grey Album"). They alluded to various pop imagery in promotional photos for "St. Elsewhere," sporting ragtag Halloween outfits from "A Clockwork Orange," "Superman," "The Wizard of Oz" and many more. Gnarls Barkley made surreal visuals part and parcel of their musical package, in a way rarely seen in a group with roots in the keep-it-real hip-hop culture. (Other exceptions include Missy Elliott and OutKast.) Yet with next to no emceeing on "St. Elsewhere," Gnarls stretched beyond hip-hop to pop, and so points of comparison for their cosmetic strategy extend beyond rap to acts like Devo or Daft Punk. Their wacky attitude seemed rooted in having nothing to lose; prior to "Crazy," neither had had any experience with outsize success.

N*E*R*D, another hip-hop-related outfit with alternative-rock leanings, put out their 2001 debut album "In Search of ..." in two different formats: an electronic version in tune with producer Pharrell Williams' more traditional fare and a rock version with backing tracks performed by a band called Spymob. Seven years later, Gnarls Barkley have concluded that only one version is necessary to serve the urban alternative audience. "The Odd Couple" satisfies as completely as "St. Elsewhere," but still fails to answer the question of quite how seriously we should take Gnarls Barkley.

Thankfully, the two don't switch gears on "The Odd Couple" to chase the fluke of their accidental commercial achievement. Danger Mouse's cut-and-paste dicing up of sampled instruments and live playing recalls trip-hop, in the stuttering snare drums on "Open Book." (He'll soon be producing albums for both Beck and former Tricky chanteuse Martina Topley-Bird.) The group sometimes plays things tongue-in-cheek -- on "Blind Mary," Cee-Lo sings of love for, yes, a blind girl named Mary -- but it's equally clear that Cee-Lo is targeting the same post-racial audience that pundits have discovered in the wake of Barack Obama. For example, "Would Be Killer" (wherein Cee-Lo entertains particularly homicidal thoughts) has something of a twin in the suicide-minded "Just a Thought" of "St. Elsewhere," and neither, thematically, would sound very out of place on an early Black Sabbath album -- a crossover pandering to the white rock kids. This post-black sensibility allows Cee-Lo to meld hip-hop and indie aesthetics to his heart's content.

A career of middling success seems to have encouraged Cee-Lo to craft the music he'd really like to be making, which appears to be alternative-rock tunes. (See the last album's brilliant Violent Femmes cover "Gone Daddy Gone.") Unbeholden to rigid hip-hop audiences, Cee-Lo's not ashamed to fly his indie freak flag. Gnarls Barkley's fans are largely more white than black, practically by design. It's funny to think of Cee-Lo -- the rotund, 33-year-old black father of three -- whining his way through the exurban-teenager targeted "Whatever": "I don't have any friends at all/ 'Cause I have nothing in common with y'all ... Shut up Mom, it is not okay." While wiggers all across America have been aching for street credibility, Cee-Lo channels suburban boredom.

"The Odd Couple" has already been critically regarded as a darker album than its predecessor, with lyrics the Cure's Robert Smith would instantaneously relate to. (On the closing track, "A Little Better," Cee-Lo sings over a bouncy hip-hop bass line: "It's probably plain to see/ That I got a whole lot of pain in me/ And it will always remain in me.") But the visual jokes and pop culture referencing create a disconnect in just how sincerely one can take these guys. Gnarls Barkley lack authenticity as a rock group in the same way that Lindsay Lohan comes up short as a serious actress; even while savoring the performance, you can't help thinking it's all a bit of a plasticized put-on.

The masquerade costumes and occasional goofiness serve as a smoke screen for the angst. Their song titles alone ("Who's Gonna Save My Soul," "Run [I'm a Natural Disaster]," "Charity Case") suggest that Cee-Lo wrestles with demons. But when looking at magazine photos of the group decked out as "Back to the Future" characters, it's easy to miss Gnarls Barkley's depth for their superficiality -- and it's impossible to gauge which is more important to them. The eerie final lyric on "The Old Couple" offers a clue, though. It refers to Cee-Lo's mother, who became a quadriplegic after an automobile accident in the mid-1990s and died two years later, and his father, who died when he was 2 years old: "I wanna thank you Mom and Dad/ For hurting me so bad/ But you're the best I ever had," he sings in the fadeout to "A Little Better." Gnarls Barkley's high-concept clowning just may be the proverbial laughter that keeps us from crying.

Miles Marshall Lewis is the Paris-based author of two music-related books; he blogs regularly at Furthermucker.com.