"Flight of the Red Balloon"

This quietly astonishing picture has the power to carry you outside of yourself and float you away. 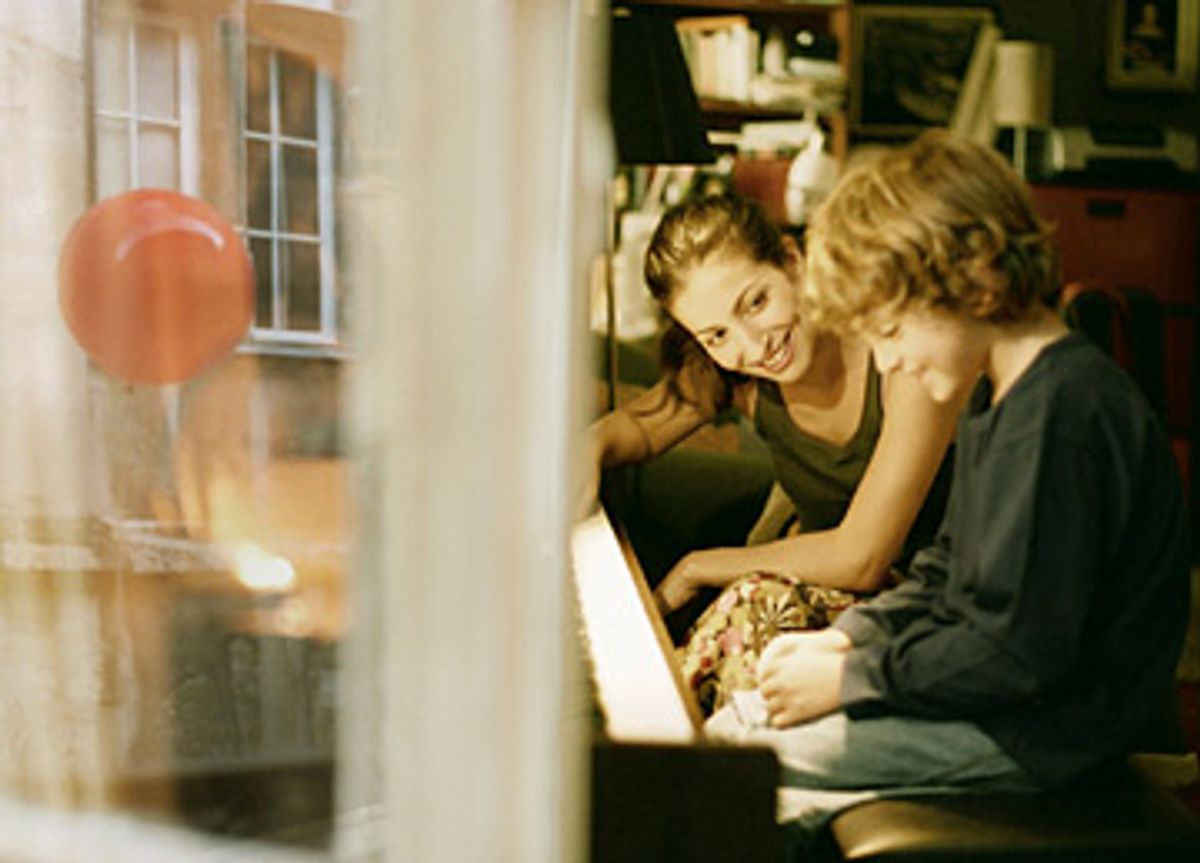 Taiwanese director Hou Hsiao-hsien's pictures are more like delicate paper cutouts than movies. He never outlines anything too starkly -- he'd rather cast shadows and capture glimmers of meaning than make declarative statements.

But overselling the subtlety of Hou's movies -- his last was the marvelous triptych of love stories "Three Times" -- can make them seem like abstraction rather than the beautifully concrete traceries that they so often are, and there's nothing elusive or difficult about his latest, the quietly astonishing "Flight of the Red Balloon." This is a flight of fancy grounded in real life. Hou's inspiration is Albert Lamorisse's 1956 "The Red Balloon," about a lonely young Parisian boy who is befriended, and seemingly protected by, a balloon that follows him everywhere, even when he's not clutching its string. Hou's picture is a love letter to the earlier one; it also features a lonely boy, Simon (played by Simon Iteanu), and a watchful red balloon. And like Lamorisse's film, it's set in Paris, but through Hou's eyes, the setting is a cross between the dream Paris and the real one, as if Hou were a visitor not from another country but from another time, or perhaps another planet. Hou and his frequent cinematographer, Mark Lee Ping Bing, give the city a pearlescent glow, like a prize to be found within a giant oyster's shell. The look of the movie, along with its gently unfolding, unforced narrative, gives it a momentum that's both soothing and urgent. This is a transportive picture, the kind with the power to carry you outside of yourself; it is itself a flotation device.

Lamorisse's film, which was made in postwar France, touches on the ways children are bound by adult rules that often don't make much sense, and on how the world can so often be hostile and confusing to children. Lamorisse himself defies authority by dispensing with the laws of physics, giving us a helium balloon that disobeys all the rules, a symbol of self-sufficiency and self-determination.

"Flight" uses Lamorisse's picture as a launching pad to suggest that, even in the days of meticulously planned play dates and endless soccer practice, there are certain things about childhood that don't change much. "Flight" draws a reassuring web between the old ways of life and the new, exploring the affection and sense of protectiveness that stressed-out modern parents feel for their children; the ways city children, specifically, respond to their environs, adamantly remaining childlike even in the midst of the symbols of progress and sophistication all around them; and the bonds that form, slowly and almost imperceptibly, between children and their caretakers, just out of casual, everyday interaction.

The picture opens with Simon trying to coax a red balloon, hovering nearby, to come with him. Will it or won't it? In that stream-of-consciousness patter that kids use when they don't know they're being observed, he offers it all kinds of bribes, including "a million pieces of candy." The balloon -- is it real or figurative? Does it matter? -- can't seem to make up its mind, but Simon at least has human beings to watch over him. His mother, Suzanne (Juliette Binoche), is a harried, distracted woman who supplies voices for a puppet troupe. She loves her son dearly but seems to know intuitively that he needs someone more attentive to look after him, and so she has hired a nanny, Song (Song Fang), a young woman from Beijing who has come to Paris to attend film school.

There isn't so much a story in "Flight of the Red Balloon" as a collection of textures that add up to something like everyday life. We see Song and Simon tentatively getting to know each other: She picks him up from school, and the two return to the modest, cluttered apartment he shares with his mom. She doesn't yet know the routine; she asks questions about it -- what should be done, and when? When two neighbors -- as it turns out, they're tenants of another apartment in the building, one of two that have been left to Suzanne by her late mother -- come to the door and assert that Suzanne has told them it's OK for them to cook in her kitchen, Song is skeptical. Before granting permission, she calls Suzanne, just to make sure. She moves quietly around the flat while Simon takes his piano lesson: The piano is located in the neighbor's apartment, which makes the whole kitchen-sharing business seem more logical. The two explore the city together, and Song tells Simon about a film she's making, based on "an old film, made in 1956" by Albert Lamorisse. Simon tells her things, too, relating a story that at first seems like a tall tale, about an older half-sister who takes him for jaunts around the city whenever she's there, which doesn't seem to be often enough.

"Flight of the Red Balloon" is about loneliness and anxiety -- not horrible, life-shattering loneliness and anxiety, but the kind that makes us human, and sometimes even holds us together. Simon is a generally happy kid, but as Iteanu plays him, there are the usual doubts and insecurities hovering about him: A happy childhood isn't necessarily a perfect one. And Binoche gives a wonderful, wide-open performance: Her Suzanne has a flurry of bleached-blond hair; she dresses in an assortment of crazily semi-matched outfits that suggest the splendid '70s ragbag finery she may have worn in her youth. The character is, at times, insufferable: She's self-absorbed, scattered, too artsy for her own good. But as the movie winds its way forward, we learn more about her life: She has a partner, Simon's father, who has been off in Montreal working on a novel forever, and who probably will never come back. The tenants who believe it's OK to use her kitchen without asking are friends of his, and they're a thorn in her side -- partly because they don't pay rent, and partly, it's easy to surmise, because they only remind her of her partner's absence and of how little he seems to care for her.

We also wonder how she makes ends meet: How much money does anyone make working for a puppet troupe? No wonder Suzanne is anxious and sometimes distant. But just as she's working herself into a series of little knots, she'll catch sight of her son -- perhaps flopped on his stomach in the flat, just being a kid -- and be brought back to the here and now, to the fleeting moment of his childhood. "Flight of the Red Balloon" is about, among other things, keeping that moment within reach, even though, by the time we reach adulthood, it may seem eternally out of our grasp. It's possible to keep that balloon nearby, even long after we've let go of the string.