In the fourth and final season of Sci Fi's "Battlestar Galactica," Starbuck is back, but the colonists struggle to keep the faith. 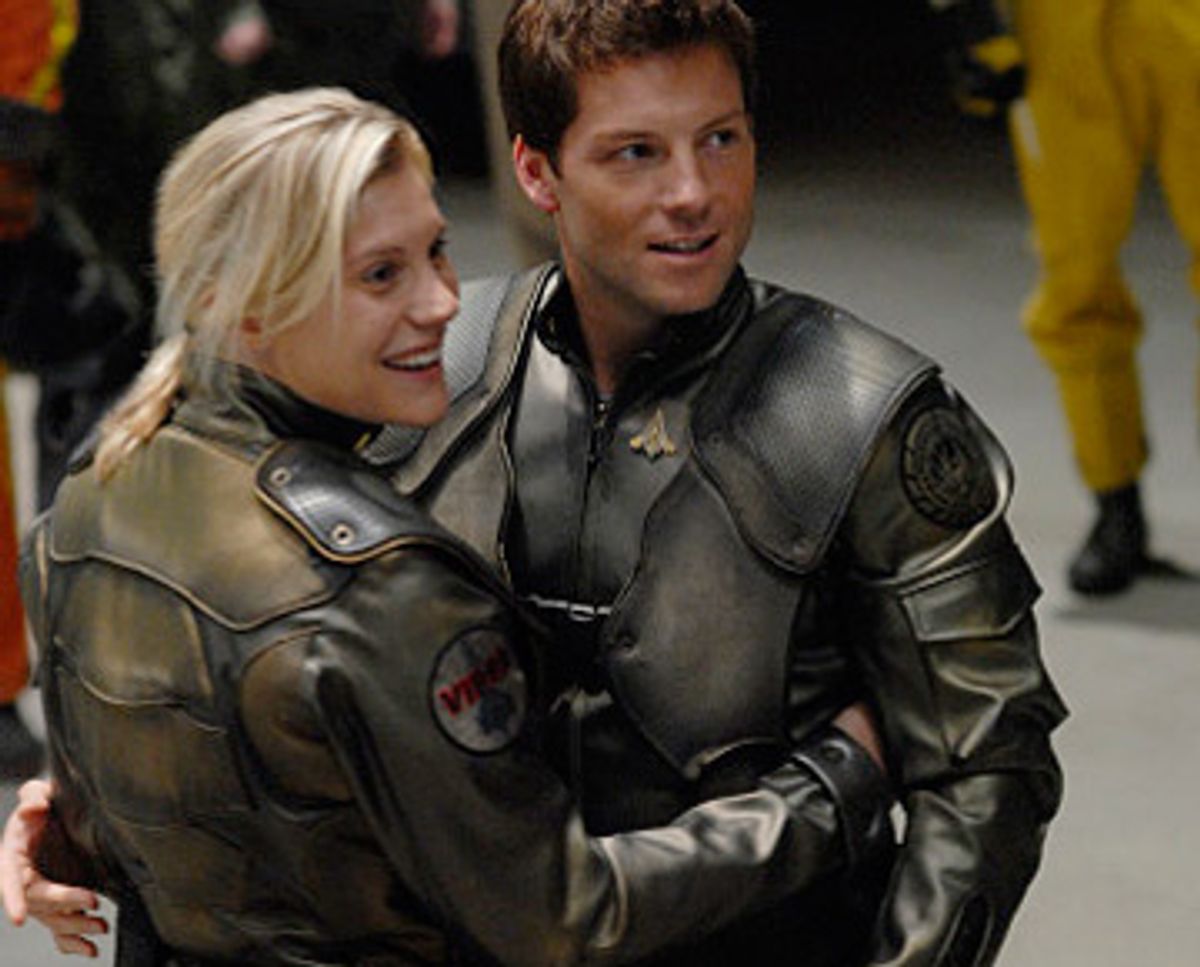 Starbuck is back! She's been to Earth and she knows the way and she's ready to show the colonists how to get there, if only someone will listen to her. But President Laura Roslin is suspicious. Chief Galen Tyrol is apprehensive. Even the man who loves her like a daddy, Adm. William Adama, is eyeing her warily, like she's a Cylon who might detonate a hidden nuclear device at any second. Sure, Lee Adama (Jamie Bamber) buys her story, but no one's swayed by that, considering how those two alternately swooned and slugged each other before Starbuck disappeared. This is Starbuck's (Katee Sackhoff) personal version of hell: She has the answer, but no one will believe her.

A fitting dilemma for the fourth and final season of "Battlestar Galactica" (premieres 10 p.m. EDT on Sci Fi; read our "Battlestar Galactica" primer here), a drama whose dark corridors and inky black space are haunted more by lingering doubts than they are by Cylons, the human-made robots who aim to exterminate humans from the universe. This is a story that returns often to the question of belief. In the absence of the structure provided by civilization or even a hunk of rock on which to park your spaceship safely for a few months, how do you nurture a belief system? This small band of colonists, floating through the abyss of space, struggles to bring the reassurance of faith into their lives despite the constant threat of annihilation by the Cylons, but the doubters are everywhere.

In past seasons, the battle between faith and doubt has played out in the conflict between President Roslin (Mary McDonnell), who has felt it's her destiny to lead the colonists to Earth, and Adm. Adama (Edward James Olmos), who has never bought into all the talk of gods and prophecy, at times flat-out refusing to cooperate with Roslin's designs. Eventually, the two leaders began to trust each other, and now they share a friendship that often feels more romantic than platonic, the comfortable love of a married couple who have weathered untold challenges over several decades together. Once she made peace with Adama though, Roslin clashed with Gaius Baltar (James Callis), who made a successful bid for the presidency only to cede control to the Cylons on New Caprica. Once the colonists escaped, Baltar was imprisoned for treason, but used his high-profile case as a platform to rail against Roslin's and Adama's oppressive regime like some scrappy Marxist revolutionary.

Of course, Baltar provides a crucial twist to the straight-arrow honor and righteousness of Roslin and Adama, because no matter how adamant and convincing Baltar's manifestos might be, he's consistently motivated to protect his own ass, first and foremost. From his days as a puppet of the Cylon regime to his hours scrawling antigovernment screeds from his prison cell, Baltar may look like an idealist on the surface, but underneath he's more like the self-serving dictator of some deeply corrupt little nation. Regardless of his circumstances, Baltar has always looked out for No. 1.

It's fitting, then, that Baltar's self-serving nature should be tested this season. After being judged not guilty of treason and released from custody, Baltar is ushered into the arms of a cult of adoring females who believe him to be some sort of a holy man. Although the fringe benefits -- young lovelies, eager to please -- are certainly welcomed by Baltar, this Jesus-like role throws him for a serious loop. We've seen bug-eyed Baltar tortured in so many ways over the course of three seasons: Seduced constantly by the Number Six (Tricia Helfer) in his head, haunted by the guilt of having yielded security details to the Cylons before their massive nuclear strike on Caprica, exiled to the Cylon ship and manipulated by the (of course!) foxy female Cylons there and, finally, reviled by most of the colonists as a traitor to humankind upon his return. There's never been a time when Baltar wasn't sweating and twitching under enormous pressures, but this savior role may present his most uncomfortable position to date. Asked to deliver his charges from sickness and evil, Baltar's eyes are full of raw fear. Could it be that the narcissist's ultimate purgatory lies in finally receiving the adulation to which he's always felt he was entitled?

But the biggest test of faith lies ahead for the four colonists who discovered, at the end of the third season, that they were Cylons: the lovable Chief Tyrol (Aaron Douglas); the volatile (and sometimes drunk) Col. Saul Tigh (Michael Hogan); Starbuck's estranged husband, Samuel Anders (Michael Trucco); and President Roslin's loyal aide, Tory Foster (Rekha Sharma). These four characters, apparently strategically placed in various vulnerable areas of Galactica's command, are forced to keep their discovery hidden while worrying over whether they'll be able to control themselves if a nefarious Cylon message or mission suddenly presents itself in their heads.

Keep in mind, these individuals have been relentlessly loyal to the colonists' cause -- all four were involved in anti-Cylon terrorist resistance on New Caprica. The realization of their true Cylon identity has dealt a massive, stunning blow to all of them, most of all perhaps to Tigh, a man who poisoned his own wife when he discovered that she had consorted with the Cylons.

Plagued by haunting visions, Tigh maintains his stubborn belief in his own free will, and he tries to convince the other three secret Cylons that none of them will take up arms against the colonists. "Boomer thought the same thing, and then she shot the old man," Chief Tyrol tells him. "Boomer didn't know what she was!" Tigh barks at him. "We do!" Tigh's nail-chewing toughness has always been convincing, but how can he be so sure that he won't lose control? And how can he trust anything that he believes in, considering that all of his beliefs -- and his memories -- are merely illusions created by his Cylon programming?

As post-9/11 global relations have reflected too well, in a chaotic world of shifting alliances and conflicting belief systems, remaining firm in your conviction that you're on the side of the righteous can be the greatest challenge of all. But who would've thought that a TV remake of a goofy '70s space thriller could bring these fundamental geopolitical tensions to life so palpably? The sharpness of the dialogue, the dramatic weight of each scene, the relentlessly high stakes and the informed, multilayered approach to big questions combine to make "Battlestar Galactica" an electrifying drama series that far too many viewers are missing out on.

As these last 20 episodes unfold, will Starbuck persuade the colonists to follow her? Will Tigh and Tyrol and Anders and Foster stick to their beliefs, even though everything they've known to this point in their lives is a lie? Who is the last Cylon model to be revealed? And will Baltar live up to his selfless savior image, or will he once again play a part in the Cylon's plans to destroy humankind? Only one thing is for certain: Even if you're skeptical of science fiction, "Battlestar Galactica" will make a true believer out of you.