A truth teller who deserves justice 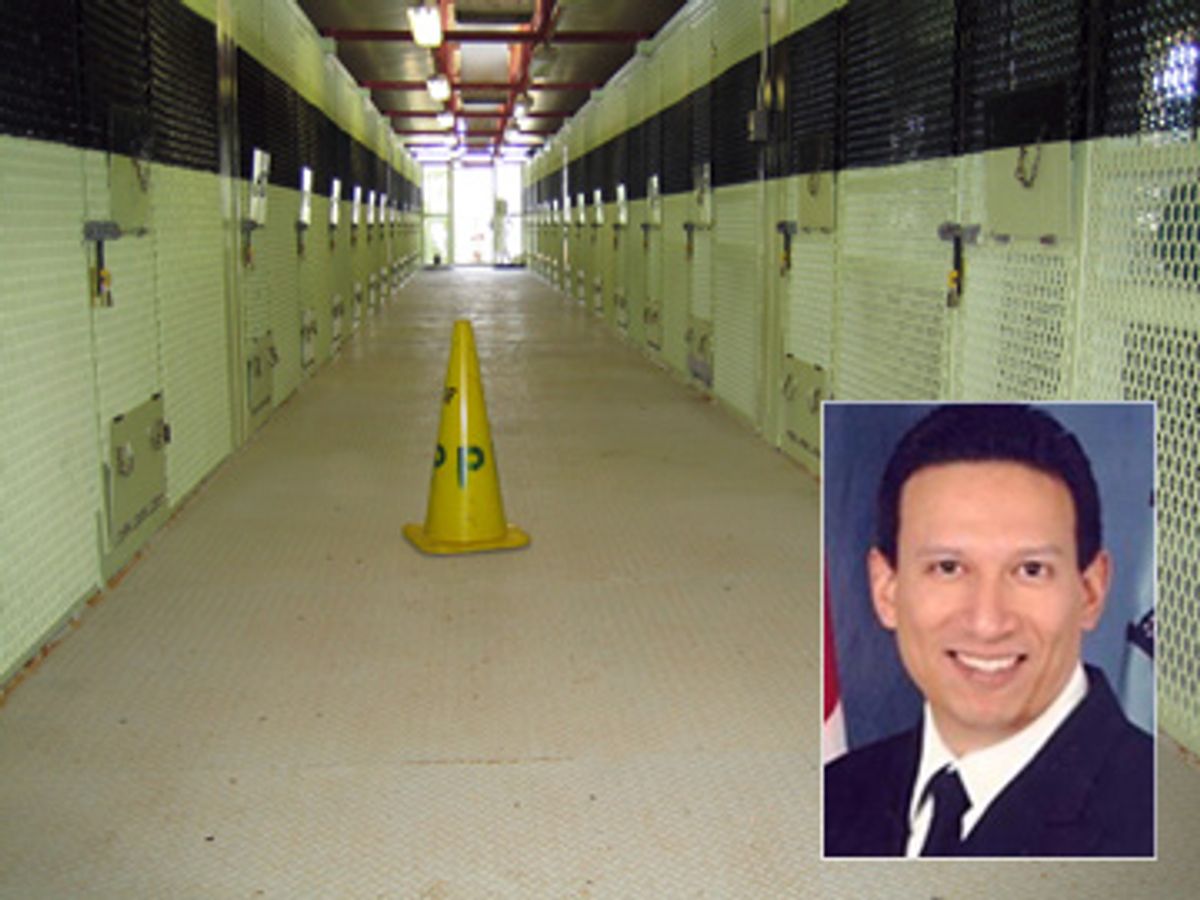 A former Navy officer named Matthew Diaz came to Washington, D.C., on Thursday, eating lunch just a few miles from the Pentagon and only steps from the White House -- those mighty institutions whose imperial will he defied by upholding the legal rights of prisoners at Guantánamo Bay, Cuba, where he served as a deputy legal counsel.

During the winter of 2005, sometime after he realized that the government was ignoring the landmark Supreme Court decision affording counsel and due process to every alleged terrorist in the military prison, Lt. Cmdr. Diaz printed out and mailed all of their names to civil rights attorneys in New York. That act ultimately resulted in his imprisonment in the Navy brig in Charleston, S.C., and the forfeiture of his military job and pension, and may yet lead to the permanent loss of his license to practice law.

But Diaz had come to the nation's capital on April 3 to be praised, not buried -- as this year's winner of the Ridenhour Prize for Truth-Telling, which is named after the late soldier and journalist who exposed the My Lai massacre in Vietnam 40 years ago this month. Sponsored by the Fertel Foundation and the Nation Institute (where I serve as director of a fund supporting investigative journalism), the Ridenhour prize recognizes the bravery of whistle-blowers who uphold American values regardless of personal risk.

The Diaz story is extraordinary, yet profoundly and typically American. Having risen from poverty and tragedy to professional status and prestige through his own hard work, he gambled everything on a principle, and lost.

He grew up in a broken family, moved frequently as a child and often survived on food stamps. His father, a hospital nurse convicted of the sensational serial murders of a dozen patients, ended up on death row in California's San Quentin prison when Matthew was a teenager. He soon dropped out of high school and joined the Army.

Whatever damage his early life inflicted on him, however, it did not destroy his intelligence and ambition, and eventually he obtained an associate's degree in law enforcement, a bachelor's in criminology and, after leaving the Army, a law degree while working for the Postal Service. He joined the Navy Judge Advocate General's Corps and was sent to Guantánamo during the summer of 2004, in part because of his outstanding service record at his previous posts. By then he had been promoted to lieutenant commander and was expecting to move up again soon. The superior officer who evaluated him before he left for Cuba had described him as "the consummate naval officer" and "a stellar leader of unquestionable integrity."

The problem was that within months after he arrived at the military prison, Diaz realized how the system there had been designed to conceal prisoner abuse and undermine human rights. Though Gitmo was no Abu Ghraib, he was nevertheless appalled by the conditions and the treatment of prisoners. Around the same time that his tour there began, the Supreme Court had ordered the Bush administration, in a case known as Rasul v. Bush, to provide habeas corpus rights to the Guantánamo prisoners. By the winter of 2005, more than six months after that order came down, neither the Pentagon nor the Justice Department had taken any action to obey it. Indeed, Diaz believed that they had no intention of obeying it at all.

Looking back, the method he chose to bring a measure of justice to Guantánamo seems more than slightly eccentric (and very likely to be detected). Reviewing legal documents in his office, he had seen the name of Barbara Olshansky, a civil liberties attorney at the Center for Constitutional Rights, who had requested the names of all the prisoners so that they could be provided counsel. There was no chance that she would receive a positive response from the Pentagon, but she did get a strange, oversize Valentine's Day card at her office in New York. When she opened the big red envelope, there was a funny card inside, plus a 39-page printout listing all the 550 Gitmo prisoners. She told a federal judge about this odd and suspicious delivery. The judge instructed Olshansky to turn everything over to the FBI, whose agents quickly tracked down Diaz. He was arrested and charged with five felony counts, including the disclosure of classified information that could aid America's foreign enemies.

The modest, soft-spoken Diaz hardly seems like the kind of man who would buck the rules or make trouble. What his story shows, once again, is that the durable old stereotype of the military man who yearns for authoritarian rule and brutality is largely false. Until his court-martial last year, Diaz served as a member of the Judge Advocate General's Corps, and like a number of his higher-ranking JAG superiors, he has proved that the most reliable defenders of the Constitution these days are not in the civilian ranks of government but among the senior military officers. It was the neoconservative law professors and political bureaucrats who authorized, encouraged and justified the worst depredations against human and constitutional rights, from Abu Ghraib to Gitmo. It was the men and women in uniform who warned against those policies and tried to amend them.

Although his offenses could have sent him to prison for many years, the military jury that convicted him on four of five counts last May sentenced Diaz to six months -- a sign, perhaps, that his peers understood what he did and why.

Since his release last autumn, he has received little publicity -- aside from a superb New York Times profile by Tim Golden -- and he is no longer granting interviews while awaiting appeal. He did speak briefly during the awards luncheon at the National Press Club, where he thanked his attorneys, his family, and the Catholic Worker Movement that sustained him when he left the brig, penniless and homeless. Over a career in the military that spanned two decades, Diaz said, he has won many citations and commendations, but the Ridenhour prize meant the most to him for recognizing "an act of conscience." He said that he had taken an oath, as a soldier and then a Navy officer, to uphold the Constitution. And he quoted the late Justice Louis Brandeis: "When the government becomes a lawbreaker, it breeds contempt for the law."

The lawless government of George W. Bush and Dick Cheney prompted Diaz to do something that Joe Margulies, the lawyer of record in Rasul v. Bush, called "illegal but an act of tremendous courage." The powerful men who bred contempt for the law may or may not ever be prosecuted, but if there is justice in the next administration, Matthew Diaz should be pardoned.