Hot for the Rolling Stones? Martin Scorsese's performance documentary of Mick, Keith and the gang may still leave you cold. 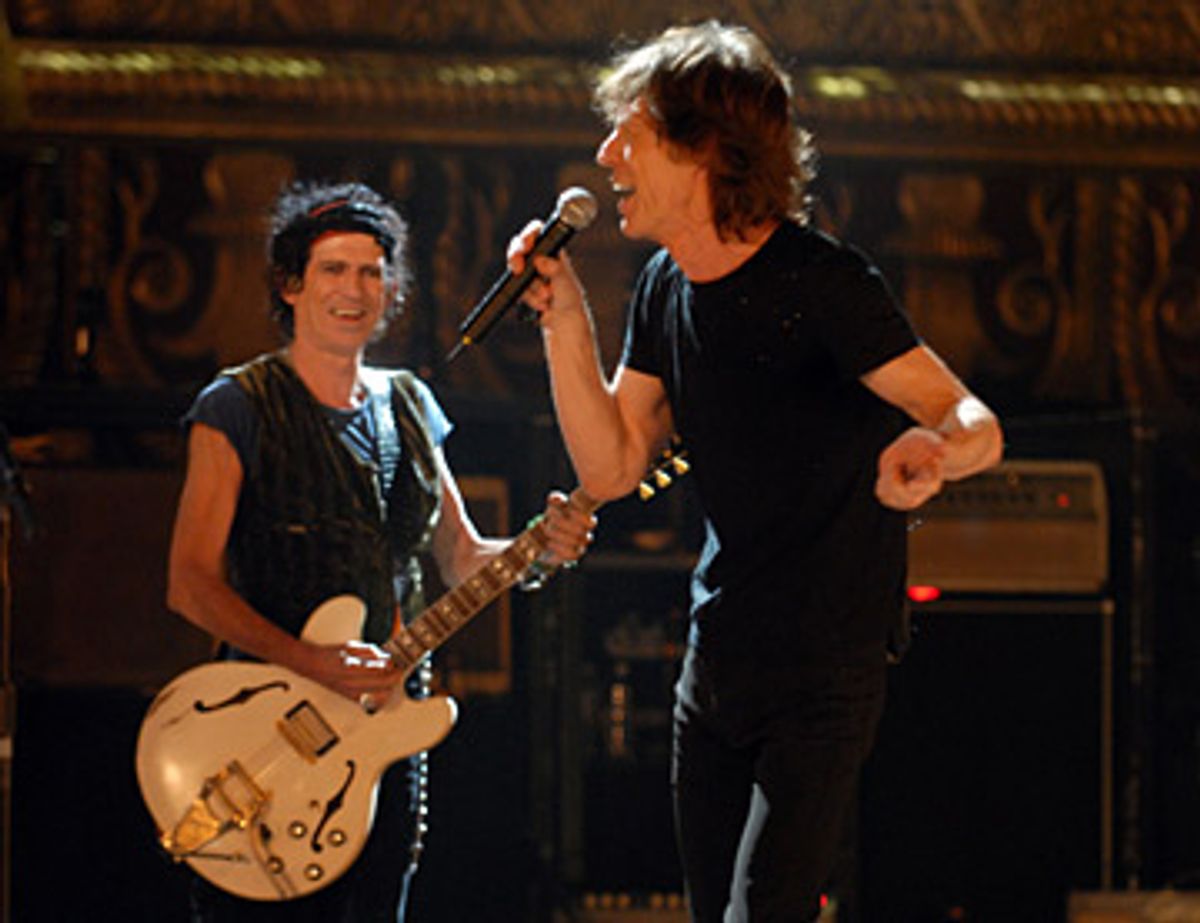 If Martin Scorsese's performance documentary "Shine a Light" were truly a reflection of the Rolling Stones' relevance today, the soundtrack CD would be available exclusively at Starbucks. As someone who loves the Stones, I find no joy in seeing what they've become -- not, just like all of us, older, but irrelevant.

Nearly everyone I know who has seen a recent Stones show comes back marveling at how much "energy" Mick Jagger has. "He just keeps going!" they say, as if "going" were all that mattered, in performance or in life. "Shine a Light" -- which Scorsese filmed over two nights in 2006 at New York's Beacon Theatre, with a team of cinematographers so large it might outnumber the brides at a Moonie wedding -- documents Jagger's energy, all right, and gives a sense of how the rest of the band orbits around him. But it's a late-night infomercial masquerading as a concert movie, more an advertisement for vitality than a picture of vitality itself. There's something self-congratulatory, preening, about both the performance and the filmmaking.

Scorsese opens the movie by suggesting the tensions that can flare up when great minds -- his and Jagger's, that is -- collide. We hear Jagger, a disembodied voice on the phone, expressing his concerns about the problems of filming a live performance, as Scorsese, either vaguely annoyed or feigning annoyance for the camera, responds by raising his caterpillar eyebrows. Scorsese wants lots of cameras and needs lots of lights; Jagger doesn't want anything to detract from the performance. Scorsese is anxious to see the set list so he can plan ahead; Jagger assures him it will be ready -- an hour or so before the band goes onstage. Will Judy and Mickey be able to pull their "Hey, kids, let's put on a show!" act together in time?

They do, and how. "Shine a Light" includes performances of some 932 numbers -- or so it seems -- from the Stones catalog, and Jagger goes through nearly as many costume changes. This is an elaborate show pretending to be an intimate one: Jagger had originally hoped to document a whole Stones tour, or at least one of the massive concerts that was part of that tour, held on the beach in Rio de Janeiro. Scorsese talked him and the band into filming a single concert in a smaller venue. In the production notes for the movie Scorsese says, "We did talk about making an official tour film but at a certain point, I thought making something more intimate would be more suited to me as a filmmaker and would also facilitate a more personal connection between the audience and the band."

At first I misread that last word as "brand," not "band," and didn't bat an eyelash. The Stones are a brand, and even performing in a smallish venue, they never let us forget it. I wonder how I'd feel if "Shine a Light" were only, say, 93 minutes long, instead of two hours, and if Scorsese hadn't taken the master-of-the-universe approach, enlisting all those A-team cinematographers (among them Robert Richardson, John Toll, Robert Elswit and Emmanuel Lubezki) to work more than 18 cameras. Would it seem trimmer, more muscular, instead of just exhausting? Scorsese used numerous "additional directors of photography" on his 1978 concert film "The Last Waltz," which documented the Band's farewell performance, and he seems to be trying to re-create that magic here. But "The Last Waltz" was celebratory and inclusive, while "Shine a Light" pulls off the paradoxical feat of being both showy and dull. With so many camera angles and crane shots to play with, Scorsese posits himself as all-seeing and all-knowing, but having so much variety of choice doesn't necessarily make the band seem more alive. The filmmaking tries to generate excitement; it doesn't capture it.

And no matter how ambivalent I feel about today's Rolling Stones, I'll concede that there is some excitement there. I always enjoy watching, and listening to, Keith Richards, who looks his age and all the better for it. Scorsese's multiple cameras at least manage to catch his aura of gorgeous, wrecked dignity. I always want more of Ronnie Wood and Charlie Watts -- Wood, the mischievous rapscallion who always looks as if he can't believe he has landed the greatest the job in the world; Watts, the class act who knows he has the greatest job in the world and has never let it go to his head.

But "Shine a Light" isn't their show. It belongs to Jagger, and he doesn't just clutch the audience to his bosom; he gnaws at us, like a rock 'n' roll version of Goya's "Saturn Devouring His Son." He's dancing as fast as he can, as much as he can; he's going to hell, and he's taking us with him; he's made a deal with the devil, à la Robert Johnson, and ooooh, isn't it scary? Jagger, in performance here, is all persona and no person: His rendering of "As Tears Go By" is clipped, precise, manicured, the words turned into a Hooked on Phonics exercise. When Jagger sang the song in 1965 (a different spin on the one Marianne Faithfull had given it a year earlier) he sang it as if he just didn't care, but his disinterest -- youthful, affected -- came off as insulation against suffering. In 2006, he sings it not as if he just doesn't care, but as if he has forgotten how to care.

Sometimes I hate the fact that Jagger sings as if he just doesn't give a damn; and sometimes I love the fact that he sings as if he just doesn't give a damn. At its best, rock 'n' roll (and all of art, for that matter) courts contradiction, not consonance. A few guest artists show up in "Shine a Light," and they make Jagger work a little harder by throwing him just slightly off his game: Christina Aguilera, a vision of tawdry elegance in an oversize tuxedo shirt, black tights and 5-inch stiletto heels, jolts Jagger out of his usual self-absorption as they duet on "Live With Me." Buddy Guy stares Jagger down on "Champagne & Reefer" -- and he has every right to.

Bill and Hillary Clinton take the stage to add, respectively, sax and backing vocals to "Tumbling Dice." OK, I made that up, but they are in attendance, along with Hillary's mom, and before the show the band comes out for a meet-and-greet. It's a kissy-face moment, except for the way Wood greets Hillary's mother: He's warm and personable without being unctuous, a scruffy rock 'n' roll gent. I don't always want my rock stars to be real human beings -- they're supposed to be larger than life -- but I do want them to give me something engaging to watch, something I can connect with. In "Shine a Light" Scorsese and Jagger posit themselves as two titans left to duke it out in a concert hall. Who will win? Who will survive? Both emerge, intact and clean instead of bloody and ragged, from the tedious, flashy wreckage. It's all the spontaneity of rock 'n' roll, fossilized.