Could the U.S. meet its energy needs with solar panels alone? 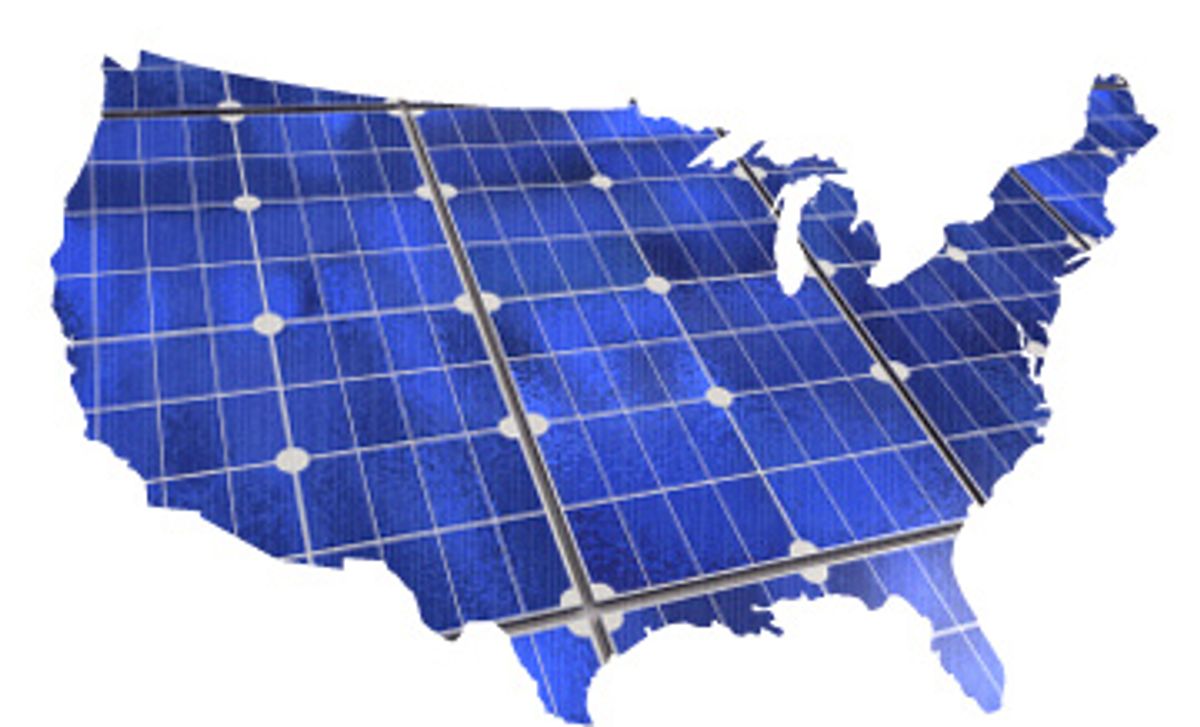 I've read in more than one place that 100 square miles of solar panels in the U.S. would meet all our energy needs. Wondering if you thought this was accurate and, if so, achievable?

Wouldn't it be great if we could completely switch from being a carbon-based economy to being a solar-based economy? The answer shouldn't be too hard to find but the conclusions might surprise you.

Solar photovoltaic modules or panels convert beams of energy from the sun -- photons -- into electrons, which we can then use as electricity. According to Dan Berger, senior project designer at SPG Solar, we receive about 6.5 kilowatt-hours (kWh) per square meter of solar energy per day, or 2,373 kWh per square meter per year. At 12 percent efficiency, the solar panels generate 285 kWh per year. The average American used 12,000 kWh in 2003, so each person would need around 42 square meters of solar panels (about 450 square feet).

At 12,000 kWh per capita, electricity demand is roughly 3.6 trillion kWh, or the equivalent of 1,200 coal-fired power plants running full-time. To generate 3.6 trillion kWh per year, we would need to install about 12.5 billion square meters of solar panels, or around 4,883 square miles. This is clearly a lot higher than the number that you had heard; about 70 x 70 miles.

If we assume we can find enough land for all of those solar panels, would a project of this scale be achievable? A typical solar panel contains between 800 and 1,570 grams of silicon (the high-grade material with which solar panels and computer chips are made) per square meter. If we assume an average of 1,185 grams, we would need 14,812,500 metric tons of solar-grade silicon. The projected annual production of silicon by 2012 is 144,000 metric tons, which means that it would take over 100 years to meet our needs of silicon to make all those solar panels! And that is if we assume a complete freeze on computer chip manufacture and solar panel demand in the rest of the world.

You might say that silicon supply rates will increase in the future, but so will the demand for electricity. Fortunately new solar photovoltaic technologies are coming onto the market, and use materials other that silicon, like cadmium telluride and copper indium gallium selenide.

But there is another problem: The sun doesn't shine all day. To get around this problem, we could build a global electricity grid and, since the sun is always shining somewhere, we should be able to get enough electricity. But this sort of dream project would require a very large investment and may not be technically -- or politically -- feasible for many years to come. For now, a sensible solution would be to store surplus solar energy generated during the day, and use it for off-peak hours (nighttime). That could be done by pumping water into uphill reservoirs, so that the energy can later be retrieved through hydroelectric turbines, as in a hydroelectric dam.

While it is clear that solar photovoltaic is an important component in the basket of renewable energy technologies, it can't be the only one. Wind, geothermal and wave power will play an increasing role in meeting our needs as well. Another option would be to pair solar energy with wind and biogas (natural gas produced by the microbial decomposition of agricultural waste). In fact, a recent study in Europe showed that Germany has sufficient wind, solar and biogas resources to feed that nation's electricity needs, even when the wind is not blowing or the sun is not shining. By diversifying our renewable energy technologies we ensure a continuous supply of clean energy.