How "Slaughterhouse Five" was born 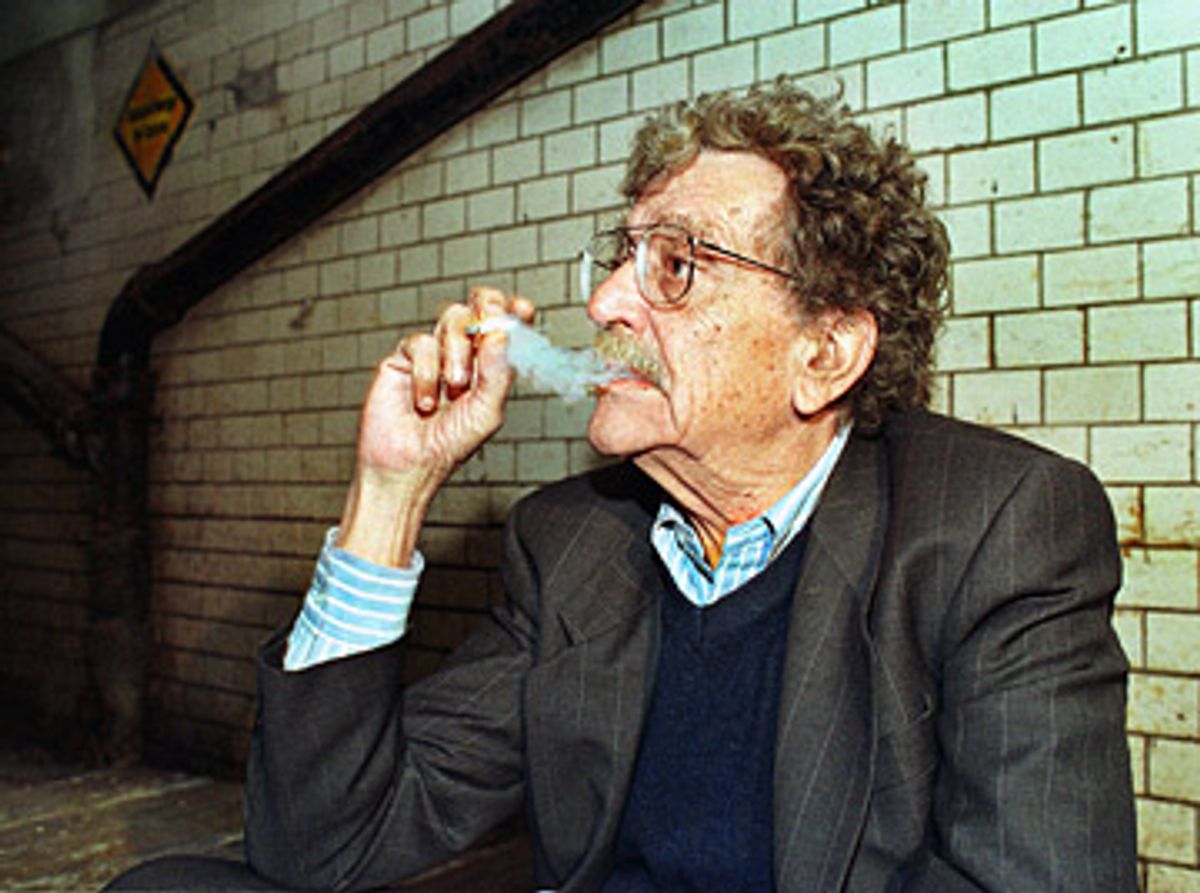 On May 29, 1945, Pfc. Kurt Vonnegut Jr. sat down at a typewriter in the Red Cross Club of the POW Repatriation Camp in Le Havre, France, and wrote his family a letter. "I'm told that you were probably never informed that I was anything other than 'missing in action,'" he began. "That leaves me a lot of explaining to do."

The 22-year-old proceeds to detail his capture by the Germans, his imprisonment in Dresden and his subsequent liberation in a mordant brand of prose that would eventually become his literary trademark. A typical passage:

On about February 14th the Americans came over, followed by the R.A.F. [T]heir combined labors killed 250,000 [sic] people in 24 hours and destroyed all of Dresden -- possibly the world's most beautiful city. But not me.

After that we were put to work carrying corpses from Air-Raid shelters; women, children, old men; dead from concussion, fire or suffocation. Civilians cursed us and threw rocks as we carried bodies to huge funeral pyres in the city.

Although the young private overstated the number killed during the bombings -- current estimates run between 25,000 and 40,00 -- his correspondence, reproduced in its original form, is the most fascinating document in Vonnegut's new posthumous collection, "Armageddon in Retrospect." The letter -- both its candor and its smart-alecky tone -- helps us understand how a Midwestern ne'er-do-well became the foremost literary pacifist of the 20th century.

But the entire book is striking for the light it sheds on Vonnegut's early years as a fiction writer, the era in which he was a struggling short story writer still casting about for a way to tell his Dresden story.

The majority of the pieces compiled here -- 10 of 13 -- are unpublished shorts, written in the decade after his return from war. There are a few experiments in science fiction, but most are set in Dresden and laden with tragic ironies that convey (rather too ardently) the horrors of war. We can assume, for instance, that the orphaned boy in "Happy Birthday, 1951" will ultimately reject the efforts of his grandfatherly guardian to shield him from the violence of war, just as the G.I. in "Spoils" will be haunted by the knowledge that the rabbit he foraged for dinner belonged to a crippled German boy.

The question that haunts this new book is how Vonnegut himself managed to break free from such earnest realism to produce his eventual masterpiece about Dresden, "Slaughterhouse Five."

The short answer is that Vonnegut had the good sense to stop trying to sound like a dutiful young writer. But it's a bit more complicated than that, as matters of artistic growth tend to be. Upon returning from the war, Vonnegut got married, enrolled in the master's program in anthropology at the University of Chicago, and took a part-time job as a crime reporter. Two years later, with his thesis freshly rejected, Vonnegut moved to Schenectady, N.Y., to take a job as a publicist with General Electric at the urging of his older brother, a GE scientist.

Here, he began working as a writer in earnest. In 1951, he quit his day job and took up fiction full time. He was able to place several short stories in magazines, but the project that showed the most promise was a science fiction novel called "Player Piano." (If his schedules are to be believed, he completed the book in a matter of months.) Rather than revisiting the dark events of his past, Vonnegut vented his anxieties by envisioning a dystopian future. The genre enjoyed one other marked advantage: It was salable. This was no small matter. By the time Scribner's published "Player Piano," in 1952, Vonnegut had a wife and two babies to support.

His more traditional short stories about the war, by contrast, often went unpublished. Vonnegut's papers reveal that he plowed through at least six drafts of the "Commandant's Desk," more than 200 pages of revisions. The piece, which appears in the new collection, remained unpublished during Vonnegut's lifetime.

So it might be argued that Vonnegut essentially couldn't afford to write about Dresden until he had become more financially secure. In fact, Vonnegut had been trying to write about the atrocity since his return from the war. Not just in short stories -- many of which contain episodes that would later crop up in "Slaughterhouse" -- but in a series of drafts of that novel, at least three of which are in the Vonnegut archive at the University of Indiana at Bloomington.

His earliest draft takes a conventional approach. His second version begins with a salvo that resembles both the voice of the 22-year-old private who wrote his family from France and the outraged moralist he would become:

I used to pretend, even to myself, that I was deeply sorry about Dresden, tinkered with the idea of writing a book about the massacre with neatly underplayed indignation. But these things happen and there is no stopping them, so the hell with them.

But elsewhere in this draft -- perhaps to compensate for such glib nihilism -- his prose strays into the deep corn. We get lots of zowies and whiz-bangs. By the third draft, he has hit upon the formula that will allow him to write about Dresden without evasion: an exuberant amalgam of science fiction and personal confession.

"I would hate to tell you what this lousy little book cost me in money and anxiety and time," he writes on Page 2. "When I got home from the Second World War 23 years ago, I thought it would be easy for me to write about the destruction of Dresden, since all I would have to do would be to report what I had seen. And I thought, too, that it would be a masterpiece or at least make me a lot of money, since the subject was so big." This is what makes "Armageddon in Retrospect" such a gripping read: The volume demonstrates Vonnegut's mind-boggling evolution as a writer, the manner in which he learned how to cloak his rage in hilarity, to cop to his immense despair without surrendering to it.

The most assured piece in the new collection is a brief, undated essay called "Wailing Shall Be in All Streets." Vonnegut is writing about Dresden, naturally. One need only replace the noun "Germany" with "Iraq," however, to discern the unique prophetic role Vonnegut continues to play in our literary culture:

But the "Get Tough America" policy, the spirit of revenge, the approbation of all destruction and killing, has earned us a name for obscene brutality, and cost the World the possibility of Germany becoming a peaceful and intellectually fruitful nation in anything but the most remote future.

The essay's closing paragraph is also a forceful reminder that while Vonnegut has died, his essential mission as an artist -- to arouse the mercy of his readers -- remains unfinished. He describes the warm reception he received from Russian soldiers as America's last "good war" drew to a close. "We accepted their congratulations with good grace and proper modesty," he notes, "but I felt then as I feel now, that I would have given my life to save Dresden for the World's generations to come. That is how everyone should feel about every city on Earth."