What we remember most about the '60s TV classic "The Mod Squad" is those groovy clothes. What we've forgotten is how sweet it was. 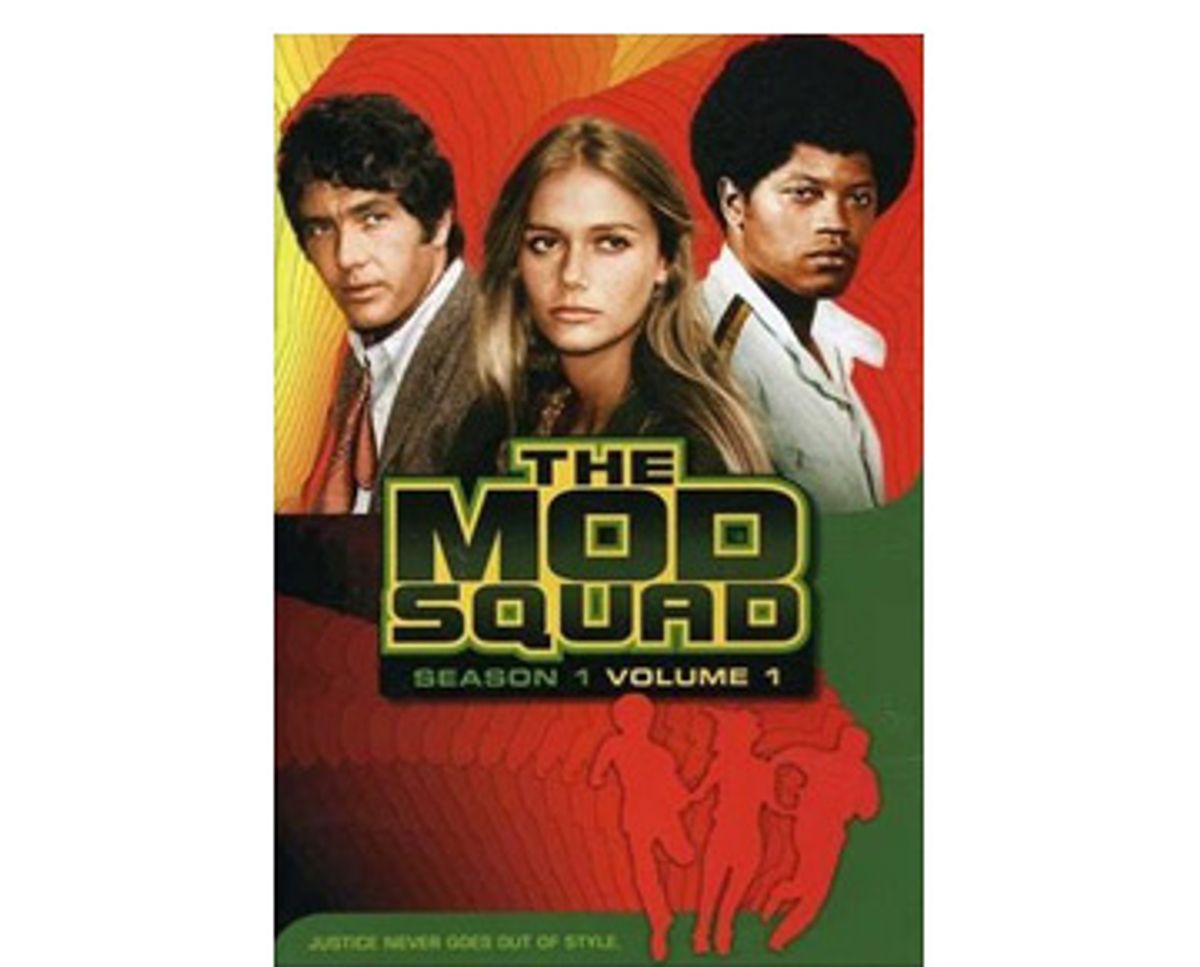 "The Mod Squad" first aired in the fall of 1968, and you can bet your bippy that its executive producers, Aaron Spelling and Danny Thomas(!), were hoping to capture the youth market, to tap some element of counterculture hipness and turn it into advertising dollars. But watching the first half-season's worth of "Mod Squad" episodes on DVD (the second half is also available), I was struck most not by the ridiculousness of some of the "mod" dialogue (though much of it is pretty silly) or by the Jimi Hendrix-lite neckerchiefs and flared pants worn by the guys (which don't look all that strange today, at least if you live just a neighborhood or two away from Williamsburg, Brooklyn, as I do).

What struck me most is how good-natured and gentle-spirited the show is, and how it strives for at least some degree of open-mindedness, even though it made its debut at a time when the generation gap was at its widest. The three principals are Pete Cochran (Michael Cole), the rich kid who had to get away from his family; Julie Barnes (Peggy Lipton), the lithe, leggy blond with a troubled, and only vaguely outlined, past; and Linc Hayes (Clarence Williams III), an African-American from the inner city who knew only poverty and crime growing up.

These three have been saved from certain degeneracy by a tough cop with a softie's heart, Captain Greer (Tige Andrews). After plucking them off the streets of L.A. for committing various crimes, Greer has made a deal with them: Instead of doing jail time, they can work on the right side of the law, infiltrating the world of the young, a world of discotheques, free love and LSD. The trio's supposed goal is to solve crimes, of course, but they also feel a heavy responsibility to prevent all those kids out there from getting in trouble in the first place. They want to save the world, one hapless flower child at a time.

That's not to say that nearly every episode doesn't include an excuse to put Lipton's Julie into some sort of skimpy outfit (one of the best being a striped kitty-cat suit, complete with pointed kitten ears, when she goes undercover at a nightclub). But even though the show's sexual politics are predictably retrograde -- Linc and Pete often have to show up, at the last possible minute, to rescue their colleague from some baddie who's got his big paws all over her -- the show at least reaches toward some sexually egalitarian ideal. When Captain Greer wants to send Julie out to snare a serial killer (his gimmick is to strangle women with brightly colored silk scarves), Linc and Pete protest -- it's painful for them to think of her being endangered. But Julie is too game to turn the assignment down, and although the two end up following her protectively, the idea is that the three of them all look after one another out of affection and duty. Gender is a factor in "Mod Squad," but then, so are race and class. The show's tagline may have been "One white, one black, one blonde," but the point of the show, maybe all the more touching for being so obvious, is that these three young cops are striving to get past the stereotypes the "establishment" has saddled them with.

The dialogue is often endearingly absurd: "There's no way to divide three and come up even," Pete says, when Linc, facing a problem from his past, tries to shut his friends out. And the acting is sometimes, though not always, worse. Cole is the stiffest, un-grooviest of the three, although he's also the one saddled with the silliest plot devices. As the former rich kid, he's often called upon to encounter some troubled old flame who makes him all dewy-eyed (and who causes Julie, who obviously has the hots for him, to look on with mild but undisguised jealousy).

But Lipton -- with that unreal head of hair, hanging about her shoulders like a sheet of silk -- is such a low-key presence that her acting doesn't come off as good or bad. She's enjoyable to watch because her look so perfectly captures an era, and also reconnects some of us with nostalgic desire: In Middle America, circa 1968, there were lots of little girls who wanted to look like her, even though we knew we didn't have a hope in hell. That didn't mean our lives were ruined, or that we were doomed to face a lifetime of striving for unachievable goals (or at least just straight hair). Maybe what we were learning was that it's no sin to appreciate beauty, and it's natural to wish for a bit of it ourselves.

And Williams -- who has gone on to have a busy career, most recently in an uncredited performance in Ridley Scott's "American Gangster" -- is generally terrific, even when he's delivering all that corny, faux-hip dialogue. When Linc gives a stern talking-to to a young woman who's headed for trouble, and later says to the others that he wishes someone had talked to him that way, Williams is so alive to the moment that he keeps the line from sounding like a cliché.

"The Mod Squad" may have been designed to cash in on the counterculture "trend." But it really seems to have been based on a formula that had been around since the time of "Rebel Without a Cause": The older generation -- which, in the late 1960s, would have meant anyone over 30 -- had to recognize that young people are people, too, with their own problems and concerns, and that if you just approach them with a little understanding and sympathy, you'll learn that they're not so bad after all. That message is the antithesis of Doc's squaresville "You kids! You make the world dirty!" speech in "West Side Story." The idea behind "The Mod Squad," delivered clumsily but earnestly, is something else altogether: It wants to reassure us that the kids are all right.