Sizing up Petraeus on Iraq

The top U.S. general gave Congress an upbeat assessment of the war Tuesday. Here's the reality behind the rhetoric. 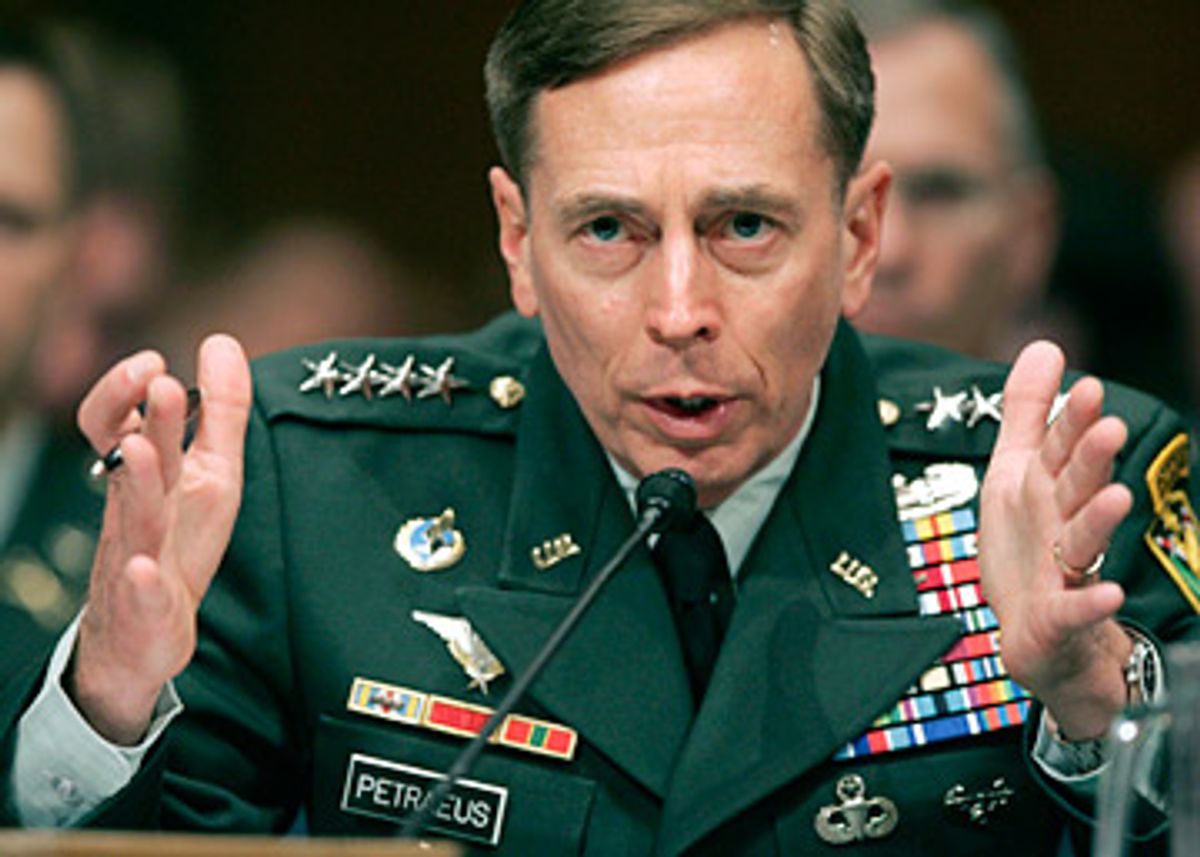 Gen. David Petraeus, the commander of the coalition forces in Iraq, and Ryan Crocker, U.S. ambassador to Iraq, testified before two Senate committees on Tuesday regarding the state of the war. Salon takes a look at their various claims and admissions, boiling down the rhetoric and what we might expect as the war moves into its sixth year.

Claim: The surge is working.

Petraeus: "Though Iraq obviously remains a violent country, we do see progress in the security arena."

Crocker: "One conclusion I draw from these signs of progress is that the strategy that began with the surge is working."

There is truth to this, depending on how "real progress" is defined. Petraeus once again came to Congress, as he did last September, armed with a dizzying array of graphs to make his point. The multicolored charts show that "security incidents" are down -- but only to mid-2005 levels. Civilian deaths are down, too -- but only to February 2006 levels. Most security experts agree there is still a civil war going on in Iraq.

There is no evidence to indicate that Petraeus spoke inaccurately. So, the real question to help guide U.S. strategy and tactics (including troop levels) is: Why is violence relatively down?

In answering that question, even Petraeus and Crocker didn't much emphasize the increased number of U.S. troops in Iraq. Instead, they talked much more about cutting deals. In the so-called Sunni awakening that started before the surge in late 2006, substantial Sunni communities have agreed to a cease-fire with U.S. forces and to fight against al-Qaida in Iraq. Meanwhile, Shiite leader Muqtada al-Sadr's decision in August 2007 to declare a cease-fire is widely regarded as being a substantial factor in the reduced violence in Iraq.

Meanwhile in some areas, including Baghdad, neighborhoods have been partitioned along sectarian lines -- at the barrel of a gun. Shiites aren't killing as many Sunnis in Baghdad, for example, because many neighborhoods don't have any Sunnis anymore. They have been forced out, and their homes have been taken over by Shiites. As Petraeus put it, "Some of this decrease [in violence] is, to be sure, due to sectarian hardening of certain Baghdad neighborhoods."

Claim: The surge may ultimately succeed; we've kept civil war to a simmer in Iraq, and there is real national political reconciliation happening.

Crocker: "In the last several months ... Iraq's Parliament has formulated, debated vigorously, and in many cases passed legislation dealing with vital issues of reconciliation and nation building."

This is also true, on paper. The most often cited example of this progress is the recent passage by the Iraqi Parliament of three laws: allowing members of Saddam Hussein's Baath party back into government, approving local and regional elections for this October, and granting amnesty in the cases of tens of thousands of prisoners in Iraqi and U.S. custody.

But it is unclear the extent to which these laws are, or will ever be, implemented in Iraq. As a report from the United States Institute of Peace this month says, "implementation is uneven" of these measures.

Admission: Despite progress, the whole thing could go into the commode at any moment.

Petraeus: "The progress made [on security] since last spring is fragile and reversible."

Crocker: "These gains are fragile, and they are reversible."

Give 'em credit for being honest here. As the recent explosion of intra-Shiite fighting in the southern city of Basra illustrated so painfully, the real reason there has been some progress in Iraq is that the members of various Iraqi groups have agreed to shoot at each other and U.S. troops less often -- at least for now.

But they can decide otherwise at any time. If the various factions -- including Muqtada al-Sadr and his powerful Mahdi Army -- decide that it is "game on," again, the roughly 160,000 American troops will be caught in the crossfire.

Claim: It is still possible to turn Iraq into a shining beacon of democracy in the Middle East.

Crocker: "Iraq has the potential to develop into a stable, secure, multiethnic, multisectarian democracy under the rule of law."

The number of credible national security experts out there who believe that Iraq is going to transform into a Jeffersonian democracy anytime soon can probably be counted on one hand. With room to spare.

As mentioned above, perhaps the most hopeful things in this whole picture are the various cease-fires and handshake agreements among various sects. This is the "bottom-up reconciliation" you hear so much about from the White House these days. But given the deep sectarian fault lines remaining in Iraq, many experts wonder whether we shouldn't be using the bottom-up progress to foster something less than a shining beacon of democracy in the Middle East and more of a partitioned, heavily policed situation, as was done in the Balkans. This might be a more realistic goal than trying to make Iraq into post-World War II Germany.

Claim: A key positive development is the number of Iraqis (mainly Sunnis) who are volunteering for U.S.-funded local security units called the "Sons of Iraq."

Petraeus: "The emergence of Iraqi volunteers helping to secure their local communities has been an important development."

We are paying Iraqis not to shoot so much. There are now more than 91,000 Sons of Iraq funded by U.S. taxpayers. The vast majority are Sunnis, including former insurgents who fought against U.S. troops. But there is little reason to believe they feel allegiance to a central government led by a Shiite, Prime Minister Nouri al-Maliki. Only 21,000 of them have been "transitioned" into Iraqi government security forces. While the creation of the Sons of Iraq has arguably resulted in some decrease in violence, this would seem to be one of the security gains that could be "reversible" at the drop of a hat.

Claim: Iran's influence in Iraq is really bad; the Iranians are arming "special groups," or rogue militias that are a threat to the Iraqi central government.

Petraeus: "Together with the Iraqi security forces, we have also focused on the special groups. These elements are funded, trained, armed and directed by Iran's Qods force, with help from Lebanese Hezbollah."

Crocker: "Iran continues to undermine the efforts of the Iraqi government to establish a stable, secure state through the authority and training of criminal militia elements engaged in violence against Iraqi security forces, Coalition forces and Iraqi civilians."

Iranian meddling in Iraq is one of the murkiest and most difficult parts of the picture to assess. The United States has made various claims about direct Iranian involvement in military activity in Iraq, although evidence of such involvement has been unclear. But there can be no doubt about Iranian influence in Iraq more broadly: For example, the Iranians, not the Americans, reportedly brokered the recent cease-fire in Basra. And the Iranians have significant ties to the Islamic Supreme Council of Iraq, led by Shiite cleric Abdul Aziz al-Hakim, a crucial member of the coalition keeping Maliki in power. As Crocker admitted on Tuesday, "Iran has a dialogue with everyone in the Shiite community."

Claim: "Al-Qaida in Iraq" is also pretty bad. But we are kicking their ass in Iraq, and by extension, Osama bin Laden's.

Petraeus: "The threat posed by AQI [al-Qaida in Iraq] -- while still lethal and substantial -- has been reduced significantly ... Osama bin Laden and Ayman al-Zawahiri have consistently advocated exploiting the situation in Iraq, and we have also seen AQI involved in destabilizing activities in the wider Mideast region."

The gains in this respect have been trumpeted as one of the great successes of the past year in Iraq. By some accounts, al-Qaida in Iraq -- or what the Bush administration, at least, labels as some sort of organization there linked with Osama bin Laden's -- is on its heels in Iraq. This is mostly because the group or groups of militants overplayed their hand with extreme violence against Iraqis, and Sunnis, particularly in western Iraq, turned against them. Nevertheless, the connection between "AQI" and Osama bin Laden's terrorist organization is considered dubious by experts, who warn not to think of AQI and al-Qaida as the same thing.

Claim: The recent battle of Basra, in which government forces led by Maliki, a Shiite, attacked militias affiliated with Muqtada al-Sadr, another Shiite, was a positive development. Maliki was cracking down on criminals, including Shiites.

Crocker: "When viewed with a broader lens, the Iraqi decision to combat these groups in Basra has major significance. First, a Shiite majority government, led by Prime Minister Maliki, has demonstrated its commitment to taking on criminals and extremists regardless of sectarian identity. Second, Iraqi security forces led these operations in Basra and in towns and cities throughout the south."

Some observers think Maliki dispatched Iraqi troops to Basra not to enforce law and order, but to weaken his political adversary, Sadr, before elections in October. Maliki only gave the Americans a heads-up about the operation just before it started.

Tactical success was another matter. The Iraqi units arrived in Basra driving armored vehicles too fat to fit into some of Basra's skinny alleys. More than 1,000 Iraqi policemen and soldiers sent there by Maliki refused to fight, including at least two senior field commanders in the battle. The Bush administration had, at first, called the offensive a "defining moment" that would prove the Iraqi military's mettle. And Maliki had, at first, vowed to see it through to victory. But it was, at best, a stalemate.

Claim: The Iraqis have redesigned their flag -- which is a big deal because it suggests that Iraq is pulling together as a nation and that things will turn out well.

Crocker: "In January, a vote by the Council of Representatives to change the design of the Iraqi flag means the flag now flies in all parts of the country for the first time in years."

So, if the nation has pulled together, why are we still there again?

Admission: This summer, there will be no further reduction of U.S. troops in Iraq beyond the ongoing drawdown; the occupation will flatten out at pre-surge levels, around 140,000 troops.

Petraeus: "I recommended to my chain of command that we continue the drawdown of the surge combat forces and that, upon the withdrawal of the last surge brigade combat team in July, we undertake a 45-day period of consolidation and evaluation. At the end of that period, we will commence a process of assessment to examine the conditions on the ground and, over time, determine when we can make recommendations for further reductions."

In essence: With the occupation after this summer holding steady at roughly 140,000 U.S. troops, the Iraq war will now be, definitively, the next American president's problem.