No, Hillary Clinton shouldn't be winning

Sean Wilentz spun a fantasy in his Salon piece about Clinton's electability. In the real world, it's Barack Obama who's more electable. 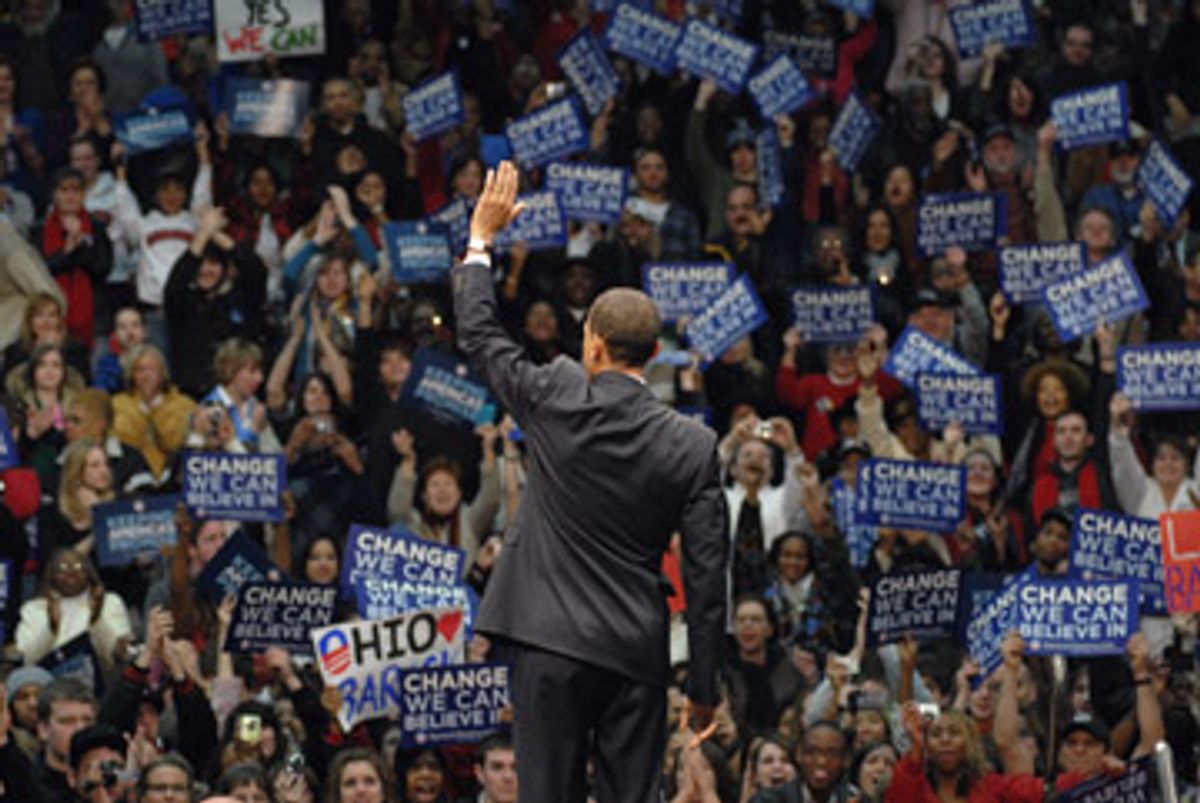 Hillary Rodham Clinton has won fewer votes this spring in contested primaries than Barack Obama. She has persuaded fewer of her supporters to turn out for caucuses. She has won fewer pledged delegates. Yet Sean Wilentz writes that she "should be winning." And in response I say: "Huh?"

It turns out that when Sean Wilentz says that Hillary Clinton "should be winning" the race for the Democratic presidential nomination, what he means is that if all the Democratic caucuses and primaries had been winner-take-all, then "Clinton would now have 1,743 pledged delegates to Obama's 1,257."

Sean Wilentz is a Yankees fan. I am a Red Sox fan. Perhaps Sean Wilentz could write that the American League championship should go to the team with the most hits instead of the most wins, which would have made the Yankees rather than the Red Sox the real champions last year. After all, isn't the real point of baseball to hit the ball and get on base? That's why it's called baseball, and not run-ball or win-ball, right? I would not find that argument convincing. Wilentz's winner-take-all gambit is a talking point, not an argument: "If my grandmother had wheels, she would be a bus" is rarely a persuasive line of reasoning. If the rules for winning delegates and the nomination had been different, the candidates would have run different campaigns and put their resources into different places and different proportions.

Is there another argument out there, one based on the way things actually work in 2008? Does Sean Wilentz have an argument that, say, a critical mass of superdelegates might take as a reason that they should support Hillary Clinton over Barack Obama for the Democratic presidential nomination? Reading through his piece, I see unsupported allegations of cheating, references to "blatantly anti-democratic maneuvers" by the Obama campaign, and "the same kind of tactics as George Bush's camp used in Florida in 2000." But I find two, and only two, things that I would take to be real arguments. They are interrelated:

1) "Clinton has won the popular vote in all ... large states [except Illinois]." Wilentz claims that Clinton is the stronger candidate because she would deliver big states in the fall.

2) "The latest state-by-state figures ... indicate that if the election were held today, Clinton would defeat McCain ... because of her lead in big, electoral-vote-rich states such as Florida, Ohio and Pennsylvania -- and McCain would beat Obama."

Argument 1 is simply wrong. Small states have electoral votes too -- more electoral votes per capita, in fact, than large states. A good many large states are not in play in any reasonable election: The Democrat will win New York and California, and the Republican will win Texas and Georgia, unless it is an absolute blowout landslide.

Argument 2, by contrast, is interesting, since it posits that Clinton is the stronger candidate against the GOP nominee in specific swing-state matchups. If true, this could provide a good reason for public-spirited superdelegates to support Hillary Rodham Clinton over Barack Obama at the Democratic National Convention. Wilentz cites "DaveOinSF," writing on March 20 at MyDD, who updated state-by-state polls and found that Hillary Clinton does better than Barack Obama against John McCain in 13 swing states, meaning the 13 states where the margin between the two major-party candidates in the last two presidential elections was closest to the nationwide split. In five states with a total of 42 electoral votes -- Michigan, New Hampshire, Iowa, Nevada and Colorado, Obama beats McCain and Clinton does not. In four states with a total of 78 electoral votes -- Pennsylvania, Minnesota, Florida and Ohio -- Clinton beats McCain and Obama does not. Both Democrats lead McCain in three states with 22 electoral votes, Oregon, Wisconsin and New Mexico. McCain beats both Democrats in Missouri, which has 11 electoral votes.

I take this to be an argument about "electability," meaning an assertion about which candidate has the greatest chance of capturing the electoral votes of the true swing states. I take Wilentz to be saying that Barack Obama is less electable -- that there is something about Barack Obama and his campaign that makes him less likely to win a majority of electoral votes in a close election this November.

Unfortunately for all of us, Wilentz doesn't develop this argument. This means that I have to do Sean Wilentz's job as well as my own.

The Argument Sean Wilentz Should Have Made
So: Consider the 153 electoral votes in these 13 swing states -- Michigan, Pennsylvania, Minnesota, Oregon, Wisconsin, New Hampshire, Iowa, New Mexico, Florida, Ohio, Nevada, Missouri and Colorado. What reasons do we have to think that one or the other of the Democratic candidates would have an easier time capturing the bulk of these crucial electoral votes?

The best -- what I think is actually the only -- "electability" argument for Hillary Clinton was made by Josh Marshall of Talking Points Memo in a commentary on posts by bloggers David Sirota and Brendan Nyhan. Marshall wrote that he believes that states with a midsize African-American population are especially difficult for Obama to win:

Only a quarter of the nation lives in states where the African-American population is in "the high single digits" -- that is, where "racialized voting kicks in" but where the African-American population is not large enough "to make up for and often overcome the increased white resistance to voting for Obama." But 96 out of the 153 swing electoral votes belong to five key states where voting is racially polarized, and where the black population is not big enough for an increased black turnout to offset the white vote. The states, in order of black population by percentage, are Michigan and Florida (14 percent); Missouri and Ohio (11 percent); and Pennsylvania (10 percent).

The argument that Wilentz should have made is that this spring's primary results show that white reluctance to vote for an African-American candidate could be a real and important factor this November -- and potentially key in these five states, all of them crucial to Democratic hopes. Superdelegates should therefore make a coldblooded calculation to cater to the prejudices of the American electorate in swing states by choosing Clinton over Obama.

Is this argument true? Is it supported by statistical fact? As best as I can tell, no.

But would this same logic apply to the general election? I believe that it would. First of all, there is no sign that states with demographic compositions like the key five -- Pennsylvania, Ohio, Florida, Michigan and Missouri -- are necessarily hard terrain for Democratic politicians. Consider this graph, which is constructed to show the correlation between percentage of black population and the Democratic vote in the 50 states and the District of Columbia.

With the exception of Washington, D.C. -- that blue dot way off in the upper-right corner, which has both a black majority and a population that votes 80 percent Democratic -- the linear relationship between African-American population share and Democratic vote share is flat. There is some evidence, albeit weak, that states with demographics like the key five are the most hospitable to Democrats. Democratic presidential candidates do fine in states in the middle of the black population range, like New York. It's mostly the states with the lowest and the highest African-American shares -- both Idaho, less than 1 percent black, and Mississippi, nearly 40 percent black, are GOP fiefdoms -- that are the least hospitable to Democrats.

Second, wherever Barack Obama has campaigned this spring, the results in terms of voter turnout have been astonishing and phenomenal. There are two ways to win a general election: mobilizing and achieving a high turnout from your issue and demographic base, and persuading independent swing voters to come to your side. Barack Obama has shown a remarkable power to get independents who do not usually turn out for the Democratic primary to show up and vote for him. And he has shown a remarkable power to turn out his base. Both of these would have to vanish mysteriously in the general election before Obama could be called less "electable."

Thus my judgment is that the argument that superdelegates should support Hillary Clinton because Barack Obama is not very "electable" falls to the ground of its own weight.

I think that Wilentz agrees with me. He talks about a winner-take-all system that doesn't exist, but spends little time engaging the real-world issue of electability. And that is: Which Democratic candidate, Obama or Clinton, has a better chance of carrying Michigan, Pennsylvania, Minnesota, Oregon, Wisconsin, New Hampshire, Iowa, New Mexico, Florida, Ohio, Nevada, Missouri and Colorado against John McCain in November?

And, alas, the arguments that Clinton would fare worse in those states, and that she is less electable generally than Obama, are numerous and distressingly powerful:

Now, none of these are Hillary Rodham Clinton's fault -- well, except for that last one, which is her fault, or perhaps Mark Penn's. None of these are fair. But they do make me believe that flinty-eyed Democratic superdelegates making coldblooded calculations about the national interest are making a better bet on the future if they decide to support Barack Obama.