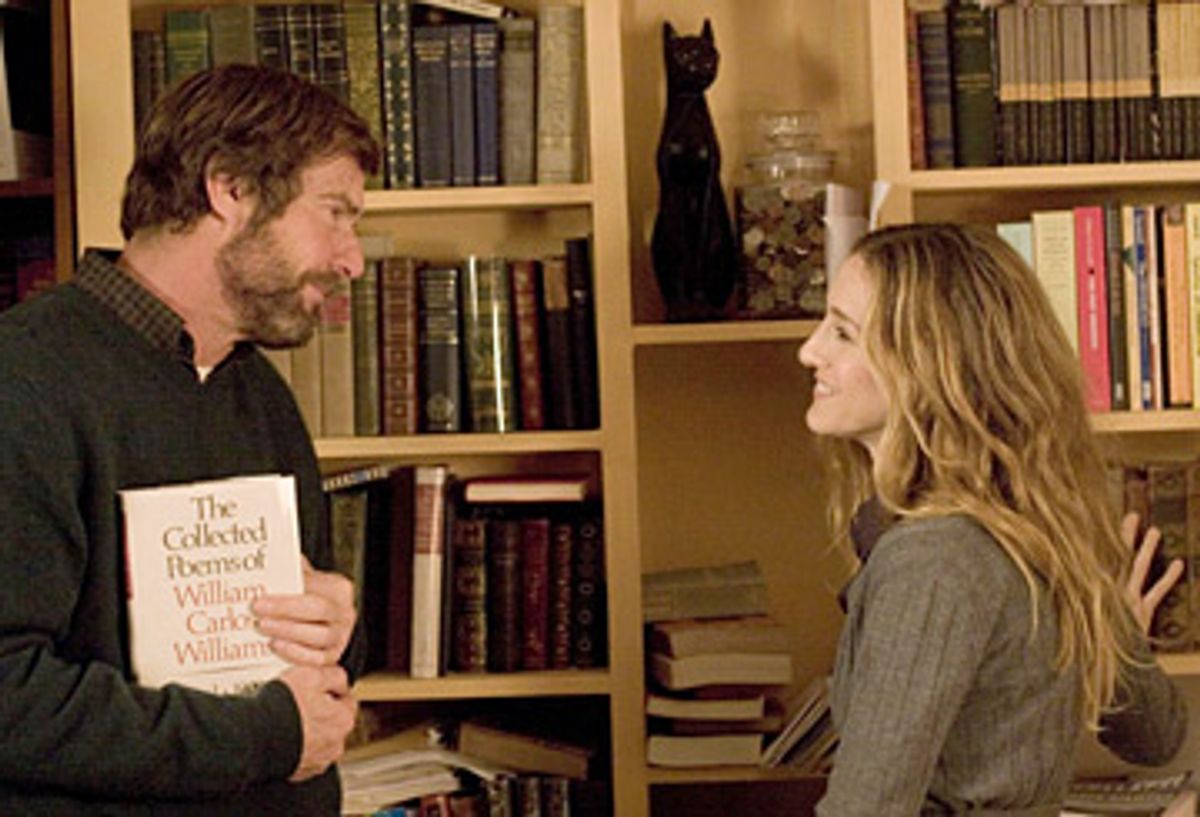 Now that so many American mainstream movies seem to have been made by committees of robots, there's more pressure on indie -- and even just semi-indie -- filmmakers than ever before. We look to smaller pictures for decent writing, for subtle direction, for the chance to watch good actors ply their craft, and indie filmmakers know how hungry we are: They see a market, and they're not wrong. The problem is that everyone wants a hit, à la "Juno" or "Little Miss Sunshine," which may explain why there's a sense of desperation pouring, like sweat, off so many current indies.

Noam Murro's feature debut, "Smart People," suffers from that kind of perspiration problem. There's not a minute in the picture where we're not reminded, either by a too-polished line of dialogue or a precociously unstudied camera angle, that this is a movie for an intelligent, sophisticated audience, an audience who just naturally gets it. "Smart People" is so preoccupied with congratulating us for getting it that it fails to give us much to get in the first place, even though it features a respectable ensemble of actors -- among them Dennis Quaid, Thomas Haden Church and Sarah Jessica Parker -- squeezing as hard as they can to wring some life from the material.

Quaid plays Lawrence Wetherhold, a widowed professor (his specialty is Victorian literature) who's disengaged from his family, from his students and from life in general: His surly self-involvement is telegraphed early in the movie, when we see the way he parks diagonally in the lot at the university where he works (which happens to be Carnegie Mellon), piggishly taking up two parking spots. At one point he barges into the dorm room of his son, James (Ashton Holmes), who's studying at the university, and demands information about the fat bill the kid has run up at the bookstore. (The answer, an innocent and honest one, is that James is taking an art-history course, and the books are expensive.) Lawrence also has a daughter, Vanessa (Ellen Page), a straitlaced grind who belongs to the school's Young Republicans group and is reviled by all her classmates. Vanessa has essentially taken on the role of keeping the household running, and while she's both protective and possessive of her father, she's less adept at managing her own life. The fourth cog in this quirky bit of family machinery is Chuck (Church), Lawrence's brother -- adopted brother, as Lawrence is quick to point out -- a likable but unreliable moocher who shows up unexpectedly. When Lawrence suffers a mysterious seizure and is barred from driving for six months, Chuck insinuates his way into the household, ostensibly as Lawrence's driver, although he can't be relied upon to show up at the appointed time and place.

It's clear early on that Lawrence's big problem is that he hasn't gotten over the death of his wife. But when he reconnects with Janet Hartigan (Parker), a former student who's now an M.D. -- he doesn't remember having taught her, although she admits to having had a crush on him -- he's so distracted and self-absorbed that you wonder what woman would ever have seen anything in him in the first place. The movie's saving grace is that this is Dennis Quaid we're talking about: No matter what the script asks of him (it's written by the novelist Mark Poirier) he knows enough to play a person and not just a set of emotions. We get a sense of the calcified grief behind his grizzly academic's beard; even his slightly stooped, exhausted carriage, beneath those stock rumpled tweeds, speaks of a guy who just can't scramble out of his own self-pity.

Then again, nearly every actor here does good work: Parker is a low-key but sharp presence, not as desperately adorable as she was in her last few seasons of "Sex and the City." (Parker has recaptured some of her old spark now that she's doing more movie work: She was one of the best things about the somewhat strained 2005 comedy "The Family Stone.") Page has something of a thankless role here, but she knows how to make an insufferable character deeply sympathetic. And Church makes a terrifically slouchy second banana -- his Chuck is a stoner with élan.

But the movie banked around these actors doesn't serve them as well as it should. It's loaded with plot turns and dramatic emotional revelations that feel forced. Murro and Poirier have taken a simple idea and tried to layer weighty ideas on top of it, instead of burrowing beneath it to layers of more complicated emotion. (Another picture opening this week, in limited release, Tom McCarthy's "The Visitor," also features a grieving widower academic, this one played by the marvelous Richard Jenkins; it's subtle, and moving, in a way that "Smart People" just isn't.)

And call me picky, but I can't help being distressed by the fact that at one point the movie puts Quaid's character in front of a classroom blackboard on which the word "Faerie," in reference to Edmund Spenser's "Faerie Queene," is spelled "Fairie." Memo to the Miramax marketing department: You might want to think about changing that title.