This eloquent, unassuming movie evokes the miraculousness of finding a sense of place. 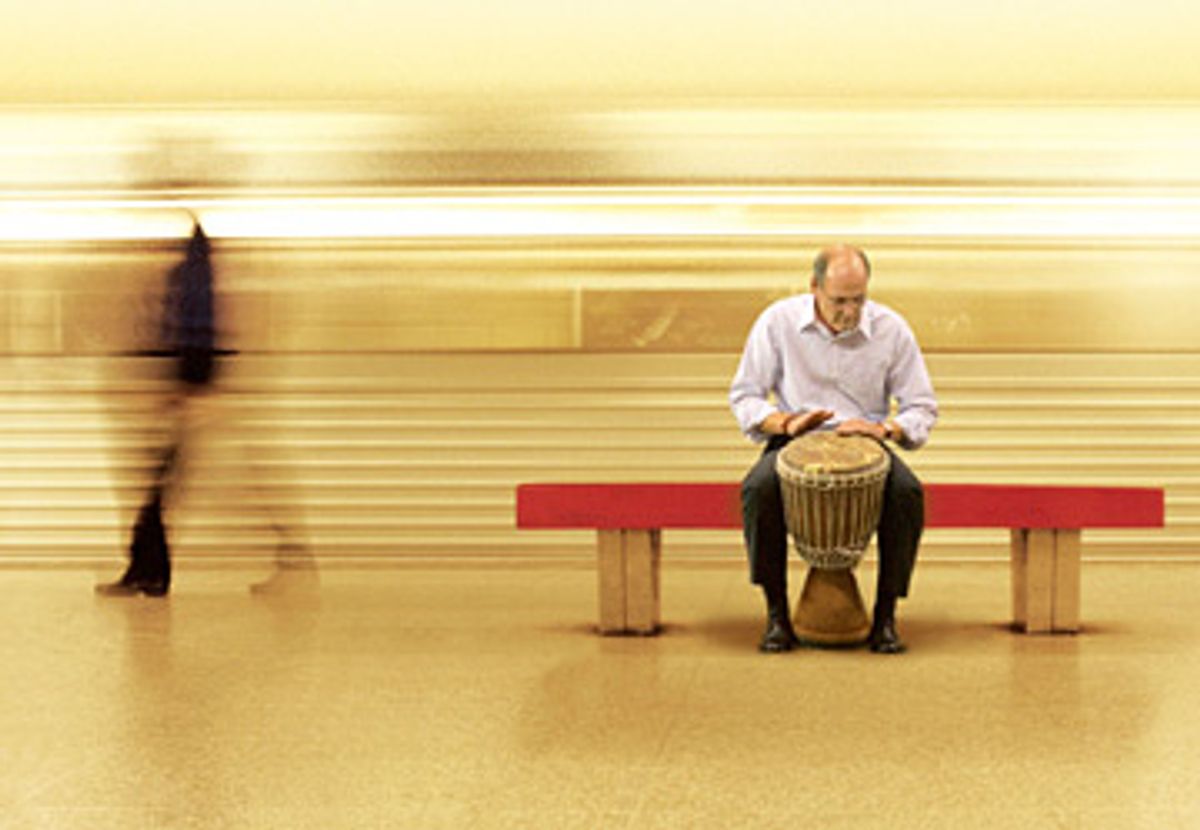 I'm afraid that describing the bare bones of "The Visitor" -- in which a 60-ish widowed professor, played by character actor Richard Jenkins, reconnects with some previously lost part of himself after he befriends two illegal immigrants living in New York -- only makes it sound like the kind of movie you drag yourself to see out of a sense of duty, one of those nice little pictures that's so timid it's incapable of either offending or exhilarating. But "The Visitor," written and directed by Tom McCarthy, who made his debut with the understated and beautifully shaped "The Station Agent" in 2003, is pleasurable on so many levels that what it's about becomes far less important than what it is. In the multiplex universe -- a place where, increasingly, marketing campaigns and marquee names are more important than movie craftsmanship -- it's sometimes easy to forget that acting and filmmaking are two of the things we go to the movies for in the first place. "The Visitor" was made by a group of people who apparently grasp that simple but elusive truth. Eloquent and unassuming, it's a picture that hits home precisely because it doesn't overreach its grasp.

Jenkins, perhaps best known for his recurring role on "Six Feet Under," is a subtle, responsive actor, but he isn't exactly leading-man material: The basic fact that any movie would make a space for his unflashy but considerable gifts seems like a minor miracle. Jenkins plays Walter Vale, a beanstalky, slightly hunched economics professor who's been teaching the same course for years and who leads a life that's uneventful and solitary. He lives alone in a spacious, silent Connecticut house that seems underfurnished and under-lived-in. In an early scene, we learn that he's trying to learn how to play piano, even though his teacher (played by a marvelously tart Marian Seldes) tells him he has zero aptitude. In later scenes, we learn, offhandedly, that his wife was a concert pianist and music teacher. Without spelling things out too baldly, Jenkins and McCarthy make it clear that Jenkins is trying to keep his late wife's memory alive in himself, but his desperation goes even deeper than that: He seems to have lost his own pulse, and he can't find it in the notes represented by the piano keys.

Walter is called to New York to deliver a paper he co-wrote (we later learn that the paper held so little interest for him that he barely had a hand in its writing), and he has a place to stay: He's kept an apartment there for years, an East Village walkup that could be a remnant from a hipper, groovier life. Then again, it might just be plain old real estate -- looking at this grayish, solemn man, it's hard to believe he ever partook of the '60s in the ways so many of his peers did. When he unlocks the door, he's startled to find that two people -- both of them illegal immigrants -- have taken up residence there: A Syrian musician named Tarek (Haaz Sleiman) and his girlfriend, Zainab (Danai Gurira), who is originally from Senegal and who makes jewelry, which she sells from a table on the street. Both parties are unnerved and a little embarrassed by the situation. Tarek and Zainab have been scammed into thinking they were living in the apartment legally; they offer to leave immediately. Walter agrees that that's exactly what they should do, but realizing they have nowhere else to go, he changes his mind for reasons he clearly doesn't even understand. They should stay with him, at least for the night, until they can figure out what to do.

The story that grows out of this almost too-simple setup is a real New York story, made by someone who understands how the city works -- or, in some cases, doesn't work. The picture is partly a brief on the plight of illegal immigrants in this country; at times, McCarthy may hammer a little too persistently at that theme. But more significantly, it's a story about friendship and connection, and about how we sometimes locate the best parts of ourselves by reaching out to others. The movie's title is intentionally ambiguous: Who, exactly, is the visitor? Who belongs here and who doesn't? "The Visitor" is about the miraculousness of finding a sense of place, even when a person feels doomed to dislocation.

That's a heavy concept to fold into a small movie, but "The Visitor" works because the writing, the performances and the direction are all so perfectly in sync. Tarek is by nature open and friendly (Zainab is more guarded, although she eventually warms to Walter as well), and when Walter expresses an interest in African drumming, Tarek sits down and gives him an impromptu lesson. Not long after, he brings Walter to a drum circle in Central Park, where the two take their places -- Tarek eagerly, Walter reluctantly -- among a group of musicians playing an array of percussion instruments and various flutes. It's a mark of the movie's generosity that no one makes a big deal out of the nerdy white guy in the gray suit, sitting among a bunch of far hipper looking (and largely nonwhite) percussionists. McCarthy doesn't have to draw attention to the fact that Walter doesn't fit in. He's more interested in showing how readily Walter is drawn into this larger circle, how even his deep isolation can begin to fall away in an afternoon.

"The Visitor" may be a gentle picture, but it's not a toothless one. Tarek is arrested, and not as the result of any wrongdoing. His mother, Mouna (played by the extraordinary actress Hiam Abbass, star of "The Syrian Bride" and "Satin Rouge"), treks from Detroit to New York to try to help him, and Walter reaches out to her as well. McCarthy, an actor himself (he appeared in the most recent season of "The Wire"), gives everyone something to do: Gurira and Sleiman are extremely charismatic actors, but they're warm, believable ones too -- the friendship they forge with Walter feels natural, not manufactured. And Abbass is, as always, wonderful: At first she matches Jenkins' low-key style; their scenes together intensify gradually, but even then, the shifting of gears is so gentle that by the movie's end, we're as surprised as they are to see how far they've come.

Jenkins is extraordinary here, not because he does anything big, but because everything he does is so economical and intuitive. At one point Walter visits Tarek in the dismal Queens detention center where he's being held. He's carrying a letter from Zainab, who can't visit Tarek without risking deportation herself. Tarek stops Walter from slipping the letter under the Plexiglas divider between them, which is forbidden. But he tells Walter it's OK for him to hold the letter up to the partition, so he can read it.

Walter holds the letter to the glass and instinctively turns his head, a way of allowing Tarek privacy. This is the sort of subtle actor's moment that a dumb director could ruin, by letting the camera linger just a fraction of a second too long, or by adding melodramatic music to intensify the effect. But McCarthy underplays everything here. There are places where a character will ask Walter a question, and instead of countering with a line of dialogue, Jenkins responds with just a look: This is that rare script written by someone who understands that writing doesn't just mean dialogue.

In some ways, "The Visitor" reminds me of pictures that were made in, and about, New York in the 1970s -- movies like Hal Ashby's "The Landlord" and Paul Mazursky's "Next Stop, Greenwich Village." Like those expansive yet only moderately budgeted movies, "The Visitor" captures something of the essence of the city, chiefly the capacity for decency that thrives here in the midst of so much chaos, anxiety and nervous energy. This is a small picture that explodes the boundaries of what size really means. Sometimes it's the smallest gesture that makes you feel most alive.