Steve Coogan's Alan Partridge is the greatest TV chat show host of all time -- if only in his own mind. 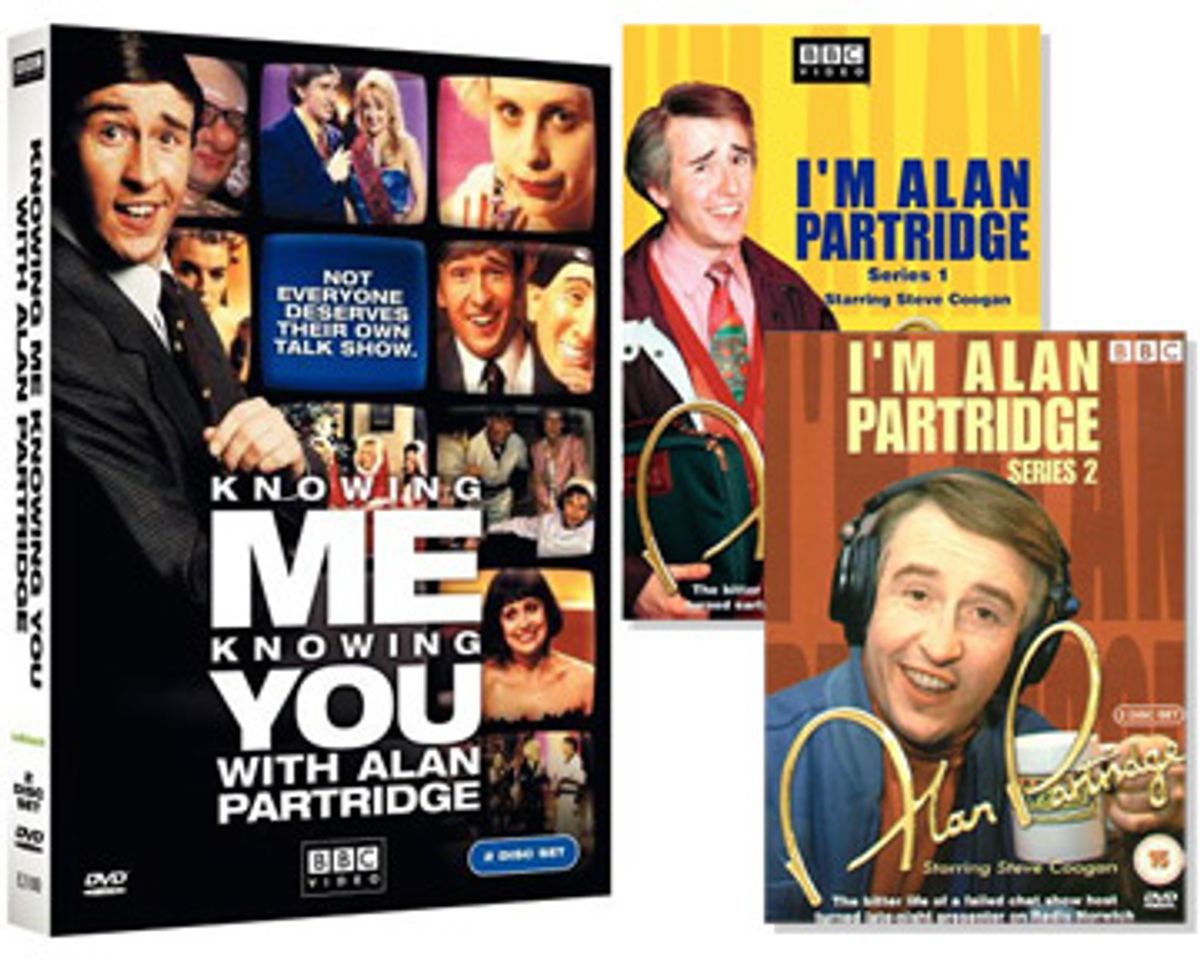 The greatest television chat show host of all time (if only in his own mind), Partridge is a megalomaniac who makes awful puns, has no rapport with guests and shows more regard for his own celebrity than that of anyone he's interviewing. He's Regis Philbin without the bland likability, Merv Griffin from hell. And with his out-of-touch, self-centered charms, he conquered Britain as the focal point of BBC Television's "Knowing Me, Knowing You ... With Alan Partridge" and "I'm Alan Partridge," both available on DVD.

Partridge, played by the brilliant Steve Coogan, is a character in the same way Stephen Colbert is a character. Like the "Colbert Show" host, Partridge was born from a satirical news show, making his television debut on "The Daily Show"-esque "The Day Today" (a spinoff of the radio show "On the Hour") as a sportscaster with little knowledge of his subject. Also like Colbert, Partridge is a caricature of a familiar TV type, whose cult of personality overshadows his subject matter. But while we laugh with Colbert (whose over-the-top tone is more of a wink and a nod, reminding us that the actor beneath the suit is also in on the joke) as he skewers his guests, we are meant to laugh at Partridge.

Artlessness is at the heart of the Partridge character, predating the hardcore cringe factor induced by Ricky Gervais' David Brent on "The Office." Still, even if you don't sympathize with David Brent, you have to pity him, because he's pathetic in the extreme. Partridge, on the other hand, is just an asshole: In the Christmas special "Knowing Me, Knowing Yule," which originally aired on the BBC in 1995, Partridge admonishes a guest for chewing too loudly, saying, "I'm not being rude but you do sound like a pig." In "I'm Alan Partridge," a two-series sitcom follow-up to "Knowing Me, Knowing You" that aired in 1997 and 2002, he crashes a funeral to brown-nose his way back onto television -- asking the distraught widow if she was close to the deceased, answering a cellphone call about acquiring stereo speakers -- while wearing a Castrol GTX windbreaker.

Partridge sprang from the minds of Armando Ianucci, "Closer" playwright Patrick Marber and Coogan, who plays Partridge with such precision it's difficult to remember that there is a movie star under the comb-over and official Alan Partridge Tie and Blazer Badge (which Partridge bestows upon many of his guests -- including a corpse). Coogan -- who starred in Michael Winterbottom's "24 Hour Party People," was seen by the masses in the Ben Stiller kiddie flick "Night at the Museum," and will appear in the Sundance hit "Hamlet 2" and Stiller's "Tropic Thunder" this year -- conveys Partridge's awkwardness with sly facial expressions and sporadic slapstick.

"Knowing Me, Knowing You ... With Alan Partridge," which had a six-episode run in 1994, is named after a song about breaking up by Alan's favorite band, ABBA. Partridge interviews/attacks various fictional celebrities -- from a Barbra Streisand-type chanteuse who, before taking part in an ABBA medley duet, keeps referring to her host as "Alec," to a restaurant critic Partridge accidentally shoots on live television. (Partridge immediately sends condolences to the man's family, but needs a reminder of the deceased's name.) The guests, played by Marber, David Schneider and the excellent Rebecca Front, leave the interview couch with the same contempt for Partridge as he has for them. Each episode includes what Partridge introduces as a new reoccurring feature, which is then never repeated -- except for the segment "Knowing Me, Knowing You Another Alan Partridge" where Partridge interviews people who share his name.

The first episodes are more uncomfortable than funny -- Coogan himself seems unsure of how to make Partridge worthy of a full half-hour. But as the series continues Coogan finds his footing by allowing Partridge to be physical and outlandish. In the sixth episode, Partridge takes part in a dance sequence with the Alan Partridge Playmates, outfitted in boxy green blazers and creepy plastic Alan Partridge masks. Partridge later tells us the masks were recently used in a "Point Break"-style bank robbery, before instructing us where we can buy our own ("The kids love 'em").

"Knowing Me, Knowing Yule," packaged on DVD with "Knowing Me, Knowing You," is particularly hilarious. Afraid that his chat show will not be renewed, Partridge interviews the chief commissioning editor of the BBC -- Tony Hayers (played by Schneider), who returns in "I'm Alan Partridge" -- as a means of not so subtly begging Hayers to re-sign it. Upon finding out that Hayers is Jewish, Partridge assures him that the whole crucifixion thing is water under the bridge.

"I'm Alan Partridge" ditches "Knowing Me's" talk-show format for a more traditional sitcom feel. The series follows Partridge, who has lost his show and been kicked out of the house by his wife, as he takes up residence in a cheap hotel and holds down the 4-7 a.m. slot on Radio Norwich. Partridge's post-fame life is amusingly mundane. Followed around by his doting, sour-faced assistant Lynn, he tries desperately to get back on TV, pitching shows like "Inner City Sumo" ("Very cheap to make, you could shoot it in a pub parking lot"), but spends most of his time harassing the staff of the hotel where he lives.

The sitcom format allows Coogan to expand Partridge into a multidimensional character. Because Partridge no longer has a stream of celebrities to torment -- as he did on "Knowing Me, Knowing You" -- he loses his bite; his rudeness becomes more a mark of how sad he is than of his own inflated sense of self-worth. And he becomes exponentially more awkward: Trying to be manly in front of potential beer-swilling employers, Partridge sees a beautiful woman walk by and says, "She was certainly first in the queue when God was handing out ... chests, or mammary glands. Ooh! I'd love to have it off with her. Ooooh! Sex." But in the process, he becomes the least bit sympathetic.

Come on, you have to pity a man who, in all earnestness, describes Wings as "the band the Beatles could have been."