The first season of this strangely addictive Bravo show ends with even more shock and awe. 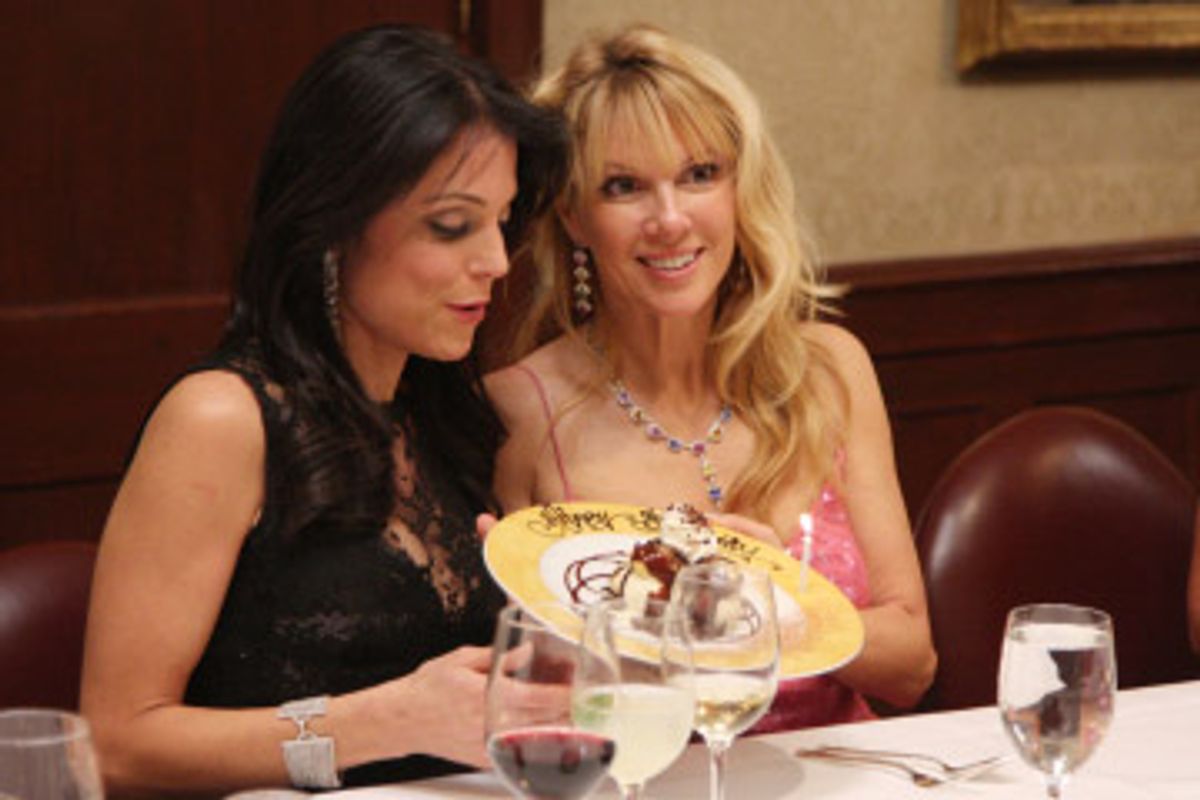 Before I had a kid, I thought it was lamentable how many women were staying home with their children instead of pursuing careers. How could women continue to make strides in the world, when they were dropping out of the workforce in droves? How could the next generation support equality, when their daughters were watching Daddy go to his important job while Mommy dropped the kids off at school, then went out to shop and get her toenails painted?

Now that I've had a kid, though, I want to shop and get my toenails painted.

Maybe that's why I love Bravo's "The Real Housewives of New York City" so much. Unlike "The Real Housewives of Orange County," a show populated by bad women who seemed to spend most of their time bickering with their thankless teenagers, flat-ironing their hair and tossing back pitchers of margaritas at the local Chevy's, the middle-aged high-society moms of TRHONYC make the life of the leisure class look so... well, leisurely!

These women don't mess around with spray tans and bad nachos, no sir. Even though only one of them is actually a housewife (and a Countess!), while the rest have jobs, they all definitely know how to take care of themselves. In fact, they discuss the importance of taking care of yourself almost constantly, advising each other "Take care of yourself!" and "The most important thing is to take care of you!" over and over, whether that's done by a) purchasing wildly expensive fashions, b) having a girl's night out, b) getting spa treatments, c) flying off to Miami to stay at your friend's luxury hotel after a break-up, or d) ditching a dinner party that's bringing you down. Most of the time, sadly, "taking care of yourself" seems to involve spending ungodly amounts of money.

Which brings us to last night's finale: Housewife (and businesswoman) Jill is throwing a big fancy get-together dinner, and all the other Housewives and their families are invited. It's fun to celebrate (and take care of yourself!) by blowing lots of money, after all, and Jill needs to make up for her last dinner party, when Housewife (and businesswoman) Ramona not only exited early, she made Housewife (and graphic designer) Alex and her husband, Simon, extremely uncomfortable by brashly accusing Simon of crashing their all-girl dinner.

Although Ramona was right about Simon and Alex, who are hopelessly codependent, her behavior was pretty rude, even by a regular, non-aristocratic human's standards. Jill's been friends with Ramona for a while, but she has mixed feelings about her. "Ramona's always hot and cold," Jill told the camera at the start of the finale. "I mean, you just never know which Ramona you're going to get, Ramona or Rameana."

In truth, it's tough to know which Jill and which Bethenny and which Alex you're going to get at any given moment, either. Take LuAnn, the only Housewife who's actually a housewife -- if you can possibly use that word to describe someone who seems to spend most of her time socializing. A tall, attractive brunette with a great figure, nice taste and a surprisingly good sense of humor, LuAnn married rich, but something tells us that she's never in her life been too far from big piles of money, the kind of dusty money that gets handed down from generation to generation until no living members of the family have ever sullied their manicures by, say, fixing themselves a sandwich. LuAnn regularly leaves her kids at home with the nanny while she hits the town in her Upper East Side trying-to-be-funky outfits and sips cocktails until she feels young and hip again. Even so, it's obvious that she spends a lot of time with her children. While some mothers might feel a little sadness in their hearts when they see LuAnn's young son begging her to stay home for taco night, what I think is "Get out the door before he gets his grubby fingers on your pretty coat, lady!"

Oh, except that if I called LuAnn "lady," it would definitely send a shiver down her spine. That's the puzzle of LuAnn: One minute she's describing how she spent her weekend picking lice out of her kids' hair, the next minute she's so shocked and appalled at the inappropriateness of someone's behavior, you'd think she was the Queen of England. In last week's episode, LuAnn instructed Bethenny to introduce her to the driver as "Mrs. de Lesseps" instead of simply "LuAnn," presumably because the help should always show their respect (and demonstrate their inferiority?) by referring to her like she's their fifth-grade math teacher.

But then, all of the so-called Housewives are very, very big on the rules of What's Appropriate and What's Simply Not Appropriate. "I was shocked," they say of each other's behavior repeatedly, referring to a vocal argument with a spouse or an unfinished, scrappy-looking townhouse or an impromptu intimate conversation as if it signifies, once and for all, the inferior class and poor breeding of the party in question. LuAnn is offended when Ramona implies that models are brainless and uneducated (LuAnn was once a model!), Jill is offended when Ramona doesn't invite her to a party (But LuAnn was there!), Bethenny cries, "Totally inappropriateness!" when her father's friend gives her lingerie as a gift, and on and on and on.

Of course, the non-stop backstabbing is what makes the New York Housewives so special. They aren't just "bummed" or "psyched" like the dimwits of Orange County, they actually analyze each other's faults with some degree of intelligence. "She uses her brutal honesty to cover her pain," Jill says of Bethenny, which is almost as biting as Bethenny's assessment of Alex: "I think Alex overcompensates for insecurity by being pretentious."

For all of their expertise on etiquette and psychoanalysis, though, none of the Housewives can quite agree which of the offenses and personality disorders they encounter are the most serious. Is it worse to yell at your husband in front of a crowd (Ramona), or to invite people over to your half-finished townhouse (Alex)? Is it worse to focus too much on material wealth (Jill) or to pretend that you're above "things" while you tour $3 million apartments (Bethenny)?

They do know exactly where they stand in the New York City caste system, however. Alex obviously sees herself as socially ascendant, and she seems to view rising in the social ranks as a highly entertaining but difficult sport with defeats (arriving too late for the pre-opening-night cocktails at the Met) and victories (appearing in the New York Times Style section the next morning) along the way.

Meanwhile, LuAnn obviously feels, as a Countess, her rank in the world is indisputable, and despite her elitist pickiness about how people address her, her confidence with her status shows in the fact that she's generally a little less petty and more generous in describing the other Housewives. Jill also seems certain of her standing but is more easily outraged by the others, while Bethenny is more focused on promoting herself and her business (she's a natural foods chef) than on her social rank, but she also loses her temper more often than the rest.

All of these strange motives and dynamics are in play at Jill's fancy dinner party, of course. Ramona seems apprehensive about the party beforehand, and tells her friends that her "frankness" caused problems but she aims to "make it up to everyone." Cut to the dinner party, where Ramona arrives one hour late. Jill is appalled yet again, but Alex doesn't mind. "Ramona seems like she's trying to be nice, so that's fine," says Alex. "I don't believe in holding grudges."

So Ramona promptly starts in on Alex, grilling her on what she did while Simon was in Australia for nine days for his stepfather's funeral. "What do you do for entertainment? Are you allowed to go out with women then? Are you allowed to have a girls' night? Or do you have to get a permission slip from him?"

The other Housewives look horrified. Bethenny says to the camera, "This week, on an all new 'Ramona Tortures Alex For Being Codependent'!"

Alex admits that she never went out. She has two young kids at home, after all, and she says that every night she was so exhausted, she just sat on the couch with a cocktail, alone. Ramona says to the camera, "To me, that's strange." Ah, but darling, to the rest of the world, that's life.

Now we're completely on board with Alex and Simon, ready to forgive them all of their codependent, snotty, upwardly mobile trespasses... until their son Francois, who's 4 years old, starts playing with Bethenny's boyfriend Jason's hamburger as he's trying to eat it. Francois's parents stand by as he rips the hamburger to shreds, and say nothing to him.

"Jason, you have sons, don't you?" Simon asks Jason as Simon's son repeatedly stabs a fork into Jason's dinner until it's unrecognizable. Jason says yes, to which Simon replies, "So you know the story." Well, now we know Simon's story, anyway.

And so the finale of "The Real Housewives of New York City" ends the same way it began: With the viewers at home wondering which of these sometimes charming, sometimes obnoxious, incredibly wealthy women is the most insane of them all. Which will we get, gracious LuAnn or snotty LuAnn, helpful Jill or resentful Jill, witty Bethenny or nasty Bethenny? Do we hate these terrible women or do we love them, and which of them do we love/hate the most?

I guess we'll have wait until next season to find out. If only we could just shop and get our toenails painted until then.