What will they really do about Iraq?

McCain, Clinton and Obama have all made broad pronouncements about how they'd handle the war as president. But how do their plans hold up under scrutiny? 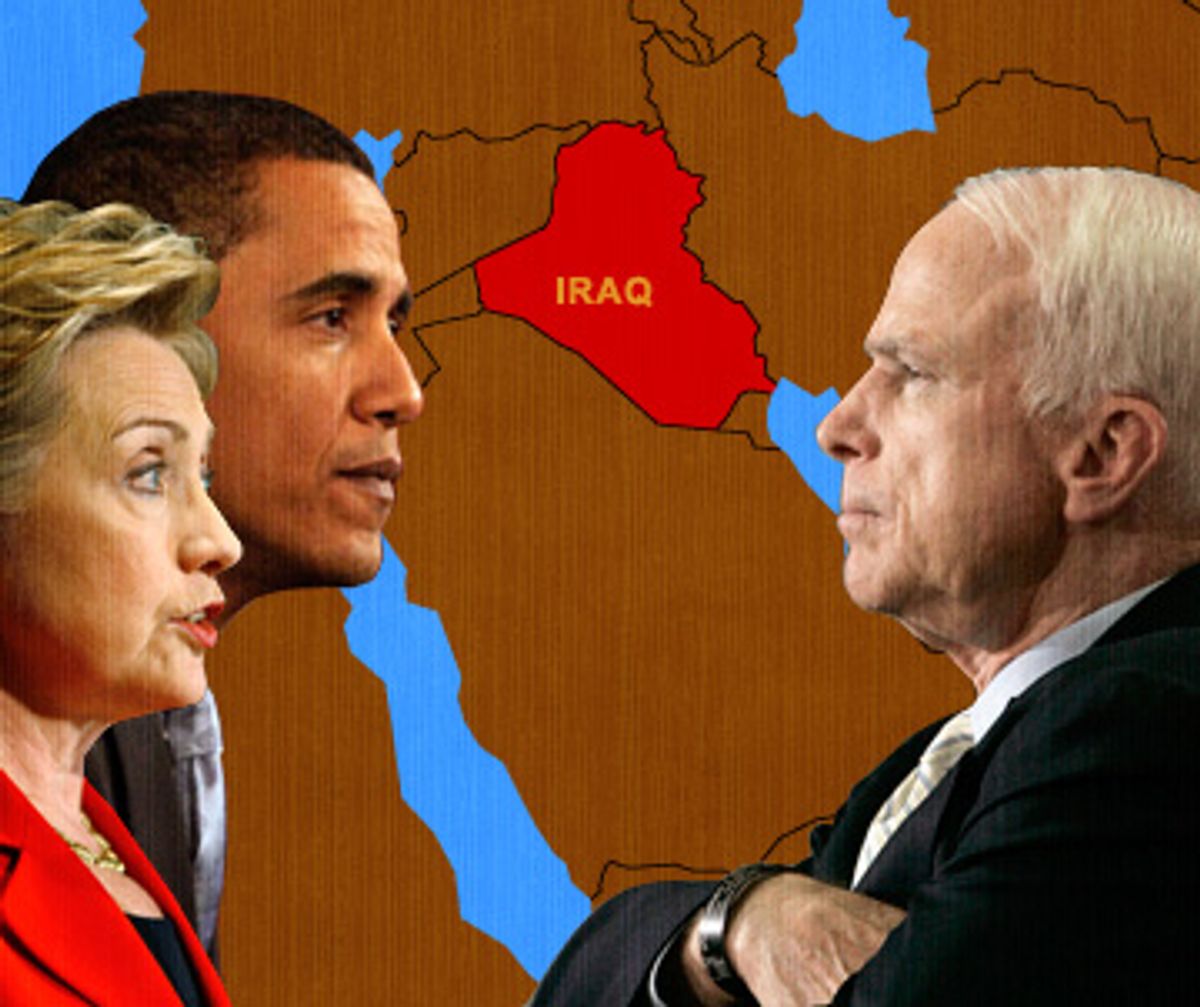 Last week President Bush put to rest any question about whether he will hand over the full weight of the Iraq debacle to his successor. By late summer, he said, the number of troops in Iraq will be reduced to pre-surge levels. But after that, the withdrawals will stop. Bush said that Gen. David Petraeus, the commander there, will have "all the time he needs" to figure out if more soldiers should be pulled out.

Bush's obduracy on the future of Iraq underscores the political stakes of the war heading toward the November election. As Republican Sen. Bob Corker of Tennessee put it during a Senate Foreign Relations Committee hearing on Iraq last Tuesday, "I think people want a sense of what the end is going to look like."

As they've campaigned for president, John McCain, Hillary Clinton and Barack Obama have staked out their positions on the war. But remarkably, even this far into the campaign their plans have largely escaped close scrutiny by the press.

Salon spoke recently with a half dozen national security advisors to presidential candidates from both parties, as well as with independent military experts, about the daunting Iraq issue. In private conversations, all agreed that a political solution among Iraq's bitterly divided sects was the only road to some version of success in that country. And all agreed that certain outcomes, such as a regional war, would be unacceptable from the standpoint of U.S. interests in the crucial oil-rich area.

But even in off-the-record conversations, it was difficult to nail down what the three candidates consider to be an acceptable, and attainable, end state in Iraq. And there is little evidence that the broader plans and tactics espoused by the candidates would result in such an outcome.

Options in Iraq are now limited to a set of bad choices. Even if the next president navigates skillfully, Iraq could still collapse into chaos, drawing its neighbors into a bloody regional conflict costing countless lives and wreaking havoc on the world economy.

The gloomy situation is an undeniable legacy of the Bush administration.

"If you make enough mistakes long enough, you end up with unappealing choices," said Stephen Biddle, senior fellow for defense policy at the Council on Foreign Relations, who is not an advisor to any of the presidential candidates. "Unappealing choices make lousy political manifestos."

John McCain's position essentially boils down to this: The factions in Iraq that show little sign of reconciling five years into the war will somehow reconcile if lots of U.S. troops remain in Iraq. In other words, stay the course -- success is within reach.

The very similar positions of Barack Obama and Hillary Clinton essentially boil down to this: The factions in Iraq that show little sign of reconciling five years into the war will somehow reconcile if lots of U.S. troops leave. In other words, start pulling out now -- the Iraqis won't step up until we do, and we can no longer afford to stay.

McCain was a huge supporter of the original invasion, and later Bush's troop surge plan. McCain today, at least, is crystal clear on his overarching goal for Iraq. As he told the Los Angeles World Affairs Council late last month, success in Iraq -- as well as in Afghanistan -- is the "establishment of peaceful, stable, prosperous democratic states that pose no threat to neighbors and contribute to the defeat of terrorists." He's aiming high, to put it mildly. Very few national security experts think Iraq is going to look like post-World War II Germany anytime soon, if ever.

During the Iraq hearings last week, McCain told the Senate Armed Services Committee that "to promise a withdrawal of our forces regardless of the consequences, would constitute a failure of political and moral leadership."

McCain seems Sisyphean when it comes to the tactics he says will result in democracy in Iraq. Fifteen months after Bush announced the surge as a means to bringing about political compromise, there has been very little national political reconciliation, although the Bush administration has been at great pains to suggest otherwise. Ambassador Ryan Crocker was reduced last week to citing a redesigned Iraqi flag as evidence of progress. "In January, a vote by the Council of Representatives to change the design of the Iraqi flag means the flag now flies in all parts of the country for the first time in years," he told Congress.

The Iraqi Parliament did recently pass three laws: They allowed members of Saddam Hussein's Baath Party back into government, approved local and regional elections for this October, and granted amnesty in the cases of tens of thousands of prisoners in Iraqi and U.S. custody. But the extent to which these laws will be implemented is unclear.

A third problem with the McCain paradigm was exposed by the recent explosion of violence in the southern Iraqi city of Basra. It showed that anytime rival Iraqi factions decide to engage in a major battle, even 160,000 American troops can do little about it. The whole thing could spin out of control at any time.

While McCain may be clear about his ultimate objectives in Iraq -- however farfetched -- Obama and Clinton remain frustratingly vague. They consistently vow to withdraw U.S. troops -- with little discussion about exactly what would be an acceptable outcome in Iraq or how it would be achieved.

"As president, I will do what this president has failed to do," Clinton said in response to Bush's speech last Thursday. She said she would "recognize reality and end the war responsibly."

The Democratic candidates say they want to send home one or two brigades every month. Both candidates have said that, just in case things get out of hand, a "residual force" will remain -- but of indeterminate size.

"What I propose is not -- and never has been -- a precipitous drawdown," Obama said in a speech in Fayetteville, N.C., in March, on the anniversary of the war. "It is instead a detailed and prudent plan that will end a war nearly seven years after it started."

The Democrats' withdrawal plans are not without wrinkles. A central assumption is that the threat of a departure of U.S. forces will stir real action on the Iraq political front. "My plan to end this war will finally put pressure on Iraq's leaders to take responsibility for their future," Obama said in his March speech. "Because we've learned that when we tell Iraq's leaders that we'll stay as long as it takes, they take as long as they want."

But there is scant evidence that the disparate factions in Iraq will respond positively to such pressure. And it poses considerable risk, as Petraeus pointed out to Congress last week. "The recognition that we are drawing down obviously does put pressure on them," Petraeus agreed. "And what we want to do is put enough pressure on them to generate productivity activity, but not so much pressure that they go into their corners, hang on to what they've got, and posture themselves to take on each other, once we no longer have the capacity to keep everybody making way together." In other words, the various factions might choose to hunker down and get ready for an even bigger civil war once the U.S. presence diminishes.

Obama's national security advisors argue that there is evidence the Iraqis will cut whatever deals are necessary once they realize U.S. troops are on the way out. In fall 2006, Sunnis in western Iraq agreed to call off attacks against the U.S. Marines and to focus on killing al-Qaida in Iraq. Dubbed the "Sunni awakening," this kind of local deal making has resulted in the most dramatic decline in violence in Iraq. Obama's camp claims that the Democrats' triumph in the 2006 elections partly motivated this sea change among the Sunnis because it signaled the possibility that a U.S. withdrawal was more imminent.

But it's difficult to discern whether the U.S. elections were a real factor. And there isn't any evidence that the success, regardless of what catalyzed it, would be replicated on a national scale with a major withdrawal of American troops.

Still missing from the Democratic candidates' calculations is just what the end picture might look like. What version of Iraq would pass muster with respect to U.S. interests and responsibilities in the region?

The answer to this question is difficult without any good options left in Iraq. Indeed, the leitmotif in the private discussions with the national security advisors was their acknowledgment of the devastating damage done by the Iraq occupation and the deterioration of U.S. military readiness during the Bush administration.

There are experts advocating relatively detailed and potentially realistic strategies and outcomes for Iraq. Biddle, who also served as a member of a senior advisory group on Petraeus' staff in Baghdad in March and April of 2007, is one of them.

His basic argument is that the surge did not promote national political reconciliation. But the Sunnis did agree to a truce. And Shiite cleric Muqtada al-Sadr has also stuck to a cease-fire (at least at the time of this writing).

These are local victories, but victories nonetheless. The White House has called this "bottom-up" reconciliation, though so far it remains stalled mostly at the bottom.

Biddle suggests basically forgetting about any central Iraqi government at the top for now and instead concentrating on duplicating these cease fire agreements across Iraq. That would amount to a patchwork of semiautonomous regions, creating, hopefully, a relatively peaceful whole.

"I think the bottom-up approach has the potential to produce stability in Iraq. It is not a guarantee, but it is far and away the most plausible possibility at the moment," he said. "The stability it would provide is not going to be Eden on the Euphrates. This is not going to produce a Jeffersonian democracy and act as a beacon of freedom for the Middle East and all the rest any time soon," he added. "But a stabilized Iraq that looks a lot more like Bosnia or Kosovo rather than Germany or Japan [after World War II] would nevertheless meet the critical American objectives of this war at this point."

This might take fewer troops than McCain wants to keep in Iraq. But it might also take more troops than Obama and Clinton, with their pledges to begin withdrawing, want to leave there. It may be that none of the three have a terribly convincing plan for how to resolve America's ongoing foreign policy nightmare.