Remember: Just because a movie has been produced by Judd Apatow doesn't mean it's good. 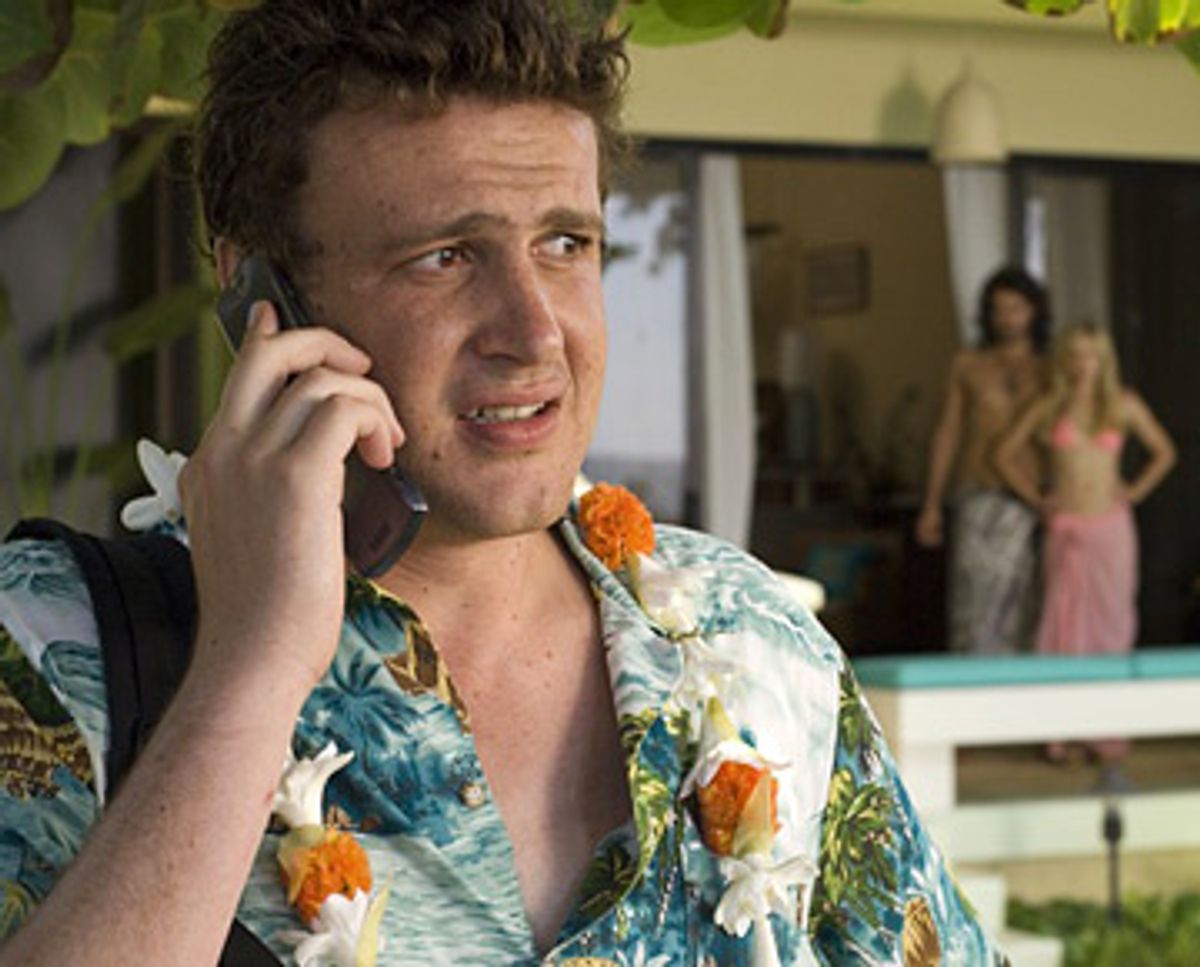 There's danger in the air when a funny, perceptive writer and director becomes a tastemaker, a sort of guru who has knowingly or otherwise accepted the task of shaping what audiences want instead of simply giving it to them. Judd Apatow isn't quite there -- yet. But with "Forgetting Sarah Marshall" -- which wasn't written or directed by Apatow but is the latest picture to fall under his ever-expanding umbrella as producer -- he moves one step closer to becoming a brand name rather than a breathing, thinking presence with a distinct sensibility.

"Forgetting Sarah Marshall" was directed by Nicholas Stoller (it's his debut) and written by Jason Segel (one of the slacker sidekicks in "Knocked Up"), who also stars. And conceptually, at least -- the plot involves an average-looking, underachieving guy who's desperate to forget the beautiful, successful woman who's just dumped him -- the picture suggests it has the Apatow touch. In the two movies he directed, 2005's "The 40-Year-Old Virgin" and last year's "Knocked Up," Apatow dug deeply into everyday insecurities and located, instead of just plain old neuroses, people's capacity to surprise even themselves.

But "Forgetting Sarah Marshall" is less Apatow than it is Apatowistic. Behind every gag -- and some of them are inspired, if poorly executed -- you can hear the scratchy sound of a checklist item being ticked off or, worse, the not-so-faint jingle of cashing in. Segel plays Peter Bretter, a slackadaisical composer whose job is to supply music for a hit crime show, although the chief requirements of the gig seem to consist of slouching around the house in sweat pants while eating cereal from a giant mixing bowl; the piano in the corner is just part of the furniture. Peter is also the boyfriend of the show's star, Sarah Marshall (Kristen Bell, of the late, great "Veronica Mars"). When Sarah drops him, suddenly and unceremoniously, for a pompously elfin English rock star named Aldous Snow (Russell Brand), Peter -- now not just lazy but lazy and depressed -- burrows even deeper into his sweat-pants cocoon. To get away from it all he heads for Hawaii, only to discover that Sarah and her new beau are booked into the same resort hotel -- although there is some hope in the fact that one of the resort's comely employees, Rachel (Mila Kunis), shows glimmers of interest in him.

It's not that certain gags in "Forgetting Sarah Marshall" aren't funny: There's an early montage in which Peter has casual and somewhat unsatisfactory sex with numerous partners, including one who beams up at him as he's grinding away, repeatedly murmuring, "Hi!" like a glazed automaton. Or the way, explaining the tedium and uselessness of his TV-show work to a starry-eyed civilian, Peter cries out in frustration, "There's no melody; it's just tones! Dark, ominous tones!" The wonderful Jack McBrayer, of "30 Rock," has a small role as a Christian newlywed who's having trouble gaining entrée into the world of wedded bliss: His wild-eyed innocence is both touching and faintly crazy. And almost everything Brand does is casually funny, not because he necessarily has the best lines but because he tosses off the ones he does have as if they were Sobranie butts. Plus his character is the kind of guy who wears flip-flops with leather pants. And how can you not laugh at that?

But scene after scene, there's always something a little off about "Forgetting Sarah Marshall." Even in the midst of the movie's attempts at sharp-edged humor, Segel and Stoller do try for a degree of sweetness, or at least even-handedness; they clearly want us to feel sympathy even for characters who have behaved badly. Still, those moments feel like afterthoughts: Toward the end of the movie, Bell's Sarah is given a few chances to show she's essentially a decent human being, but mostly the character comes off as shrill, brittle and spoiled, and there isn't much Bell can do to give her more dimension.

And sometimes even just careless camerawork is enough to destroy a great gag: Early in the picture, when Sarah shows up at Peter's house to break up with him, he greets her wrapped only in a towel. When she drops the news, the towel drops too, and Peter stands before her not just naked, but exposed. Instead of lingering on Peter's body, letting his face and his mournful-looking cock tell the story of what he's feeling, the camera moves away from him, and back again, giving us plenty of chances to cotton to the bittersweet nature of the gag. How many chances do we need? I think the movies need more full-frontal male nudity -- it was featured offhandedly, and hilariously, in another Apatow production, "Walk Hard: The Dewey Cox Story" -- but it needs to be used intelligently, not just thrown away. In "Forgetting Sarah Marshall," it's a great idea that misfires.

Apatow has been a producer (and a writer) longer than he's been directing, and the pictures he's produced since his two big directing successes -- "Superbad," "Walk Hard," "Drillbit Taylor" -- have ranged from charming to mildly entertaining to dreadful. He can't be held responsible for all their flaws; at the same time, his name alone is no seal of quality. "Forgetting Sarah Marshall" has some of the Apatow earmarks -- chiefly, a leading man who looks like a regular guy. Segel is appealing enough at first, but before long his character's ceaseless self-absorption is just wearying. We need to be able to laugh through his pain, not feel deadened by it, and Segel doesn't have enough natural charm, or perhaps enough stamina, to carry us through.

The character and the way he's played are representative of the problems swirling around in the universe Apatow has created. Characters like Peter may tap the Zeitgeist: There are lots of regular guys out there who deserve to find a nice (and, if possible, incredibly beautiful) woman that they can really connect with. But the fact that a guy is "regular" doesn't necessarily make him great. "Forgetting Sarah Marshall" follows the Apatow formula faithfully enough. All that's missing is charisma -- the je ne sais quois that makes us fall in love in the first place.