America the stupidful! As our nation falls to swine, two of our best comedies -- "South Park" and "Paradise Hotel 2" -- will chart our decline in laughter (through the tears)! 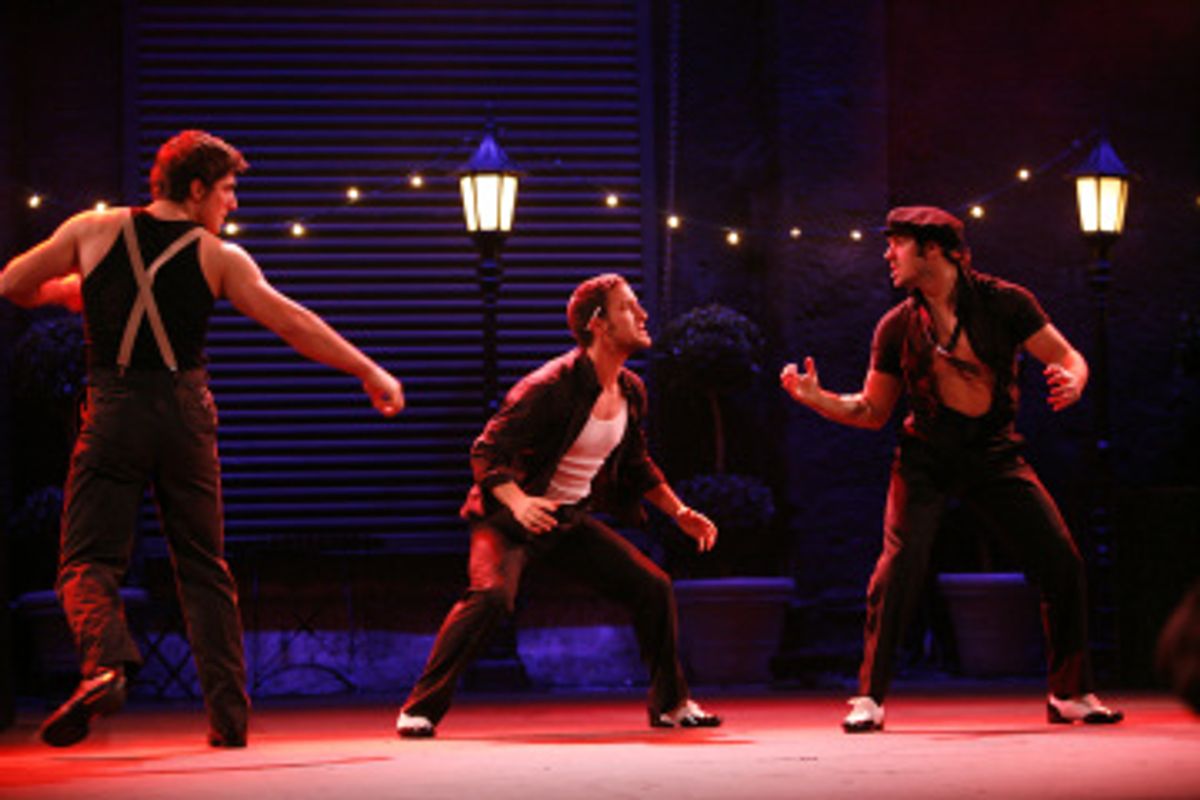 This morning at the Coffee Bean, I spotted a bottle of water in the display case that had the words "Fat Free" written in a huge font on the label. Yes, there's no doubt about it now. We are truly a nation in decline.

I remember when bottled water really started to take off, it worried me that water labels said things like "The Thirst Quencher!" or "Nature's Best Hydrator!" Now we know that our cultural downward slide is almost complete. Either the marketing departments have finally accepted the fact that they have to appeal to a country of Neanderthals, or the marketing departments themselves are staffed by half-wits and numbskulls and confused, slow children. "Hey, look, guys, let's not forget to remind people that there's no fat in water!" "Yes, because ... there's only water in water." "Right. In fact, maybe we should put 'Low sodium' and 'No sugar!' and 'Wheat-free' and 'Lactose-free' on there, too." "Definitely! Consumers need to understand that water is the most robust, scalable solution to the ongoing challenge of thirst."

Gazing at that bottle of fat-free water in the display case this morning, I wondered, how does this story end? What happens to fierce, egotistical, clumsy, dumb-as-dirt animals like us when we start to lose our power?

Paradicey
Thankfully, "Paradise Hotel 2" (9 p.m. EDT Mondays on Fox Reality) offers a few clues. If the residents of paradise are any indication, we'll handle our powerlessness by pounding fruity cocktails, high-fiving and coming up with elaborate games that involve shoving our tongues down each other's throats while a crowd of bleary-eyed clowns looks on. Sadly, though, after several weeks of this, the buzz will wear off and a permanent hangover will set in, and we'll slowly but surely start to turn on each other.

Yes, most stories end the same way they begin. Think of the Garden of Eden. God created Eve from one of Adam's ribs, and then, resenting her subordinate status, she went off to flirt with the devil and taste his forbidden fruit. Adam went ballistic over this, but Eve said he looked stupid when he was mad and pointed out that he wasn't wearing any pants. Adam fashioned a quick codpiece of magnolia leaves, but alas, it was too late. Adam and Eve were cast out of paradise and forced to learn to till the earth and make grilled cheese sandwiches and set the clock on the microwave all by themselves.

This is sort of how it works at "Paradise Hotel 2," too. After weeks of sticking together, making sure that none of the Original Guests (as opposed to the new guests) are ever kicked out of paradise, the O.G.s evict Original Guest Charté, and then Raheim -- and then Myrna comes and boots everyone's favorite pal, Tanya, simply because Myrna liked the idea of stealing Mike, Tanya's roommate/boyfriend, who had previously confessed a love of Asian women.

When you're powerless, though, the powerful like to shove it in your faces -- we Americans should know that better than most. Thus do the gods of paradise dictate that one of the original Originals from "Paradise Hotel" -- the brilliant, breathtaking, unforgettably obnoxious first version -- will join the inferior, drab residents of "Paradise Hotel 2." So in walks legendarily stupid Zack, a pretty boy whose empty-headed remarks have attained an almost mythical status. "You cannot argue with me. I'm a debater. I'm a lawyer," he famously told the other residents of paradise. "I have lawyer in me."

Later, Zack became jealous of rival Alex and whined, "Why is he the one getting all of the attention? I'm the one in better shape. I'm the better-looking one!"

Zack claims he's older and wiser and has a cooler head than he did when he was a resident of the first "Paradise Hotel," and that makes him uniquely poised to win the "grand prize," which poor host Amanda Byram keeps alluding to, but which remains so shrouded in mystery that we're beginning to suspect that it's a $50 gift certificate to the Olive Garden.

Poor Zack quickly tells Mikey that the love Mikey discovered with ousted Tanya is remarkably similar to the timeless love Zack shared with Amy, his feisty lady in paradise. Zack doesn't tell us what ever happened to that timeless love, once the Fox-crossed lovers were cast out of paradise forever and ever. Did it blister like a raisin in the sun? Did it fester like a sore, and run? Or did Zack get so many sexual offers from the Girls Gone Wild crowd at Barney's Beanery that he dropped Amy like a hot potato once the cameras stopped rolling?

Who knows? All we know is that Zack has thrown a major wrench into the gears of paradise, playing the old and new guests against each other and making all of the residents of paradise squirm and grit their teeth -- except for Lauren, who uncharacteristically swooned and stuck her tongue down Zack's throat during a game of Truth or Dare. Even so, Archie Comics wannabe Aaron is probably the odd man out after having called Krista "everyone's little troll doll that people rub to make you happy." Confusing, yet funny nonethless. But let's face it, in paradise, having a good sense of humor gets you nowhere.

You know what I remembered after watching the most recent episode, though? This show is supposed to be about forcing hot young people to make out, but so far, most of us have seen more hot whippersnapper action in line at Boba World -- you know the type, with the black eyeliner and the saggy-assed, tight-ankle rocker jeans and the Amy Winehouse hair. (What's with the poofy Amy Winehouse hair, kids? Do you really want to look like a junkie who earns her drug money from being an extra on "The Wonder Years"?) Anyway, like I said, we all have so much to learn from paradise. And mark my words: Just like the residents of "Paradise Hotel 2" before them, the dim bulbs of America will go from bumbling around, drunk and happy, to tearing each other apart and going aggro on a global scale. ("Why is China the one getting all of the attention? I'm the one in better shape! I'm the better-looking one!") But that doesn't sound all that bad, does it? As long as we're not crouching in mud huts, eating goat kabobs with our bare hands, I'm fine with it.

Confederacy of dunces
In fact, the one good thing about being raised in a downward-spiraling country dominated by aggressive morons is that the comedy just keeps getting better and better. The very best comedies on TV, namely "The Office," "30 Rock" and "South Park," all get their comedy from the fact that you can't swing a clueless loser these days without hitting an ignorant asshole. Even my 12-year-old stepson, when I mentioned that I needed to watch "Big Brother 9," asked, "Is the house full of dumb butts again this year?"

Indeed, in these unique socioeconomic times in American history, there will be dumb butts. Dumb butts galore! And no one captures the creamery dumb-buttery goodness of America better than Trey Parker and Matt Stone, creators of "South Park" (10 p.m. Wednesdays on Comedy Central), which has offered up yet another brilliant season of nastiness that's about to come to a close (the finale is April 23).

Last week's episode, another timeless classic, found the residents of South Park in a state of hysteria over the fact that their Internet connections were down.

Guy No.1: There has to be a way to find out what's going on!

Guy No. 3: What did we used to do to get the news before the Internet?

News Anchor: Once again, we apologize, but we cannot bring you the news. It appears that we have no Internet here at News 4. We'll be happy to bring you up on current events just as soon as our Internet is back.

Eight days later, Randy decides to leave town. The neighbors ask him about his plans.

Neighbors: Randy, where will you go?

Randy: We're gonna head west. There's a rumor goin' around that there might be some Internet out there. So we're headin' out Californy way.

Neighbor: You don't know if there's any Internet in California?

Randy: Well, there certainly ain't none here! Look, maybe it's time you all faced reality! The Internet here is dried up.

Neighbor: It could come back.

Randy: Yeah, and maybe it won't. In the meantime I got a family that needs Internet right away!

Then there was the excellent episode a week earlier, "Eek! A Penis!" in which Mr. Garrison loudly regrets his sex-change operation, then goes in search of a mouse that can generate a genetic copy of his penis, attached to its body. The mouse with Mr. Garrison's penis attached to him eventually breaks loose, and then all hell breaks loose. Yes, this is the kind of sophisticated humor that highbrow types like myself enjoy to no end.

What's crazy about "South Park" is that even an episode about a mouse with a big, floppy penis on its back still includes plenty of biting commentary on the sorry state of American society, stuffing it all into as hopelessly juvenile and offensive a package as possible. When you think about this show's greatest hits: Chef joining a Scientology-like cult, a Mormon family moving to South Park, Cesar Milan training Cartman to be calm and submissive, it becomes clear that this show may be capturing the unique stupidity of our times better than our finest novelists and our most informed cultural commentators.

Which is nice, since those fine novelists and informed cultural commentators will have to look for work sowing beans and whipping up Boba Tea Smoothies for Chinese expats soon enough, due to the fact that America's global supremacy is dripping away faster than a body shot on the outie bellybutton of a wriggling, drunken sea donkey.

So let's all give a toast to these witty delights while the fruity cocktails are still flowing! Drink to excess, brothers and sisters, for tomorrow we squat in the dust, gnawing on goat kabobs!