Race and the white coat

Racial bias in doctors and healthcare workers is doing great harm. Is enough being done to stop it? 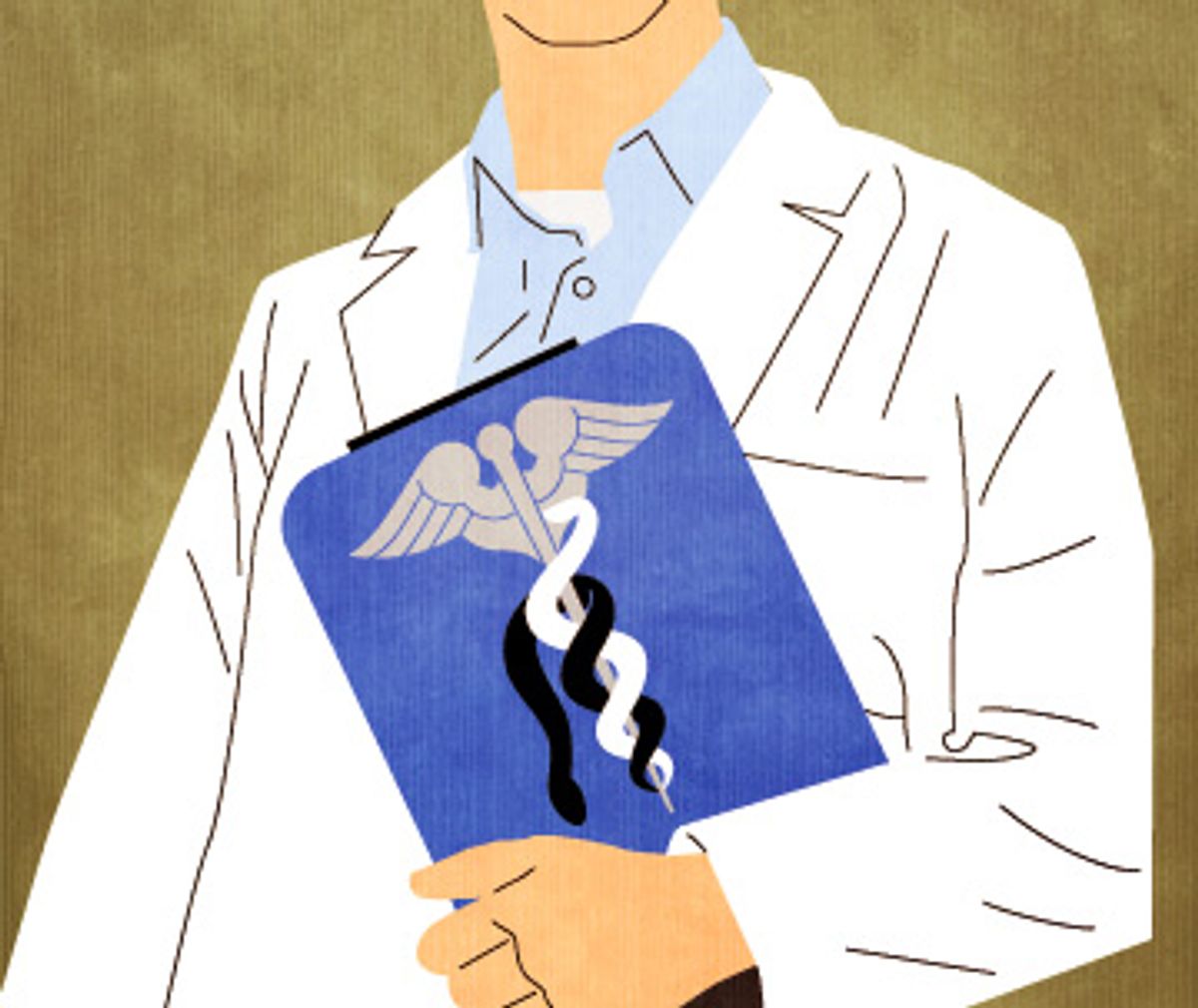 Here's something the medical community has known for a long time: Minorities in this country, particularly African-Americans, are not as healthy as whites. They suffer from high rates of cardiovascular disease, diabetes, HIV, cancer, asthma and other chronic illnesses.

There are many reasons for the disparities. Blacks have less access to healthcare. Many lack health insurance altogether. A study in the New England Journal of Medicine showed that black communities have fewer primary care doctors, and that those doctors reported a harder time getting their patients quality services due to insurance restrictions.

When minorities get sick, they're likely to show up in an emergency room because they don't have anywhere else to go. When they get there, they're usually sicker because of the delay in seeking care. As the New England Journal study showed, minorities are more likely to get a doctor who isn't board certified and is of lower quality.

In 2002, the Institute of Medicine issued a sobering report about health disparities in America. In that report, the IOM challenged assumptions by asking one very hard question: Do doctors treat minority patients differently? Its answer, after reviewing more than 100 studies, was yes, "evidence suggests that bias, prejudice and stereotyping on the part of health care providers may contribute to differences in care."

Most of these studies adjusted for differences in incomes, age, insurance status and disease severity. In other words, the only factor that contributed to the disparity in treatment was the color of a patient's skin. Studies show that African-Americans in general harbor suspicion toward the medical community, a feeling that may lead some blacks to decline or refuse recommended treatments. But the IOM determined that this couldn't account for the severity of black-white disparities.

Over the past decade, there's been a growing body of evidence to support the IOM's conclusion. A 2000 study demonstrated that doctors rated black patients as less intelligent, less educated, more likely to abuse drugs and alcohol, more likely to fail to comply with medical advice, more likely to lack social support, and less likely to participate in cardiac rehabilitation than whites, even after income, education and personality characteristics were taken into account.

Researchers have also found that African-Americans with chronic renal failure are less likely than whites to be offered information and a referral for a kidney transplant. They've learned that blacks are regularly undertreated for pain from fractures and cancer, and are less likely to be prescribed appropriate medications for certain psychiatric problems.

Doctors are sworn by their oath and bound by law to treat patients equally. Most of us got into this business because we wanted to do right by people. Race, class and gender aren't supposed to influence us. But it would seem something is amiss when we treat black patients.

To figure out why, a group of Harvard Medical School researchers turned the spotlight on doctors. The researchers took a group of 287 doctors and administered a computerized test. Called the Implicit Association Test (IAT), it has been around for a decade, and has been used over 5 million times as a tool to measure implicit biases, as opposed to outright prejudice. In this case, the test subjects were shown pictures of black or white patients. They were asked about the person's attitude ("good" vs. "bad"), as well as their impressions of the person's general cooperativeness and medical cooperativeness.

It turns out the doctors didn't harbor any overt bias or prejudice. But the results of the IAT and the outcome of the heart attack scenario told us something quite different: More doctors subconsciously attributed negative traits to blacks (thinking them "uncooperative" or "bad") than whites. Worse was the way these biases translated into clinical decisions. While doctors diagnosed more blacks with a heart attack, they ended up prescribing treatment for blacks and whites in essentially equal numbers, meaning that black patients having heart attacks were going untreated. Further, as the degree of bias toward blacks increased, so did their likelihood of not getting treated.

This study, published last summer in the Journal of General Internal Medicine, was the first hard evidence that doctors' clinical decision making is influenced by race, and that those decisions stand to do harm.

Does this mean that doctors are racist? No. In fact, the discrepancy between explicit and implicit biases in the Harvard study suggests the opposite. But it's clear deeper biases exist, and for several reasons.

First, and most important, doctors are people. There's plenty of evidence that well-intentioned people, whatever their background, possess and demonstrate unconscious negative racial attitudes and stereotypes. Doctors are no different. We share many common conceptions about race in America. We bring those influences, right or wrong, with us to the office.

The second reason lies in the roots of the medical thought process. Every day, doctors and other health professionals make a lot of serious and complex decisions, usually without all the information we need to be certain about them. Many of these decisions are made under intense time pressure. To cope, we rely on intellectual and emotional shortcuts -- ones that help to clarify things. We learn to think in terms of stereotypes; for example, in pediatrics, a child with a fever and an earache is likely to have an ear infection. It's likely that an adult with chest pain radiating to the left arm is having heart attack. In our library of shortcuts, we include "data" on stereotypical patients as well -- an overweight person is at risk for high cholesterol and diabetes; Asians are at higher risk for stomach cancer; African-Americans are at higher risk for asthma. We know these things to be true based on studies of disease patterns.

The paradox here is that: race, age, gender. Are we putting those factors too far in front of other factors in how we treat or don't treat our patients? Have culture and how we think led us to apply stereotypes detrimentally? This would seem to be the case.

The environment in which a doctor trains may also lead to biases. Many teaching hospitals are in tough urban areas where patients may be poorer, less educated minorities. Here's how that might play out in a resident's experience. Every day, he may see patient after patient who can't or won't take his advice on how to take care of asthma. Reasons for that may include anything from a lack of money, a lack of understanding or suspicion about medicine. Seeing those patients get sicker and sicker, and show up again and again in the emergency room, is bound to be frustrating. So after the 100th patient, he may conclude "these types of people just won't take my advice." He's then a lot less likely to bother or care about offering that advice to the 101st patient.

All of this is another example of why race in America is so hard for this country to face. Whether we're talking about your doctor, your congressperson or your neighbor, racial bias is hard to beat because so many times it's hard to even feel. In medicine, these biases clearly exist, they are clearly doing harm, and they need to stop.

It's certainly a good thing that we in the medical profession have checked ourselves on this issue. Training in cross-cultural competence is under way, although many emphasize that the training needs to be conducted carefully to help physicians understand and respect diversity rather than simply reinforce cultural stereotypes. Diversifying the workforce -- not just doctors, but in all of healthcare -- is something that many see as a long-term solution. A study funded by the W.H. Kellogg Foundation, chaired by former Health and Human Services Secretary Louis Sullivan, concluded that while blacks, Hispanics and American Indians make up more than 25 percent of the U.S. population, they constitute only 9 percent of the nation's nurses, 6 percent of the doctors, and 5 percent of the dentists. Medical schools continue to recruit minority students; although, according to the report, progress has been slow for African-Americans over the past decade.

In its 2002 report, the Institute of Medicine pointed to regulatory and policy changes that enforce the use of clinical practice guidelines to ensure doctors treat all patients in a standardized manner. In fact, there has been a proliferation of standardized guidelines in all fields of medicine. For example, those of us who are pediatricians have a clear idea, based on the best available evidence, as to how to treat a child with either chronic or acute asthma, regardless of anything -- like a child's age or the severity of disease -- other than clinical data.

At the same time, despite plenty of research in the past decade about health disparities, there's been precious little political or policy headway in making sure that doctors and healthcare workers address them. Maybe that's because we in the profession are trying hard to solve these issues on our own. Or maybe it's because nobody's watching.

Regardless, the first step to change has been in recognizing that racial biases exist and are affecting the quality of healthcare. As the Harvard study showed, healthcare workers, before completing the test on racial bias, were asked whether or not they agreed with the following statement: "Subconscious biases about patients based on their race may affect the way I make decisions about their care without my realizing it." Before the test, 60 percent of doctors said they agreed. Afterward, 72 percent agreed, and 75 percent said that taking the test would improve their care. Too bad the results weren't 100 percent. But it's a start.