Tina Fey and Amy Poehler make a dynamite duo, but this spoof of our child-centric culture doesn't go as far as it could. 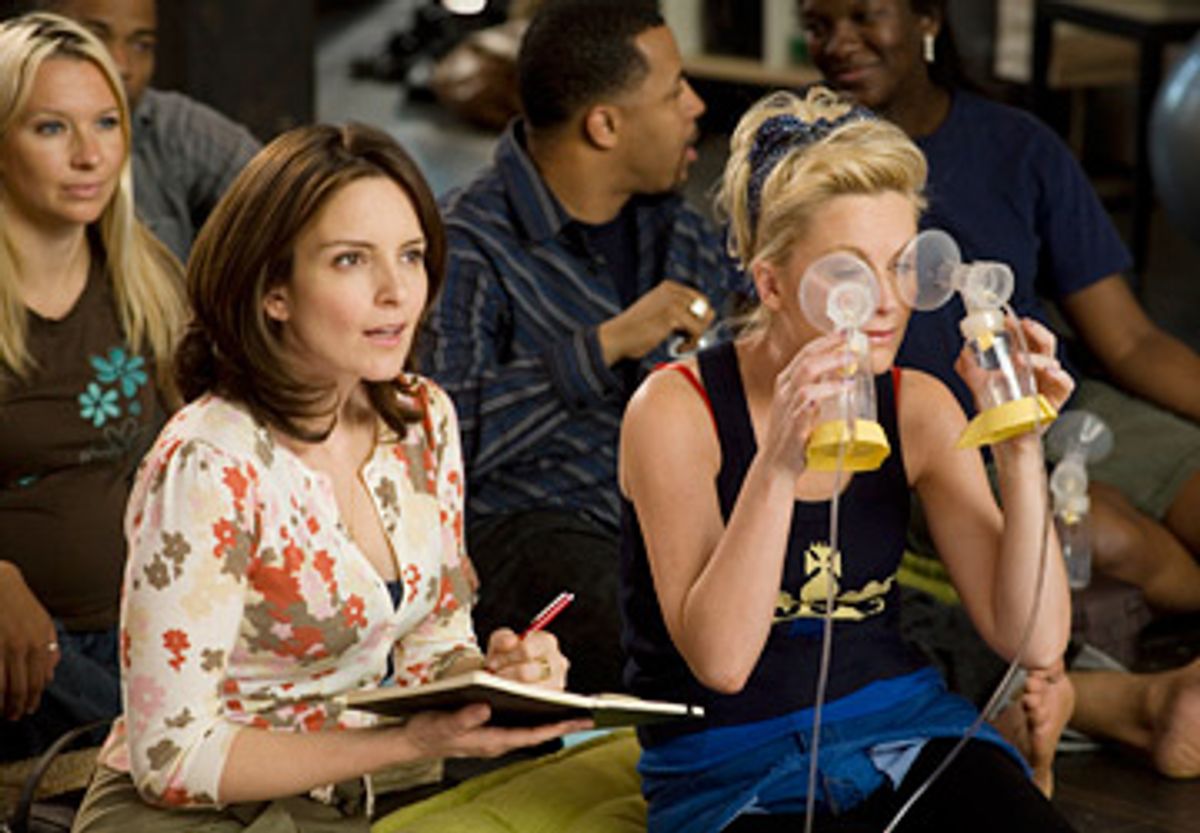 It's funny enough when Sigourney Weaver shows up in "Baby Mama" as the serene, wool-crepe-clad CEO of the Chaffee Bicknell Surrogacy Center -- she's the company's WASP namesake, and Tina Fey's Kate Holbrook, a single 37-year-old woman who wants a child but hasn't been able to conceive, has come to see if Bicknell's "outsourcing" organization can help. But when Bicknell's assistant hands this stunning but clearly post-menopausal woman a gorgeous infant -- one that, she assures Kate, she and her husband conceived the old-fashioned way -- her face takes on the beatific smugness of a Flemish madonna. With that thin little smile, Weaver's Bicknell captures the air of superiority that certain women like to lord over those who have not been blessed with the ability to lay the golden ovum: You're not a real woman until you've popped one out.

That's one of the sharpest moments in Michael McCullers' "Baby Mama" -- which kicks off the Tribeca Film Festival, in New York, on Wednesday, and opens nationwide on Friday -- an essentially sweet-natured picture that doesn't go as far as it could in satirizing both our child-centric culture and the fact that, now that there are so many scientific advances to help people conceive and bear children, sometimes the basic desire to have a baby can turn into a desperation bordering on mania. The movie is sometimes conventional to the point of being formulaic, as if McCullers -- who also wrote the script -- didn't want to take the chance of offending those obsessed with childbearing: It used to be that people who were unsuccessfully trying to conceive found the disappointment too painful to talk about; now it's often all they can talk about, a phenomenon "Baby Mama" only hints at. And there are too many places where the score (by Jeff Richmond) works too hard to cue emotion: There's something wrong when the music in a comedy sets off a buzzer, even a faint one.

"Baby Mama" is less about conception-mania -- or the stage that invariably follows it, baby obsession -- than it is a romantic comedy, a picture about two people who fall into a kind of love with one another only to fall out, ultimately finding a deeper, or at least more realistic, connection after they've reckoned with each other's flaws. But even if the picture is softer than it needs to be, it still resists devolving into something warm and squishy. McCullers, a "Saturday Night Live" alum who also co-wrote, with John Ridley, the marvelous and unjustly overlooked comedy "Undercover Brother," as well as two of the "Austin Powers" movies, may not be able to give the movie the structure it needs -- in that way, he's a bad parent to his own creation. But he is good at writing, and shaping, discrete moments, and he understands the strengths of two lead actresses, Fey and Amy Poehler, who plays Angie Ostrowski, the pixie-blond from the proverbial wrong side of the tracks who, for a fee, is enlisted to bear the child Kate can't.

The gags here are rather basic, consisting mostly of riffs on the little altercations and squabbles that pop up between Kate, a straitlaced good-girl who works as a V.P. for a big health-food chain, and Angie, who never met a can of Dr. Pepper she didn't like. Angie, after breaking up with her western-shirt-wearing, Corvette-driving husband (played, with exaggerated believability, by Dax Shepard), moves into Kate's tastefully appointed Philadelphia apartment, which puts her right under Kate's watchful eye: She seizes the cigarettes Angie shouldn't be smoking; she holds up, with exasperated disapproval, a can of Red Bull.

Fey is a terrific comedienne, in addition to being a gifted writer of comedy, and here she passes the ultimate test: She gracefully accepts the mantle of straight woman, because Poehler, whose eyes shine with a perpetually nutso glaze, needs a straight woman. The two work together beautifully: The slightly nerdy Fey clearly takes pleasure in Poehler the wild card, and Poehler knows enough not to push a good thing. She keeps her character from going over the edge of craziness, which may be why, when she's caught peeing in Kate's elegant sink (she can't negotiate the newly installed baby lock on the toilet seat) the look on her face -- that of a startled lemur -- is what's funny. The peeing is incidental.

Unlike so many comedy directors, McCullers doesn't have any trouble coming up with good gags for his second bananas. In fact, the best bits in "Baby Mama" come from its numerous guest players, like Steve Martin, as Kate's aggressively tranquil, white-ponytail-sporting health-food guru boss. (At one point he "rewards" her with five minutes of eye contact.) Siobhan Fallon is a birthing teacher with a speech impediment. (She beams at her students, mostly hetero couples, before fixating on Kate and Angie, singling them out as "wesbian wuvvers.") And then there's Weaver's Bicknell, an overachiever and an overconceiver, parading her accomplishments before the rest of the universe. She's the big mama of "Baby Mama," even though, as Kate puts it, her eggs are "from the '40s." She's an expert at the miracle of birth. This really is Ripley's Believe It or Not.