At her victory party in Philly, fresh talk of fundraising, Florida and a future in the White House. 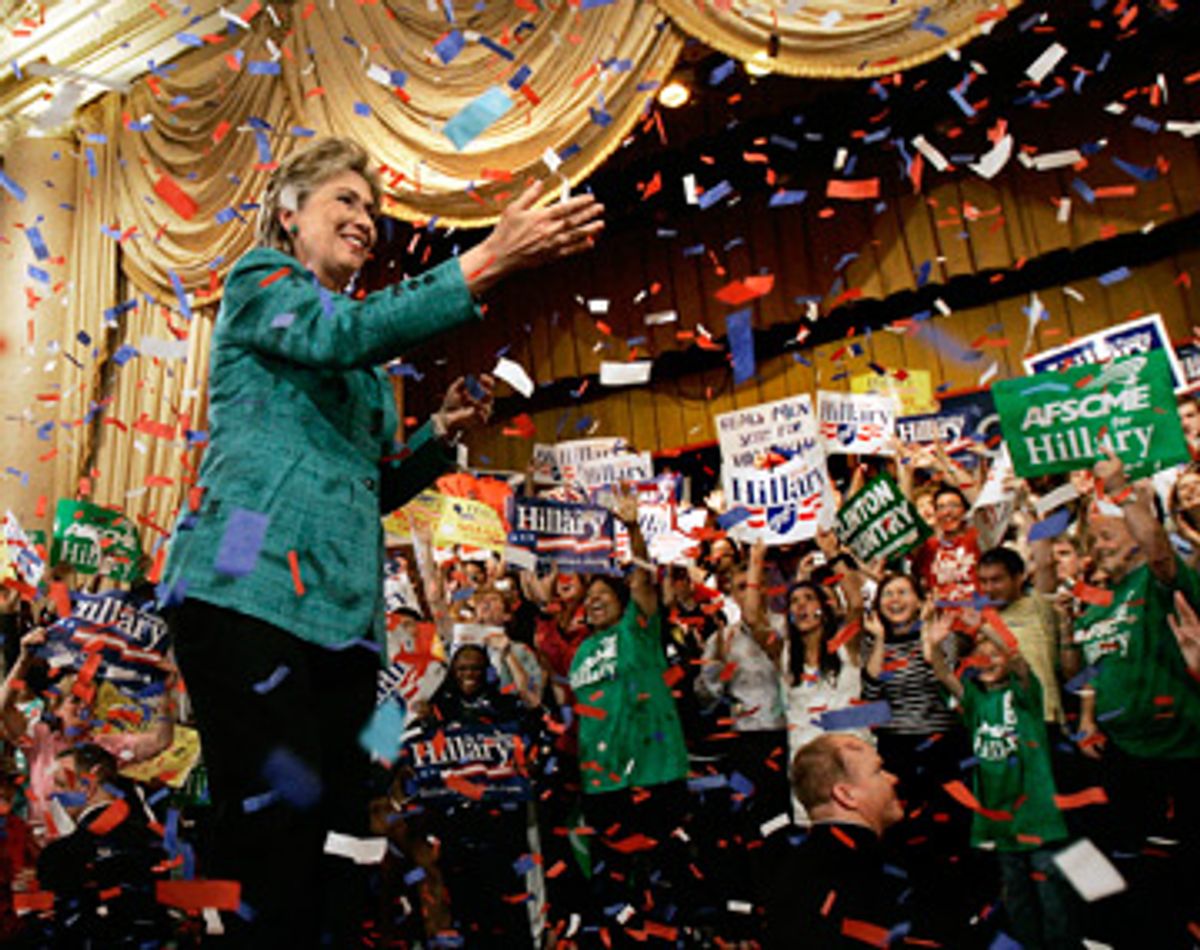 If Hillary Clinton plans to keep up her bionic quest for the Democratic presidential nomination -- and after Tuesday's Pennsylvania primary there is no doubt she will -- she really should get her supporters on the same page with their chanting. At Clinton's victory party at the Park Hyatt at the Bellevue Hotel in Philadelphia on Tuesday night, the overstimulated, overwarm and underdrunk crowd couldn't seem to get it together about how, exactly, they wanted to riff on Barack Obama's "Yes We Can" mantra. In recent weeks, Clinton supporters have adopted "Yes We Will," but in the sweaty couple of hours spent waiting for poll results to come in, those here dispensed with niceties and just started yelling "Yes We Can, Yes We Can, Yes We Can!" with no apology for plagiarism. Until, that is, one knot of vocal women added an embellishment. "Yes She Can" they shouted over the crowd, and smiles spread across faces as supporters got it -- the rhyme, the gender reference, all in one neatly co-opted package.

Another big swing state, another week spent sweating it out and another night on which Clinton -- who still trails Obama in pledged delegates, mathematic possibility and endorsements by major musical acts -- demonstrated that yes she can, and will, stay in this race until the fat lady has sung, showered and gone to bed.

In Pennsylvania, unlike in previous contests in which she clawed her way back from a crumbling electoral precipice, a victory of some size was expected. This one was not marked by the same euphoric letting out of held breath that followed her wins in New Hampshire, on Super Tuesday, and in Texas and Ohio. We are deeper into this race, and camp Clinton needed this night to have a forward-looking narrative. And so she offered a template for total White House domination, complete with the notion (perhaps premature, certainly forced) that Pennsylvania had picked not simply a primary winner but a presidential nominee, and a fresh campaign playbook in which the focus is on fundraising and Florida.

The Clinton campaign's confidence about Tuesday's results had been clear in recent days, especially on Monday night when the whole Clinton family appeared in front of 8,000 people at the University of Pennsylvania's Palestra basketball arena. Given the collegiate context of the rally (Clinton was endorsed by Penn's Daily Pennsylvanian newspaper), it was not surprising that the crowd was bigger, younger, more male and less white than any her campaign had seen in some time. (It was, however, surprising when the crowd briefly sang along to the marching band's trombone-heavy rendition of Bon Jovi's "Living on a Prayer.")

But the added juice of youth and brass helped buoy Clinton and her band of Pennsylvania elves, including Ohio Rep. Stephanie Tubb Jones, local Congress members Joe Sestak and Allyson Schwartz, Gov. Ed Rendell and the wildly popular Philadelphia mayor, Michael Nutter, whose support has been key to her success in Pennsylvania. "I will never ever, ever be able to thank this mayor enough," Bill Clinton had said about Nutter.

On Monday, Tubb Jones had predicted that "the people of Pennsylvania are going to choose the next president of the United States." Chelsea Clinton had opined that her mom would be a better president than her father because "she's not only more progressive but more prepared than he was." Bill had performed an extra-long soft-shoe as he waited for his wife's plane to arrive. "I'm about to commit candor," he'd said, before presenting the crowd with a brief Hillary hagiography and some down-home political aphorism: "If somebody tells you you oughtta quit it's because they're afraid you won't," he'd said, and "if somebody tells you you can't win it's because they're scared you can."

The whole thing had felt like a slightly cocky warm-up for Tuesday's bash.

On previous, dicier primary evenings, Clinton's top aides had remained out of sight until victory became apparent, usually at the last minute. But you could tell that the mood was looser when, less than an hour after the close of polls, Terry McAuliffe was spotted wandering the hall outside the grand ballroom and promptly pinned to a wall by a mob of ravening reporters and their recording devices.

The same fate awaited New Jersey governor Jon Corzine, who had no sooner agreed to talk to the press than he was surrounded by a writhing ring of cameras and elbows. Corzine did not sound like a man who'd just seen his candidate cough up a too-little, too-late victory, but like a guy who was putting in his tux order for inauguration balls in January. Corzine wasn't simply dreaming of good Clinton showings in Indiana and West Virginia next; he was saying, "You've got to count Michigan out, but remember that there is a 300,000-vote plurality in Florida that if I were a superdelegate, I wouldn't ignore." It helps that Corzine is a superdelegate.

Corzine retreated behind a press barrier, where he stood with Sestak, Schwartz and Nutter, looking nervously at the line of hungry reporters, until the VIPs migrated into the ballroom and onto the stage, where they congratulated themselves, Clinton, Pennsylvania voters and one another on delivering victory for Clinton. "This is a woman who, because of her tenacious personality and because of her resilience, fits Pennsylvania like a glove," said Sestak, adding, "I can't wait till next January." Nutter took the chance to throw every cliché in the book at his presidential pick, assuring the crowd that "the comeback kid, come-from-behind, every-day-and-in-every-way Senator Hillary Rodham Clinton is back."

Nutter also brought up Michigan and Florida, receiving huge applause for his assertion that Democrats "don't leave votes on the table; we don't disenfranchise people; we're the Democratic Party; we don't leave people out, we bring people in!"

When Rendell took the stage, he hammed it up by pretending to receive a phone call from a local news team alerting him to "an earthquake so large it shook up American politics!" Rendell also crowed to "all those people who were talking about a shrinking margin [of victory over Obama] -- it's 10:15 and our margin is growing!" He assured the crowd that as Clinton travels on from Pennsylvania "by executive order of a mayor and former mayor, she can use [the] Rocky [theme music] anytime, anywhere." (That's good news for Clinton, who, after the losses of Obama guys Bruce Springsteen and John Mellencamp, seems to have run into the arms of Tom Petty. Tuesday's fete featured "American Girl" -- with its Clinton-tastic lyric "God it's so painful/ Something that's so close/ And still so far out of reach" -- and "I Won't Back Down.")

Finally, Clinton took the stage to give an efficient speech that relied on her arsenal of promises about creating "green-collar" jobs, ending No Child Left Behind and "George Bush's war on science," and revamping education and health research "from autism to Alzheimer's."

She also made an open plea for money, telling her frenzied fans that she can't continue to compete with an opponent "who keeps outspending us so massively" -- and directing them to her Web site. "The American people don't quit, and they deserve a president who doesn't quit," she said.

Clinton wound down her speech with an Obama-esque riff on the historical and cultural context of this race, noting that it was in Philadelphia where the American Founders declared independence, though "neither Senator Obama nor I were included" in their vision. Thanks to abolitionists, suffragists, unionists and all those who have marched and protested, Clinton said, "I grew up taking for granted that women could vote, my daughter grew up taking for granted that children of all colors can go to school together," and now children will grow up "taking for granted that a woman or an African-American can be president."

In her continued quest for the presidency, she promised, "I might stumble, I might get knocked down, but as long as you stand with me, I'll get right back up again" -- an image that no doubt evokes some kind of phantasmagoric Weeble (they wobble but they don't fall down) for Obama supporters already recoiling at Clinton's ineluctable march toward Denver.

Noting that the question is not "whether we can" but "whether we will keep America's promise," Clinton also conjured up a world in which "words will become promises and hope will become reality ... my answer to anyone who doubts is 'Yes ... we ... will.'"

Well, we'll see. But in Pennsylvania, at least, oh yes she did.