Here's one way to exploit people's fear of flying: Tell them airlines are saving money by skimping on fuel. 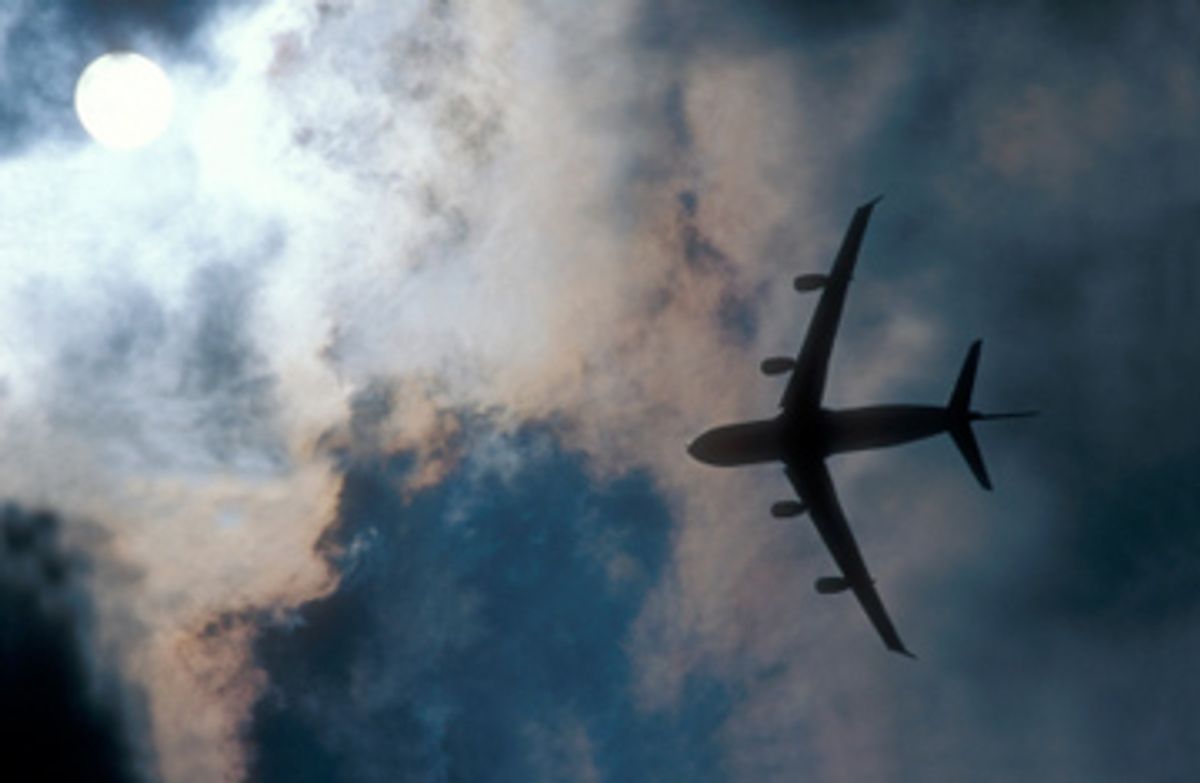 MSNBC.com was responsible for a splashy and alarmist story last week accusing airlines of unsafe fuel practices. According to reporters Alex Johnson and Grant Stinchfield, flights are routinely being dispatched with reduced fuel loads, resulting in potentially dangerous situations when these flights are hit with delays and holding patterns.

It is true that carriers are, in some situations, cutting back on the carriage of extra fuel, which is heavy and therefore expensive to haul around. A fleetwide optimization helps them save money. Note that term: extra fuel.

We've been through this before, but here's a review:

Determining how much fuel will be carried on a given flight is a somewhat scientific undertaking, with hard-and-fast rules. Crews do not ballpark the load with a cursory glance at a gauge, as you might do in a car before a road trip. The numbers are wrangled backstage, so to speak, by an airline's dispatchers and flight planning staff. Intended routing and altitude are balanced against wind and weather conditions to formulate a minimum legal carriage. This amount cannot be arbitrarily reduced. The regulations get complicated, particularly on international routes, but a good place to start is with the U.S. domestic rule: You cannot take off without enough fuel to reach your intended destination, then proceed to the most distant of any required alternative airport (one or more might have to be designated, in accordance with forecast weather minimums), plus maintain a 45-minute cushion on top of that. Once under way, both the pilots and the dispatchers monitor the totals. The latter receive periodic updates via radio or automatic data-link transmission. Remaining fuel is compared with predetermined target values as the flight progresses.

Fly to your destination; fly to your alternative; and fly for an additional 45 minutes. You cannot -- cannot -- depart with less. Trust me, no airline that wants to remain in business asks its crews to do so. And if it did, no captain who wants to keep his or her license would agree. Payload permitting, however, you are welcome to depart with more than is legally needed. A fatter margin gives you greater flexibility, or holding time, in the event of unexpected delays. It's this above-and-beyond fuel that airlines are cutting back on, not regulatory fuel.

It stands to reason that more gas is better than less. It provides greater time to troubleshoot problems or to wait out airborne holds, postponing the need to divert. But while cutbacks allow less wiggle room, they are not dangerous. The penalty isn't crashing, it's having to divert earlier than you'd like, resulting in hassles for passengers and crew.

It's important to emphasize that although legal authority for a flight is shared between the captain and the dispatcher, if the captain is uncomfortable with the intended fuel load, he or she can request more. As the article accurately explains, dispatchers will sometimes challenge these requests. Dispatchers are trained and licensed professionals, and have every right to seek an explanation. It's part of their job.

"With all due respect, the captain does not have discretionary authority to add as much fuel as he would like for every flight," says a dispatcher with a major U.S. carrier. "At our company, crews can add up to a set amount without requiring a revised flight release. Beyond that, it needs to be a joint decision. My biggest gripe is when a captain calls for additional fuel before he has even driven to the airport, before having checked the weather or seen the paperwork yet!"

Having been employed at five different airlines over the past 18 years, I can assure you that the pilot-dispatcher relationship is rarely a hostile or confrontational one. Authors Johnson and Stinchfield draw from several anonymous reports that would seem to contradict this, but they are lacking context. Take it from somebody familiar with the politics and personalities typically found at airlines: These gripes are not as worrying as they sound on the surface.

"If I feel a crew is asking for an excessive amount of add fuel, I can document it in the shift log," says the dispatcher. "But I think I've only done that once."

At the end of the day, no captain will be penalized for desiring more fuel, and no crew will be forced to accept what it believes to be an insufficient amount. Meanwhile, criticizing carriers for not skimping on "extra" fuel seems at best a backward approach. If the existing protocols are truly inadequate, pilots and their unions can lobby the Federal Aviation Administration to change them. But as the vast majority of pilots will tell you, the guidelines are ample.

Different versions of this story pop up every now and then. Last November, ABC news came up with an even more egregious exposé. Reporters seized on the expression "minimum fuel," overheard in conversations between pilots and air traffic controllers. The term also comes up in the Johnson-Stinchfield report. "Minimum fuel" sounds scary to the layperson, but has a specific definition for crews. Basically, it means that a flight cannot accept further delay without burning into its reserves. It does not imply an emergency. (It can, however, be a burden for air traffic control, as pointed out in an April 17 Wall Street Journal report about an increased number of minimum-fuel incidents at Continental Airlines. Controllers are obliged to offer priority handling to aircraft in a minimum-fuel situation.)

Much of what gives this latest article traction is the manipulative way that it's packaged. "Pilots Claim Airliners Forced to Fly With Low Fuel" was MSNBC's alarmist headline. Even worse, "Airlines Fly With Not Enough Fuel," sang the lead on coauthor Grant Stinchfield's blog site. "The story I did on Airline Pilots [sic] complaining that their airlines were forcing them to fly with 'Minimum Fuel' requirements is now getting national attention. I am happy MSNBC.com is featuring the story that has peaked [sic] the interest of lawmakers in Washington."

(I love it when reporters take the time to congratulate themselves, yet make it impossible to contact them. My queries to Stinchfield and Alex Johnson, placed through MSNBC, went unanswered.)

No offense to these correspondents' other journalistic endeavors, but exploiting people's fear-of-flying anxieties isn't difficult. Anytime the words "airlines" and "fuel" appear in the same story, people will pay attention. Regrettably, they are not always given the best information.

Onward now to our next target, the Associated Press. In my column a week ago, I briefly criticized the AP for its coverage of the recent air crash in Congo. "Dreadful," was how I described it. That was a bit much, perhaps, but for the record ...

First, the main cabin door of a DC-9, or any other jetliner for that matter, is not "the cockpit door." The main cabin door is typically found on the forward left side of the fuselage. Most of you, and that presumably includes AP reporters, are familiar with this door, since it's the one through which passengers, along with the crew and anybody else who has business on the plane, board and disembark. The cockpit door on the other hand ... Does this really need explaining?

Elsewhere in the same article were some oddly rendered quotes and descriptions, including one from "a former pilot" who'd survived the accident. There was talk of a "flat tire," and an engine that had reportedly failed "as the plane taxied down the runway." As presented, none of this makes any sense. A flat tire, trouble with an engine while taxiing, and somehow 40 people are dead?

I think the article was trying to say that the plane may have suffered an engine problem as it accelerated toward takeoff (not while taxiing), followed by one or more tire failures when the pilots attempted to stop. Instead of coming safely to a stop, the Hewa Bora Airways DC-9 went barreling off the end of the runway and burst into flames.

Per regulations, runway distance must always be enough so that a plane can accelerate to its calculated takeoff speed, then come safely to a stop should trouble -- such as an engine problem -- warrant. The required length will vary flight to flight, depending on weight, winds and other factors, but stopping distance is always assured. However, one or more tire blowouts following any high-speed aborting can substantially reduce braking effectiveness. This might not be a problem on longer runways, but if the available distance is marginal to start with, the ability to stop within the remaining pavement is no longer guaranteed.

To help deal with this possibility, many runways have emergency stopways that extend beyond their thresholds, and a growing number feature crushable-barrier overrun zones. But many do not. Of Africa specifically, a follow-up piece from the Associated Press made the point that "some African airports have short runways." John Eakin, an aviation safety consultant, reminds us that "often you don't have overruns or safety margins." Well, that's indeed true, but lest we unfairly demonize commercial flying in Africa more than is necessary, it's also true that plenty of commercial airports in the United States have short runways lacking overruns.

For additional reading on runway hazards, refer to my prior columns covering accidents in São Paulo, Toronto and Chicago.

AP coverage also reminded us that Hewa Bora Airways had recently been added to the European Union's airline blacklist, banning the company from operating into E.U. airports. "According to an AP count," the story continues, Congo "has suffered at least 20 other fatal plane crashes since 1996. Most of the aircraft are aging planes from the former Soviet Union."

A few things here. First, and for what it's worth, Soviet-designed aircraft are commonly described as aging or obsolete even when they're not. But more important, crash counts like the one above fail to distinguish between legitimate airlines and other, quasi-commercial operators (including those shadowy outfits whose principle business is smuggling weapons and other contraband) -- companies that are not "airlines" as most people understand them. And it's mostly these lesser outfits that make up that E.U. blacklist. The majority of names on the list belong to companies that wouldn't be flying into Europe anyway.

No, air travel in Africa is not as safe or reliable as it is in other parts of the world. But that alone can be misleading. When the difference between a "safe" airline and an "unsafe" one is determined by one or two incidents spread over thousands, or even millions, of departures, those distinctions aren't terribly meaningful. Virtually no carriers are outright hazards, and all of them offer a safer alternative to driving. Ethiopian Airlines, South African Airways and Royal Air Maroc are among well-respected names with excellent reputations. Tunisair has never had a crash. Air Zimbabwe has been accident-free since the 1970s. (You might recall my experience flying in Ghana, published in this space a year ago.)

Be that as it may, and speaking of marginal airlines, Russian clunkers and too-short runways, it's worth noting that the Hewa Bora crash was neither the most deadly nor the most infamous overrun accident to strike Congo. In 1996, an Antonov freighter careened off the runway at Kinshasa's Ndolo airport and slammed into a crowded market, killing upward of 300 people. (Though one of the worst-ever crashes in terms of fatalities -- a precise death toll was never determined -- everybody on the airplane survived.) It is also one of the few air disasters to be commemorated in a work of art. "Catastrophe de Ndolo" is the oil-on-canvas rendition by Congolese painter Cheri Cherin.