It's time for the GOP to finally repudiate the creator of the infamous Willie Horton ad, who is back smearing Obama. 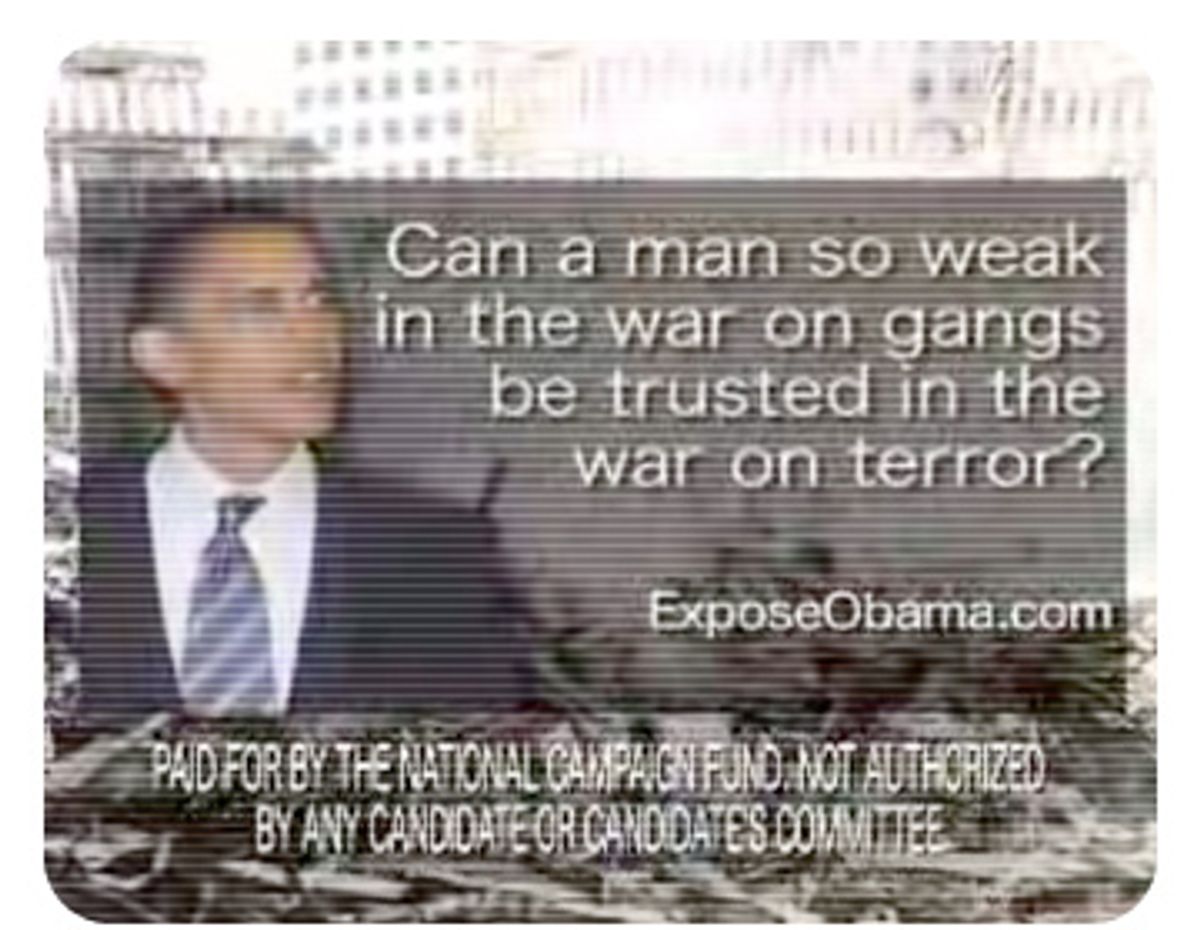 There is nothing remarkable in the sudden reappearance of right-wing con man Floyd Brown, whose latest venture is an inflammatory television ad now airing in North Carolina that attempts to blame Barack Obama for gang murders in Chicago (and international terrorism, too). Nobody familiar with Brown would expect him to resist smearing an African-American presidential contender.

He has given conservatism a rank smell for two decades -- and if there is a racist odor to the coming general election campaign, it is likely to emanate from his vicinity. True to form, according to Time magazine's Michael Scherer, Brown has promised to follow his hit on Obama with an ad designed to inflame animosity toward illegal immigrants.

What is remarkable about Brown is that no matter how much America changes, he does not. He not only survives but thrives, cycle after cycle, playing the same ugly game that first won him notoriety in 1988, back when he scripted and televised the flagrantly inflammatory Willie Horton ad. He lurks on the fringe of presidential politics because the Republicans tolerate and sometimes secretly encourage him, so long as they can claim that they have no connection with his schemes. Those denials have always been implausible -- and as he ramps up for a new season of divisive attacks, the question is whether the mainstream media will give Brown the kind of scrutiny he deserves.

Most news articles about Brown, such as those reporting on his new ad against Obama in North Carolina, have dutifully recalled his responsibility for the Horton ad, which featured the frightening mug shot of a stereotypical 1980s urban marauder (complete with sullen expression and scruffy, uncombed Afro hairstyle). Although the ad was primitive in message and production values, and ran briefly only on a few cable channels, it effectively framed Democratic presidential nominee Michael Dukakis as "soft on [black] crime." The mug shot surfaced again and again in free media on television and in print, until its blatant provocation reached every susceptible voter.

Meanwhile, Brown and his cronies became rich as well as infamous, operating as an independent political committee called "Americans for Bush" and hauling in millions of dollars from direct-mail and telemarketing appeals. Between 1986 and 1988, the committee's parent organization, known as the National Security Political Action Committee, raised over $9 million, far more than it spent on the cheapo Horton ad or any of its other activities. And while the official campaign committee of President George H.W. Bush eventually complained to the Federal Election Commission about Americans for Bush and denounced both Brown and the Horton ad, its attitude was in truth much more equivocal.

Indeed, the Bush campaign had encouraged the makers of the Horton ad and certainly never made any serious effort to punish or even discourage the group. Two years later, in fact, significant evidence emerged that indicated possible collusion between Brown's gang and the official Bush cohort, specifically between Bush media consultant Roger Ailes, the future boss of Fox News Channel, and Larry McCarthy, the consultant hired by Brown to make the Horton ad. Ailes indignantly denied working with Brown's group, which would have been a serious infraction of election law. Responding to a Democratic Party complaint, the FEC opened an investigation that was eventually killed by a party-line vote of the commissioners before any real conclusions could be reached.

Soon Brown found a new cause in the destruction of the Clintons -- and a new mentor in the person of Jim Johnson, the Arkansas segregationist whose hatred for the progressive young Southern governor dated back to the '60s. Known as "Justice Jim" because he had served on the highest court in the state, Johnson earned permanent status as a symbol of unreconciled racism for his role in the 1957 desegregation crisis at Little Rock Central High School, where "patriots" like him brought worldwide shame to the United States. For years he sought to intimidate blacks and liberal whites in Arkansas as the leader of the White Citizens Council, a country club version of the Ku Klux Klan, whose official newsletter unashamedly referred to "niggers" and threatened violence against integration. He tacitly accepted the endorsement of the KKK's "grand dragon" when he ran for governor in 1966.

"You make me ashamed to be from Arkansas," said Bill Clinton when they met for the first time in 1968. Years later, Johnson made it clear that the feeling was mutual.

To seek out someone like Johnson to plot against Bill and Hillary Clinton revealed a profound flaw in Brown's character. When Brown's Presidential Victory Committee published "Slick Willie," a vicious "biography" of Clinton that accused him, among other sins, of coddling Arkansas blacks, promoting witchcraft and fostering blasphemy, the acknowledgments included a "special thanks" to the aging segregationist. With still more help from Johnson, Brown and David Bossie went on to concoct and promote the Whitewater scandal, reaping immense publicity (and lots of money) from gullible network reporters eager to score a scoop on the supposed corruption of the new president. Few of those correspondents revealed that the inside dope on the Clintons was coming from the dubious authors of the Willie Horton ad and their racist mentor.

As Brown goes about his dirty business this year, yet another Republican presidential candidate can be expected to repudiate him, at least for the record. But if John McCain sincerely wishes to elevate the tone of the general election and reject the politics of division, he will have to do more than issue ritual denunciations. McCain must tell the Republican faithful, including the high-rolling donors who may finance Brown's advertising, that he is a pariah -- and that anyone who underwrites that kind of campaign will be unwelcome in a McCain White House.