Tangled up in Dylan

Suze Rotolo, the musician's first muse, has written an entertaining memoir about their love affair that is also a remarkable portrait of living and making art in the 1960s. 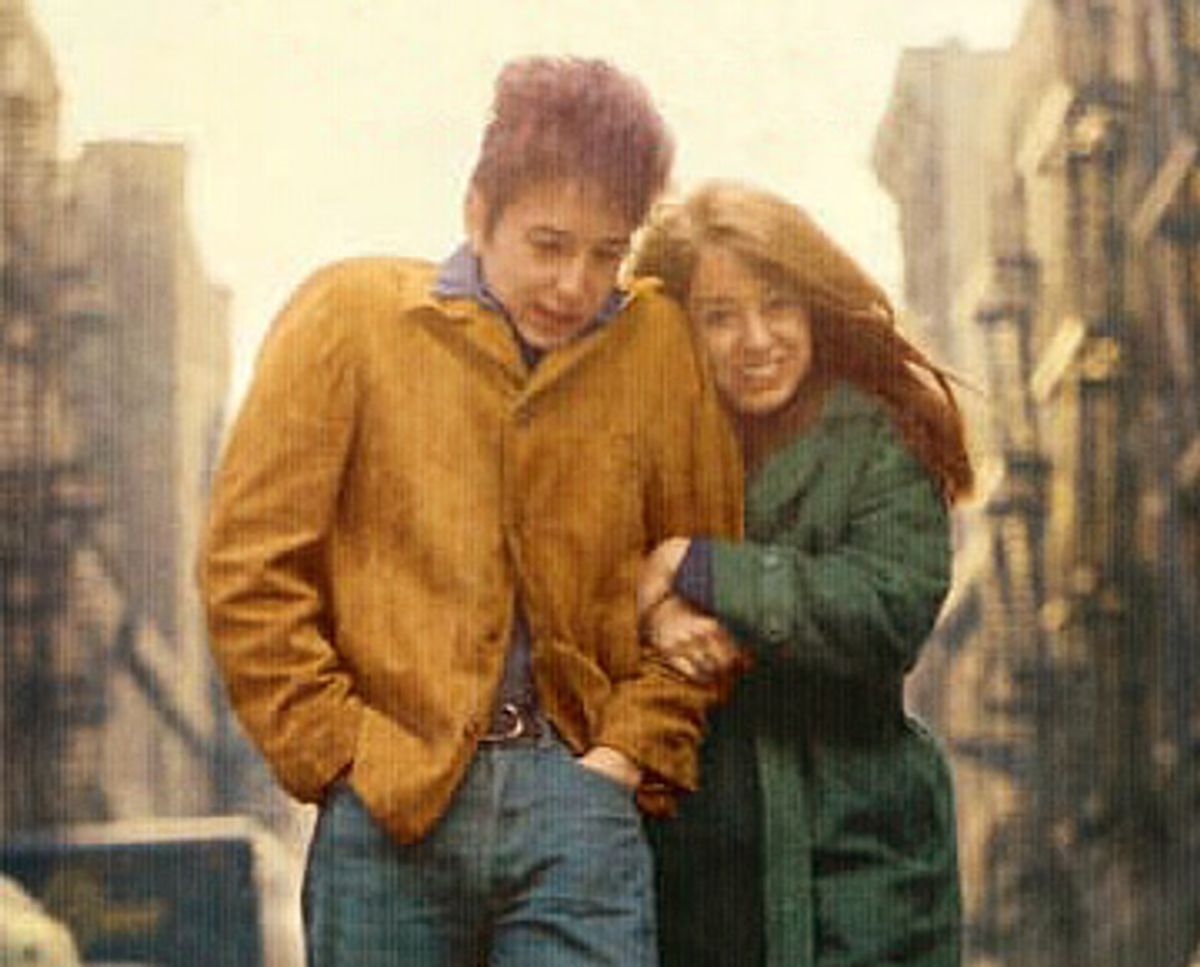 Face it: The art -- or is it more of a science? -- of dissecting Bob Dylan is a man's game. Most of the Dylan scholars (both the smart and the lame ones), the rock critics who have collectively spent several lifetimes wrestling with his lyrics, the civilian gasbags who hold forth at dinner parties whenever his name is even mentioned, are men. I used to have an officemate who, whenever he wanted to take a break from doing actual work (which was shockingly often), would march into my office singing some random Dylan lyric and challenge me to name which song it came from. I know women who love Dylan's music as much as anyone else does, but I've never met one who felt the need to be a walking, talking sack of trivia.

So whether she knows it or not -- and I suspect she does -- Suze Rotolo has taken something of a risk in writing a memoir of the time she spent in the early '60s as the girlfriend of the Great Man. There are going to be people out there who think she's just cashing in on her role as a handmaiden to genius. But "A Freewheelin' Time: A Memoir of Greenwich Village in the Sixties" is only partly about Dylan. Rotolo has written a perceptive, entertaining and often touching book about a remarkable era in recent American cultural history, about a way of living, of making art, that couldn't have happened at any other time or in any other place.

This is about as far from a juicy tell-all as a memoir can get: Rotolo does share some private details of the story of her romance with Dylan -- the two met in 1961, when Rotolo was 17 and Dylan was 20, and were a couple for some four years -- but her approach is so sensitive, discreet and affectionate that she never comes off as opportunistic. This is an honest book about a great love affair, set against the folk music revival of the early 1960s, but its sense of time and place is so vivid that it's also another kind of love story: one about a very special pocket of New York, in the days when impoverished artists, and not just supermodels, could afford to live there.

Rotolo was born in Queens, N.Y., in 1943, the daughter of politically active communists. Her father died suddenly, in 1958, and partly as a way of escaping her rather difficult mother, Rotolo established her independence early on, first taking day trips into the city with friends -- specifically, Washington Square Park, a gathering place for anyone interested in music, poetry and politics -- and eventually moving out altogether. She then lived with her aunt and cousin in Harlem and eventually found an apartment-sitting arrangement on Waverly Place in Greenwich Village. As teenagers Suze and her older sister, Carla, would listen to a country radio station out of Wheeling, W.Va., where they would hear Les Paul and Mary Ford, Hank Williams and the Everly Brothers on the Grand Ole Opry. Later, after moving to the Village, Rotolo would haunt the cheap record shops, buying up blues and jazz albums as well as Harry Smith's collected recordings of traditional folk music. As a young woman with an interest in painting and drawing -- she would later work as a set designer on off-Broadway productions -- she'd decorate the plain white sleeves of these records with her own cover art.

Although Rotolo had heard Dylan perform at a small West Village club, she first met him at an all-day folk festival in July 1961, held at Riverside Church in upper Manhattan: "Whenever I looked around, Bobby was nearby. I thought he was oddly old-time looking, charming in a scraggly way. His jeans were as rumpled as his shirt and even in the hot weather he had on the black corduroy cap he always wore. He made me think of Harpo Marx, impish and approachable, but there was something about him that broadcast an intensity that was not to be taken lightly."

Dylan was, she says, "funny, engaging, intense, and he was persistent. These words completely describe who he was throughout the time we were together; only the order of the words would shift depending on mood or circumstance." Rotolo and Dylan immediately became inseparable, and not long after their meeting she moved into the small walk-up Dylan found on West Fourth Street. The headiest parts of the book detail their time there and the friends they made in the glory days of the folk music revival, among them singer-songwriter duo Ian and Sylvia Tyson and folk legend Dave Van Ronk and his wife, Terri Thal, a leggy, lanky, unconventional beauty who, on hot days, would greet guests at the couple's West Village flat dressed only in a white bra and panties.

Rotolo writes about Dylan's sudden and rapid ascension, but she doesn't underplay her own story, which is engaging in itself: When her mother and stepfather offered her the opportunity to go to school in Italy for six months, she made the wrenching decision to leave her boyfriend behind. (Rotolo includes quotes from some of Dylan's letters to her, which are deeply moving both for their unapologetic silliness and their unvarnished lovesickness.) She also details, conscientiously and without bitterness, some of the issues that led to the couple's eventual breakup. Rotolo, an artist herself, was completely clued in to the sexism of the folk scene (a feature of '60s counterculture in general). She began to shrink from the idea of being a musician's "chick" or, worse, his "old lady." She writes only glancingly of Dylan's romance with Joan Baez, which began when she and Dylan were still a couple: The episode was obviously painful for her, but she doesn't treat it as a major feature of her story. It's possible for women as well as men to be chivalrous, as Rotolo proves.

"A Freewheelin' Time" doesn't begin and end with Dylan: Rotolo also talks about her life after Bob, including an illegal trip she made to Cuba in 1963, as a way of protesting the State Department's travel ban to that country. (Rotolo, raised in a fervently communist household, was sympathetic to communist ideas only to a point; her ongoing questioning of those ideas is a recurring feature of her memoir.) And as the book's title says outright, Rotolo knows that the story of Bob Dylan is inseparable from that of a specific New York neighborhood. In one of the loveliest passages she describes the genesis of the famous photograph that graces the cover of "The Freewheelin' Bob Dylan," an image whose visual and emotional simplicity made it revolutionary, for album-cover art, at the time.

Rotolo describes how Columbia Records sent a photographer to the couple's apartment on West Fourth Street. For the occasion, Rotolo writes, "Bob chose his rumpled clothes carefully." When it was time to go outside for more pictures, he wore a suede jacket, even though it was an extremely cold day. Rotolo wrapped herself in a green coat, which she belted tightly for more warmth. "I felt like an Italian sausage," she writes.

The cover of "The Freewheelin' Bob Dylan" shows an almost unbearably young-looking couple striding toward the camera -- toward the future -- through a corridor of parked cars and tallish buildings laced with fire escapes. There's slush in the street; this is New York in midwinter, after all. The guy in the picture, a skinny, nervous-looking kid, his head topped with a tall pile of curly hair, is instantly recognizable. But the girl, attractive and thoughtful looking, with a wide-open smile, holds the camera's gaze just as intently. Dylan fans, thanks to their stockpile of important trivia, have always known that this woman's name is Suze Rotolo. Now we know more than just her name.